Kezman and Kleeman pace TA3 and TA4 in practice at Sebring

SEBRING, Fla.  [March 3, 2018] —  The Trans Am Series presented by Pirelli officially began its 2018 championship today at Sebring International Raceway with a set of practice sessions—a first taste of Trans Am action for veterans and rookies to the Series alike.   Class fast laps were set by Paul Fix, in the TA class, Rafa Matos, in TA2, Tim Kezman, in TA3, and Brian Kleeman, in TA4.

Paul Fix, in the No. 4 StopFlex/CarCoachReports.com Ford Mustang, led all competitors and the 19-car TA class, with a 2:02.186 lap around the 3.74-mile course.  After a partial season in 2017, Fix returns to Trans Am competition with an eye on the TA class championship with Tony Ave Racing. Across Fix’s Trans Am career he has captured 11 victories, 21 podium finishes and 13 poles in 65 starts.

Following Fix in the TA class was Lawrence Loshak, driver of the No. 2 Pennzoil/ETE/ GoShare Chevrolet Camaro for Burtin Racing, with a time of 2:03.948.  2018 will mark Loshak’s first full season of TA class competition after a TA2 class career that spanned 32 starts.  Defending TA champ Ernie Francis, Jr., in the No. 98 Frameless Shower Doors Ford Mustang, completed the practice session top three with a time of 2:04.279.  Francis set the TA class pole at Sebring last year, a 2:00.981.

In an independent TA2 session, it was Rafa Matos, in the No. 88 3-Dimensional Services Group Chevrolet Camaro, who led the way for the 32-car field, turning a 2:08.388 lap.  Matos will be campaigning full time for the 3-Dimensional Services Group team of Doug Peterson this season.  Matos featured in five TA2 showings in 2017, garnering one podium finish and two top-fives while battling mechanical issues— if those issues are a thing of the past, 2018 could be a banner year for the 3-Dimensional team. 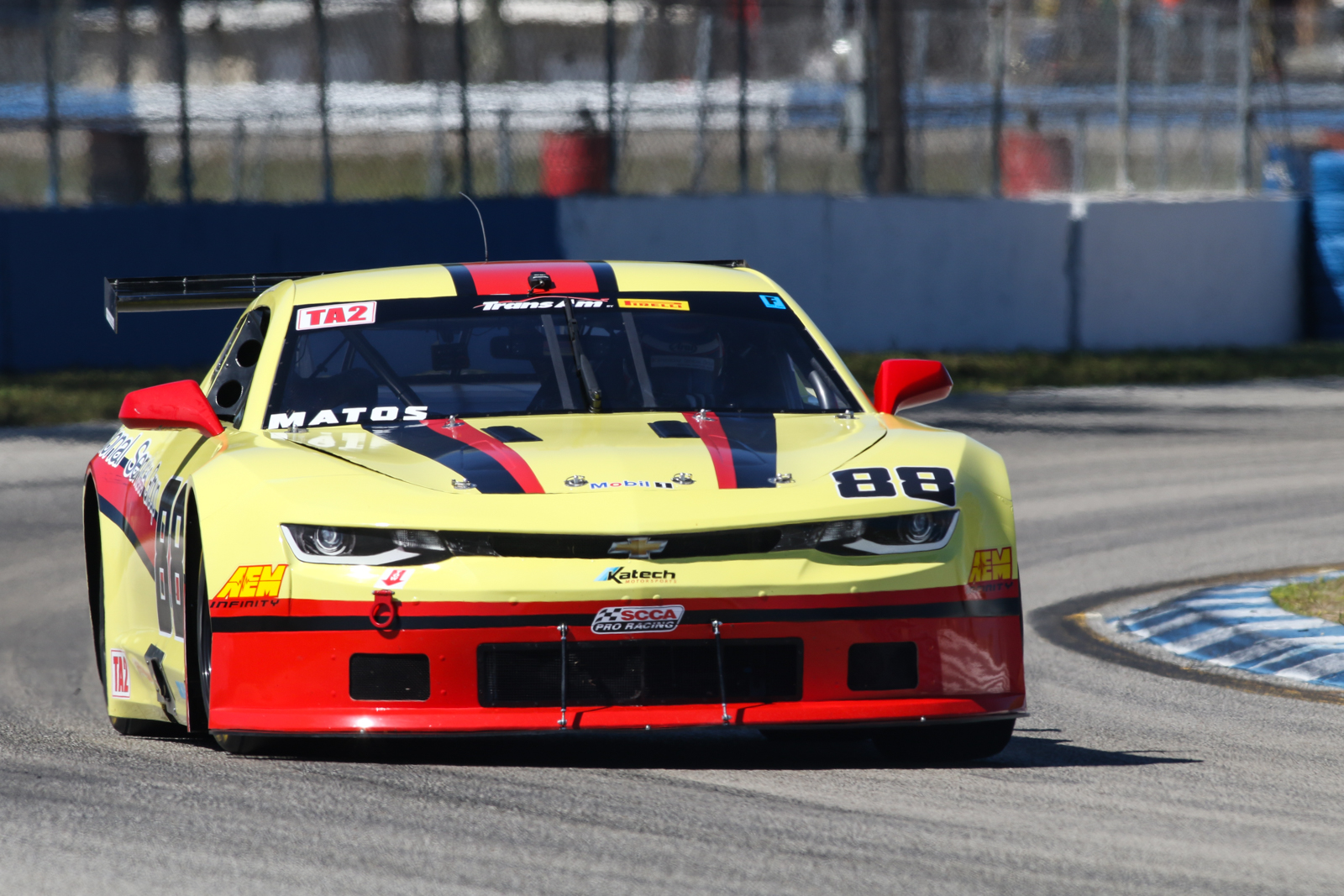 2016 TA2 champ Tony Buffomante, in the No. 34 Mike Cope Racing Ford Mustang, was second quick with a time of 2:08.535. Buffomante finished second in the championship in 2017 and is the winningest TA2 driver of the past two years with 12 victories, 17 podiums and 12 poles to his name. 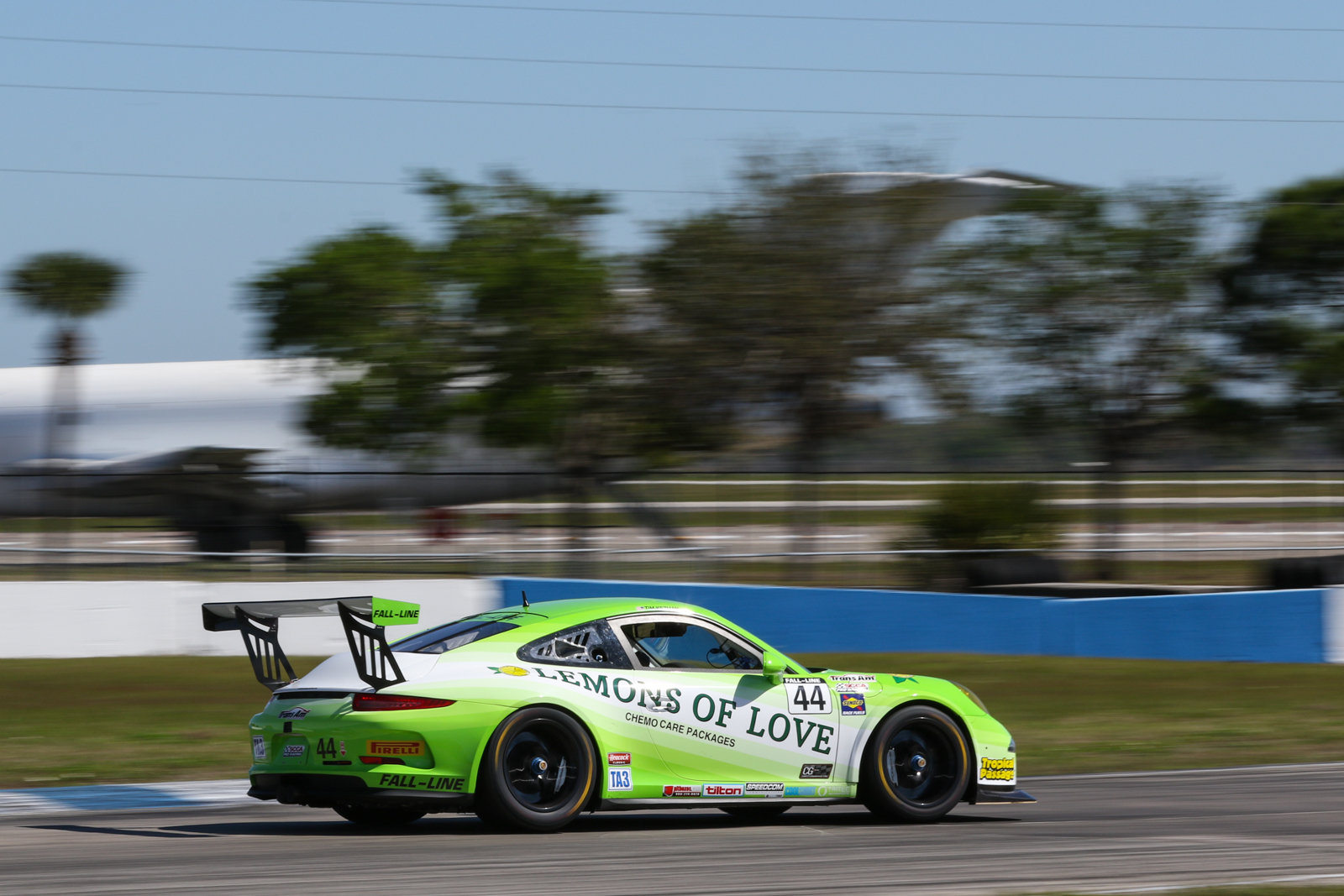 Tim Kezman, in the No. 44 Fall-Line Motorsports Porsche 911 GT3 Cup, set the fast time for the TA3 class with a 2:10.329.  Kezman, last year’s TA3 championship runner-up, will make his 18th career Trans Am start this weekend, already with 6 wins, 12 podiums and three poles over the past two years.

Second quick in TA3 was Randy Kinsland, in the No. 11 RF Engines Chevrolet Corvette, with a time of 2:11.805; while defending TA3 champ Mark Boden, in the No. 46 Fall-Line Motorsports Porsche 991 GT3, was just behind with a time of 2:12.271.  Boden stands as the defending Sebring victor as well, edging out Kinsland for season opening honors last year. 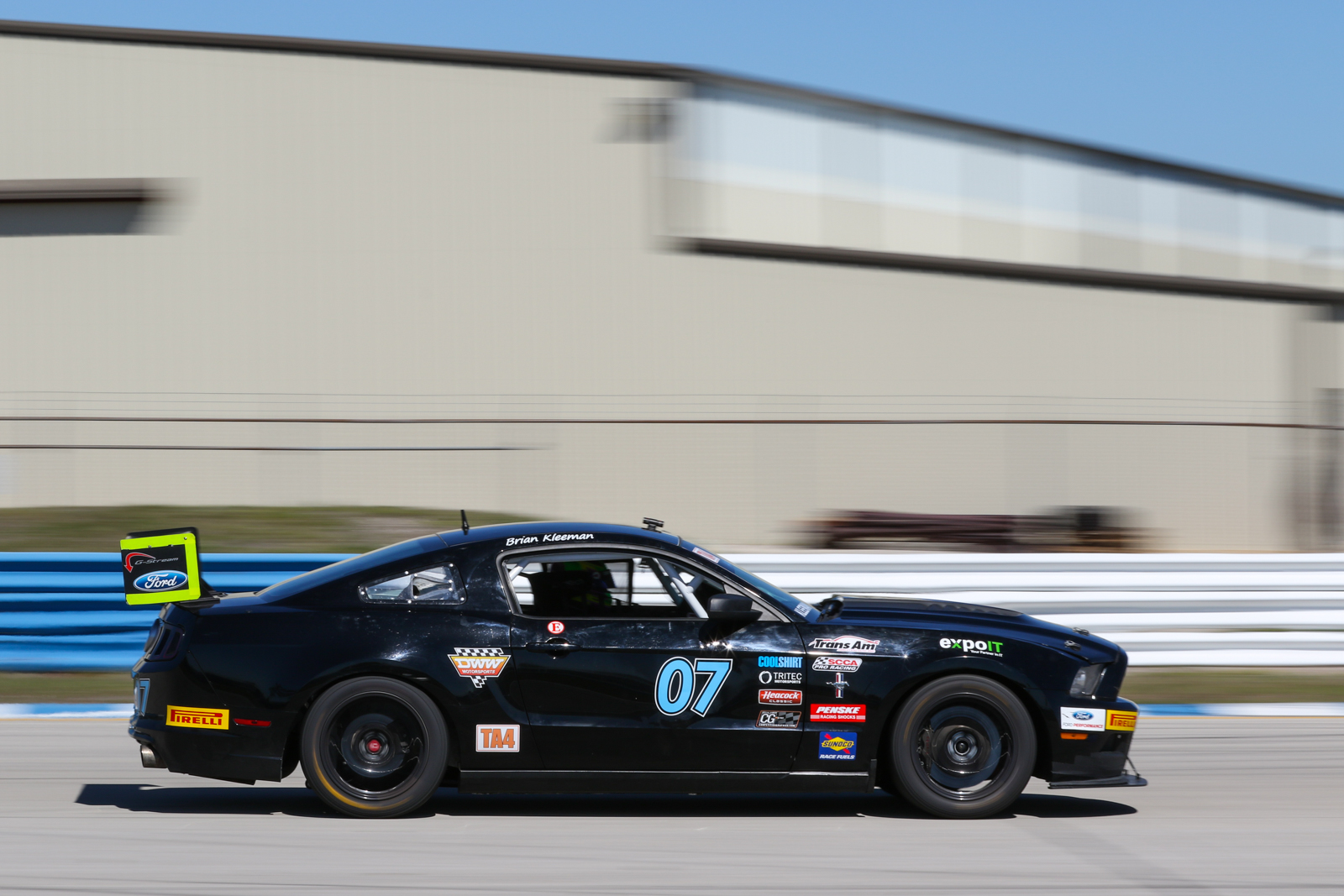 Defending TA4 champion Brian Kleeman, in the 07 DWW Motorsports/Rachtech Ford Mustang, set the class’ fast lap during the session with a time of 2:14.321, just edging the effort of Andrew Aquilante, in the No. 32 Phoenix/ Hawk/ Penske Shocks Chevrolet Camaro, who turned a 2:14.527. Kleeman versus Aquilante has quickly shaped into one of the races to watch this weekend with the two running tight times even during yesterday’s test sessions, adding variety to a class that Kleeman absolutely dominated in 2017 with seven victories.

Third quick in the TA4 class was rookie Ronald Hugate, in the No. 42 Phoenix/Hawk/ Penske Ford Mustang, with a time of 2:15.215; while Chris Outzen, in the No. 09 DWW Motorsports/ itrackzone Ford Mustang, and Steven Davison, in the No. 22 DAVinci Plastic Surgery Aston Martin GT4, completed the class top five with times of 2:20.015 and 2:21.947, respectively.

Trans Am competitors will return to the iconic track at Sebring International Raceway at 4:50 PM ET for qualifying sessions to determine the starting order for tomorrow’s two 110.98, 27-lap  races for Round 1 of the 2018 Trans Am Championship. 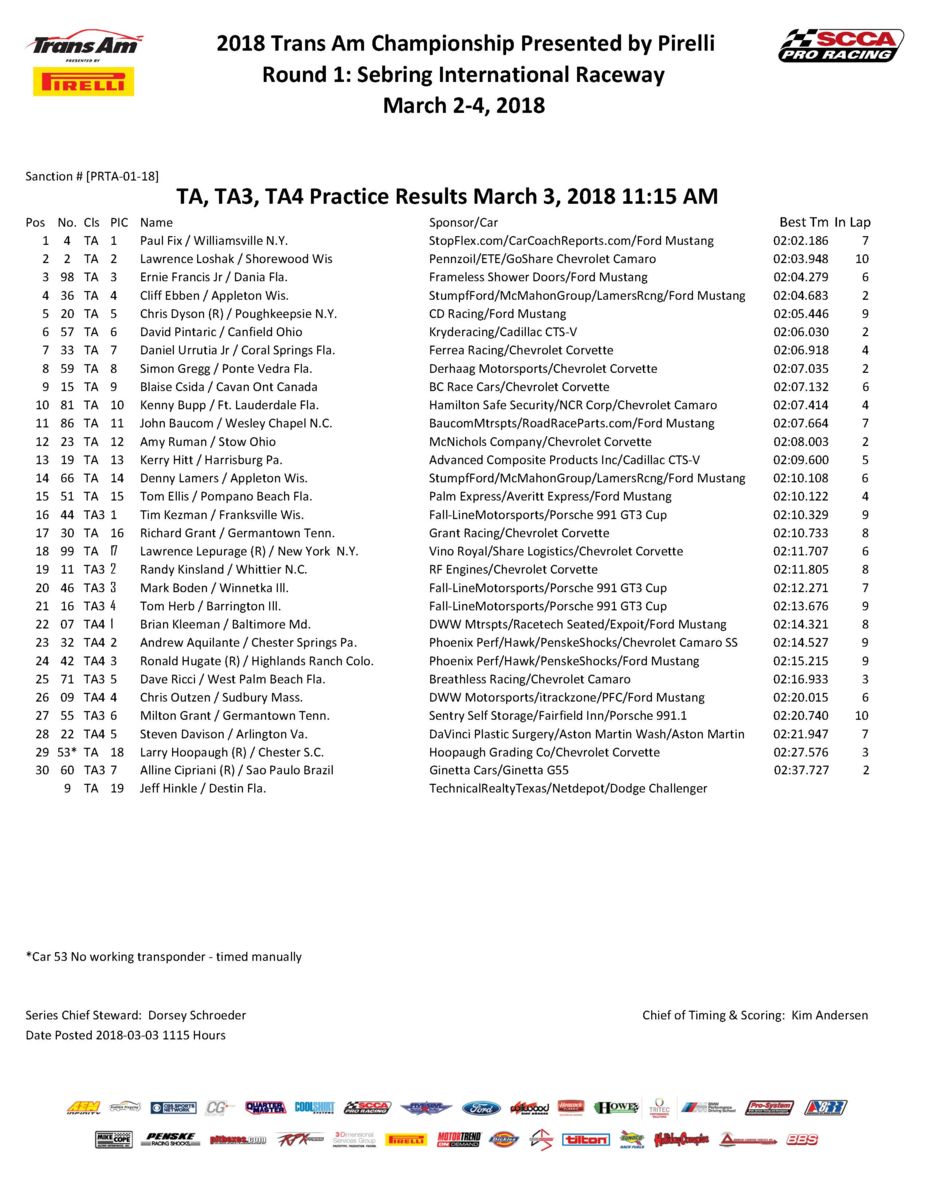 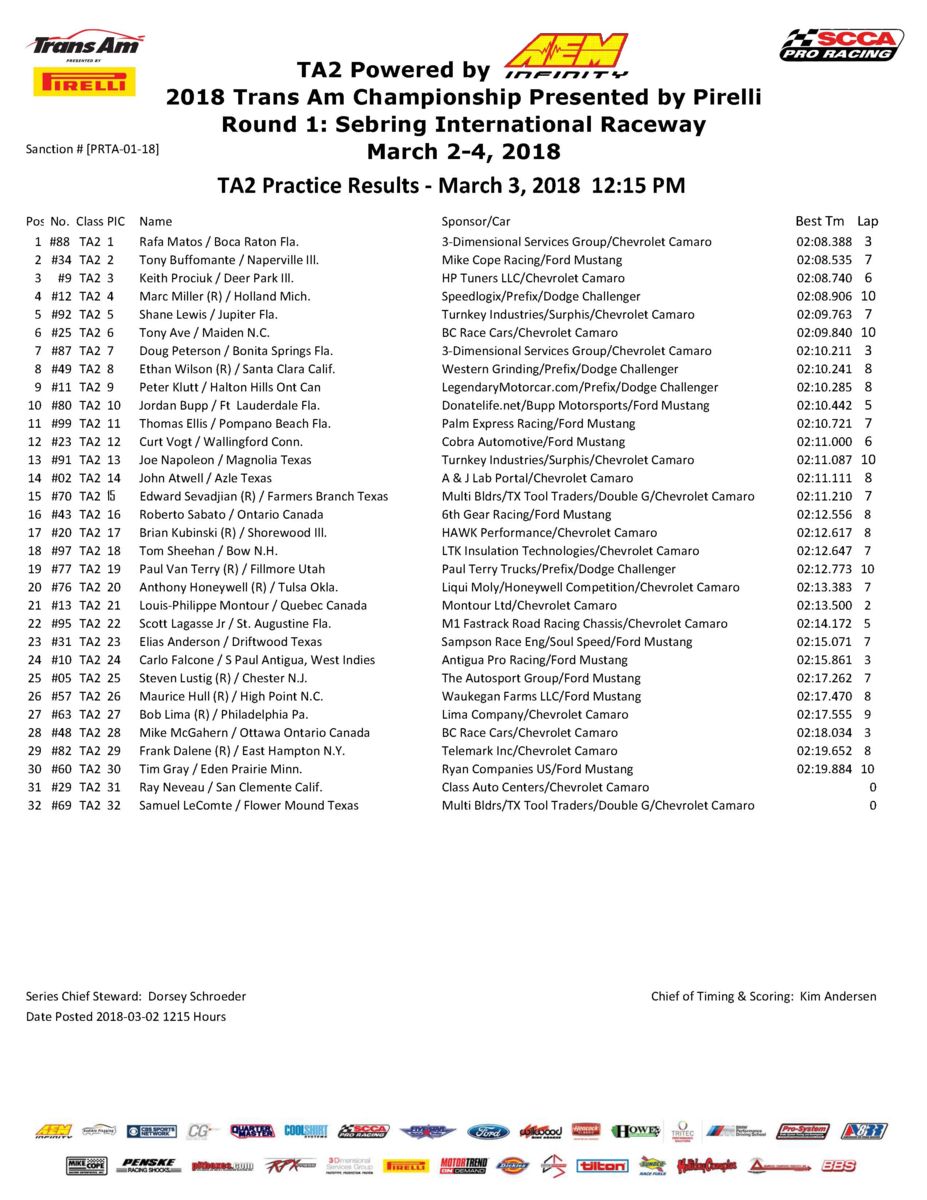 This weekend's event will be showcased in a ten-minute highlight show on Trans Am Series official social media accounts following the close of the event.