DETROIT, Mich.  [June 2, 2017] –  The Trans Am Series presented by Pirelli opened up today’s action at the Chevrolet Detroit Belle Isle Grand Prix, as drivers from the TA and TA2 classes alike made initial preparations for their respective 3-Dimensional Services Group Motor City 100 and this afternoon’s qualifying sessions.

For many Trans Am competitors the session was their first official glimpse of the 2.35-mile Belle Isle circuit, but not so for Adam Andretti, driver of the No. 44 ECC/ Anchor Bolt & Screw Chevrolet Camaro, who set pole for TA2 and claimed a race victory last year in Trans Am’s exhibition race on Belle Isle.   Andretti showcased that expertise in practice, turning a 1:38.032 lap to lead not only the TA2 class, but the entirety of the 24-car field.

Andretti was followed in TA2 by newcomer to Trans Am, but veteran of motorsports, Rafa Matos, in the No. 87 3-Dimensional Services Group Chevrolet Camaro, turning a 1:38.238 in his first official Trans Am session.  Matos brings with him numerous accolades, including both an Indy Lights and Champ Car Atlantic Championship and 2009 Indy Car Rookie of the Year honors.

Defending TA2 champion Tony Buffomante, in the No. 34 Bestline Superior Lubricants Ford Mustang, was third quick for TA2 with a time of 1:38. 824; while Cameron Lawrence, in the No. 19 Class Auto Centers Chevrolet Camaro, and Gar Robinson, in the No. 74 Pura Vida Tequila/ 74 Ranch Resort Chevrolet Camaro, completed the TA2 top five with times of 1:39.082 and 1:39.082. 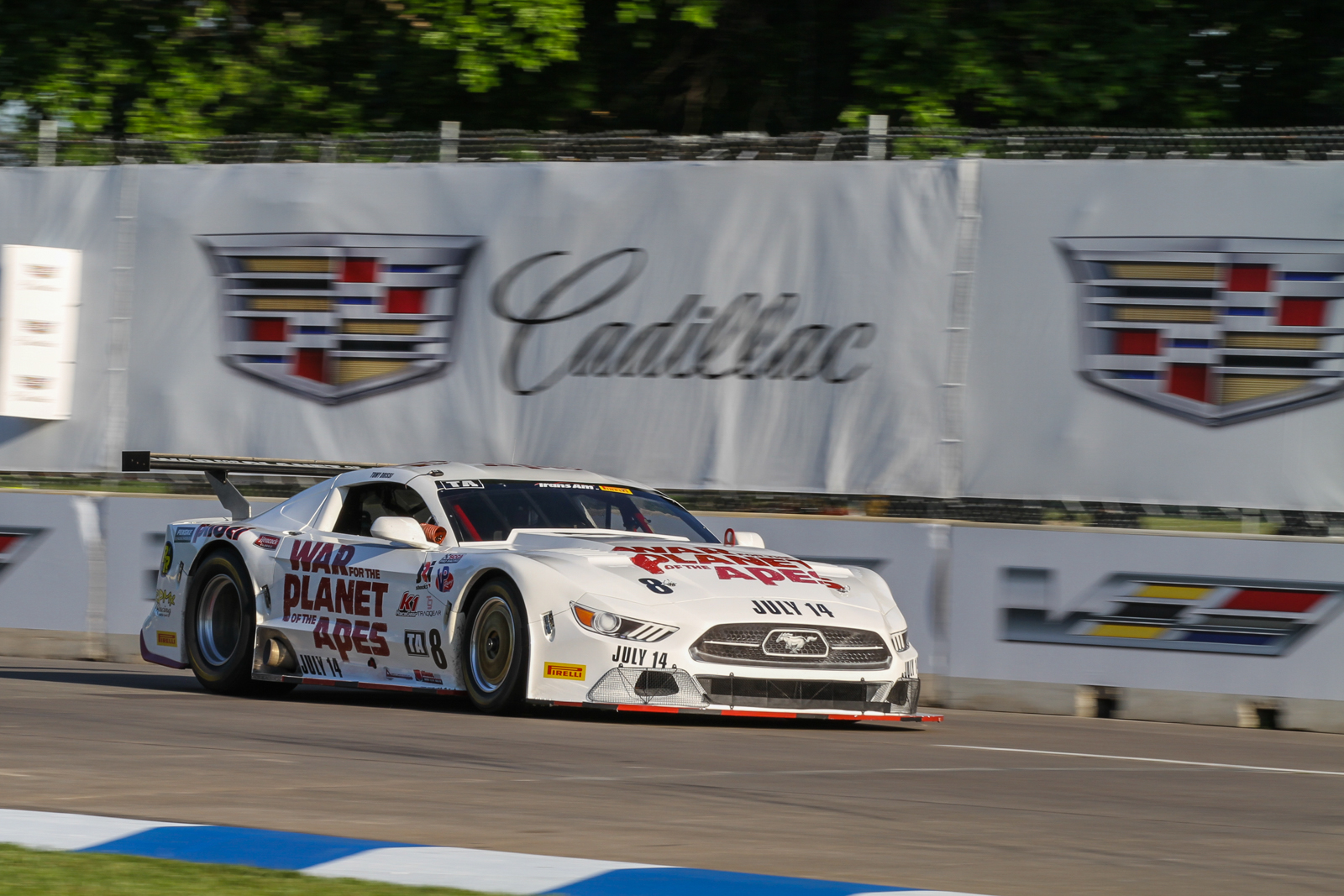 Tomy Drissi, in the debuting No. 8 War for the Planet of the Apes Ford Mustang, would lead the TA class with a time of 1:38.454, battling through traffic and shortened sessions as all TA class machines struggled to get up to speed, falling well short of last year’s race record time, a 1:32.990.

Drissi was followed in the TA class by two-time defending TA class champion Amy Ruman, in the No. 23 McNichols Company Chevrolet Corvette, who turned a 1:38.535 of her own.   Simon Gregg was third quick for the TA class with a time of 1:38.548 from behind the wheel of the No. 59 Derhaag Motorsports Chevrolet Corvette.

Also featuring in the TA class top five were points leader Ernie Francis, Jr., in the No. 98 Breathless Pro Racing/ Beta Tools Ford Mustang, and 2016 TA Rookie of the Year Vinnie Allegretta, in the No. 41 TA Sights & Sounds Chevrolet Corvette, with a 1:39.839.

The practice session went under red flag conditions after the No. 9 GoGoCreate.com Dodge Challenger of Jeff Hinkle impacted the tire wall in turn seven.  The driver was unharmed and the car flat-towed back to the paddock, however the indecent and repairs to the tire wall significantly shortened the session. 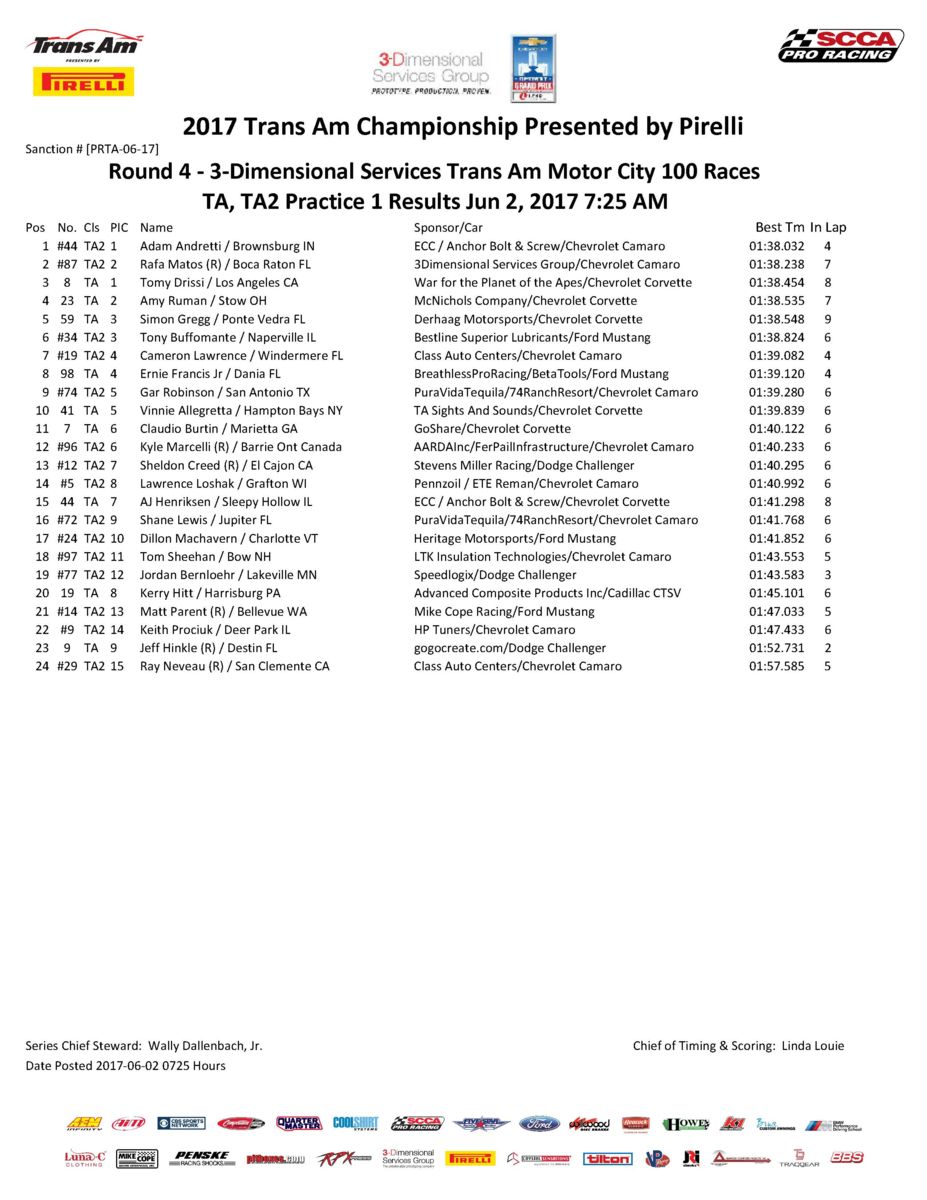