Cliff Ebben secures first Trans Am victory of 2017 at Sebring 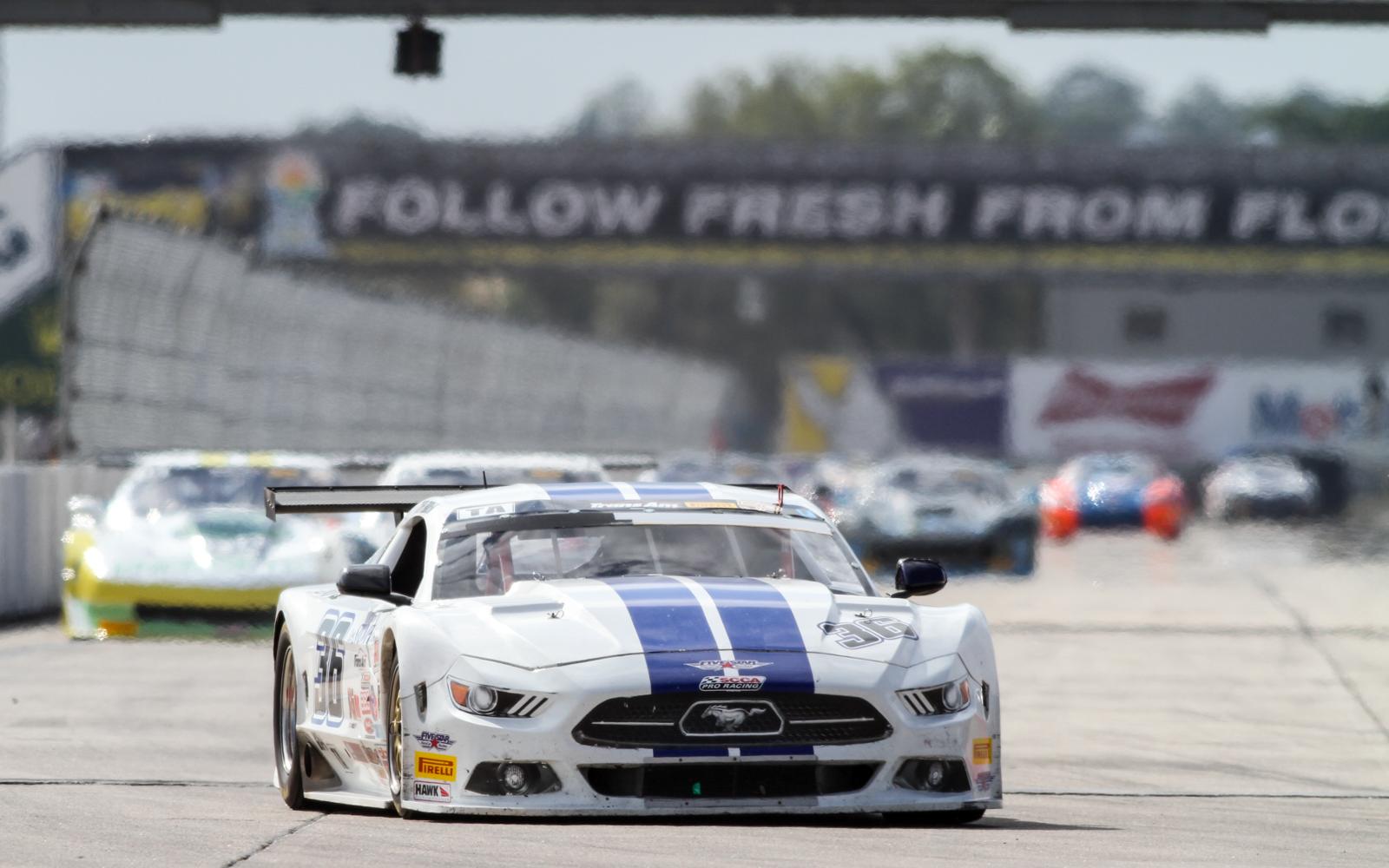 Ebben, in the No. 36 Stumpf Ford/ McMahon Group Ford Mustang, began the day in fourth position in the 22-car field, behind the likes of RJ Lopez, Vinnie Allegretta and pole sitter Ernie Francis, Jr.  Ebben would maintain his speed over the first 16 laps of the race, remaining consistent as the top three dropped back one-by-one with mechanical issues.  Ernie Francis, Jr., would lead those 16 laps building up a lead that spanned over a 12 seconds, before suffering an oil line burst—Francis would shut down the car to avoid damaging the motor.

Ebben would inherit the lead after overtaking Allegretta for second position, a lead he would not relinquish for the remainder of the 100.3-mile, 27-lap race.   The victory, his sixth in 54 starts, is Ebben’s first at Sebring, and in doing so also becomes the first driver of a Ford Mustang to win the TA class at Sebring since Boris Said in 2001.

“It was a pretty straightforward race for me,” said Ebben. “We just kept moving up as the leaders started to drop out, and I inherited the lead! You are better to be lucky than good they say. I would like to thank my car owner Denny and Jan Lamers, Greg, Monty and all the guys on the team, my wife Mary, Competition Specialists, McMahon & Associates and Les Stumpf Ford.”

Finishing second in the TA class was Tomy Drissi, in the No. 8 Ghost in The Shell Chevrolet Corvette, finishing on the podium in his 100th career Trans Am start.   Drissi began the race in eighth position before dropping back to ninth on the second lap, from there on he would work his way up through the field before joining David Pintaric, in the No. 57 Kryderacing Cadillac CTS-V, in an 18-lap battle as they worked their way up through the field, eventually ending in a fight for second position on the very last lap.  Ultimately, Drissi won that battle, securing a second place finish—his 20th career top-three finish.

Drissi’s car had suffered heavy damage during the second practice session of the weekend, but the Ave crew worked throughout the day to restore the No. 8 in time for the TA class qualifying session only five hours later.   For their efforts Tony Ave Racing was named the PitBoxes.com Crew of the Race and Drissi’s Crew Chief Gregory Smyre was awarded the Traq Gear Crew Chief of the Weekend.

David Pintaric would finish third after starting 19th, completing his battle up through the TA field.  However, the No. 57 was found to have an illegal  wing after the race, as a result Pintaric was excluded from the results.

Ernie Francis, Jr., driver of the No. 98 Breathless Pro Racing/ Beta Tools Ford Mustang, set the fast lap of the race with a time of 2:03.502.  Despite the mechanical issues, Francis remained upbeat on his TA class debut this weekend.

“We had a great race going on and lead from very beginning,” said Francis. “We started pulling a pretty big gap and the car was running great with no issues with it until a small oil line burst, we think, and that dropped down the oil pressure. We had to shut it off so we wouldn't blow the motor. I can't thank the team enough; they did a great job on the car and everything was working really well. It was a good weekend, and we really showed we can keep the pace with these guys. If we can keep the car together, I think it's going to be a good season.”

For intentional contact with the No. 03 of Jim McAleese, Claudio Burtin was excluded from the results by the Chief Steward and placed on probation for six Trans Am events. 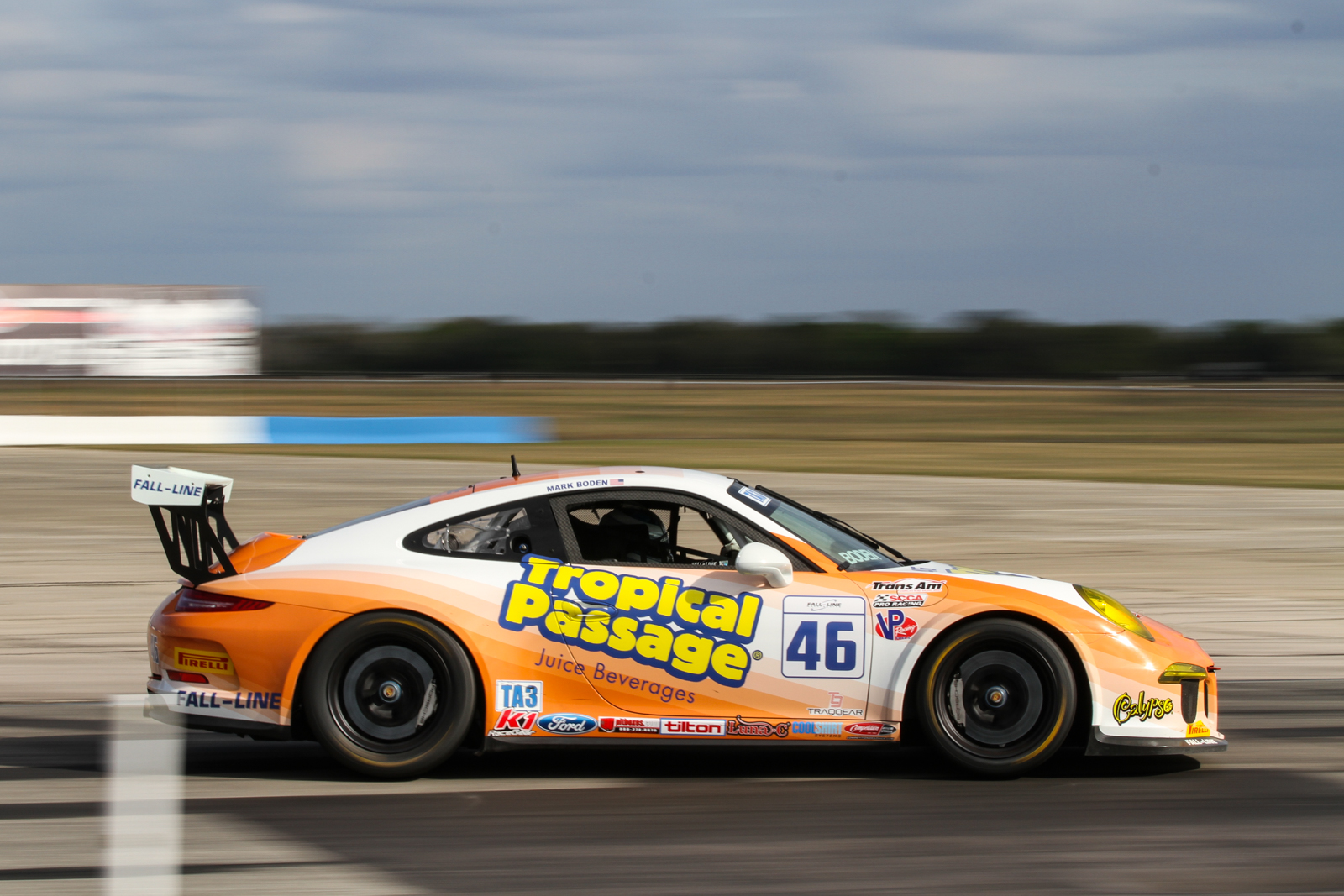 Mark Boden, in the No. 46 Fall-Line Motorsports/ Calypso Porsche 911 GT3 Cup, like Ebben, would come from behind to secure the TA3 class victory.  Boden started fifth, slowly climbing through the class ranks and taking the lead from Randy Kinsland, in the No. 11 Kinsland Racing Chevrolet Corvette, on the 19th lap— a lead he would hold through the conclusion of the race.

“I drove super conservatively,” said Boden.  “The track was changing constantly throughout the race, and what you did one lap wasn’t necessarily what you were going to do on the next lap.  There were so many places where you had to adjust your brake zone, and I was really watching the cars ahead of me and seeing how they were braking— how they were sliding around.  Turn five was just diabolical, so watching cars and seeing how they were sliding around in there was one of the major things I was doing.  It was just a different track every lap.  Getting up front, we didn’t have the power in the Porsche to get upfront on the straightaways, and I’m not making any pitching for BOP here, but we did have the consistency.  And our experience with these Pirelli tires helped deliver that—we just had a little bit better of a car at the end.”

Kinsland would finish second, his fifth TA3 podium appearance on his ninth Trans Am start, while Lee Saunders, who had won the past three TA3 races at Sebring in the No. 84 Landsearch LLC Dodge Viper, finished third.

Conor Flynn, in the No. 95 Irish Mike’s Porsche 997, and Boden’s teammate Tom Herb, in the No. 16 Fall-Line/ Calypso Porsche 911 GT3 Cup, would finish fourth and fifth, respectively.

TA3 class polesitter Andrew Aquilante, in the No. 32 Phoenix Performance Chevrolet Corvette, led the first 10 laps of the race before suffering clutch failure, ending his day. 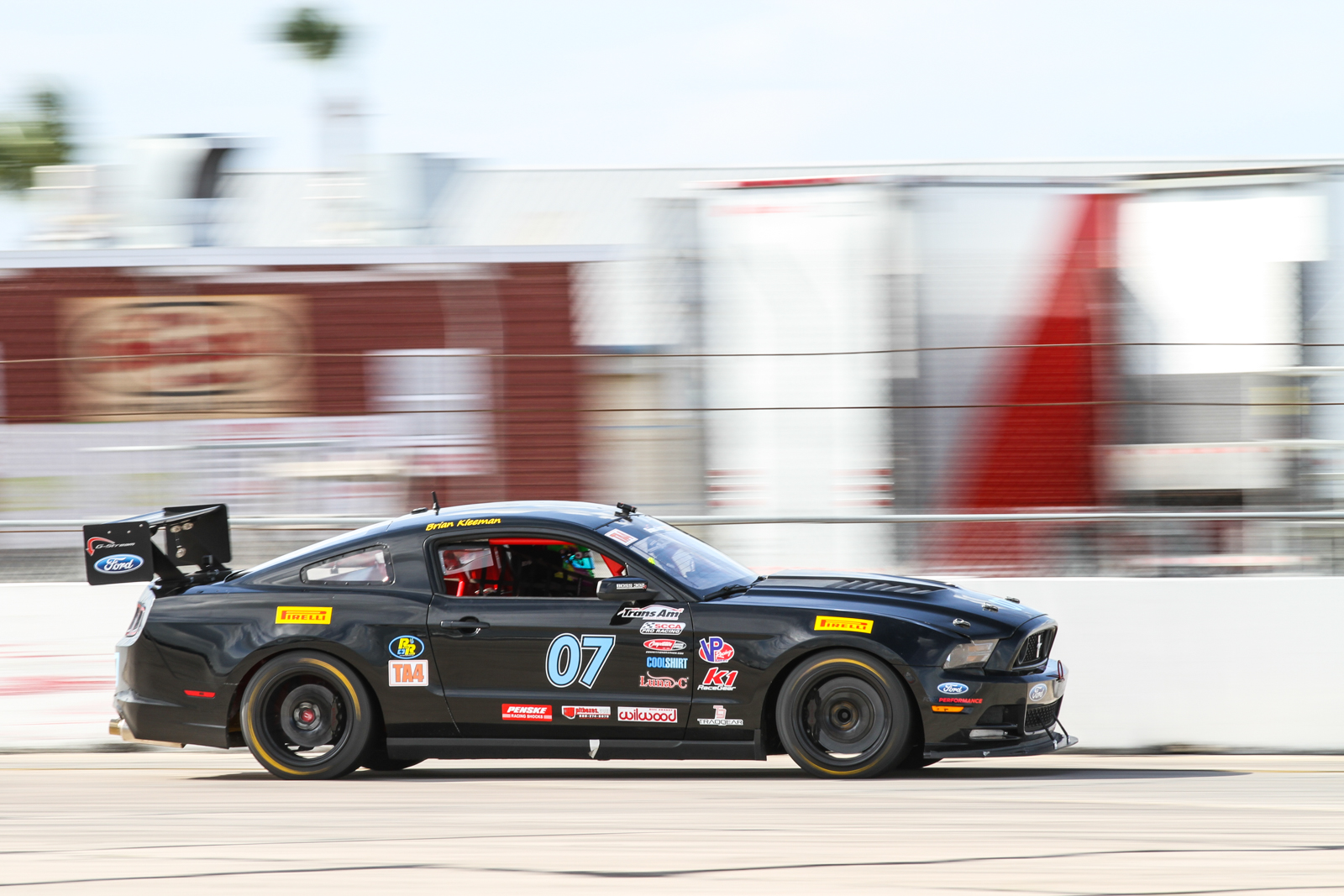 In TA4, Brain Kleeman, in the No. 07 DWW Motorsports Ford Mustang, finally captured his first career Trans Am victory in his eighth career start after finishing on the podium four times prior to this event.

Kleeman began the race on pole and led every lap for the TA4 class, navigating the multiclass traffic and challenges from the No. 39 Chevrolet Performance/ Tremec Chevrolet Camaro of Todd Napieralski and the No. 43 Racer’s Edge Motorsports Ford Mustang of Chris Outzen.

“There was definitely a lot of traffic, so that played a role in our race,” said Kleeman. “It resulted in our lead being cut into at the end.  But the Pirelli tires!  These tires are just amazing.  We’ve got some experience in this car with these tires in a different series, so that really helped out. The DWW Motorsports team has this car figured out and has built this car so we can go out and accomplish things like this.  I can’t wait for Homestead-Miami, hopefully we can get a few more guys to come out and enjoy this, but I’m really looking forward to Homestead and the rest of this year.”

Mike Geldart would finish second in TA4 for the second consecutive Trans Am event, tying a career best finish at Trans Am’s 2016 Daytona Finale.   Todd Napieralski would finish third for his 24th top-three finish.   Mel Shaw, in the No. 22 Bay Commercial Group Chevrolet Camaro, and Chris Outzen, in the No. 97 DWW Motorsports Ford Mustang, completed the top five.

The race also signified the introduction of Pirelli P ZERO™ tires across all Trans Am classes, resulting in track records being set by Lee Saunders in TA3, a 02:09.777, and Brian Kleeman in TA4 with a 02:16.377.

Earlier in the day Trans Am held an independent TA2 class race where Dillon Machavern was victorious.  Gar Robinson and Shane Lewis finished second and third, respectively.  Full results from that race can be found at www.gotransam.com

The Trans Am Series presented by Pirelli will now head to Homestead-Miami Speedway for Round 2 of the 2017 Trans Am Championship on April 9th.  The Trans Am West Coast Championship will hold Round 1 of its 2017 season at Willow Springs International Raceway, March 25-26.

Fans of the Trans Am Series by Pirelli can follow along throughout the weekend at www.gotransam.com, on Facebook at www.facebook.com/gotransam and on Twitter at @gotransam.  Live Timing and Scoring can be found throughout all sessions on gotransam.com and on RaceMonitor.