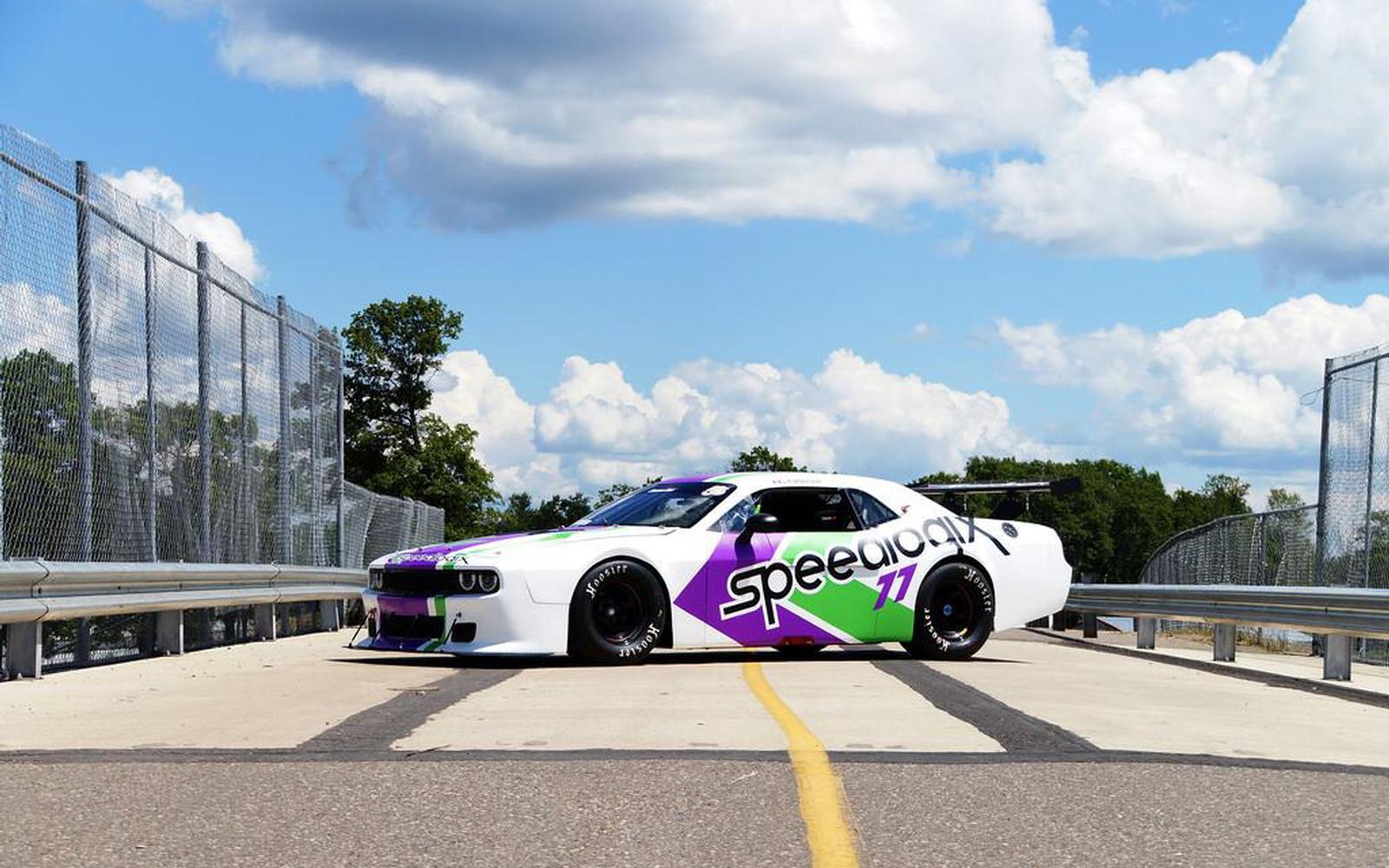 The new Speedlogix #77 Dodge Challenger will first be officially seen on track on Saturday, July 2, 2016 when TA2 practice begins at 10:30 am. The green flag will drop at 1:00 pm on Sunday, July 3rd with live tracking available on the TransAm Series web site. The Ryan Companies Muscle Car Challenge, featuring the TA2 TransAm Series will be broadcast on CBS Sports Network on Sunday July 31, 2016, at 1:00 pm.

“The Speedlogix Challenger looks amazing in the new white, purple and green livery, and the design not only reflects our company colors and the look of our Speedlogix Edition street cars, but demonstrates our level of commitment to supporting racers and enthusiasts who drive Challengers and other Mopar-powered vehicles,“ said Lisa Wall, Founder and Owner of Speedlogix. “We are so excited to be able to continue to support what the Stevens-Miller Racing team is doing in TransAm and look forward to attending several events later this year to bring the aftermarket and enthusiast communities together with the experience of the professional race weekend event. What a way to kick off our 10th year in business!”

Owner of Stevens-Miller Racing Joe Stevens had this to say about the recent partnership with Speedlogix. "Lisa and the Speedlogix brand brings a new energy to the team and undoubtedly drives us towards better results. Supporting this brand is a great honor as we respect the level of commitment Speedlogix demands for its customers and the products they offer." Stevens-Miller Racing fields three TA2 Dodge Challengers and is currently in the Championship hunt with driver Louis-Philippe Montour who is currently 4th overall and leading the rookie points chase. "To put it clearly, our goal is to not only to be the best Dodge TransAm TA2 team, but also to attract the best partners, and with Speedlogix we have done just that."

Louis-Philippe Montour is nearly half way through his rookie year in Trans Am TA2 and had this to say about representing the Speedlogix Racing name. "Speedlogix Racing is a new motorsports brand, and I’m new to the TA2 car, so in a sense we have launched down this path together. This is exciting for both of us as we learn more and more every event. Additionally, our racing collaboration is centered around the Dodge racing enthusiasts, which I have also been involved with for some years having raced in the Viper Cup."

The Speedlogix #77 Dodge Challenger will compete for the Trans Am Championship and driver Rookie of the Year Championship at the remaining 2016 events, as follows:

Speedlogix is the leader in aftermarket performance parts for the Dodge Challenger as well as most other Dodge, Jeep and Mopar-powered performance vehicles. Founded in 2006, Speedlogix sells products from all the leading manufacturers, and has also created a complete catalog of their own performance and appearance products, including a line of billet suspension components and engine dress-up accessories. Speedlogix is headquartered in West Palm Beach, Florida, and their storefront and warehouse is open to the public 6 days a week. Speedlogix also has warehouses in every region of the United States for prompt shipping and delivery to customers here and abroad.