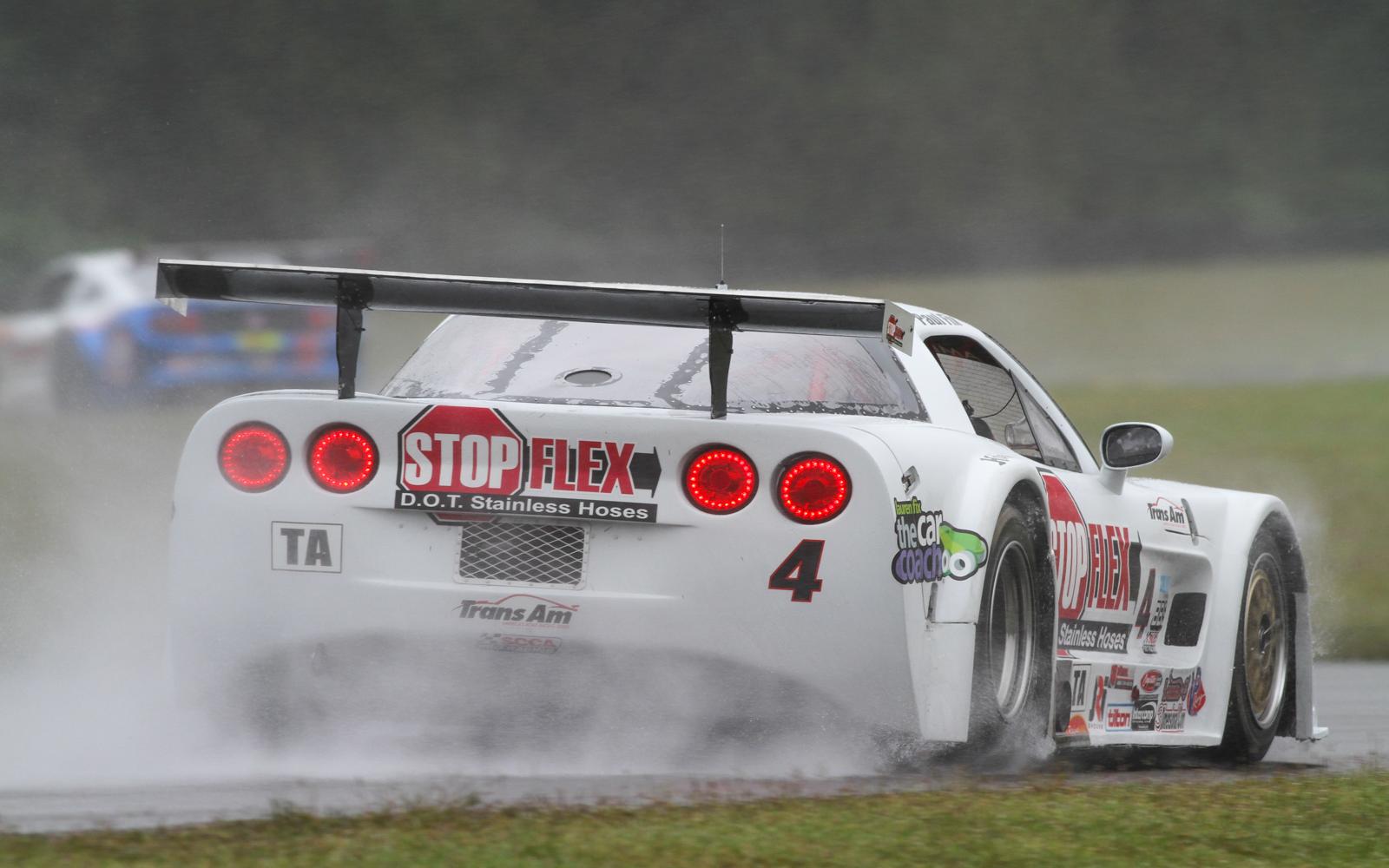 DANVILLE, Virginia (September 28, 2015) - Rainy weather was the name of the game at the Trans Am event at Virginia International Raceway (VIR) this past weekend, from Friday's opening practice session straight through a shortened Sunday afternoon race, but Tony Ave Racing (TAR) and Ave Motorsports entries paddled their way through a weekend of wet track sessions to get some positive results.

"It was very wet all weekend," Tony Ave said. "We were able to be easily quickest when we were chasing lap times, but since we were introducing a new engine package for the second race in a row, we spent most of our time mapping it and working out the basics. It's a testament to these engine companies like Ilmor, and especially DSS, who were able to win at Road America with us, that they can produce these things on such short notice."

After three full-course cautions over just 22 laps, Paul Fix, in the No. 4 StopFlex.com/ CarCoach.com Corvette, led the most race laps at eight, including the one that counted the most. The race on the historic 17-turn, 3.27-mile VIR road course had been scheduled for 31 laps/70 minutes, but after an accident that caused extensive track guard rail damage, officials ended the race early. Fairly steady rain throughout the early afternoon had caused a bit of carnage in the 49-car starting field.

Fix not only captured his second VIR win in a row but he narrowed the gap to TA class championship leader, Amy Ruman, to just 14 points, with 238 to Ruman's 252 points, with three races remaining. Fix led laps eight through 12 and then again for the final time for laps 20 through 22. Fix scored his third 2015 TA victory to go with previous victories at Lime Rock Park and Mid-Ohio Sports Car Course this season.

"I came into this race not knowing what to expect," Fix said. "Then, of course, our strategy went out the window when it started to rain, but we were just going to take the race as it came to us. I just kept my head down as I have all year long, just grinding away."

Fix races with TAR on an Ave Motorsports-built AR-1 chassis.

"Paul Fix ran a great race, never jeopardizing the car and running fast when he needed to," Ave said. "It was picture perfect for him actually."

Doug Peterson, driver of new No. 87 3-Dimensional.com Cadillac CTS-V, came into the VIR race in third place in championship points. However, the rainy weather got the best of his drive. He was credited with 11th-place finish and remained third in the TA championship standings with 198 points.

"Doug Peterson was really fast all weekend," said Ave. "Unfortunately, a lot of grass on the radiator ended his day early."

The debuting third TA class entry of Keith Grant in the No. 7 Tony Ave Racing Corvette came home in seventh place, an unexpected and strong finish for the Pro Formula Atlantic championship leader in his first Trans Am race. The No. 7 and Grant were entered to try a few new bits without jeopardizing any championship efforts but ended up being among the TA pacesetters all weekend.

"Keith Grant did a great job in the R&D car, getting up to third at one point until some questionable passes under yellow put him back a bit," Ave said. "We will be running him in the car again when we go to COTA in November."

Second place went to David Pintaric, in the No. 57 Kryderacing/WRP Investments Corvette that uses an AR-1 chassis, after a steady and smart race in the rain.

"David Pintaric showed once again that when the bad luck stays away, he's a guy to beat," Ave said. "He was definitely disappointed that the last caution stood in the way of making a run at Fix."

Cliff Ebben drove to a fourth place finish in the No. 36 Stumpf Ford/McMahon Group Mustang, adding valuable points to his championship pursuit. After a brief off-track excursion and subsequent pit stop to clear grass, the Ohio native battled back for a strong finish.

In the TAR TA2 front, Ave ran as high as third in his No. 70 Lamers Motor Racing Mustang, but had to make an early pit stop on Lap 10 with an overheating motor. He later suffered heavy damage after sliding off course under the wet conditions on Lap 20 but stepped out of the car uninjured.

"Unfortunately, in the race we had an issue where the engine was running very hot, and wasn't pulling down the straights well consistently," Ave said. "However, I managed to get up to third with no problem early, but decided to make a quick stop under a full course caution to try and get it to cool better, as I was afraid it was going to start to push water out. After the stop on the next restart, I got back up to third, and despite still running way too hot, I was gaining enough on the leader that it was still possible to win."

With a possible win within his grasp, Ave pulled out the stops.

"I drove absolutely as fast as I could, right on the edge," Ave said. "Then, going into Turn 3, I misjudged how much rain was falling since the previous lap and just locked the rear brakes for an instant, which spun me around and off into the wall hard enough to move it six inches. The Mike Cope car absorbed the impact perfectly, which, as a driver, I'm grateful for! It was an unfortunate end to the race, but I have to thank Phil Harper and the AEM guys for putting so much effort to get the package done on short notice. It will be a great package for the series."

"The Napoleons made great strides on their wet setup this weekend, and I know they are both looking forward to the next rain race," Ave said.

The Trans Am Series will head south for Round 10 of the 2015 Trans Am Championship to NOLA Motorsports Park in the greater New Orleans area, October 9-11th.