Jeff Holden’s road to the 2022 Trans Am Series presented by Pirelli Western Championship TA2 title wasn’t easy, as the talent pool in his class was deep this season, and the 39-year-old Snohomish, Washington native was operating his small family team with a lot of help from his father and a volunteer crew. But after claiming three victories and a pole in 2022 and overcoming a lot of adversity in the final races of the season, Holden was able to hoist the championship trophy for the first time in his Trans Am career.

Holden started the season off at Thunderhill Raceway Park with a fourth-place finish in the Western Championship standalone event, but when the National Championship joined the series in California, Holden earned back-to-back wins. At WeatherTech Raceway Laguna Seca, the race was a tight battle all the way until the last lap. Holden, who had won the pole, led the Western competitors throughout the event on his way to victory, but second-place finisher Ken Sutherland was never far behind.

“I want to thank my all-volunteer crew,” said Holden in Victory Lane. “We are a small team, we’re self-funded, and we are looking for wins to keep everyone happy on the car. I just want to thank Dakota Lithium, Motul and Joe’s Racing Products, who’ve been helping us for a couple years. Mid Valley Transmissions has been helping us out with transmissions for a while, and they’re obviously working great.”

The next weekend at Sonoma Raceway, Holden once again earned the checkered flag in his No. 11 RELAXandCBD.com/Dakota Lithium/Mid Valley Transmission Camaro following a tight three-way battle.

“I am so happy to get two in a row, we’re going to try to keep this going all year,” said Holden in Victory Lane. “I have to thank everyone who gets us to the track every weekend. We’re just a small family team, we built this car in my dad’s garage, so we wouldn’t be here without our sponsors.”

The race at Ridge Motorsports Park was Holden’s worst of the season, finishing eighth after a spin put him out of contention for the win. He rebounded with a second-place finish at Portland International Raceway, then found his way back to Victory Lane in the first race of a doubleheader weekend at Utah Motorsports Campus. Holden, who had been struggling with steering issues throughout the weekend and was set to start seventh in that race, incurred a penalty for being late to the mandatory driver meeting. Relegated to a 21st-place starting position, he quickly began an impressive march from last place to first when the green flag waved and claimed his third victory of the season.

“My guys were under the hood all weekend working on power steering problems, so these were my first real laps,” said Holden in Victory Lane. “I just felt like a caged bull all weekend, and as soon as they let me go, I was on a mission. The guys gave me a great car, and that’s all I can ask for. It was head down, no mistakes. I seem to do better under the higher pressure. We get help from M1 Racecars; they make a fast racecar and help me immensely, making sure we have everything we need, so after that, it was all up to me.”

With a solid fourth-place finish in the second race of the doubleheader, Holden came into the season finale at Circuit of The Americas with a 12-point lead over second-place Ken Sutherland. Even with a solid advantage, his fight for the championship was not easy. Holden once again experienced issues with power steering throughout the weekend and during the race, but ultimately finished sixth of the Western competitors. While it wasn’t the weekend he wanted to have, it was enough to secure his first Trans Am championship.

“It’s pretty awesome to win the championship, but this was a brutal race,” said Holden as his championship win was announced. “[My mechanical issues] couldn’t have been at a worse time. I ran the whole race with no power steering and ended up finishing that second half of the race with a bent rear end. So, it was just about maintaining the points lead, not worrying about anybody next to me. I just let guys by and maintained. Not exactly how we wanted to run, but we got a lot of help from M1 race cars and Dakota Lithium, RelaxAndCBD.com, Motul, and all the guys that get us here. More than anything, my dad helped build the car from scratch. My brother flew in to spot for me, and another guy I spot for in Legend Cars flew in. These guys spent their own money to help me. I’ve got to thank my family and my wife, my mom, and my kids for putting up with us working on the car 12 hours a day, every day, to get here. Thanks to everybody.” 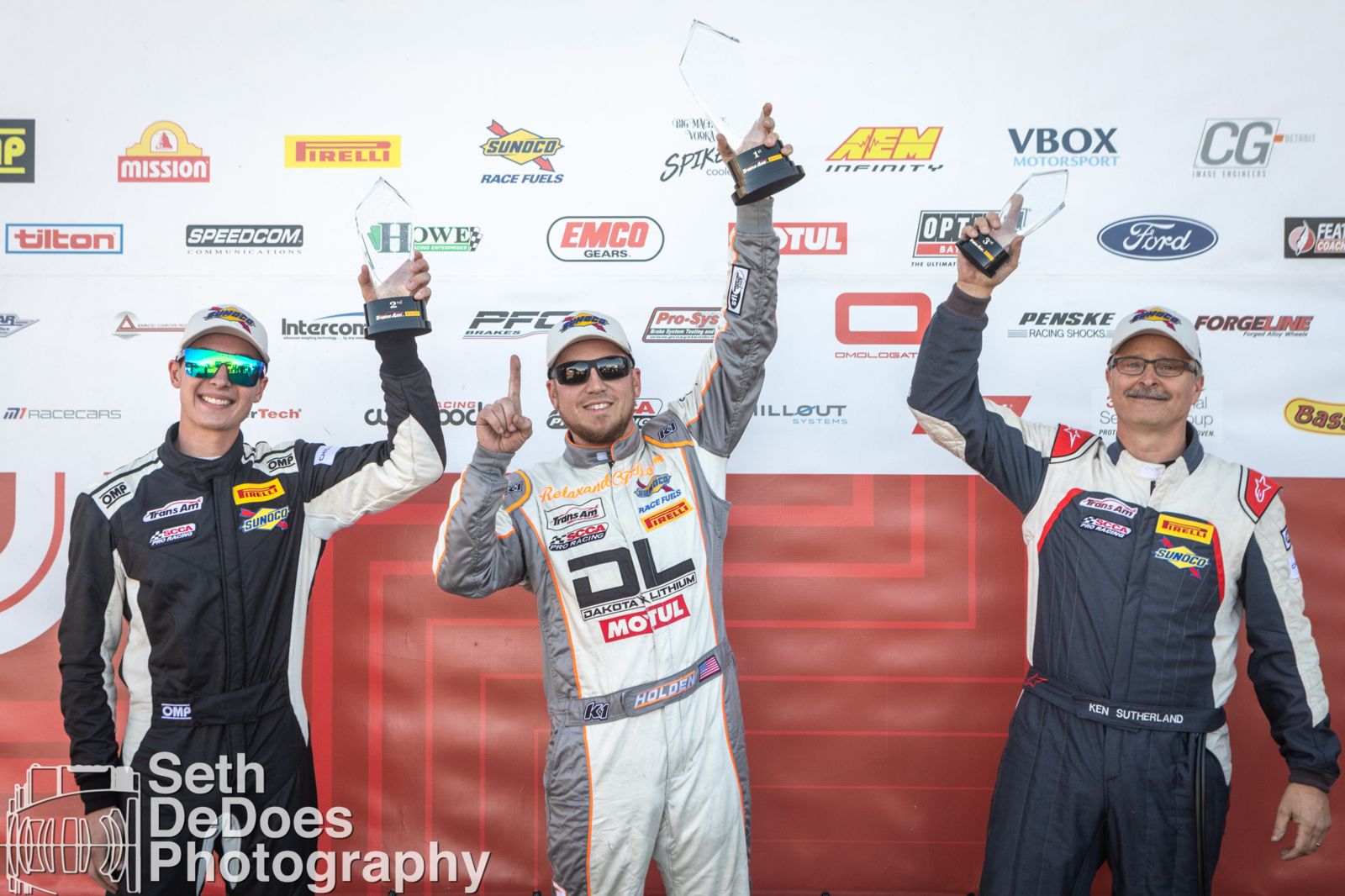