and cancelation of races

Champion Features from Trans Am to you

Mike Skeen took the lead in the run for the TA2® Powered by AEM championship by winning the pole for the Trans Am Series presented by Pirelli season-opening race at Sebring International Raceway, and he never looked back.

Skeen went on to win the Sebring event, his first of six victories in the hotly contested division (watch Skeen’s Sebring recap). Skeen added triumphs at Brainerd International Raceway, Road America, the combined rounds at VIRginia International Raceway and then put a stamp on the effort as he swept the season-ending double header at Michelin Raceway Road Atlanta. He also won six poles and finished on the podium in eight of the nine events with reigning class team champions Stevens-Miller Racing.

“Winning the championship was very special,” Skeen said. “We’ve led it from the very first session at Sebring, and it was amazing to finish it off at Road Atlanta with a pair of strong wins. It’s incredibly rewarding. Coming into the season, I knew the competition level was very high in TA2®. I wanted to come in with a strong effort, and show well for Stevens-Miller Racing.”

After winning the Sebring opener, he took third at Mid-Ohio and then won at Brainerd and Road America. A sixth in the Saturday race at VIR was the only race finish all year long that saw Skeen not emerge with a podium result. But he came back and won Sunday’s combined round at VIR.

Stevens-Miller won the 2019 TA2® crown with Marc Miller. This season, the team went flatout, winning four titles in the TA2® category: the driver championship, the team championship and both the Southern and Northern Cup titles.

“I wanted to keep up that high level,” Skeen said of his first season with SMR. “They have a number of strong brands to represent, like LiquiMoly, Turn 14 Distribution and Howe Racing. It was very important to represent them well, and we’ve done that this year.” 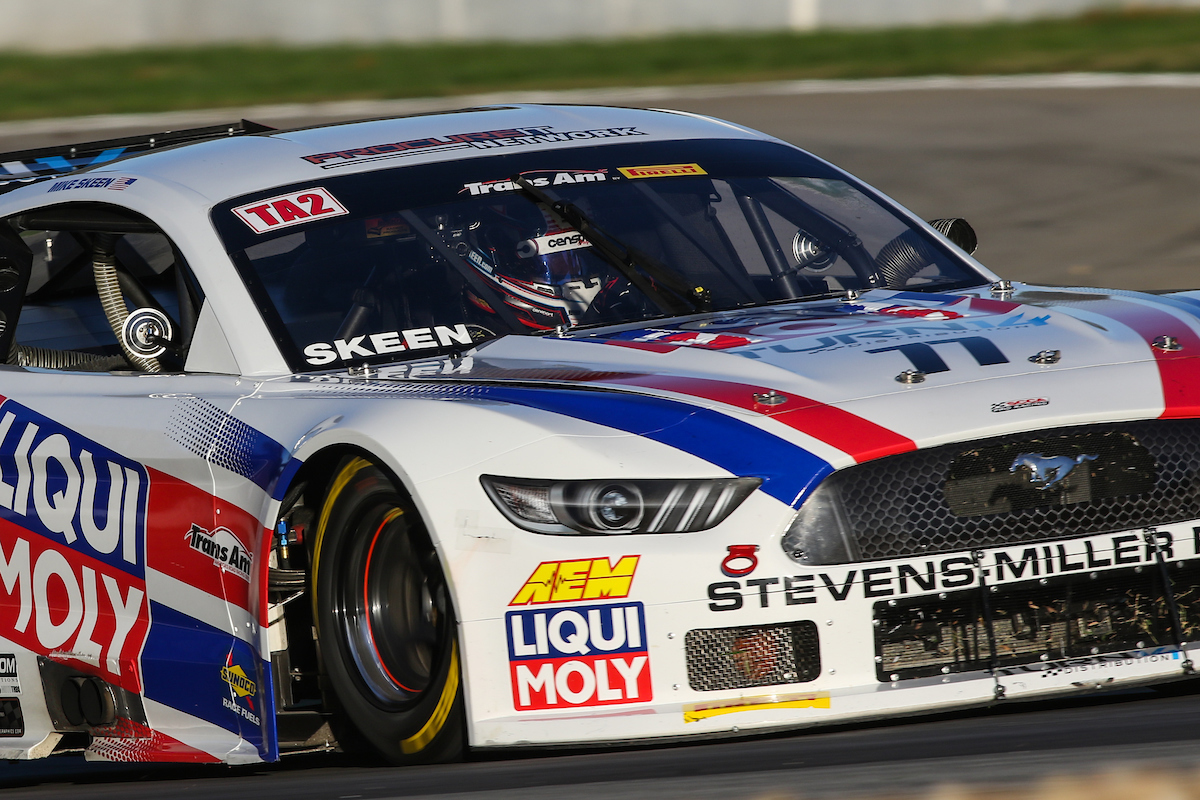 Skeen pointed to the Saturday race at Road Atlanta – where he clinched the title – and second round at VIR were personal highlights of his campaign.

“I enjoyed the Road Atlanta race because of the pace that we had, being able to fight off on all the restarts, and getting a last-lap pass for the win – all very close to home – was very important,” Skeen said. “At VIR, coming from the back of the pack in a spare car, was a highlight. And also the opening race at Sebring. Coming out immediately with a win right off the bat.”

The toughest part of the season was the VIR opener. The team came out with a Ford Mustang, and worked through mechanical problems to fight for points.

“But if a sixth-place finish in this field is disappointing, that’s pretty good,” Skeen said.

“We’ve got a strong field with guys like Cameron Lawrence, Rafa Matos, Thomas Merrill and all those guys. Then we get guys like Franklin Futrelle and Tyler Kicera who are relatively new but very strong. It’s exciting to have guys like that in the lead pack, and I hope they will be back for more in 2021. It’s been a pleasure battling with all those guys this year, and I’m looking forward to more.”

Skeen’s season of success will be highlighted in the CBS Sports Network three-part Trans Am Year in Review special December 19 at 7:00 p.m. Eastern.