Ruman cruises to victory in Classic Tube 100 at Watkins Glen 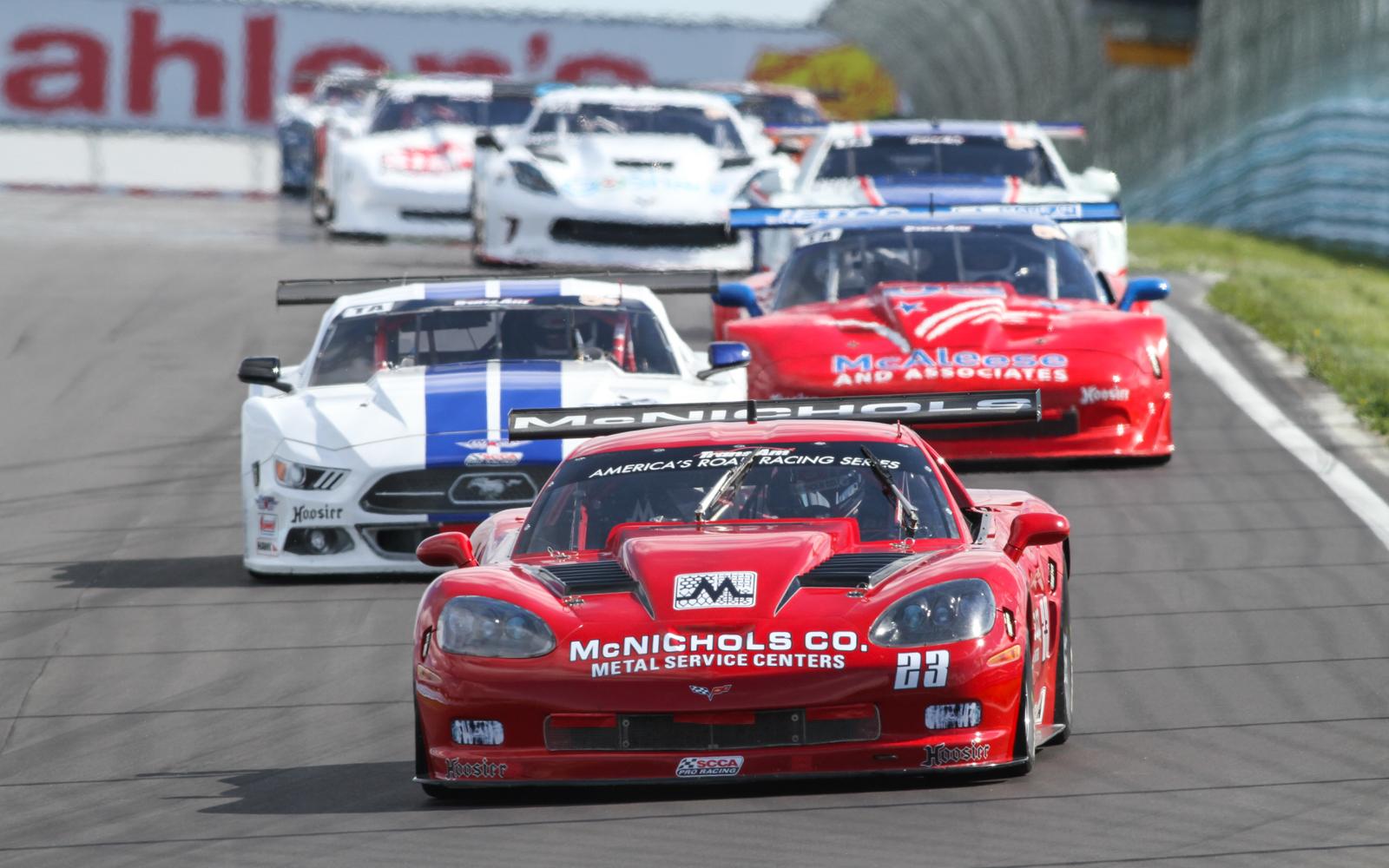 Boden, Francis and Kezman victorious in TA3, TA4 and TA5

Ruman, behind the wheel of the No. 23 McNichols Company Chevrolet Corvette, was joined in victory by Mark Boden, in the No. 47 Fall-Line Motorsports/Calypso BMW M3, Ernie Francis, Jr., in the No. 98 BetaTools/Liquid Performance Ford Mustang, and Tim Kezman, in the No. 4 Fall-Line Calypso Porsche 997, with each capturing victories in TA3, TA4 and TA5, respectively.

Ruman capitalized in a race that saw potential rivals suffer misfortune, eventually cruising to victory with a 28.098 second margin— crossing the finish line as snow began to once more fall on the 3.40 mile grand prix course at WGI.

“It was a great day,” said Ruman. “Our first victory in a snowstorm! This McNichols 23, once we got into a groove before the snow started, we laid down some pretty good laps—a 1:49 I think. But these guys, my crew, my dad, they do a great job preparing the car for every race. These PME motors are great for us; we just kept our nose clean and sprinted out to victory. It seems like everyone had some problems today and kind of made for an easy win in the end for us.”

After an early full course caution, Ruman battled for the majority of the race with Cliff Ebben, driver of the No. 36 Stumpf Ford/McMahon Group Ford Mustang, before the No. 36 succumbed to a power steering failure with 21 laps remaining.

“Cliff (Ebben) was right there with us,” said Ruman. “I got out on him a little bit but then got caught up in traffic in the esses, so he had a good run on us— he had another run up in the boot and he gave me some room to get around some of the lapped cars and that was really cool of him. It could have been a lot harder, but he kept it clean. It was a great race by Cliff; unfortunately, he couldn’t finish.”

Pole sitter Paul Fix, in the No. 50 StopFlex.com/TheCarCoach.com, opted to move to the back of the field after a change of four tires from qualifying. Fix moved up as far as sixth in two lap of green-flag racing before being contacted and suffering engine issues, ending his race.

Ruman leaves the weekend with her place atop the TA class points intact with 87 to her name, Kerry Hitt, who finished six, moves up second with 65 points, while Pintaric takes third with 58. Claudio Burtin and Simon Gregg hold fourth and fifth with 57 and 52 points each. 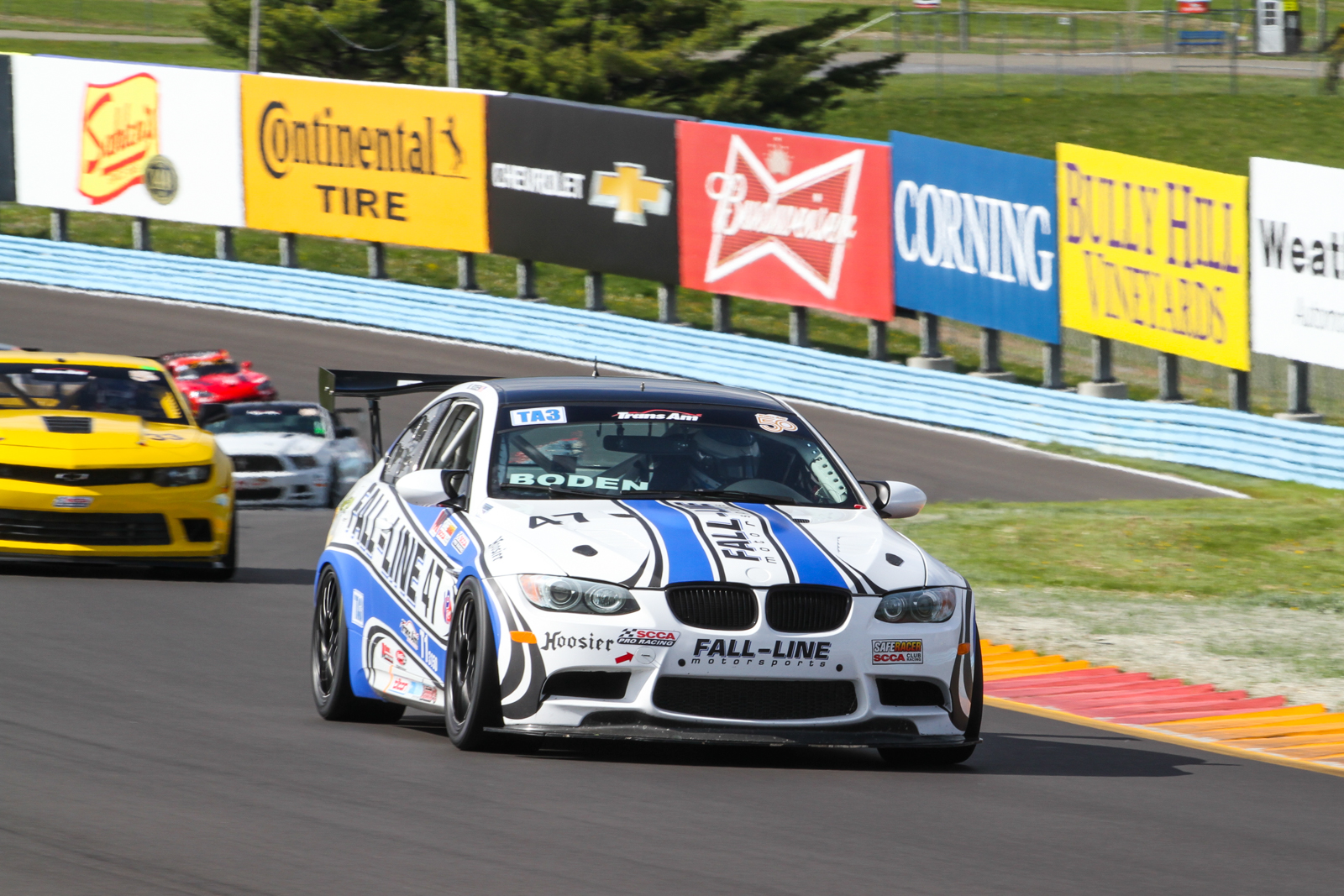 In TA3, Trans Am rookie Mark Boden captured his second Trans Am win of the year and his first in the TA3 class after switching from TA5—a switch that saw him battle early on with both current points leader Randy Mueller, in the No. 0 Bizbloom.com BMW M3, and Cindi Lux, in the No. 45 Lux Performance Group Dodge Viper ACRX.

“It was real fun, my first race in TA3,” said Boden. “I wasn’t sure how my car would stack up in this group, but we did pretty well. I really enjoyed the race, the Fall-line BMW was very good. Randy had me a bit in brakes; I had him in some other areas. It looked like he had a few transmission issues; I thought I was running away, and all of a sudden I got a call over the radio that Cindi was coming on strong in the snow!”

Boden was joined on the podium by Lux Performance Group teammates Cindi Lux and Steve Streimer, finishing second and third, as they made their Trans Am debuts for the year. Preston Calvert and Larry Funk finished fourth and fifth, completing the top five.

Despite his poor finish Mueller retains the TA3 points lead with 89 to runner-up, and Epic Motorsports teammate, Michael Camus with 56.

In TA4, two-time defending champion Ernie Francis, Jr., secured his third consecutive victory of the year despite starting in third position, behind pole sitter Tristan Herbert, in the No. 33 Tilton Motorsports Chevrolet Camaro, and Brain Kleeman, in the No. 07 DWW Motorsports Ford Mustang.

“I’ve got to say, this was my first ever snow race,” said Francis. “Still, we had a good race, just picked off first and second position the first couple laps, trying to run consistent times. We didn’t get a ton of time on track this weekend, so in the beginning we really just tried to get a feel for the track. We really started to find some speed later on; the end of the race started to get a little weird with the snow coming down. At that point I was just hoping for the best.”

Kleeman would continue to a second place finish, while Herbert would suffer an electrical failure, opening the door for his teammate Bill Baten, in the Tremec SKF/Backstreet Performance Chevrolet Camaro, to secure his first podium of the year with a third place finish.

The win only increases Francis’ lead in TA4, now with 99 points to Kleeman’s 85. 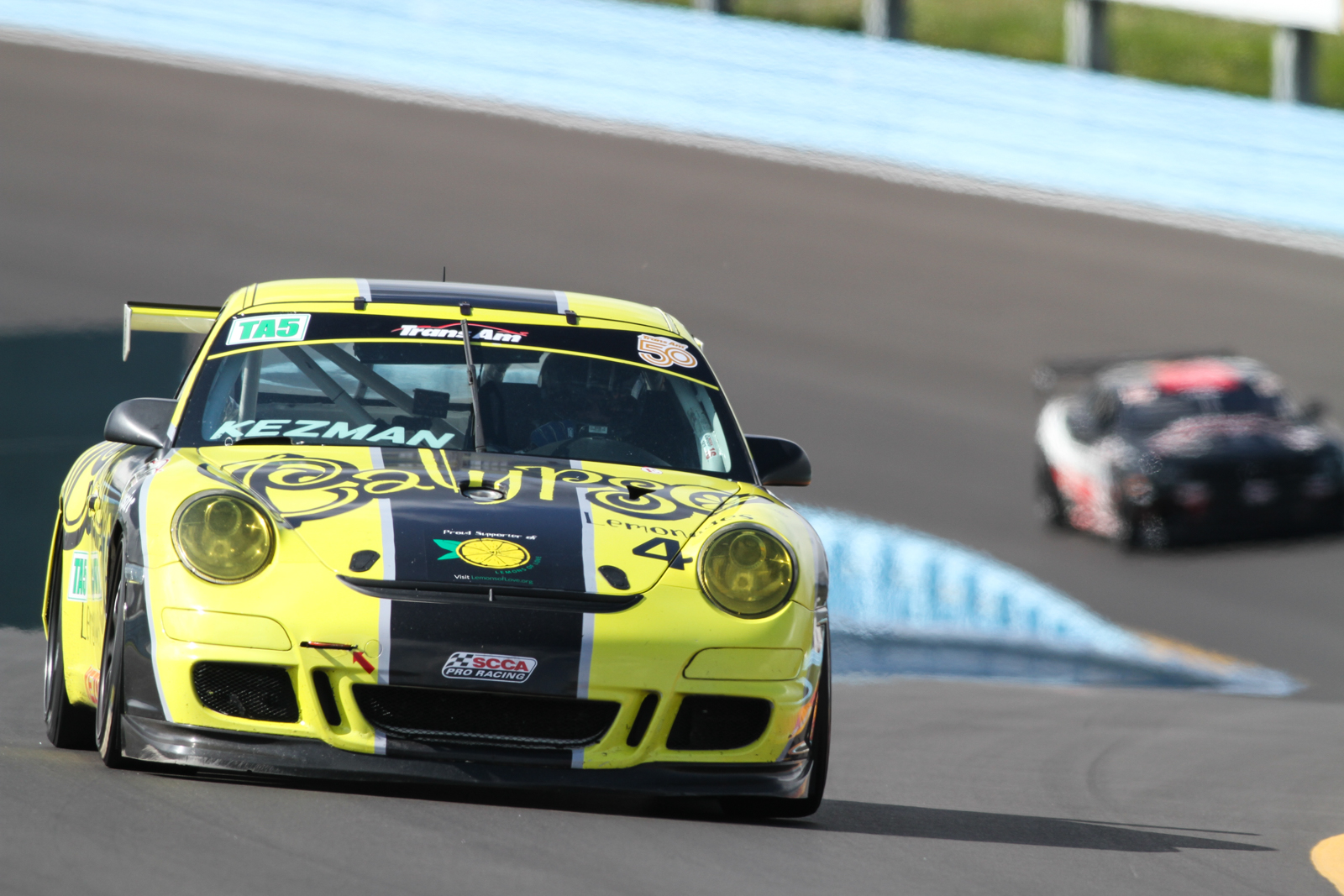 TA5 saw Boden’s teammate Tim Kezman secure a flag-to-flag victory—the first of his Trans Am career, giving the Fall-Line Motorsports team two wins on the day. Kezman was able to avoid an early incident that knocked out Connor Flynn, one of Kezman’s primary rivals for victory, helping pave his way to the finish line.

“The start was weird I think they flagger was a little slow,” said Kezman. “But nevertheless the race was hectic; and because of the start, I kind of got dive-bombed by some cars behind me, but ultimately the victory was staying out of the carnage in turn 9A. Calypso Lemonade and Fall-Line Motorsports—they’re the best in the business. They take care of the cars, they crew the weekend, they coach—without them we wouldn’t be here.”

The 37-car field went under caution for eight laps early on, the result of a five-car incident in turn 9A. The incident left all five cars unable to continue and in need of being towed. The remainder of the race continued under green conditions but finished a 70-minute timed race with 28 of the original 30 laps completed.

Previously in the day the TA2, powered by AEM, class held a separate 102-mile race with Dillon Machavern emerging victorious over a 27-car field.

Trans Am will next take to the track for The Chevrolet Detroit Belle Isle Grand Prix in the Motor City 100, presented by The 3-Dimensional Services Group, on June 3-5, an exhibition, non-points race.

About Classic Tube:
Classic Tube is a manufacturer of preformed tubing products for the automotive OE, aftermarket and restoration markets. In addition, they produce tubing for fleet, heavy equipment, marine, mining and aerospace industries. Classic Tube also manufactures a complete line of replacement brake, fuel, transmission and carburetor tubing applications for Cars and Trucks both Domestic and Foreign, from the 1930's to present. www.classictube.com