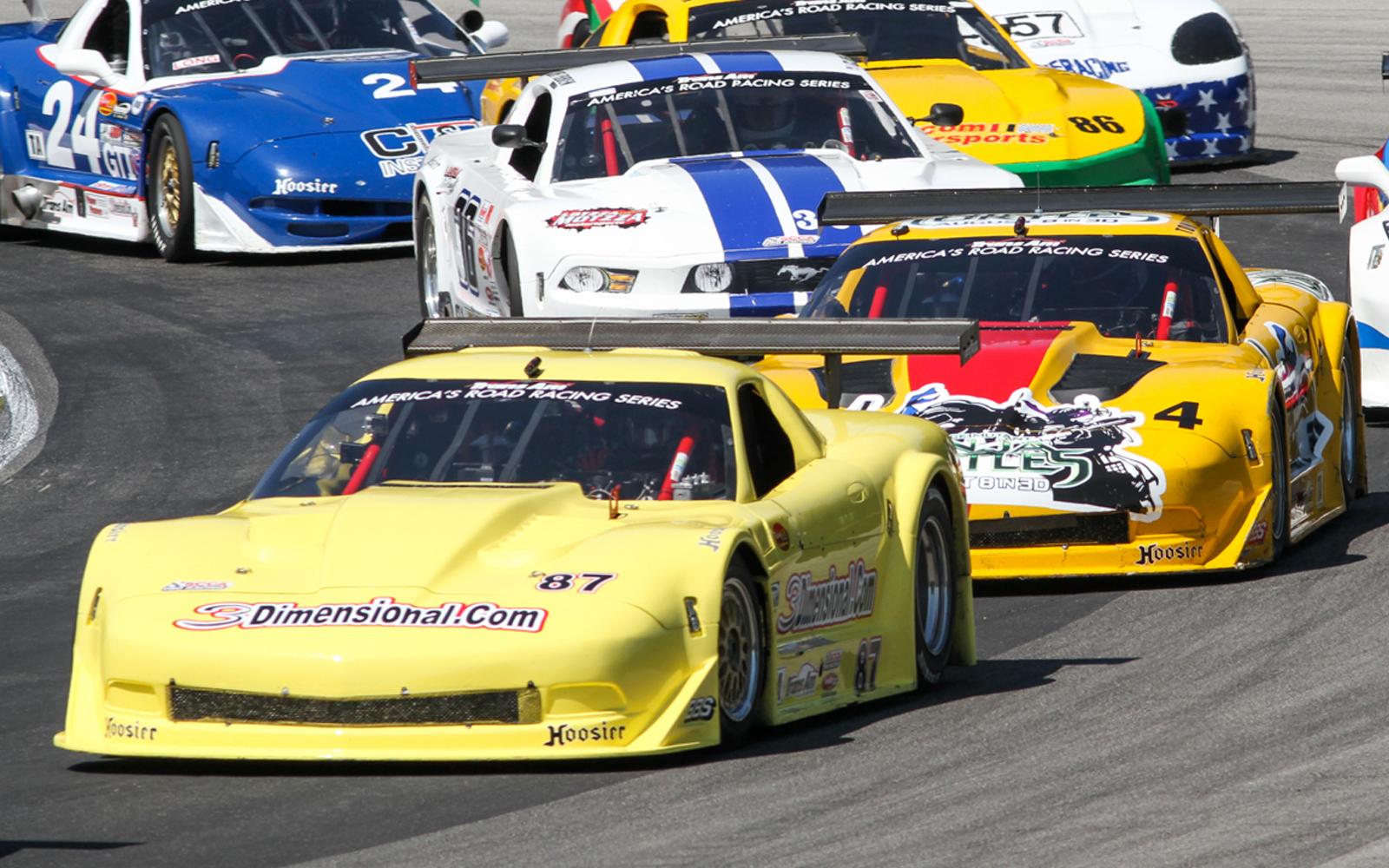 LEXINGTON, Ohio (Aug. 16, 2014) – (Provisional) Defending TA Champion and current points leader Doug Peterson and the No. 87 3Dimensional.com Chevrolet Corvette came away with the overall victory and TA class win in the 3Dimensional Services Next Dimension 100 at Mid-Ohio Sports Car Course in a race that included four lead changes in the TA class.

With 58 cars on the technical 2.58 mile course in this, Round 7 of the 2014 Trans Am Championship, class winners came away with hard-earned victories in what was one of the more crowed races ever for the Trans Am Series.

Immediately after the course went green, Ruman sprang into action on the first lap, overtaking both Drissi and Peterson immediately, taking advantage of her hometrack knowledge. Ruman would hold that position up until the 15th lap of the race when the first full course caution began shortly after contact between the No. 23 of Ruman and No. 4 of Drissi, leaving Peterson in the lead with Gregg in second and Ebben in third.

Loshak’s time in the front only lasted three laps, with Adam Andretti capitalizing during the fourth lap as the No. 42 fell behind; likewise, Ron Keith moved his way forward, settling into second position going into the first caution, while Poitras held third.

When the race restarted on the 19th lap, Peterson surged ahead with Gregg and Ebben chasing. Ebben would make his move during lap 21, passing Gregg and immediately applying pressure on Peterson and overtaking the defending Champion on the next lap for the race lead.

In TA2, the battle for the lead between Andretti and Keith continued with Camaro and Mustang going nose to tail; then on the very beginning of lap 23 the No. 44 of Andretti went just off course on the main straight, nearly shearing off the splitter on the Engineered Components machine.

Keith capitalized, taking the lead and adding several car lengths between himself and Andretti. But Andretti was quick to recover, recovering the lead from Keith two laps later just as the track headed into its second full course yellow of the day.

The eventual restart had an impact on the TA2 race as well, as Kevin Poitras served a drive through penalty, seeing the No. 14 Stumpf Ford/ McMahon Group Ford Mustang of Joe Ebben, Cliff Ebben’s son, move up into third.

Andretti, Keith and Ebben would cross the finish line for the TA2 in that order, keeping pace throughout the final 13 laps, despite several challenges by Keith on Andretti’s lead.

In the TA class, Doug Peterson was able to close the gap on Cliff Ebben, regaining the lead shortly after a restart, then powering the No. 87 ahead able to keep Ebben at bay for the remainder of the race. Likewise, Simon Gregg was able to keep pace with the front two, enough to earn him third place in the TA class.

“We had a pretty conservative setup for the car,” said Peterson. “We were not quick right away, and I definitely struggled during the first quarter of the race. Tony (Ave) just kept saying, ‘just let it come to you, we’re ok,” and we had a great car at the end, and for the first time, he was right! At the end of the day a W is a W, and it’s great to bring it home in front of all the fans here.”

The win marked Peterson’s fourth on the year, increasing his points tally to 201, opening up a 34-point gap on now points runner-up, Simon Gregg, who has 168 points as of the conclusion of the race. Amy Ruman dropped back to third in the points, just one off of Gregg, as her disappointing 41st place overall finish, the result of a last minute off-course excursion, put a slight damper on her Championship hopes.

Andretti was pleased with his win, and a new track record lap of 1:28.277 as well, and proud of the battle between himself and Ron Keith upfront.

“It was a crazy race from the drop of the green,” said Andretti. “It was a clean race too for us up front. It was a typical heavy traffic day in the Trans Am Series, which isn’t a bad thing; it just means you have to adjust your style. Ron Keith and I had a great race; you can’t give him even a little space and he’s constantly challenging, constantly pushing you. At one point, I almost tore the splitter off the car, and he was right there. Eventually I was able to battle back, but I was blessed to be a part of this day, this race and to bring home a win for ECC.”

Andretti’s win helped him close the gap on current points leader and defending TA2 Champion Cameron Lawrence, driver of the No. 1 Miller Racing Dodge Challenger SRT. Lawrence joined four-time Trans Am Champion Tommy Kendall this week in debuting the Dodge Challenger in the TA2 class and still holds the TA2 points lead, with 206 points to Andretti’s 189.

“I’m incredibly proud of the team for getting here to the Mid-Ohio track for our first Trans Am race,” said Russ Ruedisueli, head of SRT and motorsports engineering, SRT Motorsports. “The team worked incredibly hard to get here when you’re coming to the race with a new car and motors. It was pretty brave. I think we’re all a little disappointed in the finish, although Cameron did an awesome job getting us up to 10th. Tommy ran a strong race too, even though he was unable to finish just a few laps from the end. Alll in all, it was a pretty good weekend. We’ll take a look and regroup for the next race at Brainerd.”

Joe Ebben’s third place finish in TA2 saw him and his father, Cliff Ebben, both land on the podium for the day in their respective classes, as the father son duo put on a show here at Mid-Ohio.

Pole sitter Lawrence Loshak would finish 47th after retiring due to mechanical failure.

In TA3, Ernie Francis, Jr., continued his tour de force behind the wheel of the No. 9 Breathless Performance Chevrolet Camaro, marking his fourth victory in a row this weekend, and taking the points lead from two-time defending Champion Chuck Cassaro. Francis, Jr., now has 185 points to Cassaro’s 172 and led every lap of the race in the TA3 American Muscle Group.

“From the very beginning I wanted to put in some hard laps and really build a gap from the rest of the field while I could,” said Francis, Jr. “Once we built it up to a comfortable lead, the team told me to back it off and run fluid and consistent laps. Fortunately, we were able to cruise to the finish—the yellows really ended up working to my advantage, giving me some separation and the position I needed to bring the win home.”

“I guess everyone gets lucky twice,” said Saunders. “There was a ton of traffic, you always had to keep an eye on your mirrors, balancing everything. You want to keep everyone in your class at bay, but let the TA and TA2 guys by… they were just flying. I’m always trying to visualize everything, and we just stayed consistent and ran clean.”

Following Saunders was Clint Sawinski, in the No. 94 Temp Air Porsche Super Cup, who finished second and Russ Snow, in the No. 20 Carbotech/ Chevrolet Corvette, in thrid.

Russ Snow increased his points tally as he remains the International Group leader with 138 points; likewise Jason Berkeley, in the No. 67 BMG Managment Chevrolet Corvette, added to his points total as well with a fourth place finish, overtaking Norm Betts for second position in the group with 109 points to Betts’ 88.

Trans Am will return to the track on August 31st at Brainerd International Raceway for Round 8 of the 2014 Trans Am Championship.

Keep up with all things Trans Am at www.gotransam.com, on Facebook at www.facebook.com/gotransam and on Twitter at @gotransam.

ALL RESULTS ARE PROVISIONAL