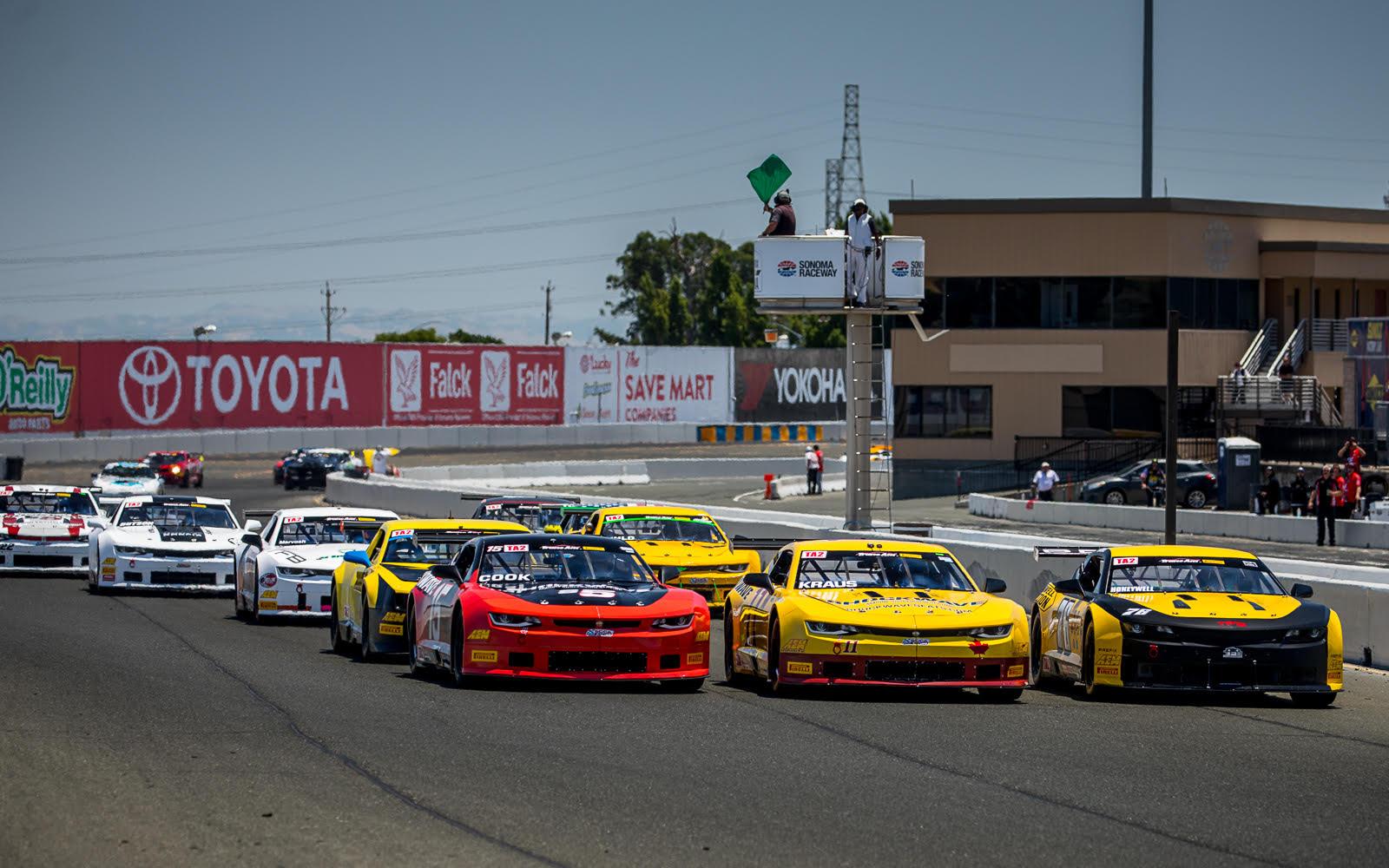 Sonoma, CA (16 June 2019) - Derek Kraus is only 17 but he has more racing experience than many drivers twice his age, and his experience paid huge dividends at Sonoma Raceway on Sunday in Round 4 of the Trans Am Presented by Pirelli West Coast Championship.

Currently leading both the East and West K&N Pro Series, Kraus made his Trans Am debut in the No. 11 Shockwave Marine Suspension Seating Chevrolet Camaro handed over to him for qualifying by team owner David Smith after losing an engine in his No. 5 just before qualifying.

Kraus rewarded Smith and the Shockwave team by qualifying on the TA2 Powered by AEM pole, then seizing the TA2 class lead on Lap 7 of 38 laps around the challenging Sonoma course and never relinquishing.

Due to technical issues affecting timing and scoring throughout the weekend, Kraus’ laps in the lead never showed up on LiveTiming and Race-Monitor scoring apps, but there was no mistaking the Stratford, Wisconsin high school student's confident victory.

Kraus was jumped on both the start and a Lap 4 restart by third qualifier Anthony Honeywell (No. 76 Honeywell Competition/TFB Performance Camaro), but managed to find a way past the West series TA2 points leader within two laps on both occasions.

“I was really surprised at the start, going into Turn 1 three wide, coming out that way!” said Kraus. “Wasn’t really expecting it. But at the end, it all worked out. I just want to say thanks to David Smith and everyone at Shockwave — the whole crew. They worked their tails off all weekend. They gave me a really good car, and I knew I just had to stay patient in the race."

Second overall (and second in TA2) was Kraus’ Shockwave teammate Chris Cook, who finished nearly 18 seconds behind. Cook and Kraus have a long history together, and thanks to Smith (who made cars available to both Kraus and Cook as well as a third young up-and-comer, Lawless Alan), they were able to race together for the first time.

“I love working with raw talent like that guy right there in the NAPA [driver’s] suit (Kraus)” said veteran driver coach Cook. “Really good job by Derek today, and my car was really good, too. Just a huge thanks — I love driving race cars, and a huge thanks to David Smith. Amazing man and you should read his story! Huge thanks to David and all the guys on the team — Team Shockwave kicks ass."

"I knew if there was going to be a late-race yellow, Chris was going to be really good,” Kraus said later, explaining his hard pace throughout. “[Chris] helped me this whole weekend. Two years ago when I met David and Chris and came here, I had no idea what I was doing. And ever since, Chris has been helping me. Shockwave gave me a really good race car and I ended upon top.”

Third in TA2 was up for grabs most of the race, held initially by Honeywell after both Kraus and Cook worked past; then by a third member of the Shockwave crew — college student and National Trans Am series regular Alan — who had charged up from the back and swept into third on Lap 11.

Honeywell and Brad McAllister ( No. 24 PortlandImplantDentistry.com / Rhom Innovations Ford Mustang) tangled on lap 27, though, and both lost time recovering.

A spindle broke on Alan’s Camaro on Lap 15. He first noticed his brakes were fading, then catastrophically with four laps to go, the young Californian nursed a nearly brakeless car for more than 10 laps.

Thus, third in TA2 in the end was Michael Mihld (No. 55 MMR Camaro), who ran consistently, picking off position after position, while Honeywell recovered to finish fourth.

McAllister, with two wins in 2019 and second in the West Coast Championship TA2 points heading in to the Sonoma weekend, was given a 40-second penalty after the race for on-track incidents and was pushed back to seventh in class.

In TA, Simon Gregg (No. 59 Derhaag Motorsports Chevrolet Corvette) had a lonely race after both the pole winner Michelle Nagai (Berkeley Jet Drive Corvette) and fast local driver Michael Fine (in a back-up Architectural Glass Systems Camaro delivered to the track on Saturday night) retired in the opening laps with mechanical problems (rear end and brakes respectively). Gregg won TA, but was frustrated about finishing behind a pair of TA2 cars.

“The TA2 cars were really good this weekend,” he said, but added graciously: “I had a good time out there. Thanks Jim (Derhaag); Joy, my significant other for going to the races with me; John (Clagett, Trans Am Co.) for the work you do — I’m glad to be a part of the West Coast Trans Am series.”

The Sonoma win was Floridian Gregg’s third in a row following a second in the Thunderhill season opener, and he has paved a clear path to the 2019 TA title.

The car (which has been co-driven by Trans Am GT-class competitor Beau Borders among others) is well known in West Coast endurance racing circles, but many drivers, mechanics and even officials in the Sonoma paddock, had never seen one before.

The PDG team received permission to enter on Sunday morning; chased down a set of Pirelli tires (as required); and started from the back, Rydquist carving through the field to his fourth-place finish, with TA winner Gregg in his sights as the checkered came out.

“A Trans Am [class] victory is a dream come true,” said Rydquist, from Sweden but currently living in California. "First of all, just to be able to start, so thank you to the Trans Am organization, to SCCA Pro and of course to Pirelli for finding us tires on such short notice — it’s been amazing. The race was good — just what I thought it would be. Tough racing, but fair and fast racers. I can’t wait to do a whole weekend and maybe qualify a little further up…"

GT was won by fast-qualifier Clark Nunes (No. 79 Premier Homes Camaro) who led from flag to flag. Nunes was “recruited” by GT-class regular Roger Eagleton, and was asked in Winner’s Circle how that happened:

“Well, [Roger] told me if I bought a good car, I could win - and he was right,” said Nunes. “I bought a really good car — made zero adjustments other than the seatbelt — and the car ran great all weekend.”

Two races remain in the Trans Am West Championship — Portland International Raceway, July 26-28, and Circuit of The Americas, Oct. 4-6.