Trans Am ready for Motor City alongside 3-Dimensional Services

DETROIT, Mich. [May 30, 2017] – For the Trans Am Series presented by Pirelli, there’s no place like the Motor City.  Today’s Trans Am is built upon the shoulders of American V8s, with rows of Corvettes, Mustangs, Camaros, Challengers and Cadillacs vying for the Trans Am title, a ritual now 51 years old.  This weekend, June 3-4, Trans Am will return to the city that forged these iconic vehicles for the 3-Dimensional Services Motor City 100, Round 4 of the 2017 Trans Am Championship and part of the Chevrolet Detroit Grand Prix presented by Lear—once more bringing together the city that forged the muscle car and the series that put them to work on the famous 2.35-mile circuit on Belle Isle.

Trans Am brings with it a concentrated field of 26 cars entered across the TA and TA2 classes with each class holding its own timed race: the TA class’ 3-Dimensional Services Motor City 100 on Saturday, June 3, and the TA2, powered by AEM, exclusive 3-Dimensional Services Muscle Car Challenge on Sunday, June 4.   The event mark’s Trans Am’s 20th appearance in Detroit and first formal championship round since 2001; the Series’ appearance in 2016 was an exhibition only.

A win in Detroit means more than simply points and championship standings; it’s where the light shines the strongest—competitors race in the automotive capital of the world with 95,000 eyes on their backs.  A victory means joining the likes of Wally Dallenbach, Jr., Scott Pruett, Greg Pickett, Scott Sharp, Ron Fellows, Tommy Kendall and more as Trans Am winners in Detroit. 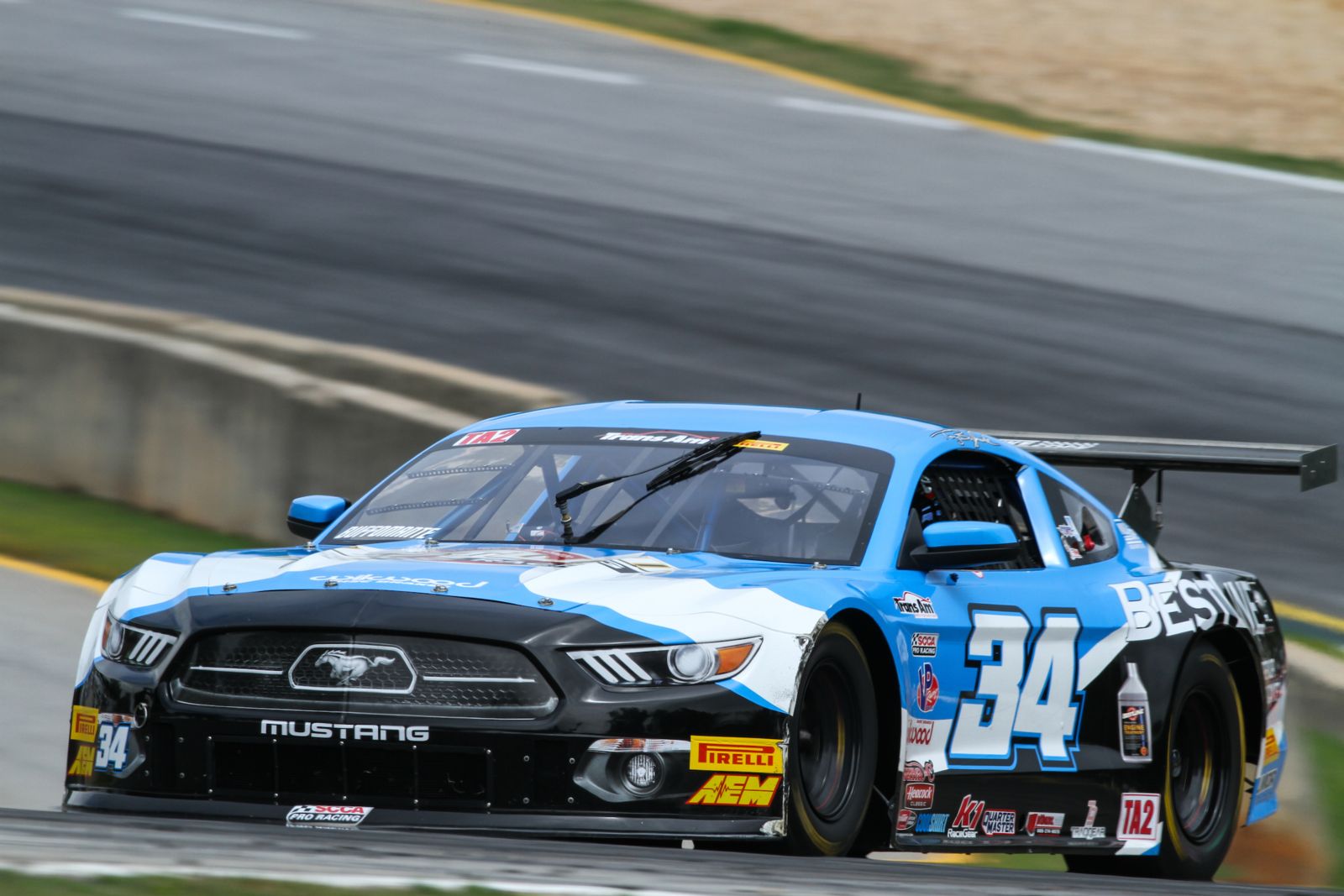 The TA2 field, featuring 17 entries, stands as one of the most competitive in the class’ brief history.  Eight of the entrants have career TA2 victories already to their name, while 10 have podium finishes.  Likewise, the field contains three TA2 champions: Cameron Lawrence, 2013 and 2014 TA2 champion and driver of the No. 19 Class Auto Centers Chevrolet Camaro; Gar Robinson, 2015 TA2 champion and driver of the No. 74 Pura Vida Tequila/ 74 Ranch Resort Chevrolet Camaro; and defending Champion Tony Buffomante, driver of the No. 34 Bestline Superior Lubricants Ford Mustang— hot off a win last round at Road Atlanta.

Last year on Belle Isle, Adam Andretti, in the No. 44 ECC/ Anchor Bolt and Screw Chevrolet Camaro, and Kyle Marcelli, in the No. 96 AARDA Inc/ FerPail Infrastructure Chevrolet Camaro, split TA2 wins over the two races held.  They, along with Robinson, Lawrence, Tom Sheehan and AJ Henricksen, have experience on the Belle Isle course in the TA2 class— for the rest of the field, powering the tube-framed muscle cars around the street circuit will be a new exercise altogether.

Other TA2 race winners within the field include current TA2 points leader Dillon Machavern, in the No. 24 Heritage Motorsports Ford Mustang; Lawrence Loshak, in the No. 5 Pennzoil/ ETE Reman Chevrolet Camaro; and Shane Lewis, in the No. 72 Pura Vida Tequila/ 74 Ranch Resort Chevrolet Camaro.  Gar Robinson holds the TA2 race record on the 14-turn circuit with a time of 1:37.531, while Adam Andretti’s 1:38.347 stands as the qualifying record.

The TA2 class also features two relative newcomers to Trans Am, both with very different backgrounds.  Sheldon Creed, in the No. 12 Stevens Miller Dodge Challenger, a two-time Speed Energy Formula Off-Road champion and Speed Energy Stadium Super Trucks competitor, will make his second Trans Am appearance after finishing eighth in his debut last round at Road Atlanta.

Likewise, Raphael Matos will be plying his trade in the TA2 class this weekend in the No. 87 3-Dimensional Services Group Chevrolet Camaro.  Matos stands as a veteran of open-wheel competition, with both an Indy Lights and Champ Car Atlantic title to his name as well as 2009 Indy Car Rookie of the Year.  Now Matos will attempt to translate his open wheel prowess to a far different beast, the larger, heavier tube-framed TA2 racecar. 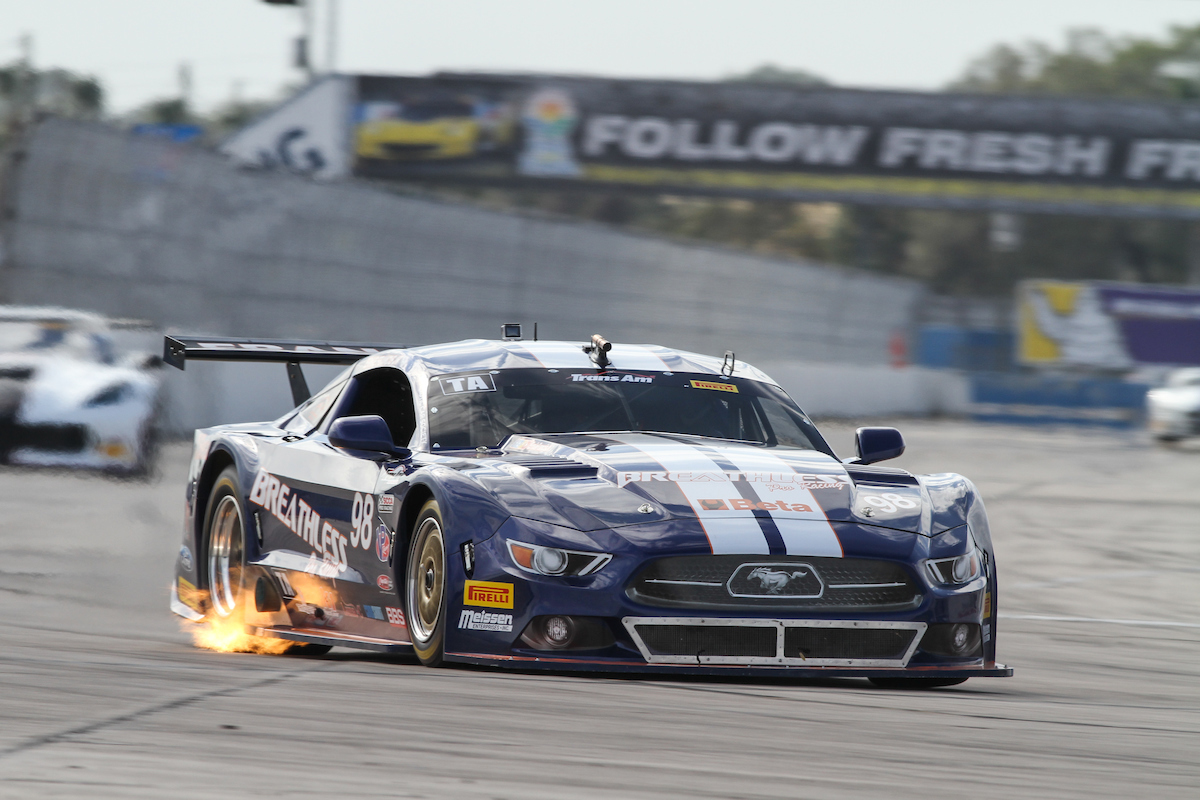 In the TA class, Ernie Francis, Jr., in the No. 98 Breathless Pro Racing/ Beta Tools Ford Mustang, enters the weekend on the back of two consecutive victories at Road Atlanta and Homestead-Miami, as the 19-year-old looks to continue his streak on familiar ground.   Francis, who made the leap from the TA4 class to TA this year after three championships, is ready to move up from his production-based beginnings to the 850-plus horsepower machines of TA, and so far the transition has gone seamlessly.  Francis enters the weekend with the championship points lead, which when paired with the experience of a TA4 win on Belle Isle last year makes him one of the favorites for the TA class competition.

Two-time defending TA class champion Amy Ruman, in the No. 23 McNichols Company Chevrolet Corvette, will also be in attendance as she looks to continue making history behind the wheel of the No. 23.  Ruman stands as one of the most decorated TA class competitors active today, standing tenth all-time in TA wins with 16 to her name.  For a driver whose success has become synonymous with the Trans Am name, a career first win in the Motor City 100 would only add to her place in the Trans Am history books.

Also in attendance will be 2009 Trans Am champion Tomy Drissi, in the No. 8 War for the Planet of the Apes Ford Mustang as Drissi continues his return to full-time Trans Am competition still searching for his first win of the season, despite a wildly successful run in the Trans Am West Coast championship that has seen him claim two victories.

John Baucom, in the No. 86 Baucom Motorsports/ RoadRaceParts.com Ford Mustang, was the TA class victor in Trans Am’s second race on Belle Isle in 2016; he returns in 2017 for another shot at Motor City glory; while 2016 TA Rookie of the Year Vinnie Allegretta, in the No. 41 TA Sights and Sounds Chevrolet Corvette, enters Detroit still searching for his first career TA win, despite finishing on the podium multiple times in his career.

More veteran members of the TA class in attendance include Claudio Burtin, Kerry Hitt, AJ Henriksen and Simon Gregg, while Jeff Hinkle stands as the single rookie in the TA class.