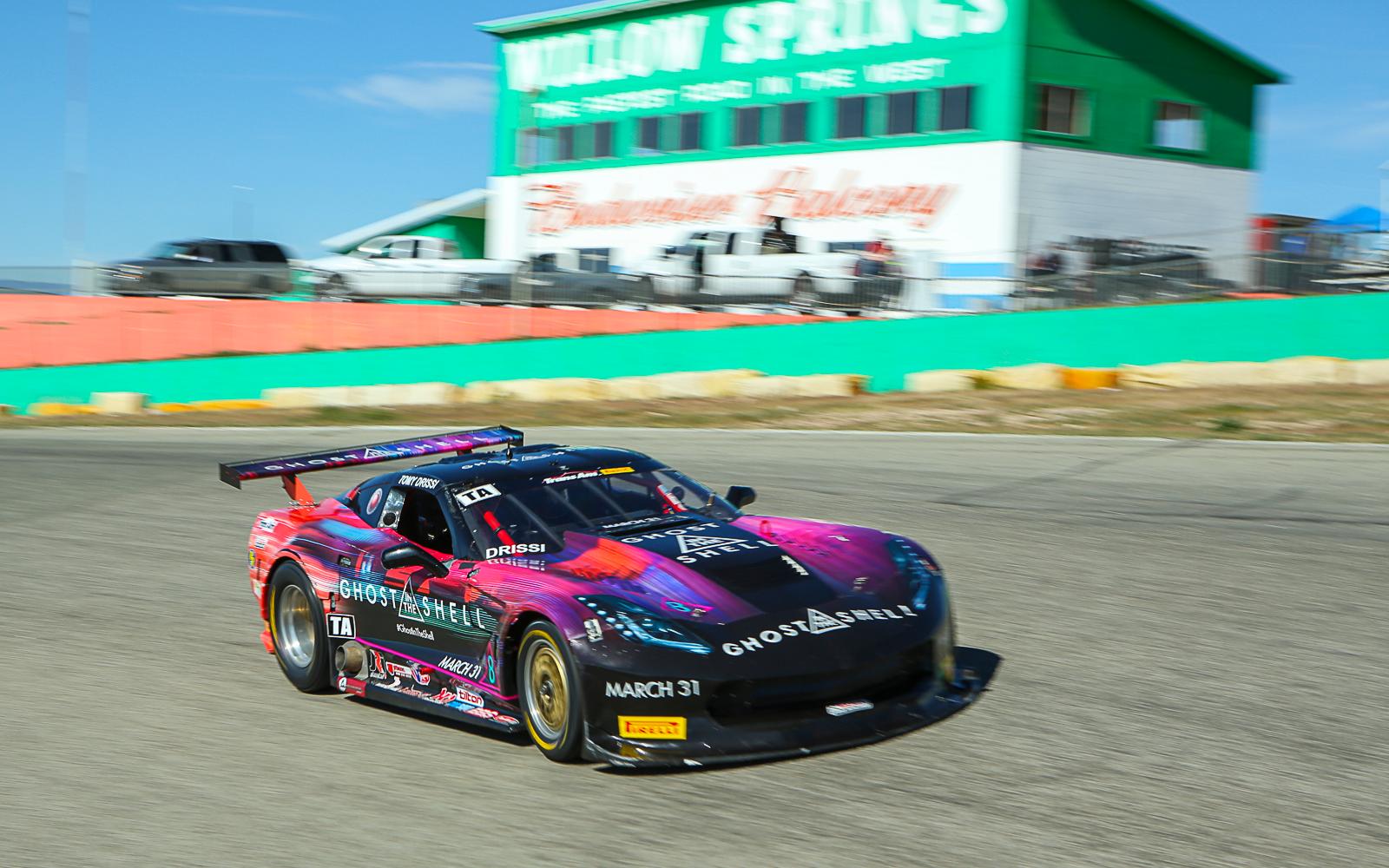 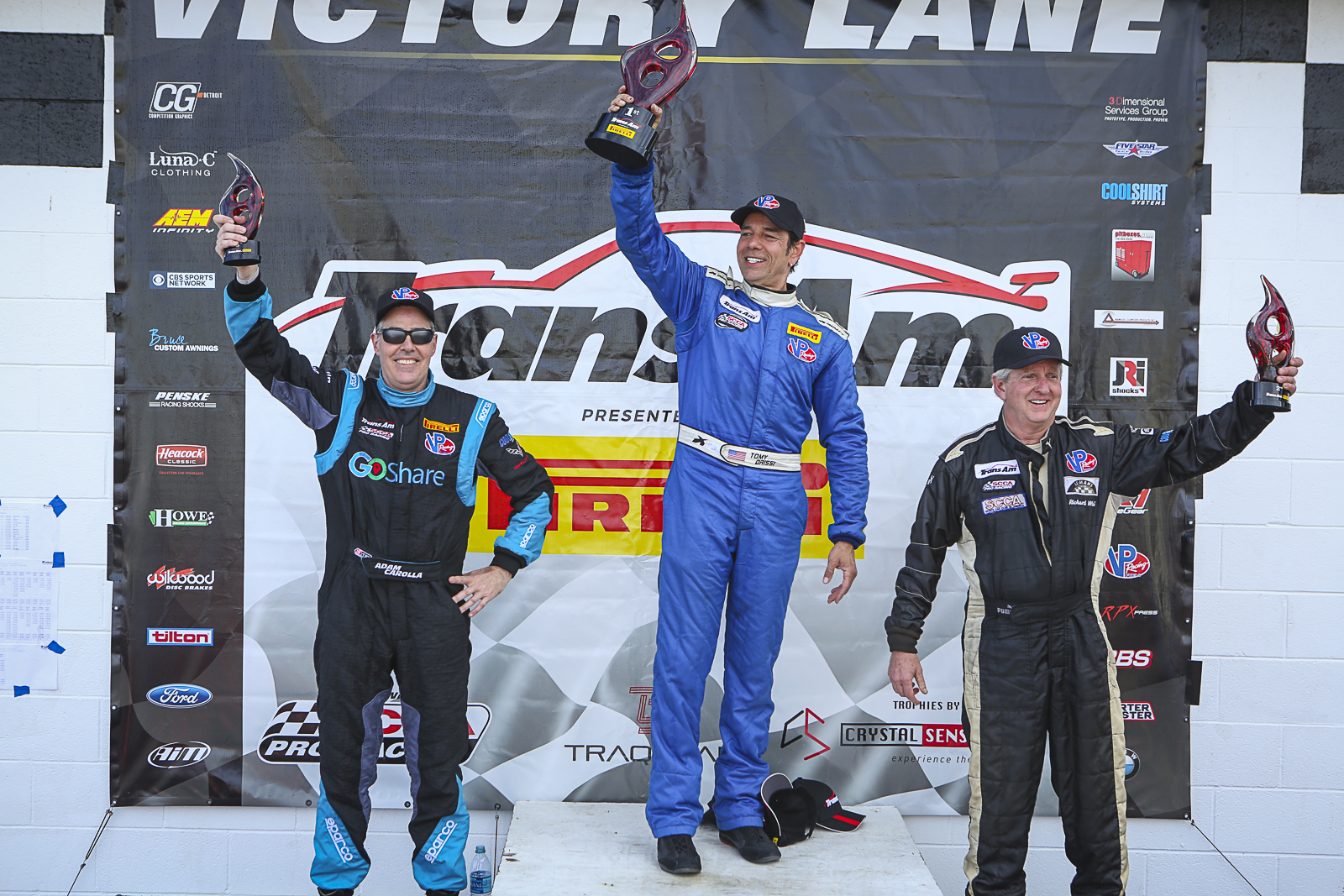 ROSAMOND, Calif. [March 26, 2017] – As the Trans Am Series presented by Pirelli held the inaugural round of the 2017 Trans Am West Coast Championship at Willow Springs International Raceway, Los Angeles native Tomy Drissi emerged victorious in the No. 8 Ghost in The Shell Chevrolet Corvette.  The win marked the first Trans Am victory awarded on the West Coast since 2009 at Portland International Raceway, a win also secured by Drissi.   The 100-mile, 40-lap, multi-class race on the 2.5-mile “Big Willow” course also saw Brad McAllister and Tyler McQuarrie secure victories in the TA2 and TA3 classes.

The victory is Drissi’s first in Trans Am since 2010; as he returns to full-time competition in both Trans Am’s West and primary championships—back in a Series in which he now holds 101 starts and four career victories.

“It’s a great feeling,” said Drissi. “For Trans Am to be out here, for Pirelli tire, for all my sponsors and all my supporters, including Ghost in The Shell opening March 31st, how could I ask for a better day? A win at Willow Springs.  I think we set some records this weekend, and now people can come and try and beat them.  But that’s what we want.  We want people to come and join us and race the coolest cars ever.”

“I made the decision to return to Trans Am,” continued Drissi.  “The Series started coming back, started growing.  The TV package is growing as well, so the sponsorship is good.  The Trans Am cars—they’re the greatest cars to drive.  Ask any of the greats that have had the opportunity to drive one of these, they’ve all said these cars are fantastic to drive.  850-horsepower, tube-framed, silhouette bodies— you’re supposed to make cars go faster, that’s what this platform does.  I love the other types of racing, I’ve done IMSA, I’ve done Daytona, and we’ve won some races there.  And now it’s time to come back to Trans Am and help this series get where it needs to be— on top.”

Drissi began the race on pole with road racing icon Greg Pickett alongside and quickly found himself in a three-way battle for the lead with Pickett and fellow California native Kyle Kelley.   Drissi would weather two restarts and swap the lead with Kelley once, eventually distancing himself as Pickett briefly slipped off course and Kelley suffered an engine failure, allowing the No. 8 to pace the field en route to victory.

For Wall, the event marked a return to Trans Am—his last appearance coming at Mid-Ohio in 1985 and his return happening simply by chance.   A competitor with VARA on the weekend, Wall’s car suffered a mechanical failure early on, only to stumble upon a potential rental of the No. 7 on Friday.   After 30 years away from the TA class, Wall was able to work his way up from sixth starting position to second, completing a successful return to the Series he called home in the 1984 and 1985 seasons.

For Carolla, the event marked a beginning—his first professional race and first taste of Trans Am action behind the wheel of an 850-horsepower TA class machine.  Carolla began the race in fifth position, assuming fourth after the No. 66 of Greg Pickett went off course on lap 22.  Carolla would then keep with the top three before making the pass for third position on the 30th lap.  Over those final laps Carolla would hold the position, staying off the potential for Pickett to make a final gasp charge for podium placement.  For his progress throughout the weekend, “cool” approach and podium finish, Carolla was also awarded the COOLSHIRT Systems “Cool Move of the Race.”

Greg Pickett would finish the race in fourth position and set the fast lap of the race, a 1:20.839, while Ken Davis would complete the TA class top-five. 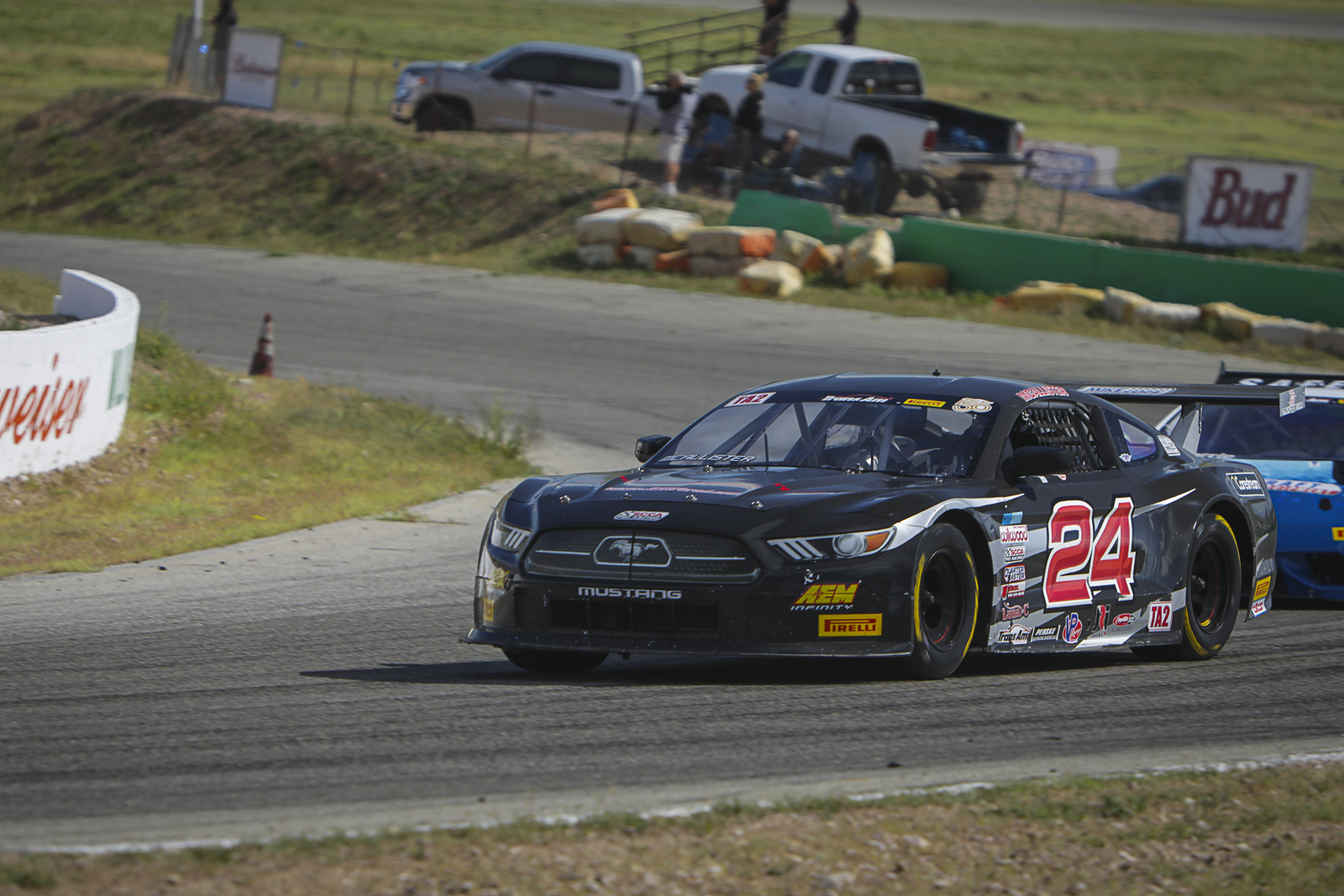 In TA2, it was debutant Brad McAllister, in the No. 24 PortlandImplantDentistry.com Ford Mustang, who captured victory in his first career Trans Am appearance.  McAllister began the race with a severe disadvantage, starting at the back of the Trans Am field after issues firing the No. 24 on pit lane on the start.

McAllister would remain patient, slowly moving up through the field and capitalizing on the race’s two, full-course yellows to catch up to the rest of the TA2 field.  On lap 28, McAllister managed to avoid contact in a three-wide pass in turn three to take the TA2 lead, one he never relinquished.  McAllister also set the fast lap for TA2, a 1:23.080.

“It’s really exciting,” said McAllister.  “We came here just hoping to finish the race and have a lot of fun getting ready for our home track, Portland; but we’ll take a win.  I’ve been running stock cars up in Portland, but I’m having a blast.  Nothing better than big V8 power, and the class is super competitive, and that’s what you want, a ton of competition with it and strict rules— I’m really excited to see it grow on the West Coast.” 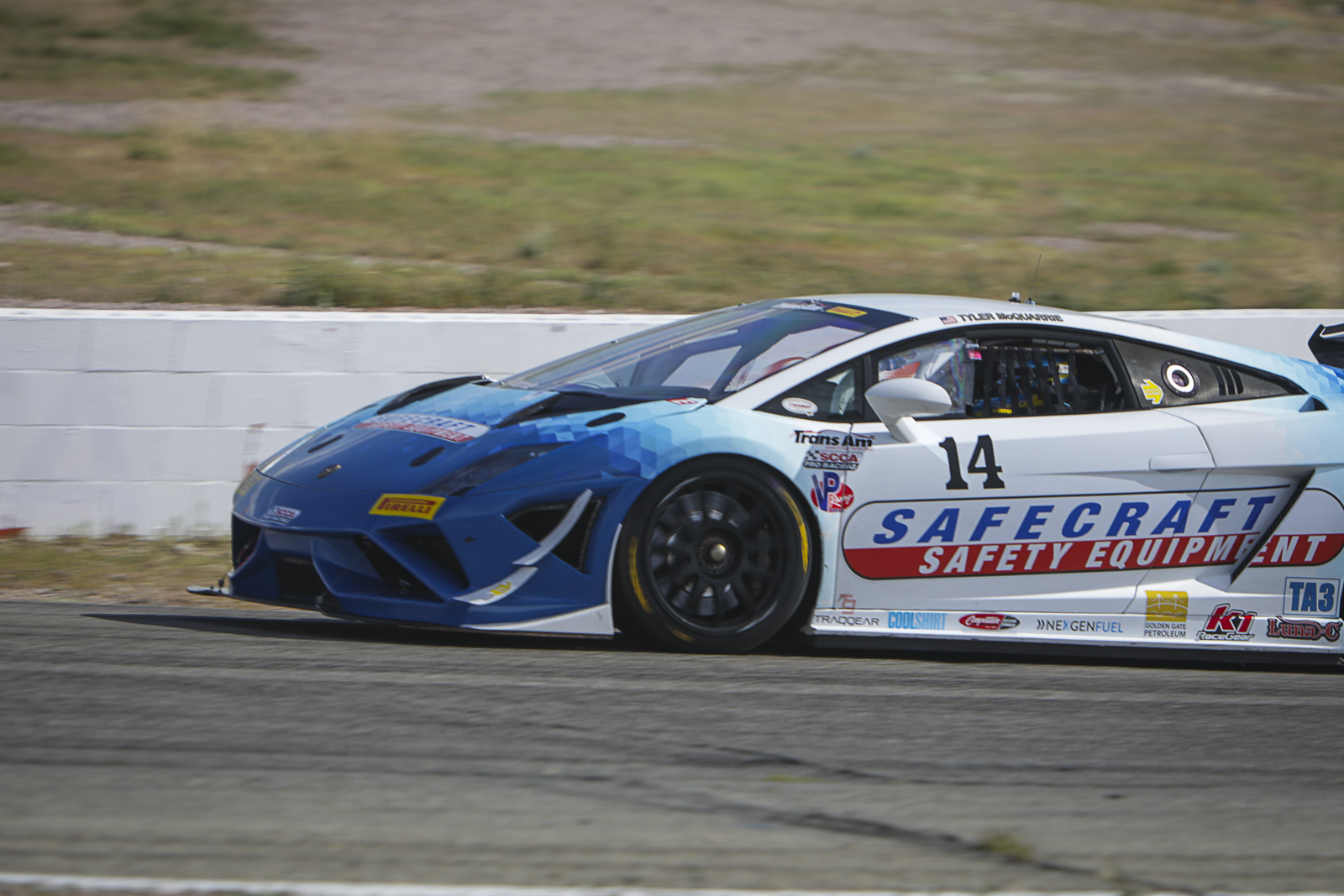 In TA3, Tyler McQuarrie, in the No. 14 Safecraft/ CLP Motorsports Lamborghini Galladro, secured the class win in relative comfort in his first Trans Am start— qualifying on pole and quickly distancing himself from second place finisher Oli Thordarson, in the No. 22 AlvakaNetworks/ Trackspec Motorsports Chevrolet Corvette, before finding himself racing alongside the majority of the TA2 class.

“Bringing the Safecraft Lamborghini here for the first Trans Am West race was exciting; we ended up qualifying upfront and knew we might end up racing with the TA2 cars.   Our car ended up doing so well on the Pirelli tires, especially towards the end when everyone else started sliding all over the place and I was able to be right there.  I got through an incident up in turn three a little cleaner than others, and I was starting to think about passing the leader to TA2 there at the end; but I figured it was best to stay right there.  A great event; I’m excited to be part of Trans Am and running the West Series and doing some events out East— so we’re excited, Safecraft is excited to be here, it was a good event for us.”

The event marked Trans Am’s first-ever appearance at Willow Springs International Raceway and will be followed by Auto Club Speedway April 29-30, Portland International Raceway July 29-30 and Circuit of The Americas November 3-4 for the remainder of the 2017 Trans Am West Coast Championship presented by Pirelli, an independent points championship from the Trans Am Championship presented by Pirelli.

The next Trans Am event comes in the form of Homestead-Miami Speedway, Round 2 of the 2017 Trans Am Championship, on April 8-9.