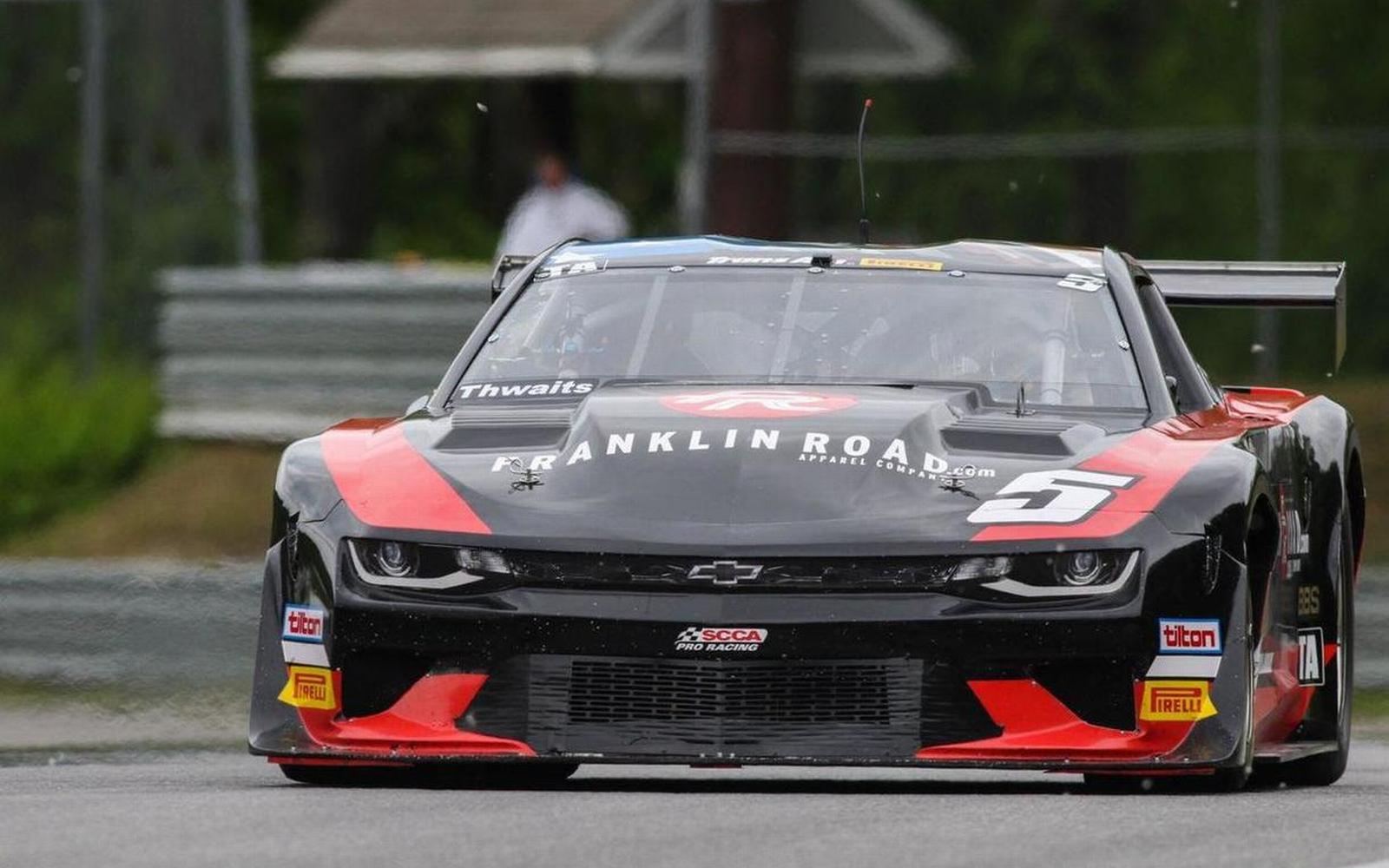 Franklin, TENNESSEE - May 31, 2021 - At a rain drenched Lime Rock Park circuit, 2020 Trans Am presented by Pirelli XGT Champion Ken Thwaits continued his progress in the TA Class ranks with another solid performance on Saturday to collect 17 Championship points for his P9 finish.

In treacherous conditions, pole sitter Ernie Francis Jr. spun early on when dueling with Chris Dyson thereby giving the Altwell CBD Ford Mustang driver a lead which he did not relinquish until the checkered flag. Ken progressed up to P6 in the immaculate black Franklin Road Apparel Chevrolet Camaro and was being highly praised by Adam Andretti for his smooth drive when as luck would have it the commentator's curse struck. On a drying track, the grip on Ken's wet weather tires failed him and he hit the tire barrier at the end of the front straight on Lap 50 in his No. 5 Chevrolet Camaro to bring about the first caution.

Ken was able to continue after being extricated but all-in-all it cost him over six minutes and shuffled him to the back of the Trans Am pack. It was disappointing for Ken who already looks very much at home among the elite Trans Am pack. He had been gaining on David Pintaric ahead of the mishap and a top five finish had looked very much on the cards.

We spoke to Ken after the race and he was philosophical about the events, "The nose was crushed but the side door didn't even have a scratch on it. I felt fine. The weekend went fantastic but I am disappointed about making a mistake. I overshot my brake marker and in a wet race, it feels like driving on marshmallows!"

“I really feel like overall the weekend was great. I ran excellent lap times in the first session, my first time on the track. Which was just about two seconds from the leaders, Chris Dyson and Ernie Francis."

Ken began the weekend by posting a time of 52.341 in early testing on the tight, relatively short Connecticut track. He improved that to 52.323 in official practice before a heavy storm wreaked havoc with the official qualifying session and meant Ken was unable to record a time.

"It rained for qualifying, we ran a rain setup. We run two laps and they send a radio message that the transponder isn't working. All this during a nine minute qualifications session. We started at the back and just worked on passing cars one-by-one and it was going well. We did have some problems with the transponder during the test session too. This is costly when looking at limited track time and laps that we get on a race weekend."

A best lap in the race of 57.638 was indicative of how much the track had slowed down due to the inclement weather.

Ken concluded by saying, "I am more happy about the progress we made this weekend than I am upset about the mistake at the end of the race. We ran some great lap times during the race, the speed is there and it's just a matter of keep working and going the right direction."

Next up for Ken is indeed Mid Ohio at the end of June when Ken will aim to be competitive again and take the next step forward in this, his first season in TA Class racing while Ken's involvement with Trans Am is underscored by his flagship partner Franklin Road Apparel presenting some terrific Trans Am branded gear for 2021. Franklin Road has super high quality t-shirts, polo shirts, button shirts and caps bearing smart renditions of the famous Trans Am logo. Go and find them at https://www.franklinroad.com/search/trans+am/