TeamSLR Duo Set for Trans Am Season Finale at COTA 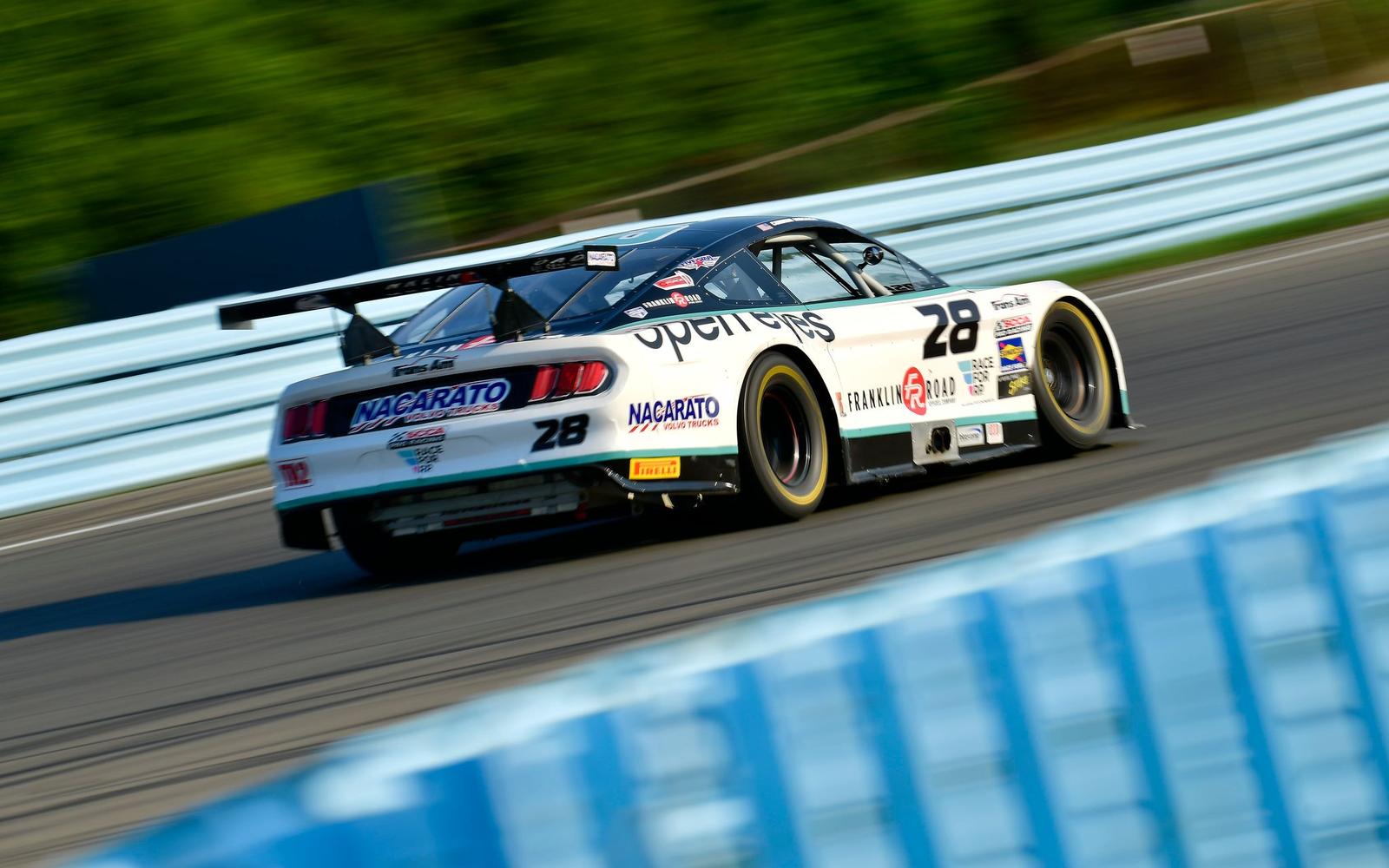 ST. AUGUSTINE, Fla. (Nov. 1, 2022) – With 11 races down and one to go, the Trans Am Series presented by Pirelli is set to end its season this Sunday at Circuit of the Americas (COTA) in Austin, Texas.

TeamSLR driver Connor Mosack looks to put an exclamation point on his second year of TA2 competition with a victory in the 30-lap, 75-minute race around the 3.426-mile, 20-turn road course so he can secure a career-best second in the final championship standings. Mosack will have a wingman in driver Chris Liesfeld, who returns to TeamSLR for his fifth start of 2022. The duo will be part of a record field of 55 TA2-class entries that eclipses previous high of 52 cars that took the green flag for last year’s season finale at COTA. Mosack will again wheel the No. 28 Open Eyes/Nic Taylor Custom Fit Underwear/M1 Racecars Ford Mustang while Liesfeld returns to the No. 96 Fields Racing/M1 Racecars Chevrolet Camaro.

Mosack finished second last year at COTA to clinch third in the championship. The 23-year-old from Charlotte, North Carolina, set sail in 2022 with nothing but the championship in mind. Despite some early season challenges, he was a model of consistency, scoring a series-best five pole positions and rallying his way into title contention with four podium finishes that included his second career victory at Watkins Glen (N.Y.) International in September. He was within striking distance of the title heading into the season’s penultimate round at Virginia International Raceway (VIR) in Alton on Oct. 8, entering the weekend 16 points behind two-time and defending TA2 champ Rafa Matos. Mosack took the checkered flag in second place, ahead of Matos, which would have narrowed the 16-point gap heading into this weekend COTA. But Mosack was assessed a 40-second penalty for contact deemed avoidable, moving him down to 17th in the official finishing order. He heads to COTA second in the championship, but an almost insurmountable 30 points behind the front-running Matos.

Bettering last year’s third-place finish in the final standings would be a bittersweet consolation for Mosack, who will be racing as a newlywed for the first time after marrying his longtime sweetheart, the former Daryn Lundberg, on Oct. 15. To do so, he’ll need to ward off the challenges of veteran Thomas Merrill, who’s two points back in third place in the championship, and newcomer and VIR race winner Brent Crews, who’s another point back in fourth. Mosack and Crews occupy the top two spots in the Peter Gregg Young Gun standings with just three points separating them.

Liesfeld is coming off a 13th-place finish at VIR, his best result this season and equaling the 13th-place run he earned on the streets of Nashville, Tennessee, in his first of three TA2 outings last year. The 47-year-old Liesfeld owns and operates Fields Racing, which has competed in an array of racing disciplines over the years, including Stock Car Championship Series, Spec Miata, SCCA Pro, and Trans Am.

Meanwhile, in the race within Sunday’s TA2 race, Jeff Holden of Snohomish, Washington, will look to clinch the 2022 Trans Am Western Championship TA2 title in M1 Racecars equipment. The 37-year-old driver of the No. 11 RelaxAndCBD.com/Dakota Lithium/Mid Valley Transmission Chevrolet Camaro holds a 12-point lead in the driver standings over Ken Sutherland behind three wins and a runner-up finish in the season’s first seven events.

Riding along with TeamSLR once again this weekend is ScreenYourMachine.org, an initiative created in 2016 by TeamSLR founder Scott Lagasse Jr., a colon cancer survivor, in partnership with the American Gastroenterological Association (AGA) to educate individuals about the importance of getting age-appropriate screenings for all types of cancer.

“I was still in my early 30s when I was diagnosed, but I knew something was wrong so I didn’t waste any time and I went and saw my doctor,” said Lagasse, whose quick decision paralleled his quickness in a racecar. “They caught it early and that was my saving grace. The treatment worked, but young-onset colorectal cancer is rising. I wasn’t some outlier. In people ages 55 and younger, incidence is rising by two percent every year.”

What’s your mindset as you head to COTA second in the championship?
“This is our first race where points really don’t matter, so we’re going to go there with the mindset of trying to maximize the weekend. It’s really win or nothing, that’s really what we’re going there for, so we’ll do whatever it takes. I think we had the speed there last year, and we’ve been faster everywhere we’ve been this year. I think that’s a good sign, and hopefully we can go finish this year off with another win.”

How differently do you execute the race when you’re not as concerned about points?
“It definitely changes things a little bit. When you’re really focused on the big picture, the whole season, especially earlier in the year, you’re a little bit more willing to give and take and you’re OK with finishing second or third or fourth some days when your car’s not all there. You may not race guys as hard as you could just to make sure you get a good finish. At COTA this weekend, if it comes down to the last few laps and we’ve got a shot, we can be all the more aggressive without a championship to lose.”

You saw COTA for the first time last year and came home with a second-place finish that clinched third place in the championship. How helpful will it be to head back there a second time?
“Having past experience there will be huge. It’ll matter more than at any other track we go to just because of how complex COTA is. It’s got so many corners and they’re all different, so it’s just a place where the more you go, the more comfortable you get there and the faster you’ll be. I feel like my experience there last year will help us right out of the gate and we can just continue to build on that. I’ll know more of what I’ll need out of the car, as well, and that’s always really important when it comes to having good speed all through the weekend.”

There is just so much to that racetrack. Where would you say are the best opportunities to make gains?
“You have a lot of passing zones there, but you also have a lot of areas where you can’t pass, either. You’ve got a few straightaways where you can definitely take advantage of someone going into the harder braking zones, and that’s definitely where we’re going to have to make most of our passes, at least on guys who are close to our speed. Turn one is always a good place to pass on the way to the back straightaway. Those are some pretty good corners to be able to outbrake somebody. You definitely want to be able to make a move into turn one if you can because if you don’t get them there, you’re pretty much stuck behind them all the way through the esses until you get to the back straightaway.”

How would you assess your second season in TA2 with TeamSLR?
“I feel like it’s been a really good season. I’ve been really happy with the team and our speed and the cars we’ve brought. It’s been a big step up from last year, and I think that’s all you can ask for. Obviously, we’re a little disappointed we haven’t won more races this year, but we’ve been on the pole or finishing second or third at a lot of races this year. Just had a couple of DNFs (Did Not Finish) earlier in the season and that put us behind, points-wise. That’s part of racing, sometimes, and I feel we’re going to do our best to overcome that and hopefully come home with a win this weekend to cap off the season. These cars are a lot of fun. I love working with the Lagasses.”

What are your thoughts as you head to COTA for your fifth race of the season, and with the experience of having raced there for the first time last year?
“Going to COTA last year for the first time, I had a little work on the simulator before getting there, but obviously nothing compares to actually being there. With the time we had to work with, it was all about learning the track and trying to get up to speed in the process, and we came away with a 20th-place finish after a kind of up-and-down race. Going back there this year will be more about working on myself and finding more speed, not so much about just figuring out the track. Coming off of VIR, I’m feeling good after that race. I really need to carry that momentum to COTA because I feel like I’ve been improving, I’ve been getting better as a driver, and I feel like every race I’m seeing improvements in myself. Hopefully I can finish near the front of the field, which will make me feel better going into next year.”

How would you describe COTA?
“The fast part of the track at COTA on the way to the backstraight is a lot like my favorite types of tracks like Lime Rock and VIR and Watkins Glen. I do enjoy the higher-speed stuff like that because they’re just scary enough that I guess you have to have respect for it. When you get to the hairpin turns, they’re not my favorite. I get frustrated sometimes trying to keep patient, and COTA has its share of those, which I thought I struggled with last year. It takes discipline and that’s something I’ve been working on. When you get to the low-speed stuff, it’s really easy to just want to jump on the throttle, but when you do that, it can mess up your lap. So that’s been getting a lot of my attention, lately.”

This will be your fifth and final race this season after returning from a lengthy hiatus to drive in three races last year. How would you assess your progress as a driver?
“I’d definitely like to do more than five races. It’s just a matter of trying to balance it out with the other things going on in my life. A huge part of it has been about managing expectations at the racetrack. If I only do five races, as long as I’m getting better, that’s what’s important. If I could just make it to the races at the beginning of the season, that would help the cause a lot, not having to work so hard to get caught back up again like I have to by starting midway through the season. I’ve improved this year, but it’s not where I want to be. I can do better. Linking all the corners together on any given track to find that perfect lap, that’s what it’s about, and then doing it again the next lap, and the one after that, and so on. When I can consistently put together fast laps, then I’ll really start to feel good about it. When you know you can do that but you’re not able to make it happen on a regular basis, it gets to be a little frustrating, but that’s part of the challenge and that’s what I’m chasing.”