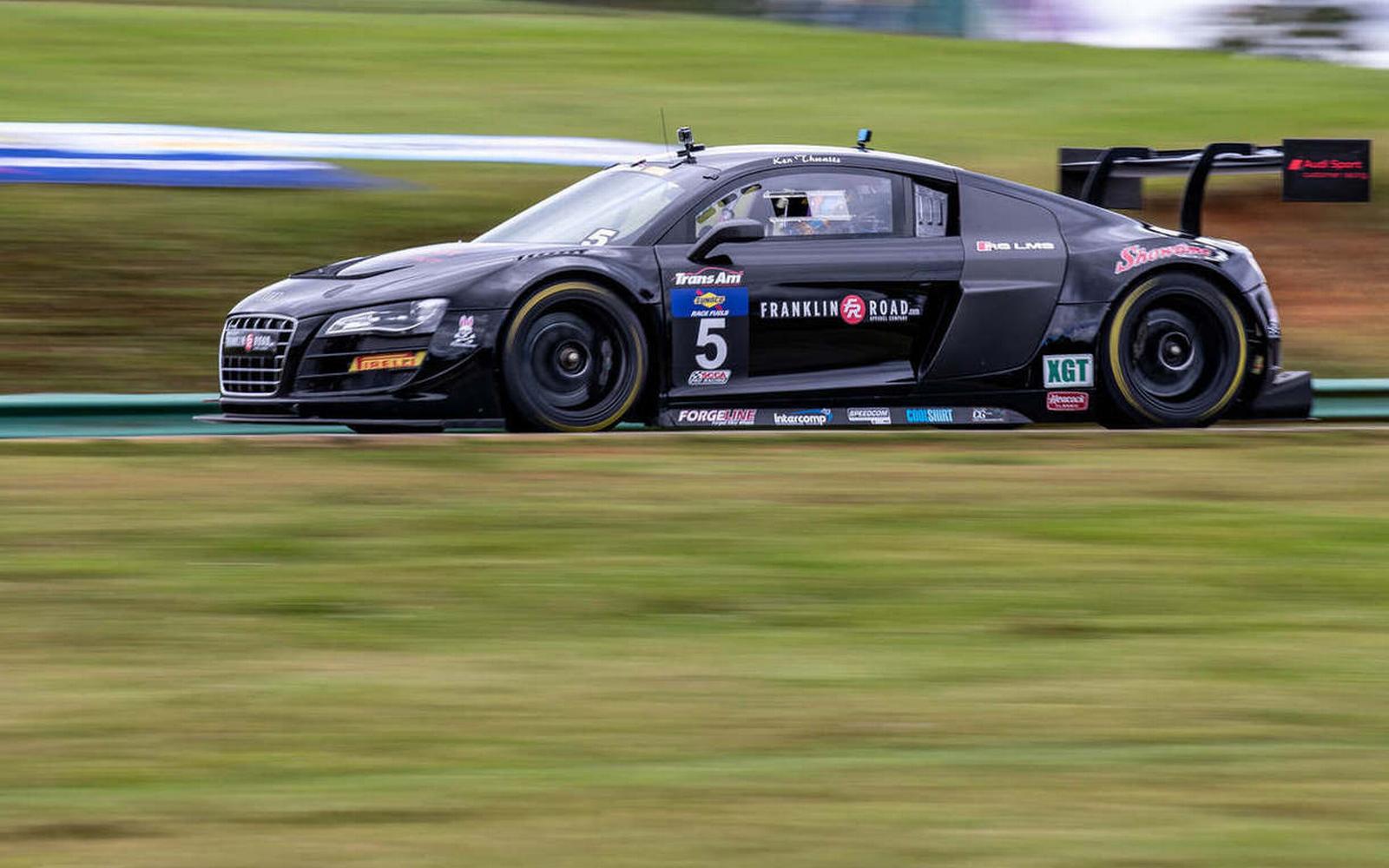 Innovation and enterprise are often rewarded in motorsports and so it is proving for the highly motivated Showtime Motorsports team backed by Franklin Road Apparel and the popular Ken Thwaits.

The stunning black No. 5 Audi R8 LMS Ultra Ken pilots has become such a fixture on the Trans Am grid. As things stand, Ken sits atop the 2020 Trans Am presented by Pirelli Championship in the XGT Class with 191 Championship points, 41 points ahead of chief rival Erich Joiner. A hat trick of wins at Brainerd, Road America and in the first race at Virginia International Raceway mean that Ken is in pole position to secure the inaugural XGT title, and that's very much his focus as he explained to us this week.

"I've really enjoyed doing this first full season in Trans Am. Obviously it's been a uniquely difficult year for everyone, but hats off to the Series for rescheduling the cancelled races and running things well at the events." Of his rivalry with Erich Joiner, Ken added, "Erich and I love racing together, we've had a great battle all season and I'm sure it will continue all the way to the season finale at Laguna Seca."

Ken's Audi R8 LMS Ultra has been mixing it with the TA Class cars in lap times and he was quick to pay tribute to the durability of the Audi R8 when he added, "The Audi I'm driving is a model of German engineering and is unbelievably reliable. It just doesn't break, unless you do something of course! We are still getting to know the car and trying to go faster every time and we know our competitors are as well."

On two occasions this year there have been two Showtime cars on the XGT grid, Kevin Long at Brainerd and Josh Hill at Road America doing the steering in the white liveried No. 15 Audi R8. Ken himself is keen to have a regular teammate, and the seat remains available for the remaining five races as he explained, "The intention has always been to run two cars, and the opportunity is there for the right person. We will prepare and setup the car to the same standard as my car, with full computer diagnostics and the works. It's a ready made, high-level motorsports program as well as being a whole lot of fun!"

Next up for Ken this season is a trip to the Formula 1 designated, state-of-the-art Circuit of The Americas just outside of Austin, Texas. It's where Ken first got a taste of Trans Am last year, winning the Super GT Class race in the Audi over driver Lux in the Dodge Viper. On that occasion Ken clocked a fastest lap of 2:18:804, a figure that will no doubt be in his mind when he returns there next month, "We had a great time at COTA last year. It's a fabulous facility and winning the Super GT race was the icing on the cake. I want to win there again!”

After the single race at COTA, John Clagget and his team have cleverly set to double-up both at Road Atlanta and at Laguna Seca for the last two meetings of the year. On both occasions the weekend will follow the highly successful model of VIR, with TA, XGT, SGT and GT cars racing together on the Saturday, with a separate race for the TA2 cars; then on Sunday there is a spectacular all class race with a staggered grid of over 40 cars!

There is no doubt Trans Am has a lot more to offer fans this season and Ken Thwaits and Showtime will be competing as fiercely as ever. Download the new Trans Am App and watch the race events live from the Google PlayStore or Apple.

Visit the team’s website for more information on Showtime Motorsports, showtimemotorsports.net. Learn more about Showtime Motorsports team partner, Franklin Road Apparel, at franklinroad.com and keep up to date with the Trans Am Series presented by Pirelli at gotransam.com. #GoTransAm