Silver Hare Racing Hits the Home Stretch at The Glen 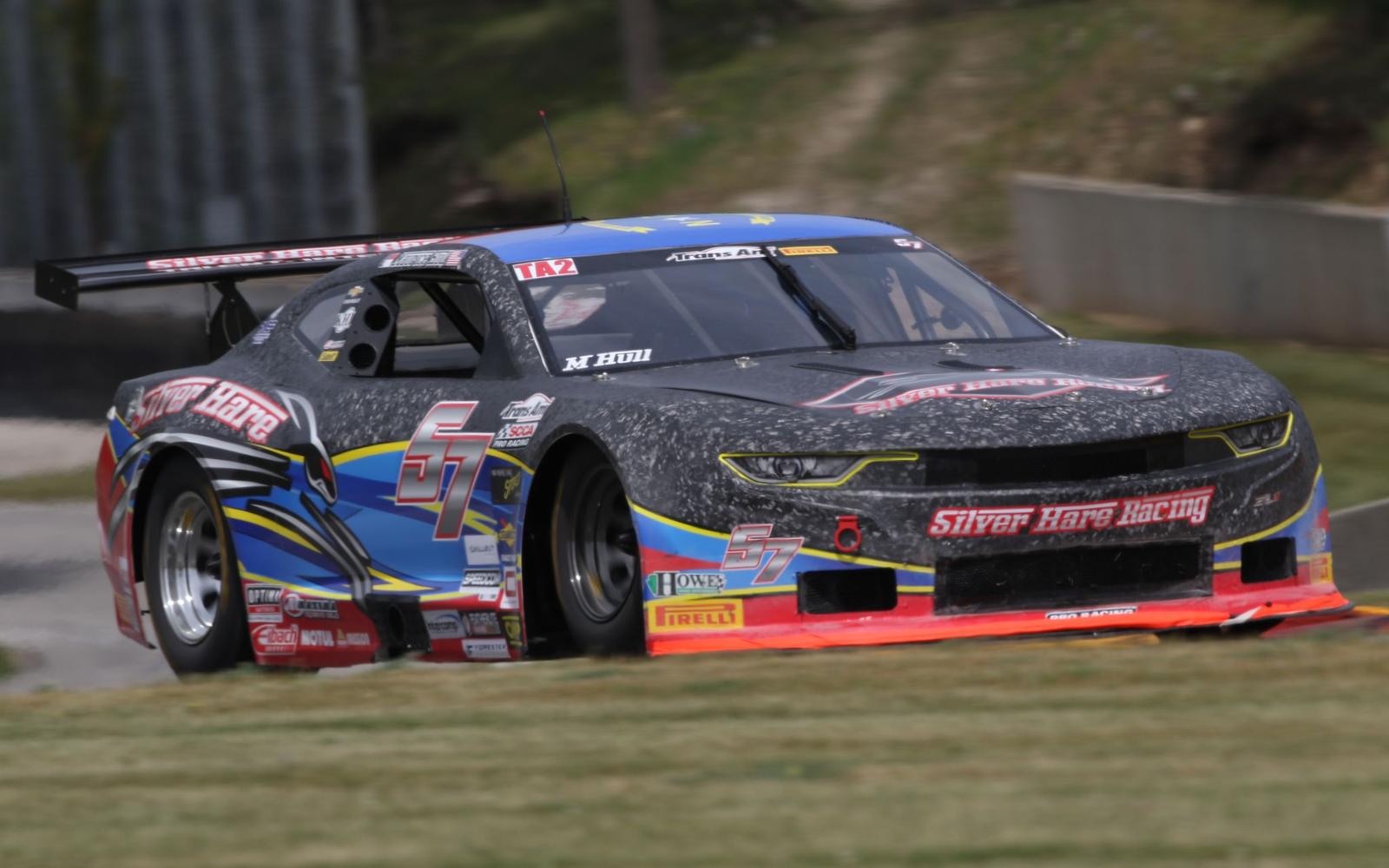 HIGH POINT, N.C. (Sept. 7, 2022) – The Silver Hare Racing duo of Maurice Hull and Connor Zilisch are hitting the home stretch of this year’s Trans Am Series presented by Pirelli campaign as they set up shop in New York’s scenic Finger Lakes Region for this weekend’s Watkins Glen SpeedTour festivities.

The historic 3.4-mile, 11-turn circuit at Watkins Glen International plays host to the 10th round on the 12-race calendar for Trans Am competitors, and the Silver Hare Racing camp is focused on delivering its best showing of 2022 during Saturday’s 30-lap, 75-minute TA2-class race. After this weekend, only the Oct. 8 race at the High Point, North Carolina-based team’s home track of Virginia International Raceway (VIR) in Alton, and the Nov. 6 race at Circuit of the Americas (COTA) in Austin, Texas, remain on the schedule.

Hull, who co-owns the team with his wife Laura, returns to Watkins Glen in the No. 57 Waukegan Farms/Silver Hare Racing Chevrolet Camaro he drove to finishes of 17th and 18th, respectively, during a Saturday-Sunday doubleheader weekend at the track last September. The three-time TA2 Masters champion will be making his fifth start of the year. He was this season’s top Masters finisher twice in his previous four events – March 26 at Michelin Raceway Road Atlanta in Braselton, Georgia, and July 3 at Road America in Elkhart Lake, Wisconsin. In last year’s Watkins Glen doubleheader, Hull was part of a three-car Silver Hare Racing effort that was highlighted by Tyler Kicera’s runner-up finish in the Sunday race.

Zilisch, the 16-year-old from Mooresville, North Carolina, will be paying his second visit of the season to the iconic Watkins Glen circuit this weekend. A fulltime competitor in the prestigious Idemitsu Mazda MX-5 Cup Series, which had a doubleheader weekend of its own at The Glen June 24-25, Zilisch showed his penchant for getting up to speed quickly by qualifying on the pole for the first race. An unfortunate turn of events brought an early end to his victory bid in that race, but it set the stage for a stellar rally from the back of the 28-car field in the second race that netted a sixth-place finish.

Zilisch has been busy since that outing. The same weekend he drove to a sixth-place finish in his Silver Hare Racing Camaro July 3 at Road America, Zilisch drove to victory in both the Saturday and Sunday MX-5 Cup rounds at the track. And his MX-5 Cup hot streak continued Aug. 27-28 at VIR when he finished second in the Saturday race and won for the third time in four races on Sunday.

It’s the kind of speed Zilisch has exhibited in Trans Am since his series debut last October at VIR, where he became the youngest pole winner in series history with a lap of 1:48.905. In this year’s Round 2 on the Charlotte (N.C.) Motor Speedway Roval in just his third-ever Trans Am outing, Zilisch laid down the fastest practice and qualifying laps, as well as the fastest lap of the race.

Silver Hare Racing leverages its Trans Am effort to promote its arrive-and-drive program, where aspiring racers and even tenured professionals hone their road-racing skills on some of the most revered tracks in North America. NASCAR Cup Series drivers Daniel Suárez, Christopher Bell, William Byron and Harrison Burton have all wheeled Silver Hare Racing-prepared cars to burnish their road-racing abilities in top-flight equipment.

The team offers six, professionally built and maintained TA2 chassis from Howe Racing for both competition and private testing. Silver Hare Racing has a dedicated, fulltime crew and operates out of a state-of-the-art facility in High Point. At the track, two 53-foot Featherlite transporters serve as the team’s base, each outfitted with a lounge and smart TVs for data and video review, as well as for hospitality.

“With NASCAR having so many more road-course races, it’s our goal for Silver Hare Racing to be the preferred team for drivers to get that road-course experience,” said Laura Hull, Silver Hare Racing co-owner and team manager. “We want to be that important step in the ladder for the young, up-and-coming drivers like Connor, which we’re doing in collaboration with Kevin Harvick Incorporated.

“It started when they brought him to us for testing at VIR a year ago, and now we’re delighted to have him under contract. That’s how we’re trying to position this. We want people to know we have an arrive-and-drive program, where people who want to run this track or another, we provide the opportunity for them to do that and be successful.”

Maurice Hull, owner/driver, No. 57 Waukegan Farms/Silver Hare Racing Chevrolet Camaro:
“We’ve been working really hard with our Silver Hare cars and we think they’re going to be fast. They’ve been fast, and we’re looking forward to hopefully some cool weather so we can take advantage of that this weekend. This track is a very fast road course. It doesn’t have a lot of low-speed corners. And there’s going to be another large field as we usually have some extremely talented drivers looking for a one-off race who tend to show up for this race, which always makes it interesting and adds to the excitement.

“We’ve run vintage cars up there several years, and we ran both (TA2) races last year, so I’m very familiar with that track as well as any of them. It’s always fun to run that track. I like it because it’s fast. It’s a rhythm track, so you really have to focus on getting into a groove. It’s definitely one of those tracks where you really have to keep your speed up, too – very much a momentum sort of thing. But while you’re focused on your rhythm and your momentum and keeping your speed up, when you consider you’re racing 40-something other cars out there, Watkins Glen becomes something of an enigma. There’s always the potential for more than the usual amount of carnage, so one of the keys this weekend will be to finding your way through it. If you’re able to do that, you’ll more than likely end up with a really good finish.

“Connor’s been really fast at tracks like this one, kind of like Road America, so I’m looking forward to seeing what he’ll be able to do. He’s full of confidence and he’s been winning and doing really well in the other series he’s been racing in between our Trans Am races. He’s been working hard on the simulator and getting himself ready for this weekend, so I think he’s going to be really fast.”

Connor Zilisch, driver, No. 5 Silver Hare Racing/KHI Management Chevrolet Camaro:
“I just want a good finish. We’ve been getting better all year and I think this weekend we’re really going to have some big gains when we show up. We’re looking to get a good finish for the team to get us some confidence going into VIR and COTA and hopefully we can end up the season strong these last three races. It’s been a tough year, we’ve had some not-so-good luck that’s plagued us, but we’ve fought through it and have kept our heads high, and we’ll just try to do what we can to get us those good finishes. I really think it’s going to come together for us these last few races of the year and I’m looking forward to it.

“I saw Watkins Glen for the first time in the MX-5 Cup series earlier this year and got the pole for the first race, but it turned out to be not a fun Race 1 because I backed it into the wall. But Race 2, I started from the back and made my way up to finish sixth. I definitely liked the track and I think we’re going to be fast this weekend, and hopefully I can adapt to it in the TA2 car pretty quickly and get up to speed.

“Watkins Glen is a super-nice area, a beautiful part of the country. The track itself is high-grip, high-speed, big commitment. There’s the chicane, where you’ve got to be pretty aggressive, and you just have to push the corners to what they can take but not go over that because there are some walls there that will bite you. It’s really about finding that limit and kind of staying on that threshold – that will be the key to success this weekend. Staying at 99 percent and having a good car that can do that comfortably is what will make us successful. It is a physical track, for sure. Everywhere you go, there’s another corner. No straightaways, no really low-speed stuff. It’s definitely going to be a physical race and I think just getting used to the track and being able to adapt to it quickly will really help me.

“We’ve had some good races since Nashville. Three weeks ago I won in the MX-5 Cup at VIR. I was able to get myself a first and a second that weekend. We won a Late Model race at Hickory, as well, so we’ve been doing well and hopefully that will translate to TA2 this weekend because I feel like we really need it.”

About Silver Hare Racing:
Silver Hare Racing is a fulltime competitor in the TA2 division of the Trans Am Series presented by Pirelli. The multicar team has won the TA2 masters class championship three times (2018, 2019 and 2020) with driver and team co-owner Maurice Hull. Under the leadership of Hull’s wife, co-owner and team manager Laura Hull, Silver Hare Racing provides a variety of services that includes private testing and arrive-and-drive programs. The team offers six, professionally built and maintained TA2 chassis from Howe Racing and operates from a state-of-the-art facility in High Point, North Carolina. For more information, please visit SilverHareRacing.com.