“COTA was our best race of 2021”, says Carl despite finishing the TA2 season finale in 15hth with a wounded car, 2nd among the TA2 West Coast drivers. What may at first seem like a puzzling remark from the Swedish American racer sounds completely different when looking under the hood of that statement.

Rydquist fired off the final race of the Trans Am Series presented by Pirelli with a rapid jump from 12th to 8th through the first three turns. He then fended off draft pass attempts by late braking and no-contact door to door racing.

“Drafts were a huge challenge but thankfully the No. 47 Nelson Motorsports/GroupWholeSale/Optimal Stunt Ford Mustang was awesome on the brakes and quick everywhere else, so I was able to build a gap and pull away. Then it felt really good to have the chassis under me to watch Andretti, Self, Lawrence, Merrill and Mosack battle right in front of me and to manage tires and think about strategy from that spot”.

Rydquist’s status quo in 8th remained in place after the first restart and he built a comfort gap quicker than at the initial start. However a power loss shortly thereafter saw Woslowski and Kicera race past, followed by Prociuk, Anderson, Boes, Sutherland, Griffin, Borchetta and Atwell.

“That felt so unfortunate,” Carl shares. “In the car you feel this subtle reduction in acceleration and then cars grow big in the mirrors and blow by like out of a different class. And there’s literally nothing you can do.” 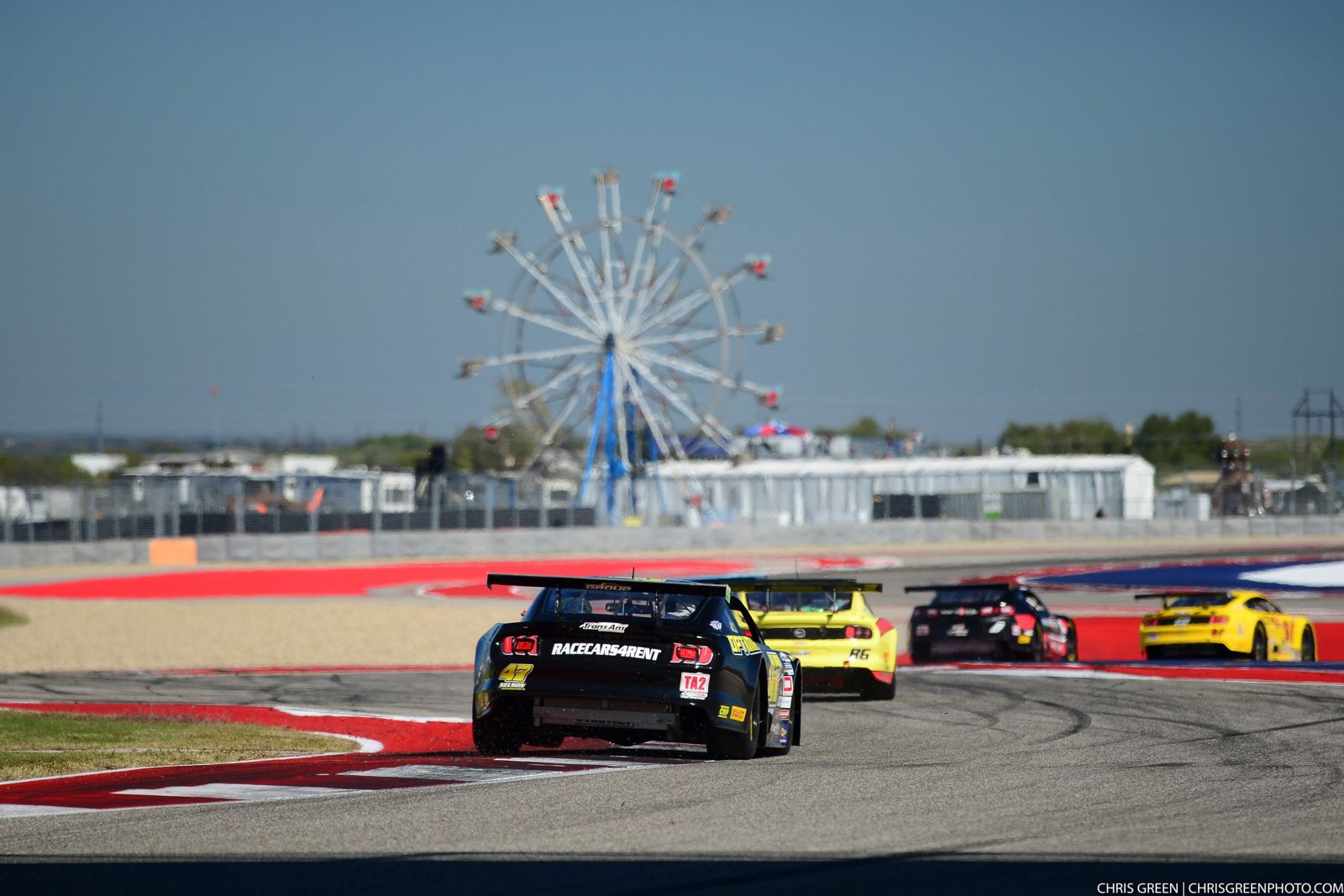 With pressures and temperatures looking good, Rydquist cycled the ignition switch under braking into Turn 12 and this restored full performance from the motor. He set off to make up for lost ground but the power loss issue repeated itself throughout the race. Rydquist slipped backwards down the field to 17th while cycling ignition to gain back power each time.

In the final laps of the race Rydquist found himself in 13th overall in a ferocious pursuit of the TA2 West Coast win rather than an anticipated overall top 5 battle. Rydquist made the pass on Sutherland for the TA2 West Coast lead through the esses with a lap and a half to go but once again lost power, slipped back and couldn’t recover the gap that followed. Rydquist finished 2nd among the West Coast drivers, 15th overall.

“Congrats to Ken, he absolutely drove the wheels of that Camaro and I really enjoyed the battle,” says Carl. “After appraising our race it was all positives what had just played out. This race was our opportunity to try our speed at the National level at the end of my first season in a TA2 car. The first 15 laps were so rewarding, running steady and close to the front is a luxury because it reveals what steps to take next. For that reason, COTA was our best race of 2021.”

“Thank you to everyone on the Nelson Motorsports team for preparing and providing a fast championship winning ride and operation. Thank you to my spotters True Tourtillott and John Babbidge for executing these races together. And thanks to OptimalStunt and my wife Jennifer for making this TA2 campaign possible.”