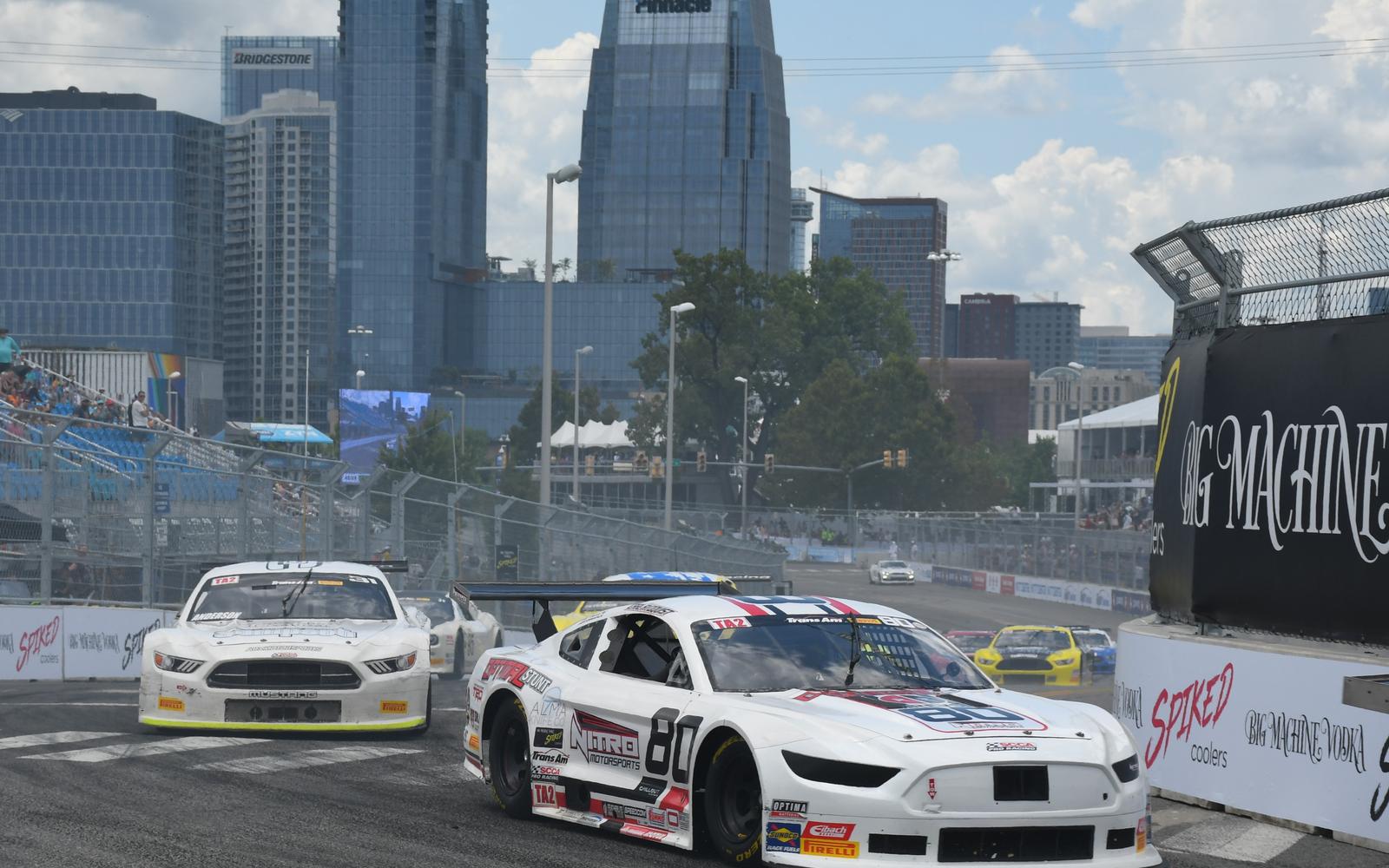 “My Nashville, best summarized, was an amazing hard shot on goal that just struck the goal post!” said Rydquist on his social media. “It's ok. It will come. So enjoying the journey. I feel so fortunate to be able to do this and to share these times with such fun and talented friends.”

The 2nd running of the Big Machine Vodka Spiked Coolers Music City Grand Prix kicked off with a Thursday night Fan Fest on Broadway, where thousands of fans were able to connect with teams, drivers and sponsors right in the heart of summer time Nashville.

Fans got to sit in TA2 cars and see them up close, family, friends and teams were going in and out of the adjacent restaurants for delicious food to extend the hangout. And being the music capital of the USA, live bands provided rowdy rock’n’roll soundtracks that echoed loudly over the colorful race cars on Broadway.

Switching into race mode for Friday, Rydquist put the #80 Nitro Motorsports Ford Mustang 3rd in the time cards for the opening practice, demonstrating the team’s commitment to race out front. This also completed Rydquist’s first goal of the weekend, to grid among the Top 20 fastest drivers for qualifying, something that reduces the risk for traffic impeding a fast lap.

In qualifying, Rydquist still caught traffic and backed off on two occasions to build tire heat and to open a larger gap for the next lap. The session was halted for track operations to remove a stalled car and the team counted the minutes remaining of the session in hope of another shot. The opportunity came when the green flags waved, but this time Rydquist took the car too deep into Turn 9 and had to abort the lap.

“Big error on my part, I have to completely own that. I thought it was a throwaway session, lap, and explored the limits ahead of the race instead of finishing the lap properly. But seeing the data afterwards, I was on a quick lap.” Rydquist said. “I felt sorry to let the team down, they brought such a great car.”

Preparing for a run from 18th grid position, Rydquist set out for a long race of patience and passing. The race saw a handful of early crashes and spun cars, while Rydquist’s race went on uneventfully. By lap 15 of 46 he had moved the #80 Nitro Motorsports Mustang up to 13th place.

Following a full course yellow, the TA2 field set off cleanly once more on lap 22. A lap later the Nashville crowds got to see the #80 Nitro Motorsports TA2 Mustang perform a full 360 spin towards T4.

“Things were solid until that point. I came around the bend and caught a glimpse of smoke from a car ahead, another car wobbling and then the rear broke out on what felt like fluid on track, it just got slick” says Carl. “I looked at videos later on and another car right up ahead was billowing smoke there, what bad luck. Definitely not an intentional driving stunt!”

The spin caused minor splitter and rear bumper contact with the wall. Rydquist pitted for a safety check before proceeding on the lead lap. With two extended periods of full course yellow limiting the opportunity to charge back through the field, Rydquist moved up from 27th to finish 23rd.

“Definitely wished for more but happy to have a fast car all the way to the checkered flag. Thank you to Nick and the Nitro Motorsports team, spotters John and True who did an amazing job with the car and got us through the field,” Carl said.

The broadcast of the Big Machine Music City Grand Prix  presented by Big Machine Vodka SPIKED Coolers and Race for RP, will air on CBS Sports Network on Saturday, August 13 at 7:30 p.m. ET, with an encore presentation later that evening at 1:00 a.m. ET.

Livestream replay is available at: www.Youtube.com/TheTransAmSeries