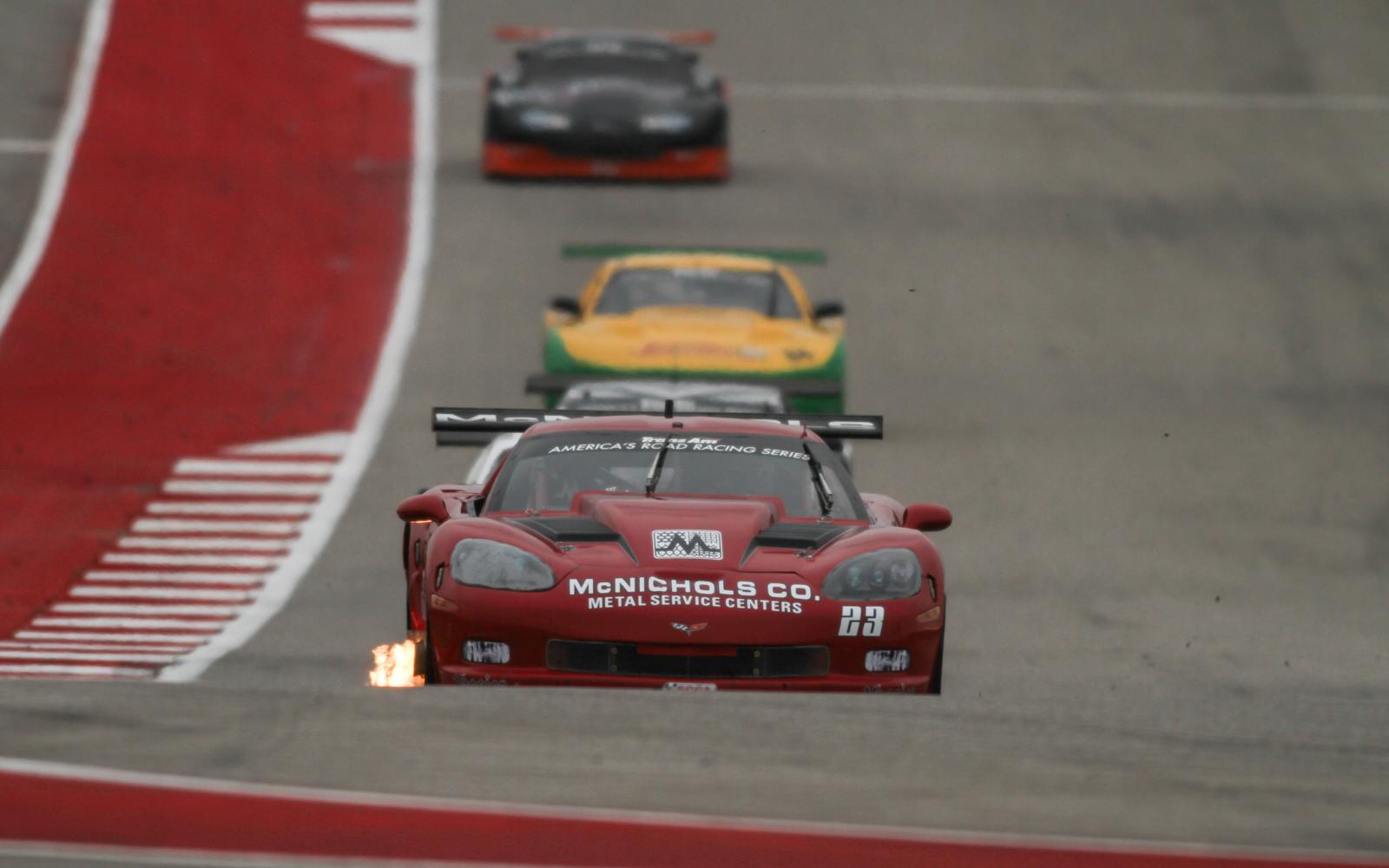 TEAM RELEASE: Austin, Texas – It was a Texas sized weekend for the Trans Am Series and it was Ruman who had a Texas sized win late Saturday evening at the Circuit of the America’s (COTA) course. Ruman garnered her 7th win on the season and gained valuable Championship points heading into the final round.

The inaugural Trans Am Series race at COTA was set to be a big battle between Ruman and Fix, who were only separated by 11 points heading into Round 11. The rain held off for most of the weekend, until race day Saturday morning. It was a very cool, windy 57°, skies eventually remained cloudy and the track started to dry for the 4:15pm CT race.

Ruman did not have the qualifying session she hoped for and put the No. 23 McNichols/Don Sitts Auto Chevrolet Corvette 5th on the grid for the start of the race as competitor Fix secured the pole position. However, the start of the race proved to be strong for Ruman as she immediately jolted up to 2nd place by the exit of turn one. She then went to work, keeping close pace with Fix who was running in first. The one-two pair ran out in front of the pack for a dozen laps. Ruman took over the lead as Fix suffered a mechanical failure on lap 12. After a series of cautions, Ruman and Ebben put on a true Trans Am showdown in the final laps of the race, with Ruman edging him out for the win on the final lap of the race.

“We had an excellent start to the race,” said Ruman. “We took them three wide into one, made up some ground and moved from fifth to second right off the bat. Then I was right with Paul the whole time; he was setting good lap times but so was I. I knew he was quicker in a couple spots, and then I was a little quicker in a couple spots. I just wanted to let the race come to me and be patient. After he (Paul) broke down, we went past him and set sail a little bit. We encountered a little engine problem—we broke a header and went down a cylinder. But we knew the yellow was coming so my main focus was to stay smart out there, try and get the win if possible, or stay on the podium— just get as many points as we could. Cliff got by me on the restart, then we had another yellow, and on another restart I made my move—we went side by side through the entirety of the esses and I finally passed him on the uphill. We went through probably five turns side by side; it was amazing. We didn’t touch each other—that’s what Trans Am Racing is all about. It’s won on the track, not off the track. We have respect for each other, and I couldn’t be more proud of my team. To God be the Glory on this one!”

With this win, Ruman (312) now has a 25 point lead over Fix (287), but Ruman still needs some valuable points this weekend at Daytona to ultimately wrap up her first Trans Am Championship. Ruman also received the Coolshirt Systems “Cool Move of the Race” for her final pass for the lead over Cliff Ebben on the last lap of the race.

“We needed this—we needed a points gap again,” said Ruman. “We’ve been struggling since the Mid-Ohio debacle, and this is what we needed to boost our points effort. But it’s not over yet; we’re going to go into Daytona and try our best and make it eight wins in 12 races.”

Ruman heads to Daytona as the defending race winner from last year’s season finale. Last year’s win at Daytona also marked a place in the history books as she became the first woman to claim the overall victory in a professional automobile race at Daytona. Ruman looks to make history once more as she tries to become the first female Trans Am Champion.

“I can’t wait to get back on track at Daytona International Speedway. It’s so awesome to race at such an iconic track,” exclaimed Ruman. “The Championship is not over yet, so I have to run smart and keep my eyes on the prize; as I’ve said all season long, we are in it to win it!”

The team completed an extremely quick turnaround on the car and headed 1,100 miles over to Daytona for the load in on Tuesday. 69 entries are set for the weekend and teams can participate in a promoter's test day on Wednesday, November 11, 2015 and the official Trans Am weekend will start on Thursday November 12th. First practice session will be at 11:00 a.m. ET, then “Fast Five” qualifying for the 16-car TA class will be at 4:30pm, followed by TA2 and TA3. Friday will be the second official practice session at 12:30pm. The Bullet Liner 100, 103.24 mile, 29-lap final race of the 2015 Trans Am Championship will begin at 10:30 a.m. Saturday morning. Visit gotransam.com for ticket, full schedule, and all other weekend information.

Sponsors: McNICHOLS CO. is the nation’s largest distributor of Perforated and Expanded Metals; Wire Mesh; Bar, Plank, and Safety Gratings; Stair Treads; Matting; and more. Products are carried in all styles and materials–stocked for 24 hour shipment. “Inspired to Serve”™ 800.237.3820 mcnichols.com.

Don Sitts Auto Sales, Inc. is a family owned and operated dealership in Cuyahoga Falls, OH. Stop in for all your vehicle needs, over 200 cars in stock – for more info and inventory list, visit DonSitts.com.