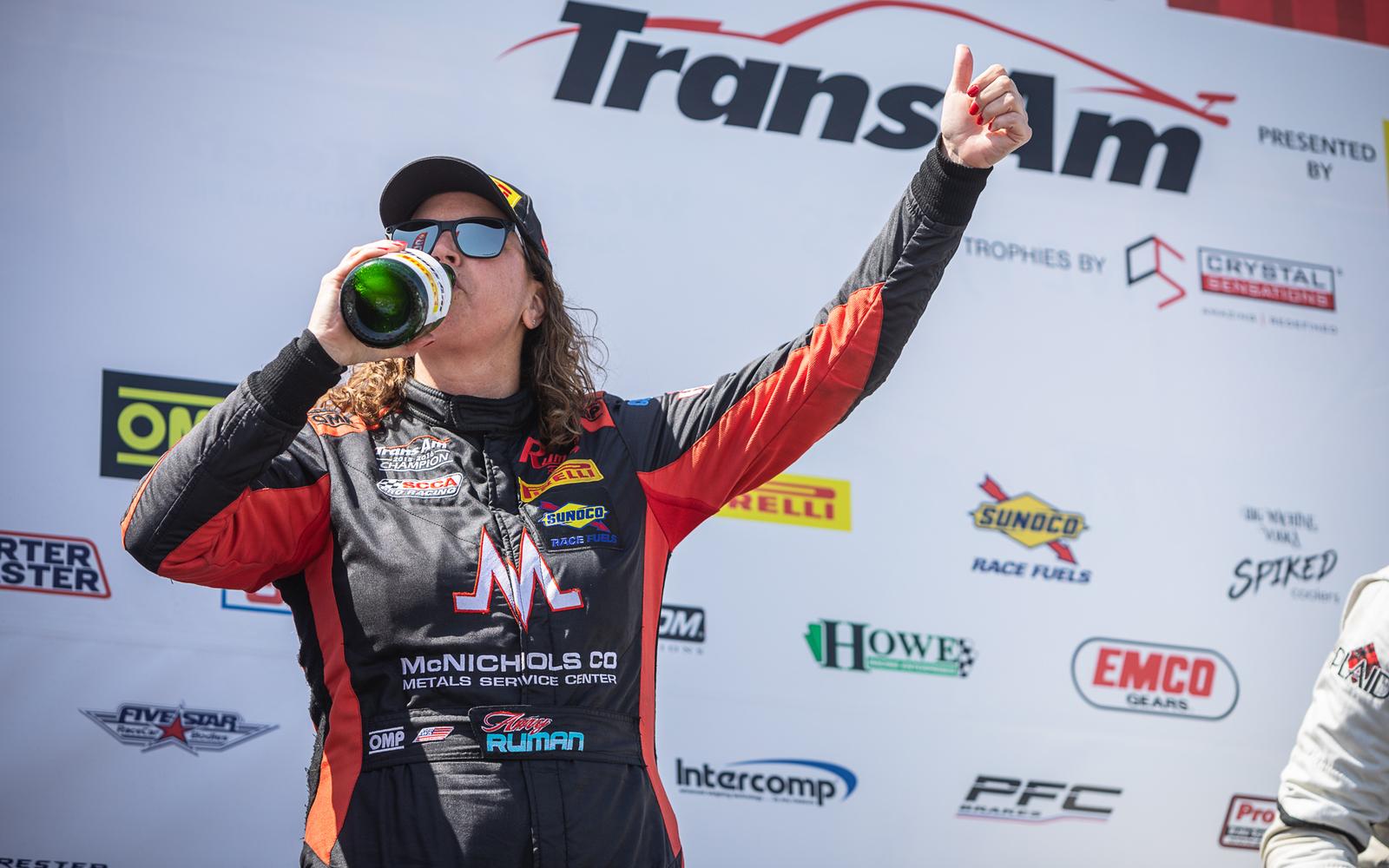 The West Coast swing started last weekend for the National Trans Am Championship Presented by Pirelli competitors at WeatherTech Raceway Laguna Seca, Monterey, CA and after a quick turnaround teams headed directly to Sonoma Raceway, Sonoma, CA, as part of the 2022 SpeedTour running in conjunction with the Sportscar Vintage Racing Association (SVRA).

After qualifying in sixth place for last Saturday’s Laguna Seca race, Ruman had a great start and gained several positions ultimately running in third place. In a heated battle, Ruman recovered from getting spun on lap 10 from rear contact with Thwaits heading into turn one. Later in the race contact from Masaood, allowed Masaood and Thwaits to pass, which dropped her back to fifth. A late race restart helped close the gap and saw more racing contact between Thwaits and Masaood sending Thwaits into a gravel trap. Dyson, Masaood, and Ruman crossed the finish line in first, second, and third. A post-race penalty assessment was handed to Masaood, moving Ruman and Drissi up to second and third places respectively.

“That was one wild race!” exclaimed Ruman. “We had some great racing for the podium. It was one of those races where anything could happen and it did, all the way till the end and even after the race was over. I’m so thrilled for the No. 23 McNichols crew, they work so hard, and I can’t thank them enough for all their efforts. They turned the car around quickly for Sonoma so hopefully we can continue to run and finish up front this weekend.”

Ruman has only raced at Sonoma once in her career, twenty-three years ago in the Women’s Global GT Series (WGGT) in 1999 when the infamous track was known as Sears Point Raceway. Trans Am will run the full-length road course at Sonoma Raceway, a 2.520 mi circuit featuring 12-turns on a hilly course with 160 feet of total elevation change.

“I can’t believe it’s been twenty-three years since I’ve been here! We will have a lot of catching up to do as many of the other drivers have raced here more often than us. Optimistically we will have the No. 23 McNichols Co. Chevrolet Corvette up to speed in no time,” commented Ruman.

Fifty-eight competitors are entered across all classes, with six running in Ruman’s TA class. Testing, practices, qualifying, and races will take place Thursday through Sunday. The Trans Am TA/XGT/SGT/GT feature race will be Saturday, April 30th at 1:05pm, and the TA2® race will be Sunday at 1:40pm, both races are 40-laps (100.8-mi) – all times listed are PT. Please visit www.sonomaraceway.com/, visit gotransam.com, speedtour.net, svra.com for tickets, schedules, and all other weekend information.

Heading into Round 5, Chris Dyson leads the TA National class championship with 125 points, followed by Tomy Drissi in second – 106, Amy Ruman in third – 97, and Ken Thwaits in fourth – with 90 points.

LIVE STREAMING AND CBS TV COVERAGE OF THE TRANS AM SEASON:

The entire lineup of 2022 SpeedTour will LIVE stream for FREE! Fans can watch from anywhere on a variety of social media platforms including the new SpeedTour.TV, the Trans Am Facebook page, and YouTube channels SpeedTourTV and the Trans Am Series.