Ragginger turned a fast lap of 1:19.557-seconds in the No. 17 Gin Amade Chevrolet Camaro fielded by Claudio Burtin. Chris Dyson briefly held the pole with a last-lap flyer of 1:19.969-seconds in the No. 20 Plaid Ford Mustang, but Ragginger regained the top spot moments later as the sun began to set at the circuit.

It was the second-career Trans Am pole for Ragginger, who was fastest in his most recent Trans Am start, in 2017 at Road America.
"The session went fast with the situation that happened in the beginning,” Ragginger said. “I hit traffic and only had one chance on the last lap to get a flyer in. The team did an amazing job on the car. Everything was working great, I just had to bring it. Tomorrow we have 40 laps, we have a good car for the distance. I am excited to go at it Trans Am style." 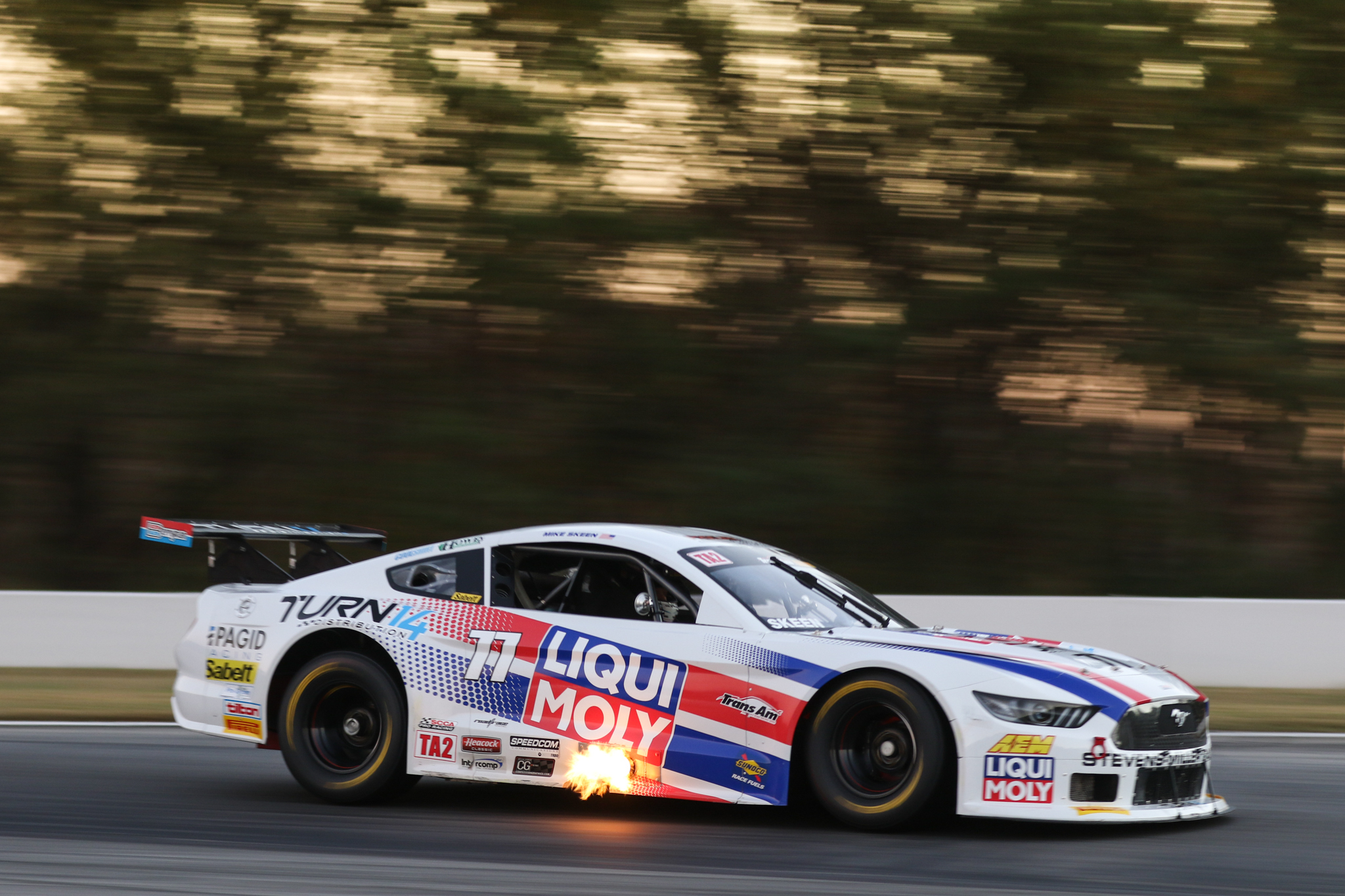 Dyson was confident in his outside pole start. The 2019 Trans Am Vice Champion won from the same position in 2018 at Road Atlanta.

"I was really glad we got the session in," Dyson said. “It was looking a bit iffy there as we were losing daylight and the track was oiled down. The track workers got the oil cleaned up as best as they could and it was good to get at least a bit of a shootout out there. My starting position is ok for tomorrow. We won from there before. It's my first time racing against Martin. There's a lot of depth in the front end of the field this weekend, it will be a good race."

The session was black-flagged for 35 minutes due to oil in Turn 10 from championship leader Ernie Francis Jr., who suffered a mechanical failure on board the No. 98 ZF Custom Concepts Ford Mustang. Francis Jr. enters the weekend with a 43-point lead over Tomy Drissi. The 22-year-old South Floridian is seeking his fourth-consecutive TA class title – and seventh Trans Am championship in his seven-year career.

"I don't really know what happened today,” Francis Jr. said. “Right on the out lap, the car just blew a hole through the side of the motor in Turn 10. I can't really explain it. I guess that's just on par with 2020. We have a new motor going in for tomorrow. We are starting from the back, we are going to just cruise around, work on points and focus on locking up the championship."

Boris Said, seeking his third pole in as many 2020 starts, qualified third at 1:20.285-second in the Weaver Racing Techniques/SRI Performance Dodge Challenger. He will be joined on the second row by Drissi, 1:21.336-seconds in Burtin’s No. 8 Lucas Oil Camaro. Justin Marks and Amy Ruman will share the third row.

The Trans Am 100-mile feature will open the day before the TA2® powered by AEM race takes to the track at 4 pm ET. (Full Results)
Mike Skeen gained another three points in his bid for the TA2® championship, winning pole with a lap of 1:23.507-seconds in the No. 677 Liqui Moly/Turn 14 Distribution Chevrolet Camaro. 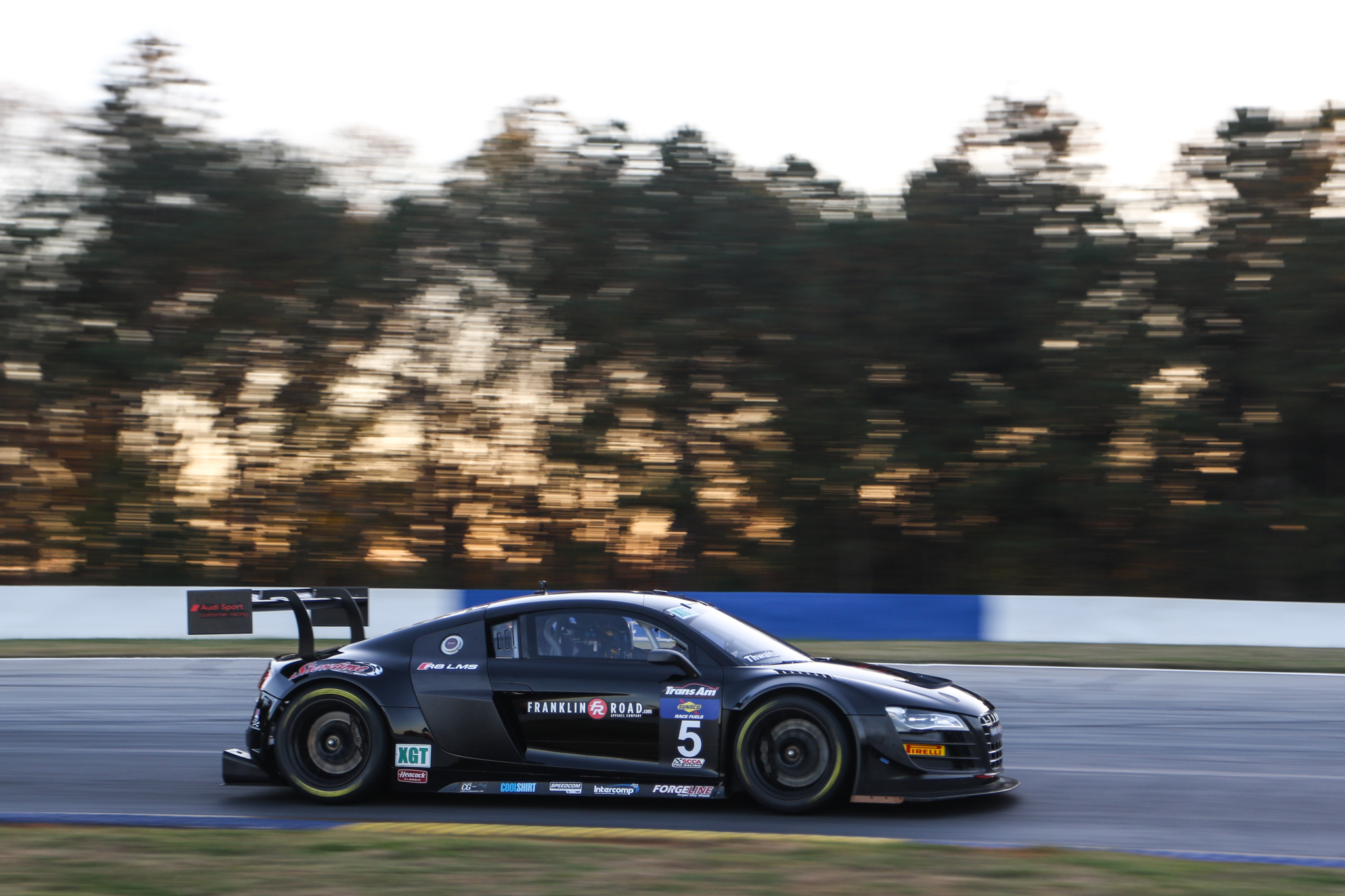 "The colder temperatures were great actually, it provided some great horsepower for us," said Skeen, capturing his fifth pole of the season. "The lighting wasn't too bad, I was just more concerned about the traffic. We had to get out there and get a pretty quick out lap and we started catching the back of the pack. That hurt a bit, fortunately, not enough to cause an extreme issue. I am happy to get through that session with no drama and kept the car clean. This puts us in the best position to keep the race clean tomorrow and sail off with the championship."

Businessman/racer Franklin Futrelle made his Trans Am debut with a third-best lap of 1:24.424-seconds in the No. 58 B2 Motorsports Ford Mustang. The 2009 Formula Mazda National Champion, Futrelle is a veteran of open-wheel competition when his schedule permits.

Cameron Lawrence was fourth, with a quick time of 1:24.592-seconds in the No. 8 3-Dimensional Services Group Mustang, followed by Edward Sevadjian (1:25.011-seconds) in the No. 38 Big Machine Vodka/Duntov Motors Camaro.

Ray Evernham qualified 22nd for his Trans Am debut in the No. 26 Mike Cope Racing Cars Mustang, running 1:30.162-seconds. A former modified stock car racer, Evernham was inducted into the NASCAR Hall of Fame for his work as crew chief for Jeff Gordon’s Rainbow Warriors, and car owner for drivers including Bill Elliott. 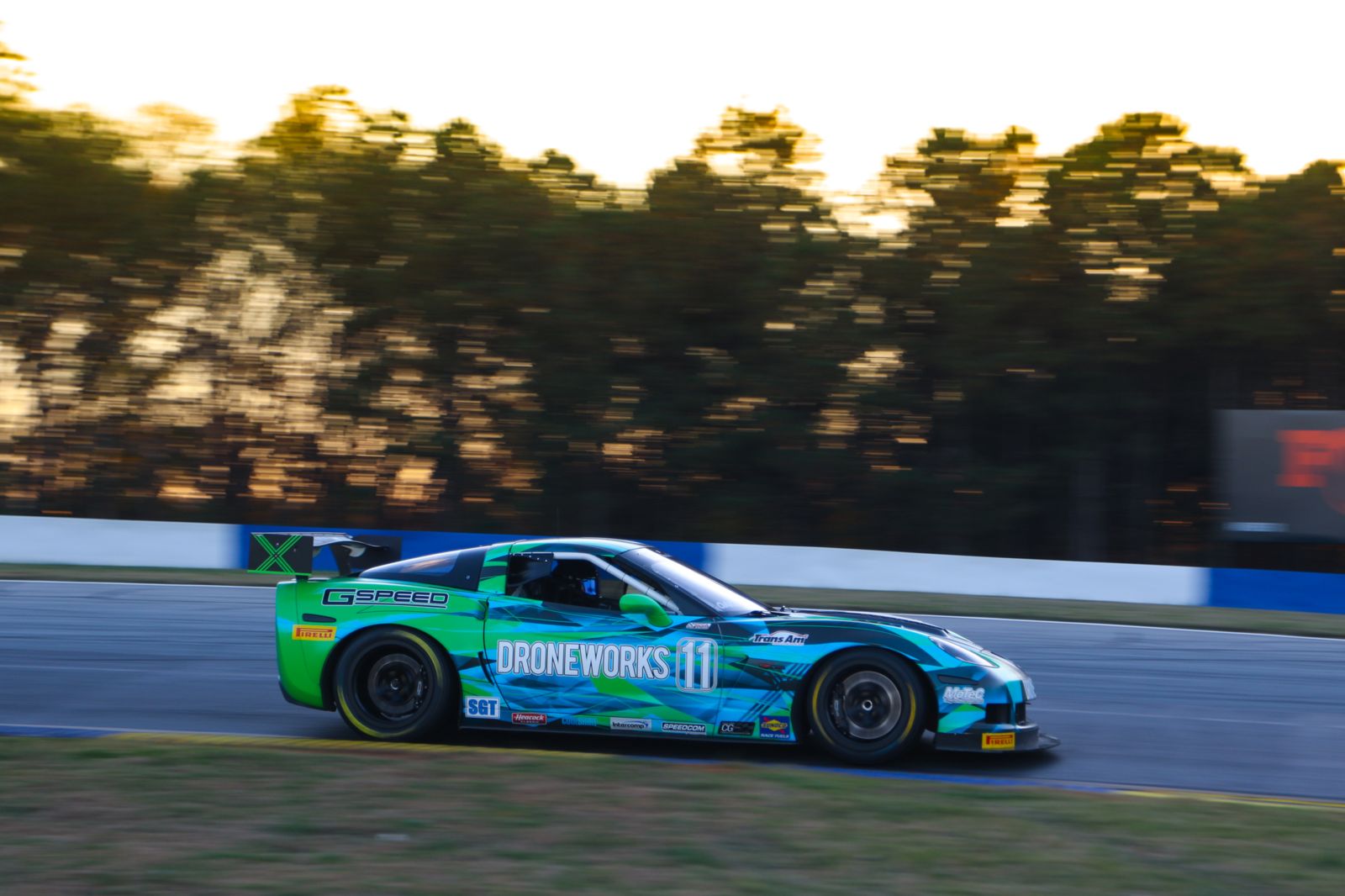 Ken Thwaits led the XGT class, running 1:25.898-seconds to claim his fourth pole of the year in the No. 5 Franklin Road Apparel Audi R8 GT3 Ultra. The bonus points were enough to clinch the class championship, provisionally.

Justin Oakes finished strong to beat out the SGT title contenders with a last-lap run of 1:27.032-seconds in the No. 11 Droneworks Corvette. Oakes finished third in the recent race at Circuit of The Americas in his Trans Am debut.

"The oil and visibility really didn't affect our performance today, it was sitting and waiting on the grid the extra half hour,” Oakes said. “We had to go from being sedentary to performing immediately, but we pulled it together. The car feels great. The track conditions cooled off quite a bit after the sun went down over the hill. All together today was a success. Tomorrow I am looking forward to racing with all the SGT guys. We all qualified pretty close together. I want to mix it up with the SGT class and just getting in some good, close racing with some talented drivers."

Of the SGT championship leaders, Lee Saunders ran 1:27.201-seconds in the No. 84 Landsearch LLC Dodge Viper, followed by Adrian Wlostowski, 1:27.235-seconds in the No. 97 F.A.S.T. Auto Ford Mustang. With the qualifying bonus points, Saunders enters the race with a six-point lead. 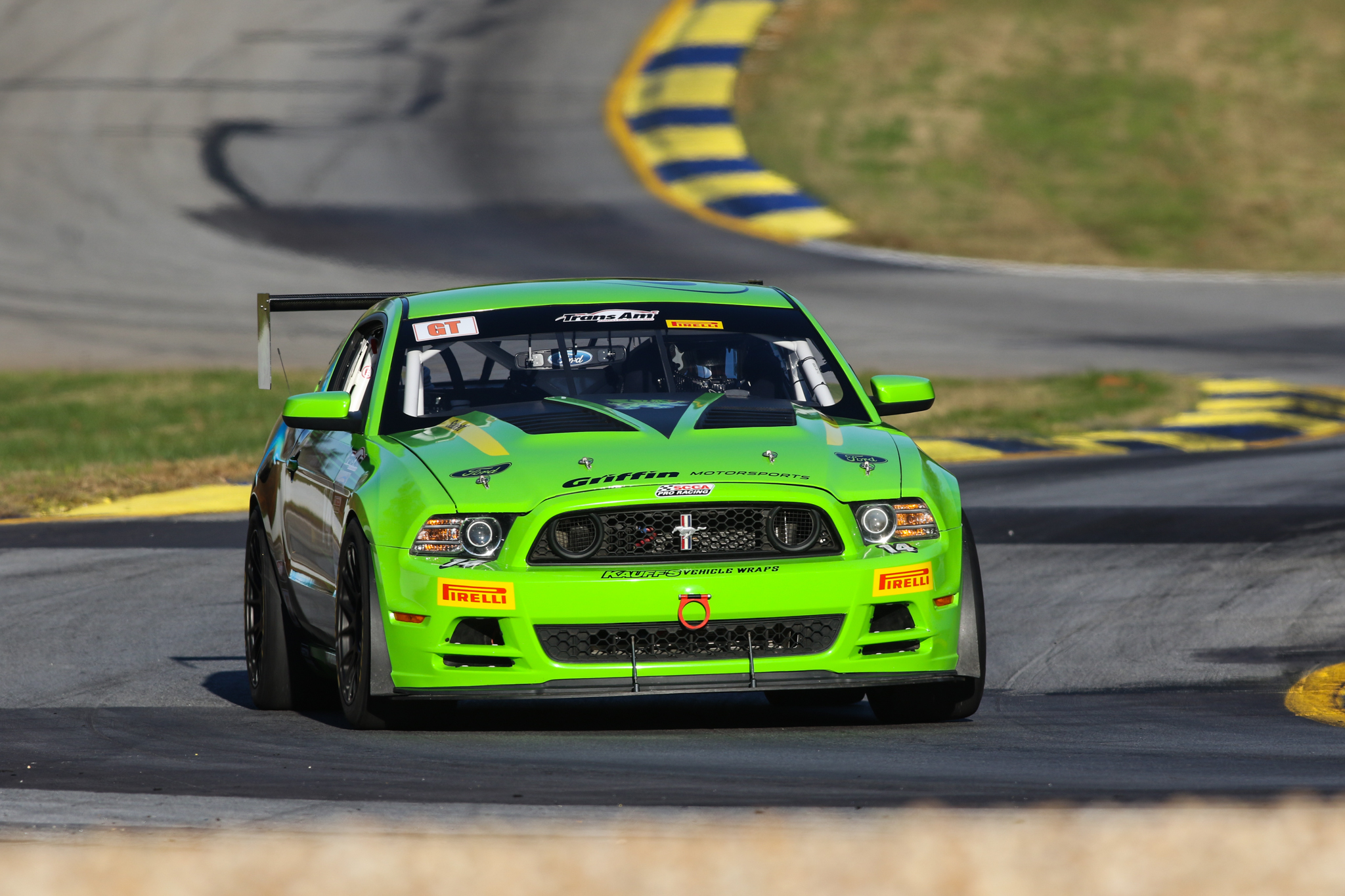 Billy Griffin scored his second-consecutive pole in GT, 1:35.017-seconds in the No, 14 Griffin Auto Care /Sheehan’s Towing Ford Mustang. With point-leader Tim Horrell missing the event, Griffin now trails by 15 points and can take the championship lead by completing half of Saturday’s race. However, he revealed that his Mustang has a broken part in its rear end which necessitated a long night for the crew for repairs.

"I was pretty confident that the track was going to be pretty good,” Griffin said. “We had a spotter watching the oil clean up, and he said the workers were doing a fantastic job. The oil didn't hang me up as much as the cold weather. I am not used to racing in the cold. It took an extra lap for my tires to come in, so I couldn't lay down the way I wanted to, one-two and done. We had to do one extra lap but it worked out the way we wanted. We have a broken part in the rear end so we are a little worried. We have the part coming in and we will be spending the night trying to fix it before the race tomorrow. We want to win, that's what we came here to do. If we finish, we can win the points championship, but we want to win the race too."

Saturday begins with the TA/XGT/SGT/GT race at 10:45 a.m. Eastern followed by the TA2® powered by AEM feature at 3:55 p.m. Eastern. The combined five-class finale will take the green on Sunday at noon Eastern. The grid for the finale will be set by fastest race laps on Saturday.

The Atlanta SpeedTour is open to fans. Tickets are available at: SpeedTour.net.

All three races will be live streamed (starting Saturday) on the Trans Am by Pirelli Racing App. Download here: https://nagrasports.app.link/lIQjdAuxq7