SONOMA, CALIFORNIA (11 OCTOBER 2020) – After a rain-soaked Saturday, the Trans Am Series presented by Pirelli West Coast Championship closed out its inaugural double-header weekend at Sonoma Raceway with perfect California weather on Sunday.

Following an overall second-place finish in Saturday’s Trans Am race, Greg Pickett reclaimed the overall first-place position with a dominant showing in the No. 6 Picket Racing Ford Mustang on Sunday. 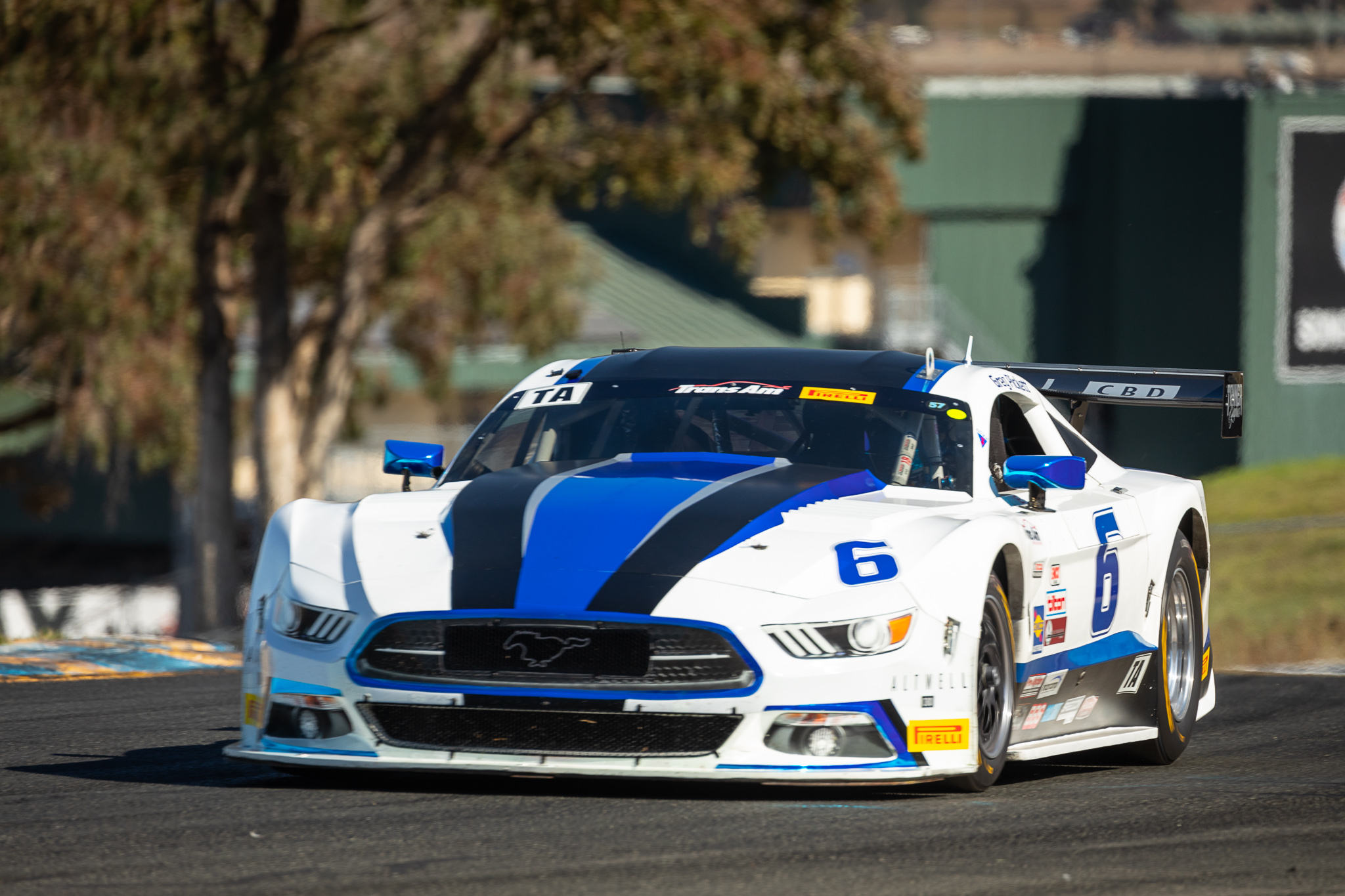 Starting from pole, Pickett remained cool under two restarts to cross the stripe 24.486-seconds ahead of second-place overall finisher Thomas Merrill for his third overall win of season. The win kept Pickett perfect for the season with four Trans Am class victories.

“We tried to put on a good show, have a lot of fun and that’s what it’s all about for me,” said Pickett. “The track was pretty oily today, I was a bit worried about that. As I got going it going it was a bit slippery and I went off my rear bar just to hook it up a bit better. That worked nicely and created a nice balance to the car for the rest of the race. We are so lucky to have a facility like Sonoma in our backyard.”

The second installment of the double header stopped soon after it started following an incident involving Mitch Marvosh in Turn 6 brought that out the full course caution. Oil was spotted around the circuit in Turns 7 and 8, bringing the full field into the pits after the full course yellow switch to a black flag.

The clean up ate significant time off the clock and the mixed-class field returned to racing with 43-minutes remaining in the session.

The Trans Am class of Pickett and Michelle Nagai quickly padded a gap between the TA2® powered by AEM cars and the SuperGT classes. Nagai kept Pickett within striking distance until an incident with lapped traffic shunted her No. 72 NagaiRacing/BerkeleyJetDriveInc. Chevrolet Corvette off course in Turn 2. Nagai was unscathed in the incident, but the incident forced her Corvette to retire early from the 75-mile feature.

With 10 minutes remaining, Pickett continued to put on a clinic around the 2.385-mile, 12-turn road course, building more than a 24 second lead on Merrill in that short time.

Pole sitter Merrill, who was Saturday’s overall race winner, lead the TA2® class from flag to flag. Sweeping his first weekend on the West Coast, Merrill received the ultimate invitation from his on-track competitor, Pickett.

“Thomas (Merrill) is the real deal,” Pickett said following the race. “I am not going to be around forever, and I invited this young man to come test the No. 6 car here to see how fast he can really go.” 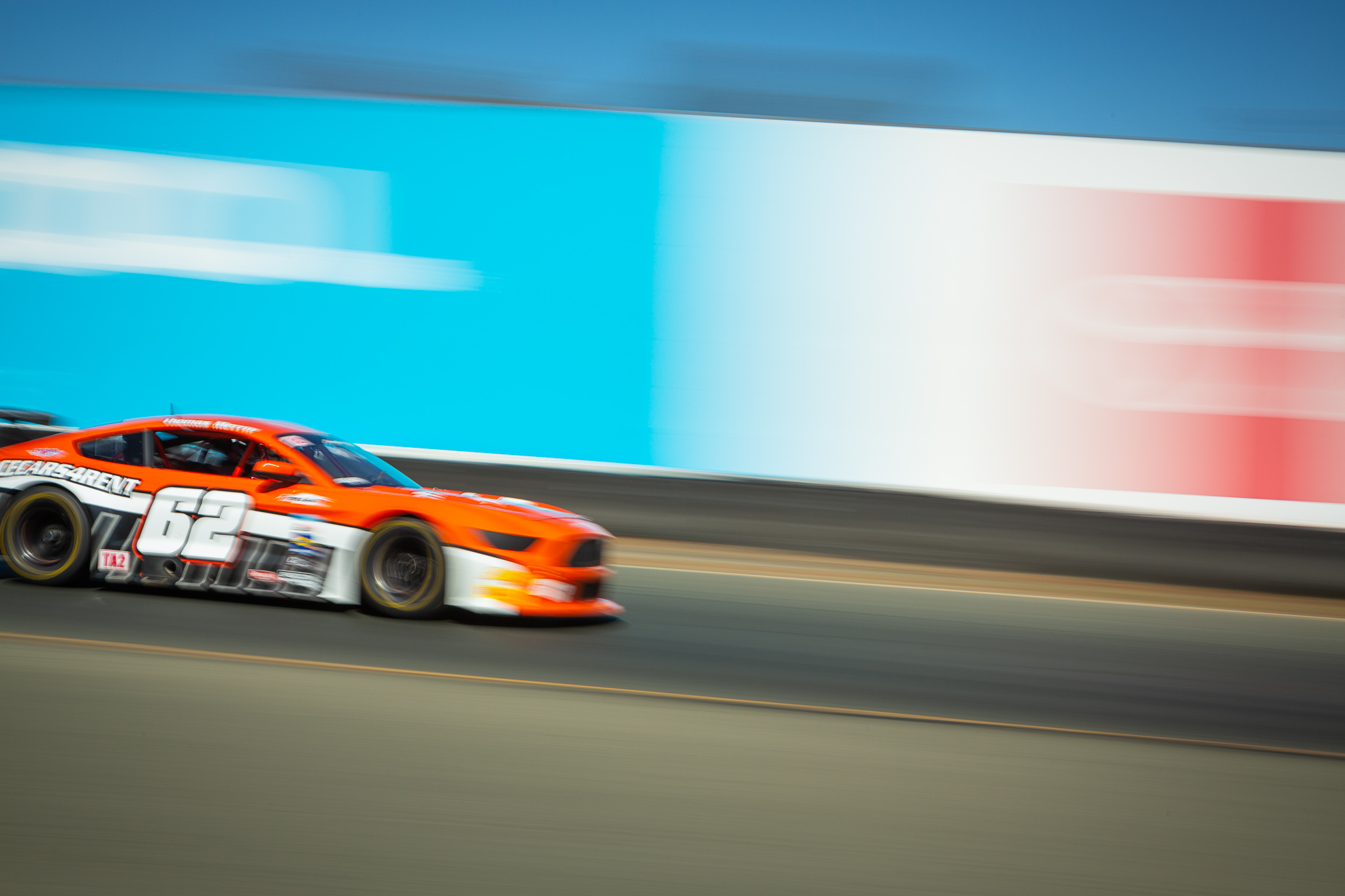 Merrill, who is second in points in the National Trans Am Series in TA2®, finished the race more than six seconds ahead of his closest competitor, Tim Lynn. Merrill was more than ecstatic when approached with Pickett’s offer.

“Greg Pickett is my hero,” Merrill said. “I told him ‘Sign me up!’ when he asked me to test. You don’t say no when a legend asks you to join him on the track for a test.

“We were able to get into a rhythm early today,” Merrill continued. “Greg (Pickett) did a nice job checking out on everybody. With the heat coming in and sun beating down on the race track, today was about not cooking the rear tire too quickly. The track was really slippery and made the restarts tricky. The Nelson Motorsports guys gave me a heck of a car, and it showed.”

Lynn started Race 2 tied for the championship lead with Michele Abbate after a mechanical issue in Race 1 forced Lynn out of the round early. The championship title contender returned on Sunday starting and finishing the race in second in the No. 17 Roof Options/TFB Performance Ford Mustang.

The move into the TA2® points lead, earned Lynn the Cool Shirt Cool Move of the Race.

“We don’t keep track of points, we just focus on one race at a time,” Lynn said of his title chase. “I’d like to think I had something for Thomas (Merrill), but we didn’t today unless we got lucky with a break and he caught some traffic. We don’t have a real goal or objective for the season regarding the championship, we are just out here to have fun together, go racing and that strategy seems to be working.”

Starting and finishing third was Nick Rosseno in the No. 33 BurrtecWasteIndustries/AMSOIL Chevrolet Camaro. The podium finish was a massive recovery for the Rosseno Racing after an early incident in Race 1 sent the California native back his garage. His team, along with talents from Nagai Racing, worked through the evening hours to insure Rosseno’s start for Sunday’s race. 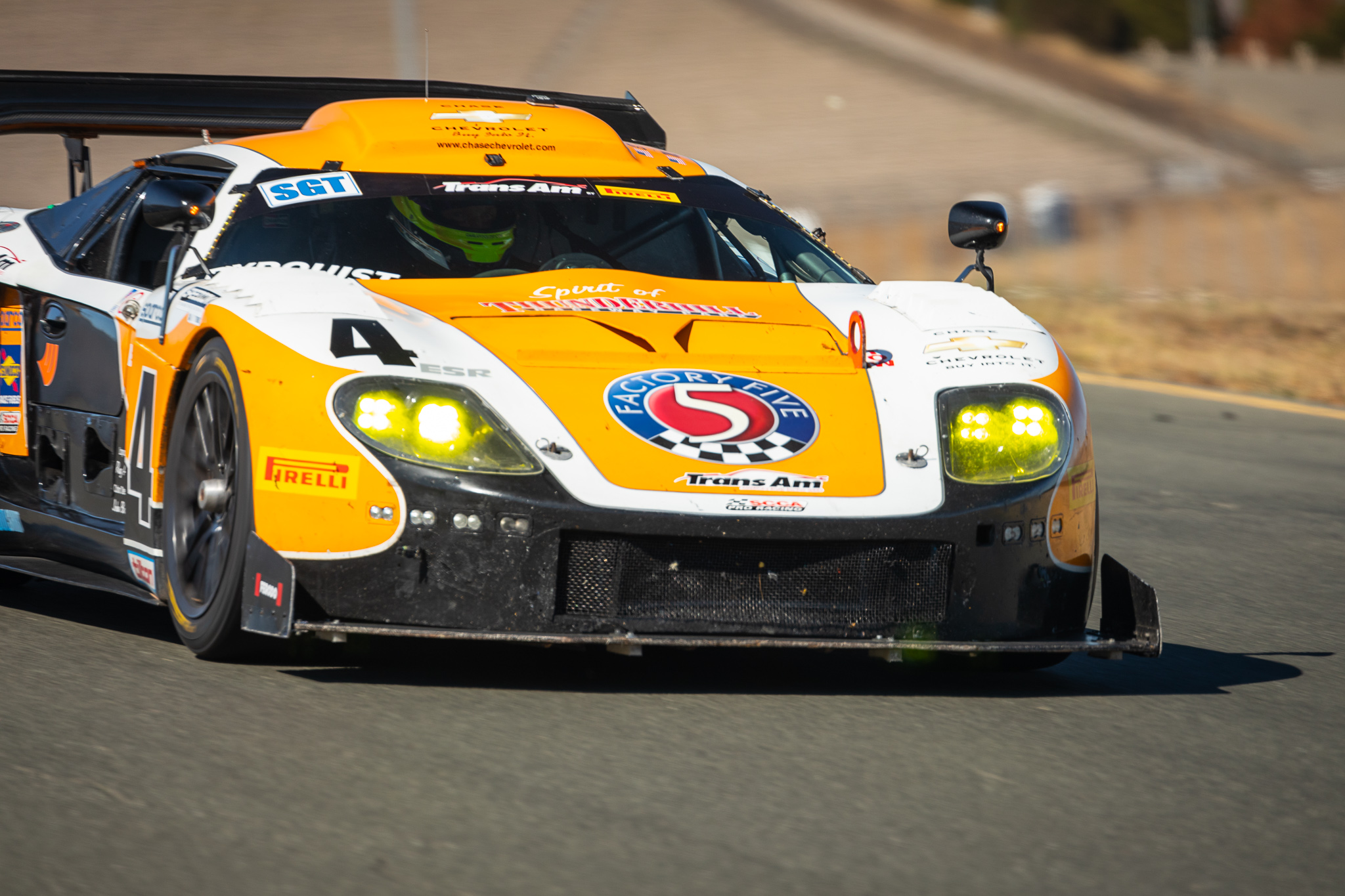 “The best part about today was actually making the race,” explained Rosseno. “We had some problems early on yesterday, and thanks to Nagai Racing for lending us some of their talents to get our call all patched up for today. We are happy to come away with a solid third place finish.”

Carl Rydquist’s victory record remained perfect in the SGT class as he wheeled his No. 4 No. 4 MyRaceShop.com/Tel-Tac/Mendeola Factory Five Racing GTM to his fourth win of the season ahead of second-place SGT finisher John Schweitzer (No. 00 SuperiorBuilders/KidderMatthews Chevrolet Holden).

“The car was amazing, and the balance of the car was super good today,” Rydquist said. “I want to encourage everyone with at GT3 or GT4 car come join the class, it’s super awesome. The races are long, so you get to have some fun for a long time, but they are not so long that you need a big crew. Bring those cool Porches and Ferraris because Trans Am is an awesome series to run and you’ll have a lot of fun doing it.”

The rest of the West Coast season will be streamed live on the Trans Am by Pirelli Racing App: https://nagrasports.app.link/lIQjdAuxq7