BRAINERD, Minn. (18 July 2021) – There was plenty of passing in Sunday’s Trans Am Series presented by Pirelli combined feature race at Brainerd International Raceway.

Future Star Ernie Francis Jr. drove from the back of the grid to take the overall victory in the Ryan Companies US presents the Jed Copham Tribute Weekend, while Rafa Matos rebounded from an incident to capture the TA2® triumph.

Francis started 24th in the No. 98 Future Star Racing Ford Mustang. He quickly moved through traffic, needing only six laps to take third. From that point, he bided his time through a pair of restarts and passed Chris Dyson on the inside on Lap 19 to take the overall and TA lead – earning him the Chill-Out Systems Quantum Cooler Move of the race. (Video: Ernie Francis Jr. Drives from Last to First in Trans Am at Brainerd-Race Recap)

“We really had a dominant car out there today,” said the 23-year-old seven-time champion. “The car was dominant all weekend. The car felt like it was on rails the whole race. We got up to the leaders and worked our way by them. I was able to run a nice, steady pace and pull away from them. Hopefully, we can take the momentum to the next one at Watkins Glen.”

Incredibly, it was Francis’ first victory of the season in seven attempts. That upped his career total to 24 wins in TA – and his 47th including his 23 class triumphs.

“It’s been so tough – we’ve been waiting so long for this win,” Francis said. “We’ve been struggling all year long. We had so many opportunities earlier in the season, but it just didn’t go our way. I’m so happy we could go from the back to win this. It’s been a great weekend so far. I finished off the SRX season last night and got second in the championship.”

Fast qualifier Tomy Drissi led the opening 17 laps in the No. 8 Lucas Oil Chevrolet before being passed on a restart by Dyson and Francis. Drissi held on to take second, 19.219 seconds behind Francis.

"It was a great race," said Drissi. "It was an unusual day, we set up our car to come in sooner. Ernie (Francis Jr). was just the class of the field today. It was a lot of work to gain just two points on (Chris) Dyson."

Dyson passed Drissi to lead a lap before losing the position to Francis. He was running second in the No. 20 ALTWELL CBD Ford Mustang directly behind Francis when he spun off on lap 24, dropping to 15th in the combined field. Dyson then worked his way back to finish third overall, 53.585 seconds behind Francis. 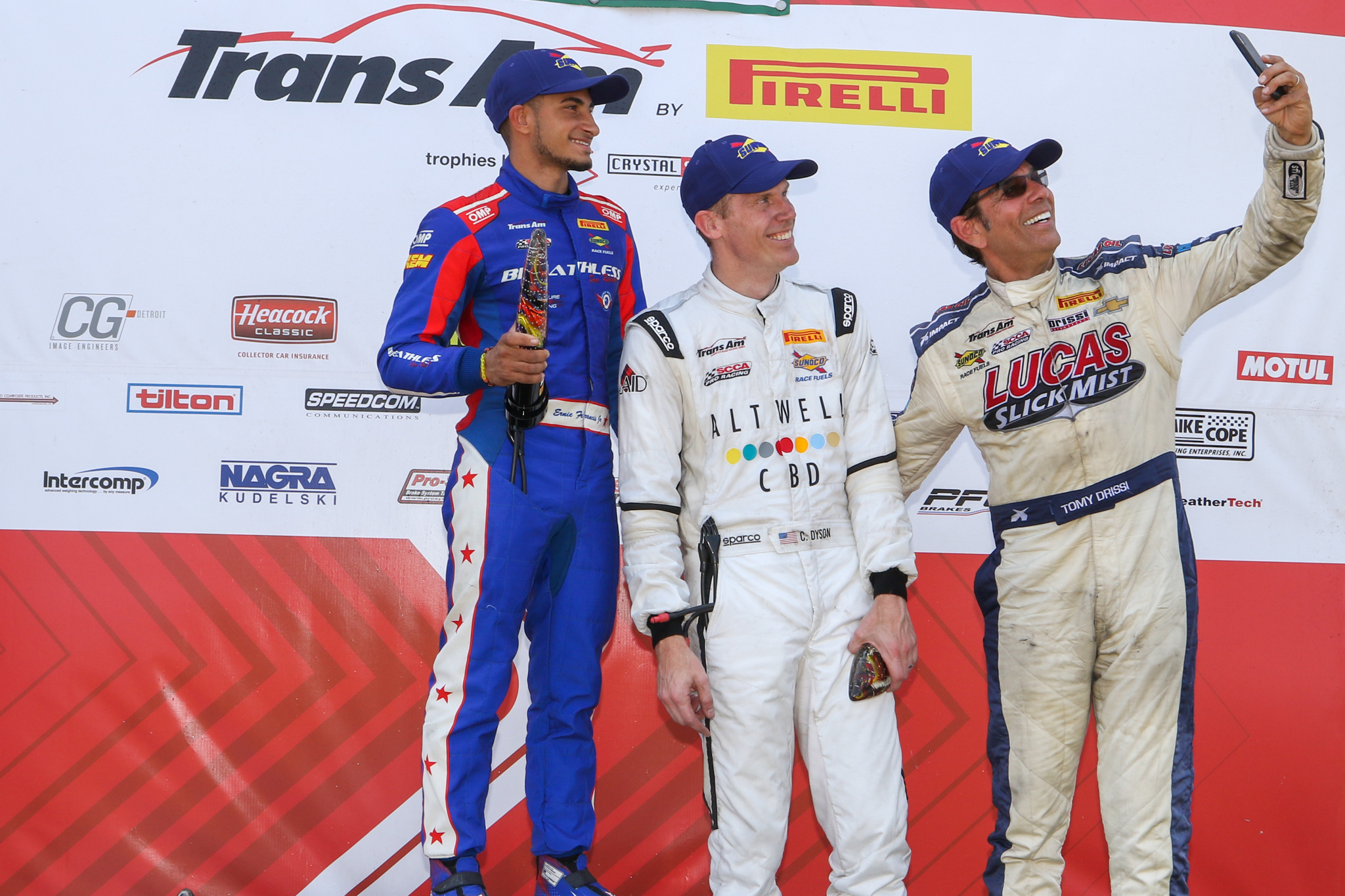 "Ernie (Francis Jr.) had a better car today," said Dyson. "I thought I could have kept Tomy (Drissi) at bay, but I kind of just handed it to him today. We have some problems we need to work on with the car, and hopefully get it right for the upcoming races. But, at the end of the day the responsibility lies with me. We paid the penalty for not racing here last year, so we were just playing catch up all weekend. I am happy to salvage a third-place result and more points toward the championship."

Ken Thwaits started on the pole in the No. 5 Franklin Road Apparel Chevrolet Camaro. He survived a spin to finish sixth overall and fourth in TA. He was the top Masters competitor in the TA category.

Amy Ruman joined Francis at the back of the grid for the start due to missing qualifying after a broken driveshaft in the No. 23 McNichols Company Corvette. Without a replacement (they had the part on back order), Ruman’s weekend was saved when the Copham family stepped up and sold her the driveshaft from former TA competitor Jed Copham’s car. With her weekend saved, she worked her way up to place 10th overall and fifth in TA.

"Today's finish was all about teamwork and perseverance," Ruman said. "I can't thank my team enough for how hard they worked overnight to get us to the start of the race and a full finish today. We had to modify a driveshaft that we received from the Copham family from Jed's old Trans Am car. They were nice enough to let us buy that off them. We cut that down and modified it to fit for this race. It wasn't a perfect fit but we are just happy to take home a solid fifth-place finish in the McNichols No. 23." 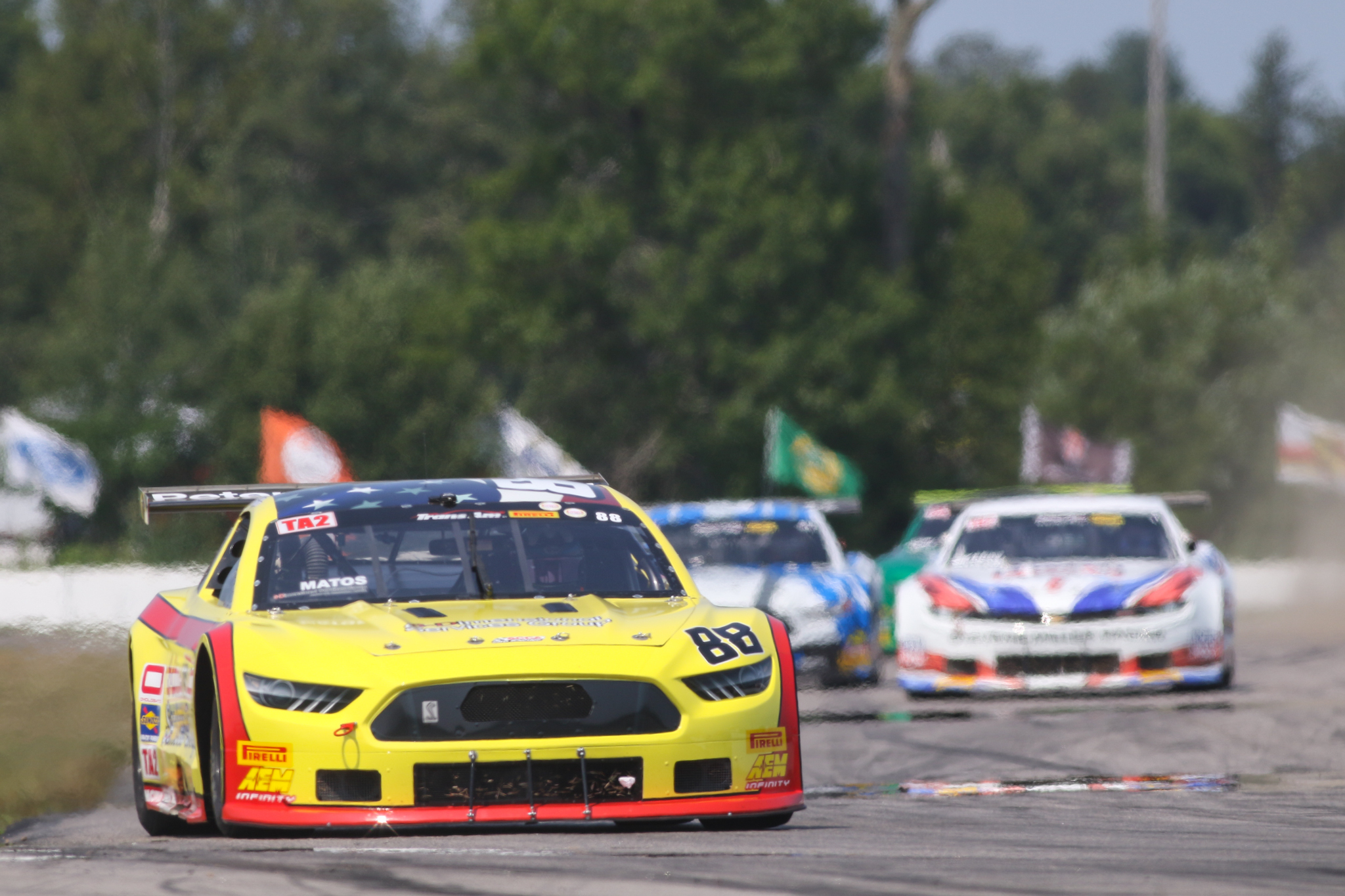 In TA2®, Matos pulled away to lead the early laps in the No. 88 3-Dimensional Services Group Ford Mustang. But while Francis was challenging Dyson for the TA lead, Matos slipped from first to sixth in TA2® after contact from Michael Self on a Lap 18 restart. The Brazilian needed nine laps to come back, passing Thomas Merrill in Turn 6 to regain the class lead – with his pass earning ChillOut honors.

The victory marked Matos’ third of the season – and 13th of his career – while expanding his lead in the TA2® points race. (VIDEO: Matos Unrattled in TA2 Comeback- Race Recap)

“Man, it was a hot one,” Matos said. “I thought we were done for a moment after I got hit from Michael Self – he made a mistake on the restart, missed his braking point and hit my door. That was pretty bad, but luckily the car wasn’t damaged. I thought I had some damage for a lap or two. The car started overheating, but somehow, the temperature started getting lower and it was back to normal. Just an amazing day for us. I had high expectations for this weekend. Again, the 3-Dimensional Services guys did an awesome job. Extending the points lead, this couldn’t be a better weekend for us.”

Mike Skeen was also involved in Matos’ incident with Self, sustaining major right-front bodywork damage. Undeterred, he held on and finished second in the No. 1 Liqui-Moly/Turn 14 Distribution Chevrolet Camaro, 4.512 seconds back.

“I didn’t know the extent of the damage,” said Skeen. “At first, I thought we were going to get away with it when I saw Self move over and make contact [with Matos]. I thought I could sneak through to the left but there was a huge cloud of dirt and I couldn’t see anything. Then I saw Self coming back over and we just collected him. Frustrating for sure, but I don’t think any of us had anything for Rafa today. His car was hauling the mail. There was nothing we could do, but that restart made it interesting. This was about the best we could have done today, I’m glad I was able to bring it home.”

Merrill passed Matos to take the TA2® lead following the contact on the restart. He managed to lead nine laps before encountering brake problems on the No. 81 HP Tuners/Mike Cope Race Cars Ford Mustang that eventually put him out of the race.

Tyler Kicera completed the TA2® podium in the No. 75 Silver Hare Racing Chevrolet Camaro, followed by Connor Mosack in the No. 28 NicTailor/IFS M1-SLR Camaro and Adrian Wlostowski in the No. 3 Hawk Performance/F.A.S.T. Auto Camaro. 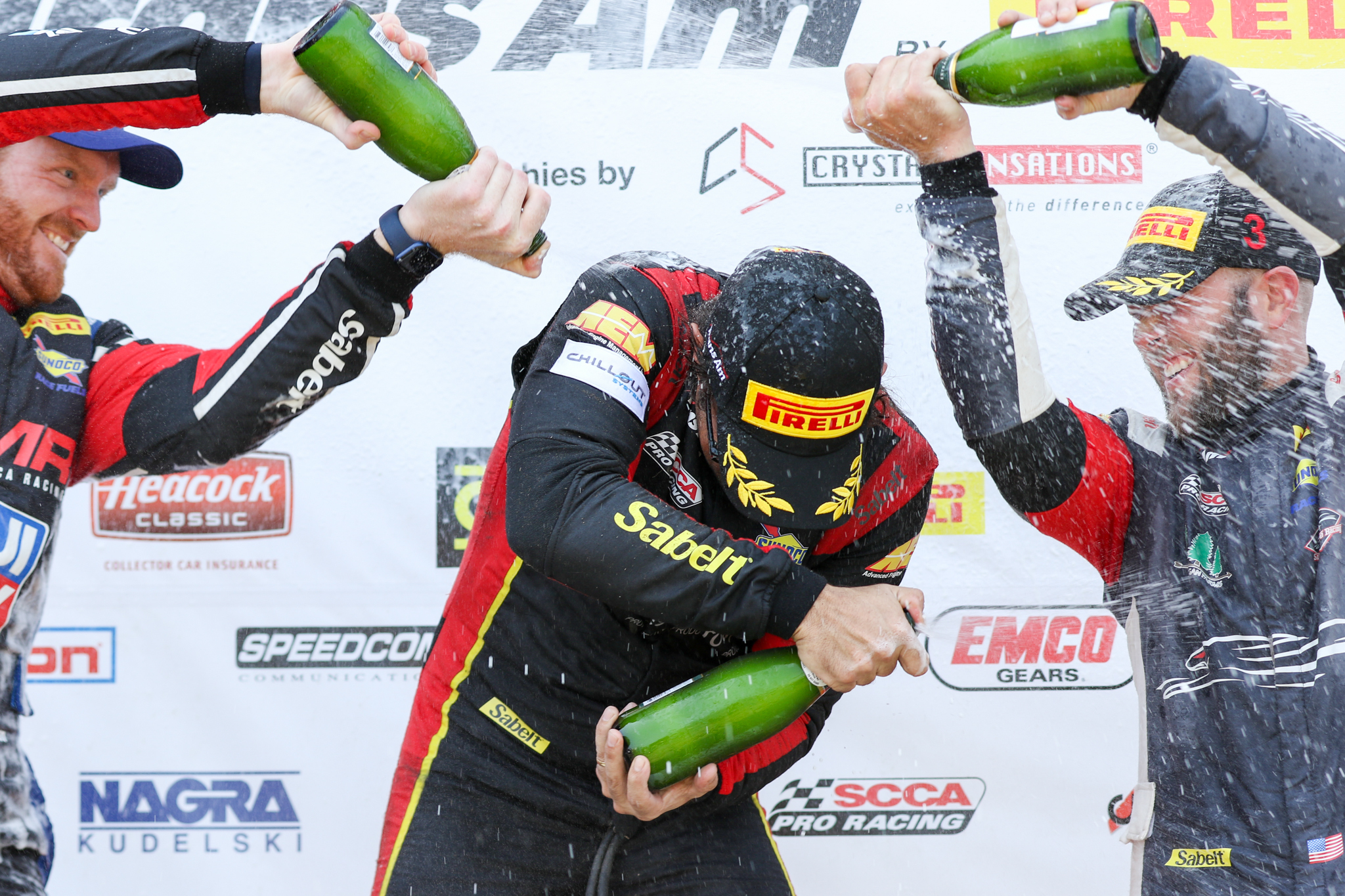 "These races are all about staying on track and being there at the end, and that held true for us today," said Kicera. "I picked my way through the field, and was able to get a gap. I started to fall off there at the end so it was all about maintaining. Huge thank you to Maurice and Laura Hull for the opportunity."

Next up for the Trans Am is the Music City Grand Prix, featuring the TA2® class, joining the IndyCar Series in Nashville, Tenn., on August 6-8.

The next race for the combined TA/TA2/XGT/SGT and GT classes will be a doubleheader weekend at Watkins Glen International on Sept. 11-12.

The Trans Am Series presented by Pirelli West Coast Championship will travel to Portland International Raceway next weekend (July 23-25) with the Portland SpeedTour.

Watch the full race replay on the Trans Am by Pirelli Racing App: https://bit.ly/34qQfCG