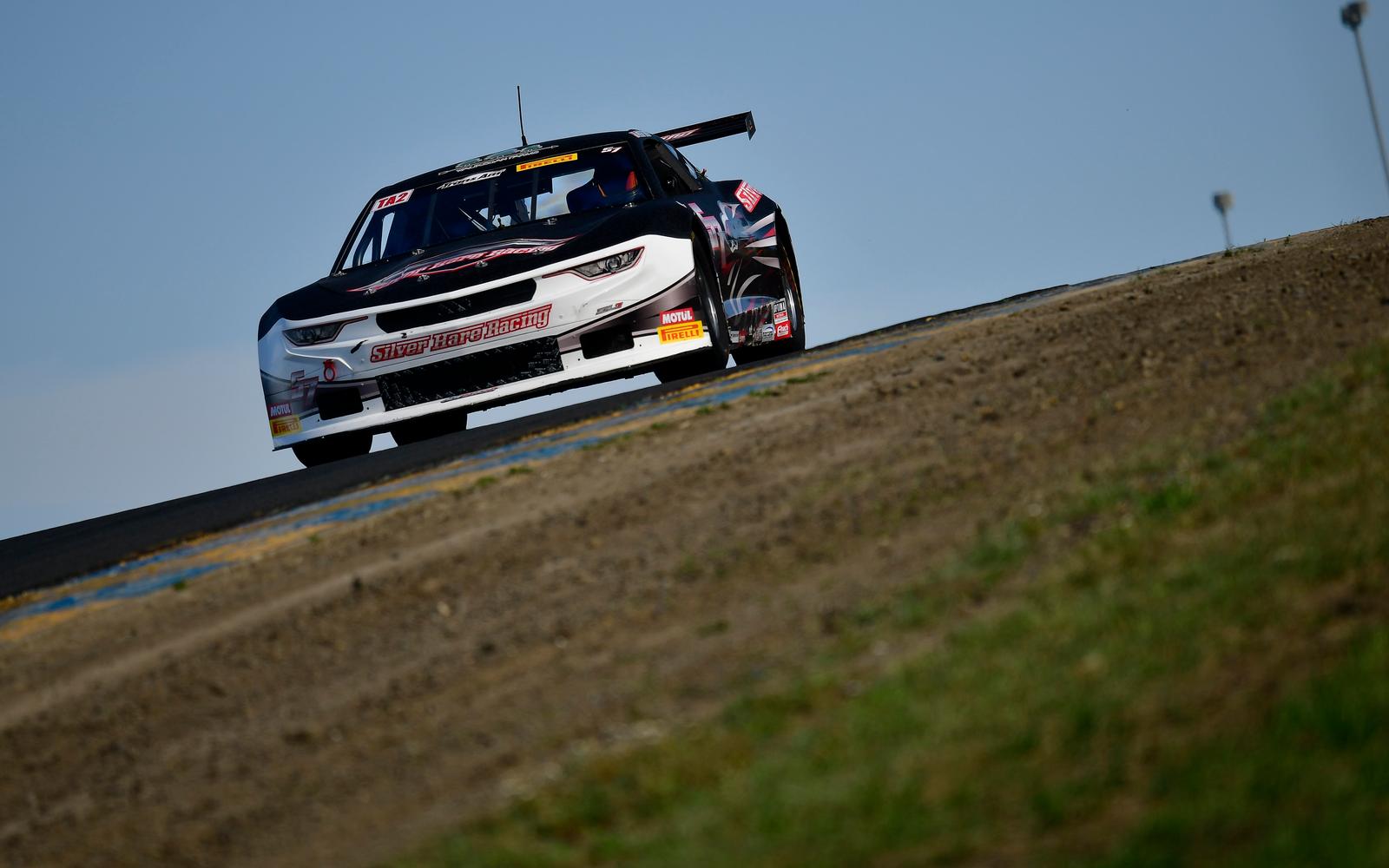 Since 1972, sportscar racing on Memorial Day weekend in the quaint, New England setting of Lime Rock Park in Lakeville, Connecticut, has occupied a humble but rightful place on the motorsports calendar alongside three of the world’s most iconic events – the Indianapolis 500, NASCAR’s Coca-Cola 600 at Charlotte (N.C.) Motor Speedway, and Formula One’s Grand Prix of Monaco.

This weekend, the Trans Am Series presented by Pirelli kicks off the sixth decade of Lime Rock’s holiday weekend tradition with the annual Memorial Day Classic on its 1.478-mile, seven-turn hillside road course, which has seen the likes of legendary drivers Mario Andretti, Dan Gurney, Carroll Shelby and Brian Redman navigate its challenging confines since first opening for business in 1957.

Among the 34 car-and-driver combinations to watch in Saturday’s scheduled 68-lap TA2-class race – Round 6 of 12 on the 2022 schedule – are Silver Hare Racing teammates Connor Zilisch and Maurice Hull. The 15-year-old Zilisch will be making his seventh career Trans Am start and first at Lime Rock in his No. 5 Silver Hare Racing/KHI Management Chevrolet Camaro, while team co-owner Maurice Hull will be looking to better his 13th-place finish at Lime Rock a year ago this weekend in his No. 57 Waukegan Farms/Silver Hare Racing Chevrolet Camaro.

Zilisch, the young driving phenom from Mooresville, North Carolina, who is wrapping up his sophomore year of high school in early June, is coming off back-to-back fifth-place finishes on back-to-back weekends on the West Coast – April 24 at WeatherTech Raceway Laguna Seca near Monterey, California, and May 1 at Sonoma (Calif.) Raceway. As was the case at Laguna Seca and Sonoma, as well as Round 2 on the Charlotte Motor Speedway Roval on March 20, Zilisch will be seeing the Lime Rock layout in-person for the first time this weekend. But he’s proven time and again to be quite the quick study when it comes to turning competitive laps during his first outing on a racetrack. He’s shown that ability since his very first Trans Am race weekend last October at Virginia International Raceway (VIR) in Alton, where he became the youngest pole-winner in series history with a lap of 1:48.905. At Charlotte in March, Zilisch laid down the fastest practice and qualifying laps, as well as the fastest lap of the race.

While the Trans Am Series has been off the past three weekends, Zilisch remained his usual busy self, competing on dirt for the first time in a Weekly Summer Series Sprint car event with the likes of NASCAR stars Kyle Larson and Christopher Bell on the eighth-mile Millbridge Speedway oval in Salisbury, North Carolina. The regular competitor in the Idemitsu Mazda MX-5 Cup took part in Rounds 5 and 6 of that series two weekends ago at the Mid-Ohio Sports Car Course in Lexington. And last weekend, after a day-long Silver Hare Racing test session on the 2.3-mile road course at Carolina Motorsports Park in Kershaw, South Carolina, he was called upon to play the role of public address announcer during a major go-karting event at New Castle (Ind.) Motorsports Park.

Hull, the three-time Trans Am TA2 masters champion, returns to the cockpit for the third time this season and first since Round 3 at Michelin Raceway Road Atlanta on March 27, when he finished 14th overall and tops in the masters class. This weekend marks his second career Lime Rock start.

Silver Hare Racing leverages its Trans Am effort to promote its arrive-and-drive program, where aspiring racers and even tenured professionals hone their road-racing skills on some of the most revered tracks in North America. NASCAR Cup Series drivers Bell, Daniel Suárez, William Byron and Harrison Burton and, at the most recent TA2 rounds at Laguna Seca and Sonoma, NASCAR Camping World Truck Series regular Lawless Alan, have all wheeled Silver Hare Racing-prepared cars to burnish their road-racing abilities. In addition to top-flight equipment, Silver Hare Racing offers professional driver coaching.

The team offers six, professionally built and maintained TA2 chassis from Howe Racing for both competition and private testing. Silver Hare Racing has a dedicated, fulltime crew and operates out of a state-of-the-art facility in High Point, North Carolina. At the track, two 53-foot Featherlite transporters serve as the team’s base, each outfitted with a lounge and smart TVs for data and video review, as well as for hospitality.

“With NASCAR having so many more road-course races, it’s our goal for Silver Hare Racing to be the preferred team for drivers to get that road-course experience,” said Laura Hull, team manager, Silver Hare Racing. “We want to be that important step in the ladder for the young, up-and-coming drivers like Connor, which we’re doing in collaboration with Kevin Harvick Incorporated.

“It started when they brought him to us for testing at VIR a year ago, and now we’re delighted to have him under contract. That’s how we’re trying to position this. We want people to know we have an arrive-and-drive program, where people who want to run this track or another, we provide the opportunity for them to do that and be successful.”

Connor Zilisch, driver, No. 5 Silver Hare Racing/KHI Management Chevrolet Camaro:
“Well, the most important thing since we raced out in California relative to this weekend at Lime Rock was that we tested the TA2 car at Kershaw, which went really well. We found a few things with the car that we will be able to use moving forward. Otherwise, I’ve been busy coaching, and I even did some announcing at a go-kart race in Indiana last weekend. I did an MX-5 race at Mid-Ohio (May 14-15), but that didn’t really go too well. We lost brakes, which led to the frame getting bent, and we kind of had to push through it all weekend long and I just had no speed. So that wasn’t the best weekend. I did some dirt racing at Millbridge between all that, too, trying a few different things just to keep myself sharp, and I’m ready to get back into the TA2 car at Lime Rock this weekend.

“The dirt race was through our Chevy deal. They have two cars that they kind of let a bunch of the Chevy drivers use and it was my turn, so I went out there and did it. They kind of push us to try new stuff, try to get comfortable being uncomfortable, and I was definitely uncomfortable. It was different, for sure. It was backwards to anything I had ever done, but that made it fun. It definitely teaches you a lot – how to use the throttle to help the car. I think it definitely can help as a tool moving forward, I think just car control, really, just keeping the car underneath you. I think that’d be the main thing I took away from it. I was pretty quick, but I just kind of felt lost once I got into a race on where to go and what to do. But I think if I do it again, I’ll be a lot better than I was the first time.

“I’m looking forward to Lime Rock. It should be a good race for us. I haven’t enjoyed the track in real life, yet, but I’ve done it on the sim a bunch, so I think it’ll be good for me. It’s just a bunch of right-handers and one left-hander. But it looks really cool, a lot of elevation. It seems like a different track to what we usually run. I like different, so I’m looking forward to getting out there and seeing what it looks like in real life. I think it’ll be a little bit tricky to pass. Really, you can only pass on the front straightaway. The racing might be a little more difficult, but we’ll have to wait and see until we get there.

“There’s rain in the forecast both days, and I really like racing in the rain. I’ve done it a bunch and I’ve always been good at it, whether it was in a Mazda or in a go-kart, so I’d be really happy if it rained. I haven’t driven one of these cars in the rain, yet, so it would be good for me to learn. I’m sure most of those guys who run at the front, like Rafa (Matos, defending TA2 champion), they all have done it in the rain, so it’d be something new for me again.”

Maurice Hull, owner/driver, No. 57 Waukegan Farms/Silver Hare Racing Chevrolet Camaro:
“I really like Lime Rock. I think it’s a really cool little track. It’s mostly right-hand corners with a couple of hills where you can jump off the ground. There’s a good bit of rain in the forecast, which will make things interesting again. Personally, I don’t mind driving in the rain when I’m by myself. It’s driving in the rain with 40 other cars that makes it difficult to see. It’s not the car, it’s the lack of visibility that makes it difficult to race in the rain. Last year, our entire weekend was wet. It’d be fun to drive that track when it’s dry.

“I think we’re well-prepared. I was impressed with the hard work that everybody has put in at the shop. We’ve been working hard on the cars and I’m very hopeful for a good weekend. (Car chiefs) Derick (Jennings) and Jeff (Holley) have really stepped up and embraced a different view of looking at the car setups and have been working hard at the shop. I’m very pleased that they’re doing a great job and that’s going to pay off. We tested last week and it went well. We found some things that will benefit us going forward. You’re continually finding things, the car is never perfect, and the things we found last week will make us feel more secure, we found some speed, and I think we’ll have more reliability. I was really able to get up on the wheel and I’m looking forward to see what that means for us at Lime Rock this weekend.

“Connor did really well at the test. It’s amazing to watch him drive. He’s an old soul behind the wheel – at 15 years of age. I think he’s got an awful lot of maturity. He listens, he pays attention to stuff. There are a lot of guys his age who are much less tuned into what’s important, they’re more tuned in to having a good time. He’s smooth, he’s good with the data. It’s refreshing to run with him. I enjoy running with him. It’ll be his first time at Lime Rock, but he’s shown it really doesn’t matter if he’s been to a track or not.”