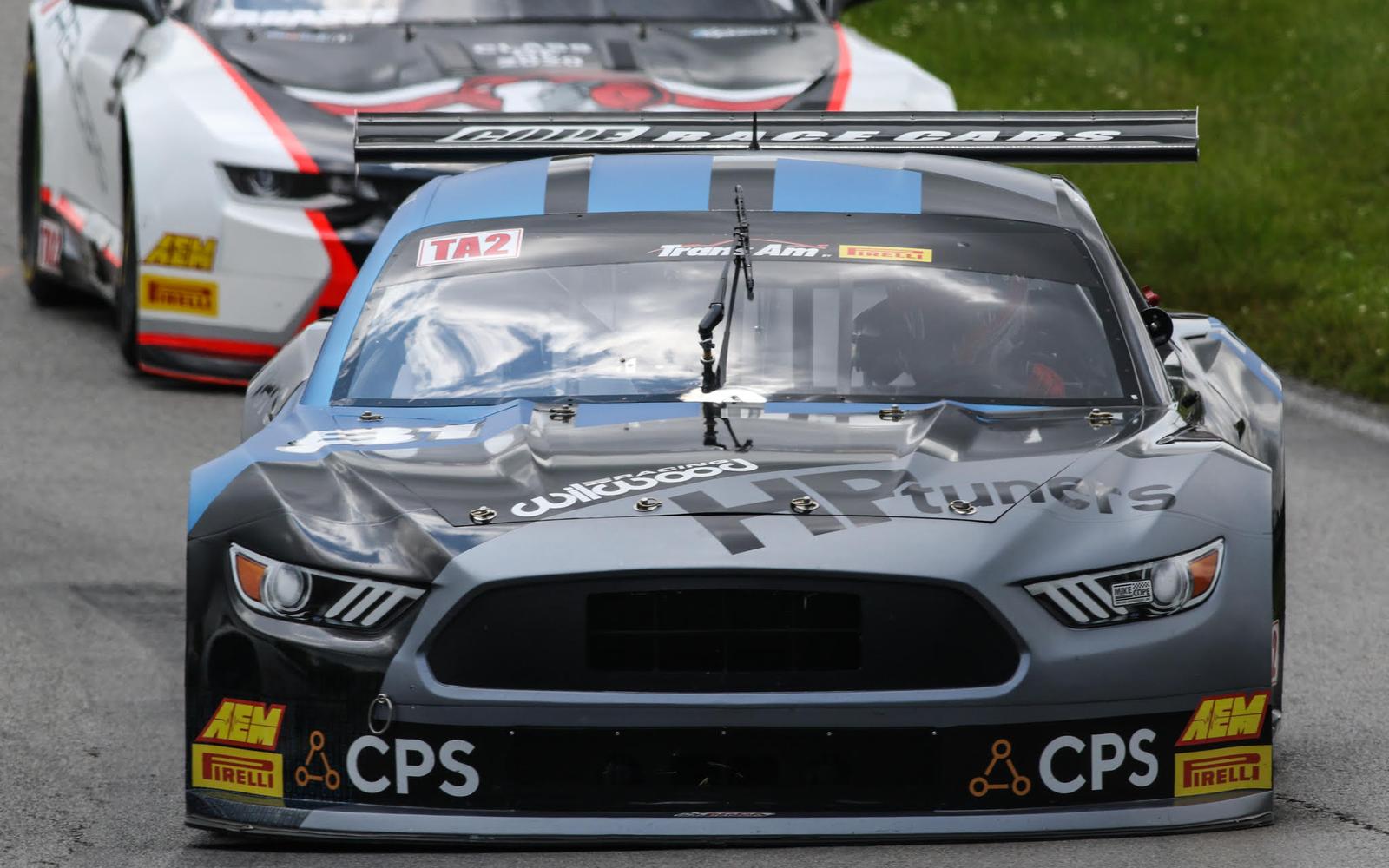 LEXINGTON, Ohio (28 June 2020) – With a strong push to the front early in the race, Thomas Merrill claimed his first Trans Am Series presented by Pirelli TA2® Powered by AEM victory of the season with the No. 81 Diehl-Merrill Racing/HP Tuners/Mike Cope Racing Ford Mustang on Sunday at the Mid-Ohio Sports Car Course.

A late caution flag had set up a final one-lap dash to the checkers, but a post-race scoring recheck determined that the time limit had been achieved before a late-race restart, meaning that the race finished under a late-race caution. That negated a tumultuous final lap that saw Merrill crash while Scott Lagasse Jr. took an apparent victory over Mike Skeen.

“We were under a full-course caution and going for a restart,” explained Trans Am race director Dorsey Schroeder. “Because of the COVID-19 virus restrictions, our timing and scoring official, Bill Skibbe, was in a different building. He couldn’t get the information to us that we were going to run out of time before we got the restart underway. We should have gone checkered flag on the lap we went back to the green flag. So we went back to the last scored lap for the official result.”

The victory was a relished recovery for Merrill, who suffered an off  while leading with just two laps remaining in the season-opening race at Sebring. The victory was his fourth in TA2® competition, in addition to four triumphs in Trans Am West.

“I’m real happy for the Diehl-Merrill Racing crew, they did an amazing job throughout the weekend to solve some electrical issues we had with the engine,” Merrill said. “The HP Tuners Mustang rolled off the truck perfectly, we didn’t change a thing on the setup. I hated it for the other guys, it’s never a good thing to have the result change, but I commend the officials for making the right decision. Mike (Skeen) and Rafa (Matos) are two of the best road racers in the world, and it’s always great to share the track with guys like them. When you pass drivers like them, you know you’ve earned it. It was great to get out front and stretch a gap. Once I was aware that Scott (Lagasse) was in P-2, my mission was to try to match his pace. I got real dehydrated towards the end of the race, and on that last lap I made a simple error. I grabbed a little too much curb in turn seven, hit a hole in the ground and spun the car off the track. It was just a simple error on my part.”

Running without power steering, Matos led the opening 14 circuits and was running fourth on lap 37 when he pulled off with electrical problems in turn eight in the final 10 minutes. That brought out a full-course caution that ended the race.

Lagasse finished second, with Skeen rounding out the podium. Lagasse held off a final challenge by Skeen on the negated restart, appearing to win by .645 seconds.

Rounding out the top five were John Paul Southern in the No. 61 pitrace.com/Southern Motorsports Camaro and Misha Goikhberg in the No. 99 Mike Cope Racing/BC Race Cars Camaro. The two had tangled and crashed on the front straight on the final restart.

Fresh from competing in the Trans Am by Pirelli Esports Championship, Borchetta took a top-10 finish and the Cool Shirt Cool Move of the Weekend in his TA2® debut.

"Today was my first race and it's amazing to come away with this result,” Borchetta said. “I said before the weekend if I made it in the top fifteen then it would be a good day, so today is a great day! The restarts are crazy so I kept my eyes wide open, drove through other's wrecks and had a great race. It was a great learning curve. It was an amazing weekend and the learning curve in TA2 was a fun one.”

It was a tough day for the 3-Dimensional Services Group. Doug Peterson went off with mechanical problems in the No. 87 Mustang on the opening lap. Teammate Cameron Lawrence was in top-10 battle before retiring the No. 8 Mustang after 14 laps.

Sunday’s race ended a layoff of nearly four months for the Trans Am competitors. The series is set to swing back into action in only two weeks, racing at Minnesota’s historic Brainerd International Raceway in the Ryan Companies, US presents the Jed Copham Tribute Weekend on July 10-12.

Watch the full race replay along with other exclusive Trans Am content on the Trans Am by Pirelli App.
Trans Am by Pirelli Racing app available for download:
Android Google Play: https://play.google.com/store/apps/details?id=com.nagra.ion.transam&hl=en_US
Apple IOS App: https://apps.apple.com/us/app/trans-am-by-pirelli-racing/id1494720210