Driving the brand new No. 24 www.PortlandImplantDentisry.com Ford Mustang , McAllister climbed to the top of the standings immediately, beating his best time each circuit until he stuck with the 1:16.076-second flyer that put him on pole. Pulling into the pits after just four laps, McAllister held Ken Sutherland to a second-place start for Sunday’s 100-mile race by 0.052 -seconds.

“It couldn’t feel better to win pole at my home track,” McAllister said. “We worked really hard on this project. It’s great to finally have the car complete and running fast times, especially here at Portland in front of my family and my sponsors.

“Tomorrow is going to be a battle until the very last lap, so getting pole doesn’t mean anything but points, it’s that last lap that counts,” continued McAllister. “It’s critical to have tires left at the end and  we went out there just enough to set the fastest lap so we could save our Pirelli tires for the race.” 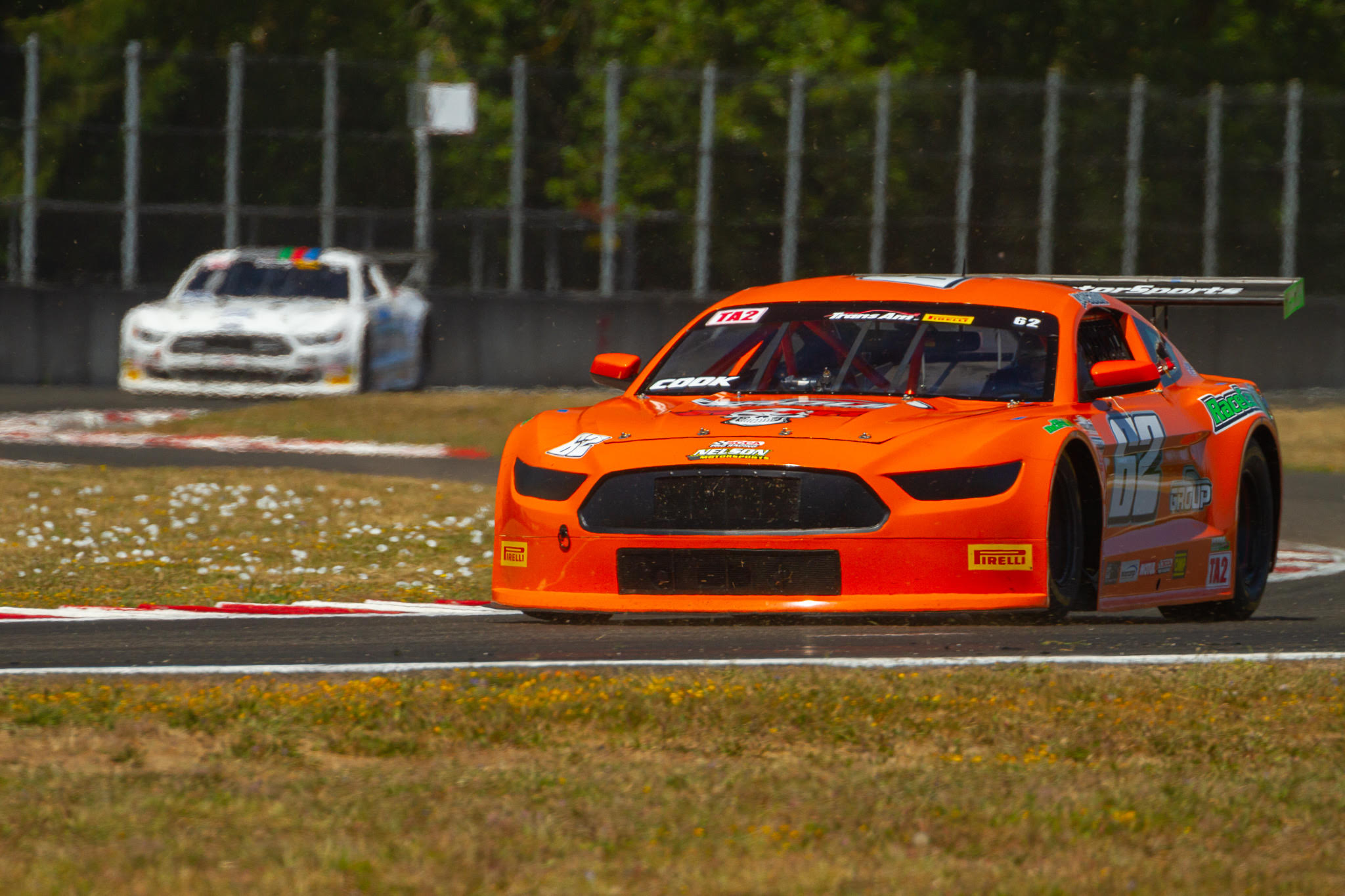 It took Sutherland nine laps to do what McAllister did in four. After setting the second-fastest lap, the Portland native also parked his No. 68 Cascade Sotheby's Chevrolet Camaro after four laps. However, Jeff Holden stayed out on the hot 1.915-mile circuit to pop off a 1:16.49-second lap, edging out Sutherland for second.

After watching his time be topped from the pits, Sutherland went out for another five laps to set his fastest time of the day (1:16.128-seconds), reclaiming second-place to complete an all Portland-native front row.

We were just trying to get a good lap in,” said Sutherland. “It’s our first weekend in this car, I knew Brad (McAllister) was going to be fast so our strategy was just to hang it behind him. (Jeff) Holden came back and set a fast lap, and we had to go back out. I didn’t want to put more laps on our tires, and we were digging on that last push, but it was worth it, we moved up a position.”

Holden did not go back out to challenge Sutherland, and The Ridge pole-starter settled for a second-row start in the No. 11 Joe'sRacing/MidValleyTrans/M1 Chevrolet Camaro.

“It’s never good to use up too much of your tires in qualifying, so we decided not to go back out,” said Holden. “We figured we did about as good as we were going to do on the greasy track and decided to just save the fight for the race. We will just get it to the front the long way tomorrow.”

Fourth and fifth place were only decided by .011-seconds with Chris Cook in the No. 62 RaceCars4Rent Ford Mustang taking fourth (1:16.626-seconds) followed by Matthew Butson in the No. 19 Butson Racing Chevrolet Camaro (1:16.637-seconds) starting in fifth.

In the SGT class, another Portland driver took pole. Cindi Lux out drove her closest class rival (and several TA2® cars) John Schweitzer by more than 13 seconds in the No. 5 Lux Performance/Black Rock Coffee Dodge Viper to take her second SGT pole position start of the season.

“The heat comes into play with the track, that’s one of the unique things about Portland, it is such an old surface that the track will actually lose a second to a second and a half because of it holding the heat,” said Lux. “We had a time that we wanted to meet and once we met that, our strategy was just to park it. Anything after that is just abusing the tires. We got our car set up for the long run tomorrow, so it’s going to be an awesome race.” 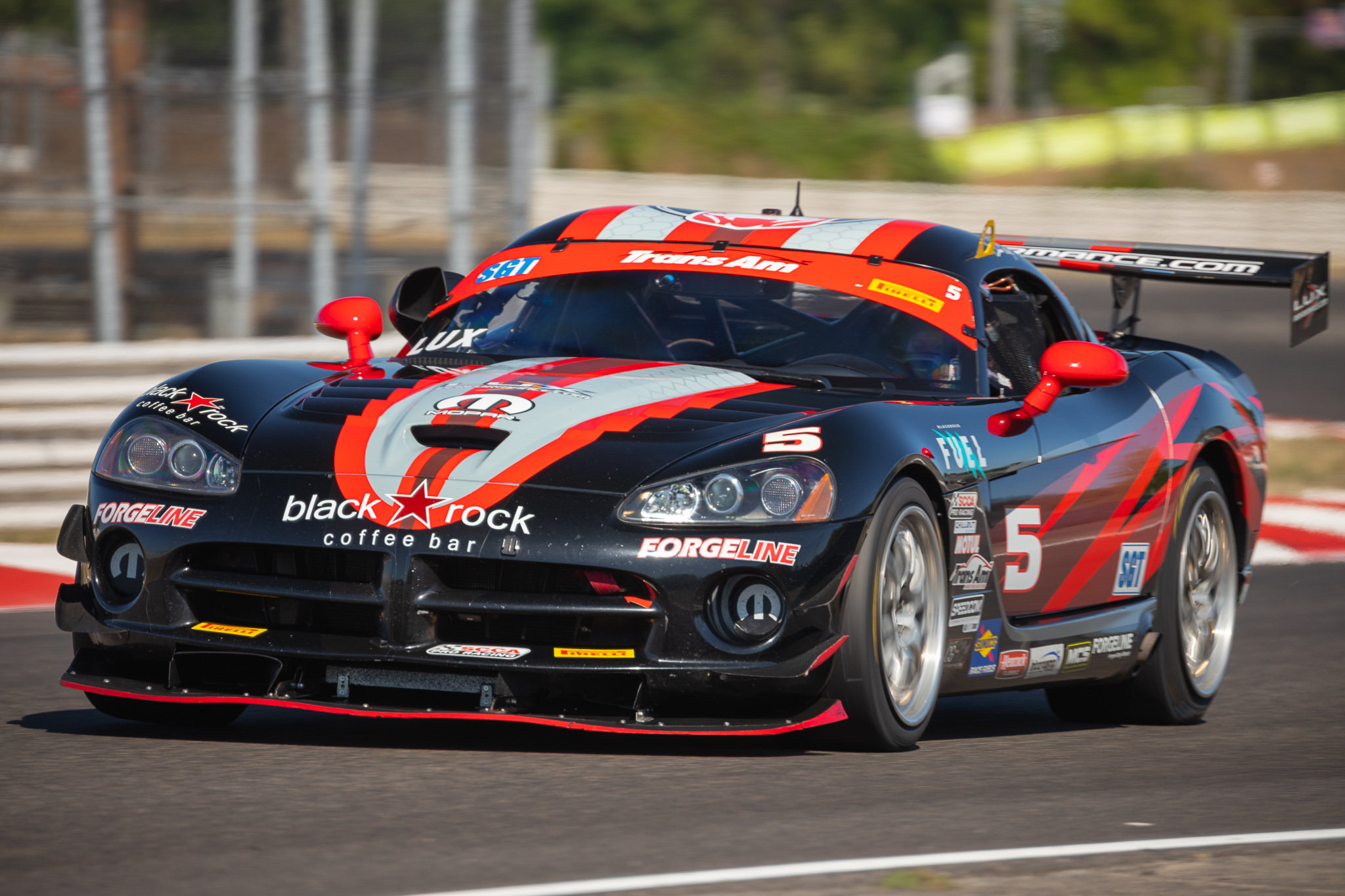 Anderson’s No. 15 Park Place Constructors Chevrolet Camaro suffered severe damage during practice after making contact with the tire barrier in Turn 8 during practice. With the suspension needing a full rebuild among other body damage, Anderson said, “…we will make the race but we won’t look pretty.”

Anderson will start on the back row with someone who has won twice following a last-place start. Rydquist has two consecutive come-from-behind victories (Thunderhill, The Ridge), and on Sunday the reigning West Coast XGT champion will once again contest for the checkered in the No. 47 Racecars4Rent/GroupWholesale Ford Mustang from the back row. Rydquist lost his clutch during morning practice which forced him to miss qualifying.

“We missed qualifying because my clutch started to slip in practice, it wouldn’t make qualifying so the team decided to replace it so we would be race ready tomorrow,” said Rydquist. “The good thing is though that the test sessions gave us a lot of proof in the data that shows we found the speed in the car and myself, this is my first time here. I was eager to do qualifying to surprise everyone that we got everything sorted out so quickly, but we couldn’t do that. We are going to come out and surprise everyone in the race instead.”

The Trans Am West Coast drivers will take the green on Sunday at 11:30 a.m. Pacific for 51 laps or 75 minutes. Follow Live Timing and Scoring all weekend at www.gotransam.com/livetiming