LEXINGTON, Ohio (25 June 2021) – Getting a late start in qualifying due to a time penalty – and then further inconvenienced by a black flag midway through the 15-minute session, Rafa Matos quickly got up to speed and captured his fourth-consecutive pole position at Mid-Ohio Sports Car Course for Saturday’s TA2® Trans Am Series presented by Pirelli event.

It was the 11th career pole for Matos, but his first Motul Pole Award since last year’s race at Mid-Ohio. He turned in a best lap of 1:30.788 seconds in the No. 88 3-Dimensional Services Ford Mustang, which saw his three-year-old track record stay intact due to rain prior to the qualifying session.

Matos was second in afternoon practice – only 0.147 seconds behind leader Skeen, but was penalized five minutes in qualifying due to speeding exiting pit lane during the session. Matos entered the weekend with a one-point advantage over defending champion Skeen, 112-111. 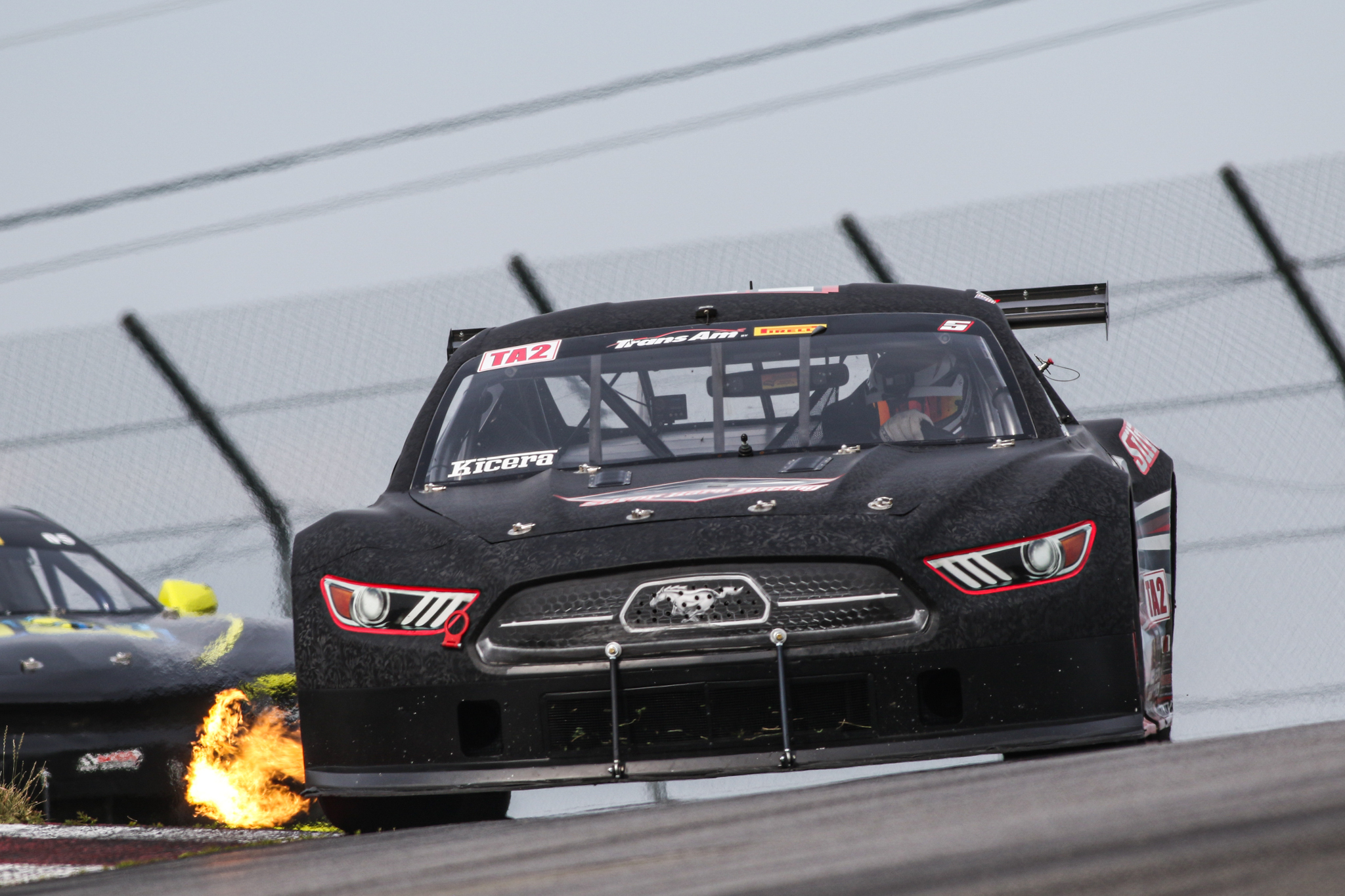 "I was very anxious waiting in the car watching the clock tick down after my five-minute penalty and during the black flag stoppage," said Matos. "I was worried we weren't going to get a chance at a lap, but luckily we were right in front after the track went back to green. The car was really quick. I was able to pass Tyler (Kicera) and Adam's (Andretti) time. I followed Mike (Skeen) and the car just hooked up. Today was a good day."

Running on slick tires, Matos managed only two fast qualifying laps, going off and spinning in the grass on his final lap. His car escaped damage in the incident.

While the rain stopped before qualifying, the track was still very wet. Several teams began the session on Pirelli rain tires, but most of the 27-car field had switched to slick tires by the midway point.

Kicera came in second, missing the pole by 0.286 seconds in the No. 5 Silver Hare Racing Ford Mustang. He started on rain tires and switched to slicks during the session.

"Qualifying like this is a huge confidence boost for us, we haven't been anywhere close like this anytime during the season," said Kicera, a 2020 race winner at VIR. "I feel like we are not going to be starting behind the eight ball for the first time this year. I am really excited to see what we can do. We have a good car, it's been handling well all weekend. Even though we are running up front, it's going to take consistency to win. Today was just a huge confidence boost for the whole team."

Andretti was third, 1:31.271-seconds in the No. 86 3-Dimensional Services Mustang. He will give live in-car commentary from behind the wheel during the live stream of the race. Like his teammate, Andretti ran the entire session on slick tires.

"I knew that I had the best team out there with Peterson Racing and 3-Dimensional Services, and that gave me confidence to go out there and perform," said Andretti, who coached for four years at the circuit. "I've logged a lot of laps here at Mid-Ohio and knowing those tricks in mixed conditions really helped me today. If I had a clean lap without traffic on the last couple laps, I know we would have been a serious threat to Rafa (Matos) and Tyler (Kicera). I am not upset with P3, it's a great place to start here at Mid-Ohio heading into Turn 1. I'll be right behind Rafa to help protect him and get him some more championship points tomorrow."

Points leader Skeen led practice and was first at the black flag in No. 1 Liqui-Moly/Turn 14 Distribution Chevrolet Camaro. He missed a bid for a third-consecutive TA2® pole, coming in fourth with a lap of 1:31.528 seconds. 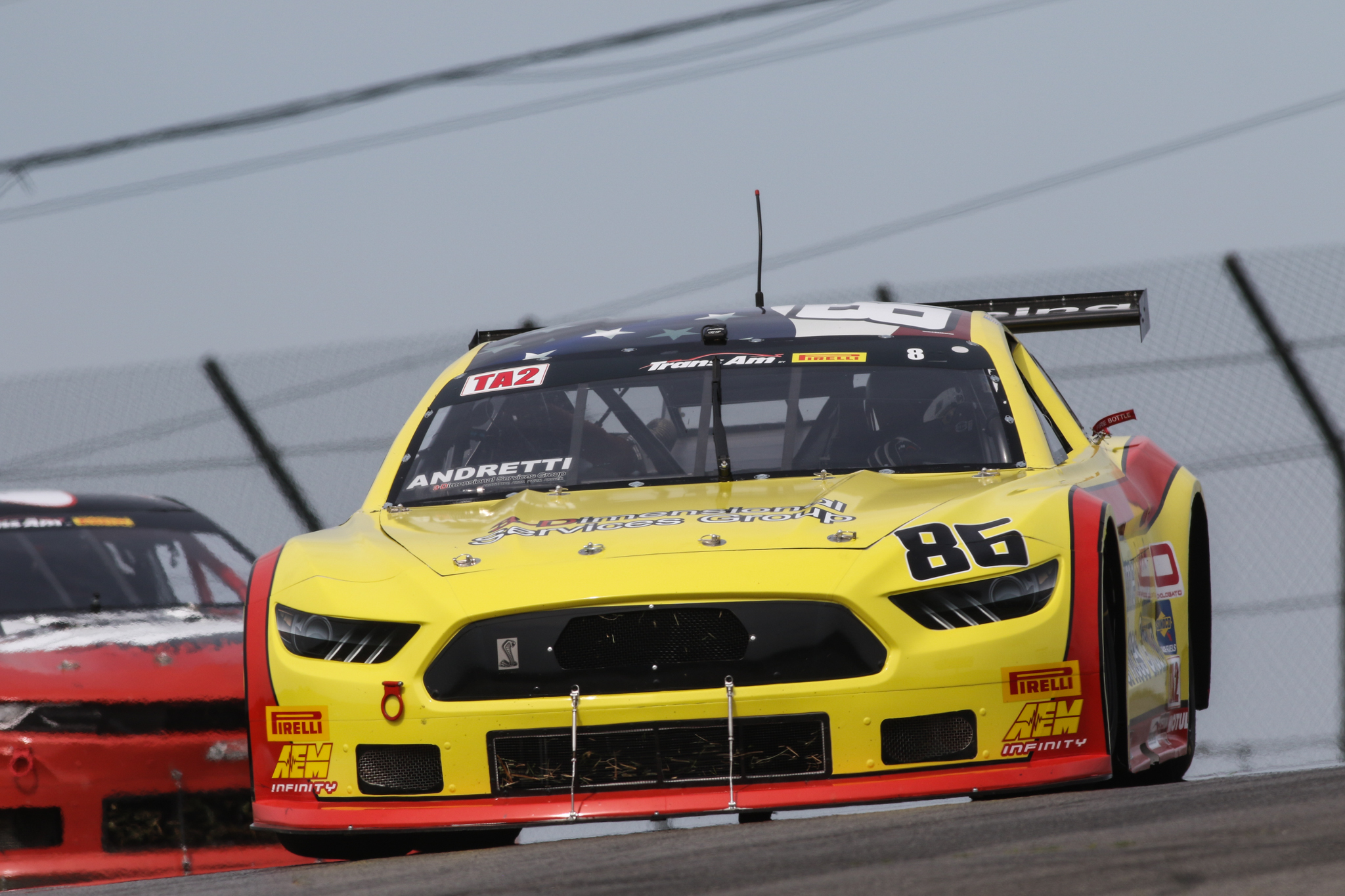 "I'm disappointed with the fourth-place result," said Skeen, who ran the entire session on slick tires. "We had the fastest car out there before the black flag. I started 15 seconds behind the field and passed five cars when setting our fastest lap. After the session went back to green, I couldn't get a clean lap because there was so much traffic. The team worked really hard preparing the Liqui-Moly/Turn 14 Distribution Chevrolet Camaro, and to end up fourth because more time was added to the clock guts me."

Also hurt by the stoppage was TA2® newcomer Adrian Wlostowski. Second at the time of the black flag, he wound up fifth with a time of1:34.510 in the No. 3 Hawk Performance/F.A.S.T. Auto Chevrolet Camaro.

The session was black-flagged near the midway point due to a stopped car in the Turn 4 gravel trap. The session resumed with six minutes of green-flag activity remaining.

Drivers from the TA, SGT, SGT and GT classes had the opportunity to test for 40 minutes earlier Friday afternoon, but the afternoon rain limited participation. Simon Gregg was fastest with a lap of 1:40.053 seconds on his final lap in the No. 59 Peter Gregg Foundation Camaro, followed by Tomy Drissi at1:43.197in the No. 8 Lucas Oil Chevrolet Camaro. Billy Griffin led SGT, 1:50.414-seconds in the No. 14 Griffin AutoCare/Sheehans Towing Ford Mustang GT4.

The full weekend will be live streamed for subscribers on the Trans Am by Pirelli Racing App: https://bit.ly/35EAnND