Lux Performance Conquers Trans Am in The Battle of New Orleans 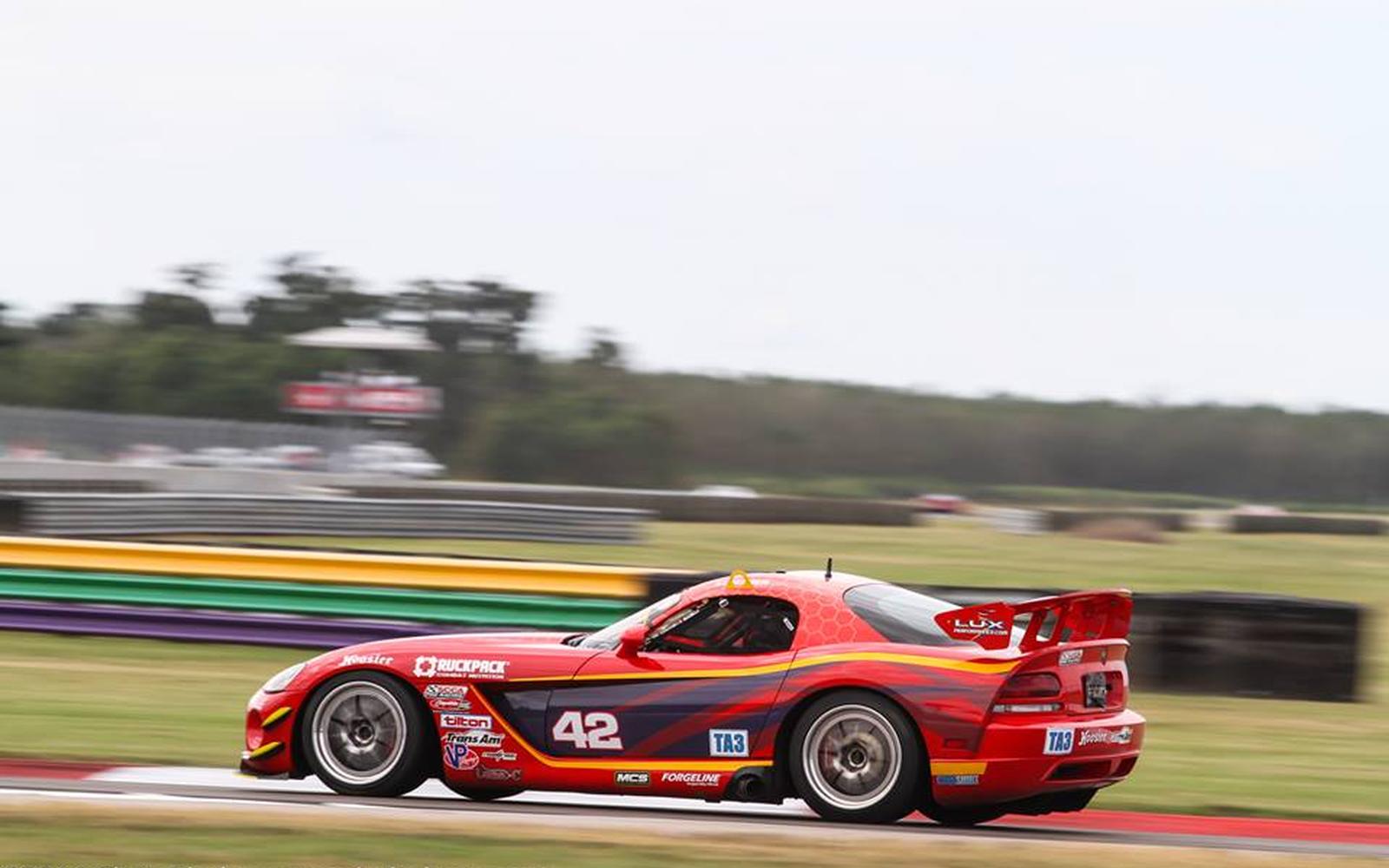 Aloha, Oregon, October 18, 2016| New Orleans might seem like the laid-back capital of the country but NOLA Motorsports Park was anything but a walk down Bourbon Street during Saturday's Trans Am feature. When the "Battle of New Orleans" was through, Lux Performance Group had placed its two Dodge Viper ACR-X entries on the top two steps of the TA3 class podium. Taking his second win of the season was Steve Streimer (Sherwood, Oregon) who nosed out teammate Cindi Lux (Aloha, Oregon) who captured her fourth podium of the short season.

The Aloha, Oregon-based operation has run a limited Trans Am series schedule in 2016 but has shown speed throughout the selection of races. The 100-mile/ 60-minute race features the great muscle and sports cars of this generation including the V10-powered American supercar that Lux Performance has become synonymous with.

Streimer took the pole position in Friday's qualifying session driving the Fred Lux-prepared No. 42 Lux Performance Group Dodge Viper ACR-X. Cindi's lap fell just shy and placed her No. 45 next to Streimer on the front row of the grid in the intensely contested class. Streimer, who has been under the teaching of the Lux for several seasons, got a great start and took the lead entering turn one. With the inside line the stronger of the two, third-place slipped past Lux, dropping her to third for the first lap, pressed hard by Porsche in fourth-place. Streimer continued to hold the lead while the second-place BMW spun coming on the front straight. Lux moved into slot behind her teammate, the Porsche to third. Streimer had a clear view from the windshield of his red Viper while Lux had a mirror, side window and then windshield full of 911. The two battled with each taking the edge in portions of the track that benefited their particular brand. The two ran side-by-side through the quickest portions of the circuit until the rear-engine entry ran wide and spun off course bringing out a full course caution.

Restarts in sprint racing are always highlight reel material and this was no exception. While the pair of Lux machines ran one-two, the bunched field brought the fire into the fight as the green flag waved. Streimer held the lead but behind Lux found herself under an onslaught of pressing bumpers and fenders. She got hit in the rear bumper, sending her and 2 other TA3 cars off course. and two other competitors were spun off course by the third-place running Vette. Lux was the first to gather her machine under control and return to the racing surface to maintain her second-place position. The two would take the checkered flag - which was also under yellow - one-two.

The 2016 season now is at a close for Lux Performance Group. The operation is headed back to its Northwestern shop for an off-season of preparation for 2017. Plans for the next race season are currently under review with multiple opportunities for the team and drivers. Additional entries are currently being considered by the husband-wife run operation.

"This was so much of a better weekend than VIR. We made a lot of setup changes prior to this race and the results showed that they worked. Our drivers raced smart and with the help of a little bit of attrition, we ended up having a great weekend. There is a lot of diversity in this class. When we have cars not turning the fastest lap times during the race but they are so reliable, that is how we make the difference. And this reliability comes from Dodge building a great car and the tremendous crew members we have. Everyone has so much passion and commitment that it is impossible to stop the results."

"Coming in from VIR, I really didn't know what to expect at NOLA. We got beaten pretty badly in Virginia but the team never gave up. Everyone was working hard before this race to get our cars better. NOLA is a busy and bumpy track. There really isn't too much time you're steering wheel is straight! That race kind of reminded me of a Bristol NASCAR race: cars running hard and super close and a small mistake have big ramifications. You are fighting the track, your car and the competition every second of that race. Of course, there was a little light rubbing as well but its all part short track racing at NOLA. Steve ran a great race and deserved to win. Anytime you can come away with a team one-two finish in a series as competitive as Trans Am, it is always good way to go into the off season."

"What a weekend. Coming into NOLA on the heels of what was our last race at VIR we did not have high expectations. That said, as soon as I hit the track on test day in the Lux Performance-prepared Viper, I knew we had a strong car for the weekend. There is no one that can better prepare a Dodge Viper than Fred. But, he continues to develop this car every week and, frankly, we had the set-up dialed this weekend. Fred and the entire Lux Performance team make my job easy. I dedicate this win to Team Lux Performance 2016; Fred, Matt, JP, Chris, Robert, Paul, Keith, Jeff and of course my friend, mentor and teammate Cindi Lux."

Lux Performance Group provides full-service race services and custom components to both club level and professional series drivers. Their truly unique and eclectic background provides a limitless realm of possibility in the any area of car construction - including custom fabrication, specialty safety structures, platform development, hybrid technologies and electric motor specialization - as well as business plan development and implementation. A true "one stop shop" for all things automotive.

See more about the Lux Performance Group's 2016 season at https://www.youtube.com/watch?v=-PDB6AF90Gc&feature=youtu.be

About Trans Am - The Trans Am Series, America's Road Racing Series, began igniting the passion of motorsports fans across the world in 1966 and has been home to some of the greatest names in road racing. Today, Trans Am continues to honor its legacy, while challenging the status quo in racing, through meaningful racing platforms and a driver-oriented focus. The Trans Am Series is operated by The Trans Am Race Company, LLC (TARC), through a five-year agreement in which TARC oversees the management and marketing of the Trans Am Series. SCCA Pro Racing sanctions Trans Am events and provides operations services to the Series. More information is available at www.GoTransAm.com .