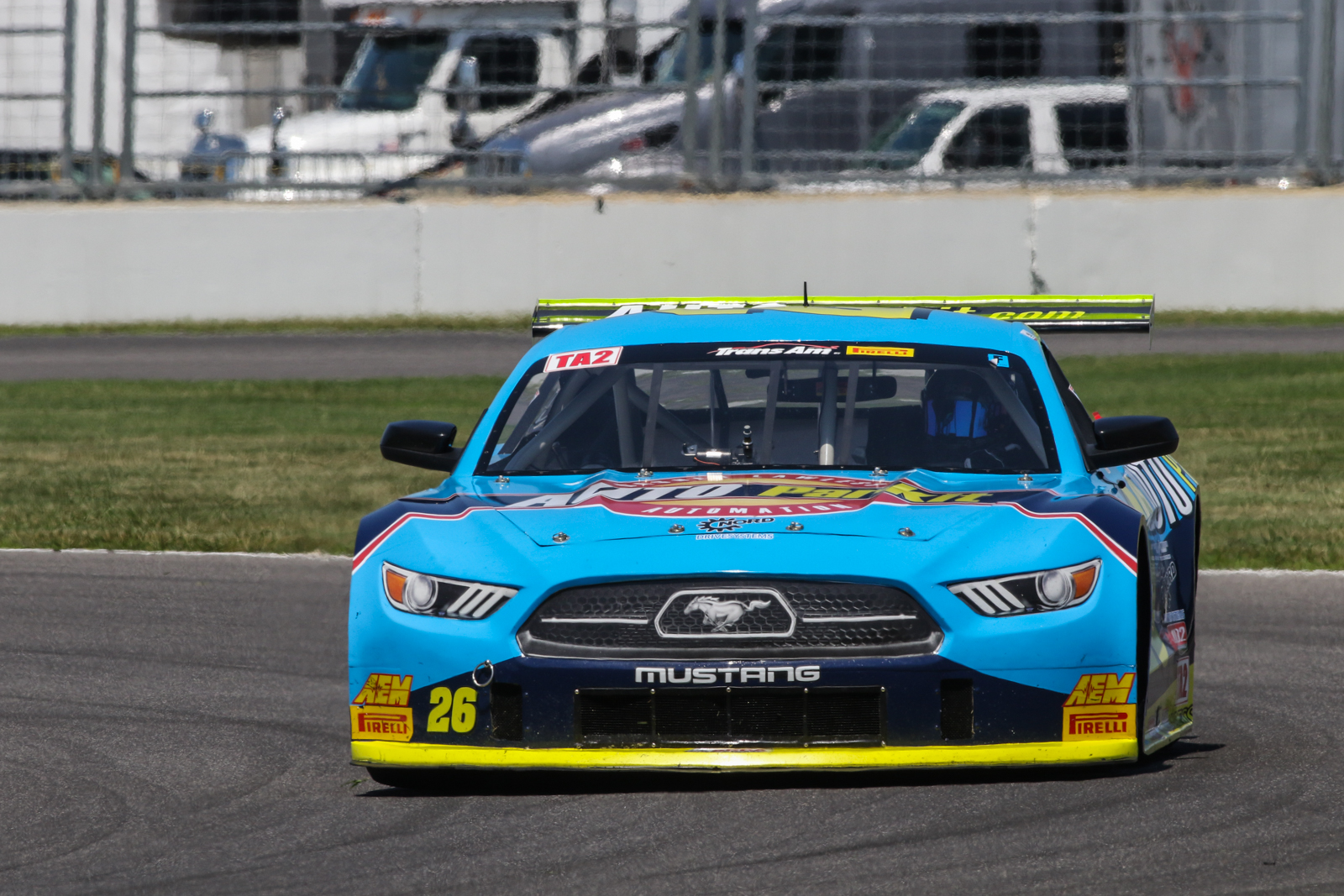 After a Trans Am Series presented by Pirelli debut in the TA2 class at Homestead-Miami, Dasher Lawless Racing’s Lawless Alan returns to Trans Am competition this weekend at Indianapolis Motor Speedway, to continue to hone his skills against some of the top road racing talent in the country in the No. 26 Mike Cope Ford Mustang.

Currently ranked second nationally in NASCAR’s NWAAS Division I, Lawless comes to Indianapolis Motor Speedway and Trans Am to gain more road course experience; as the 18-year-old talent out of Sherman Oaks, California, begins planning for his future in the sport.

“I started out in legend cars on the West Coast at Irwindale, Kern County Raceway and Las Vegas Motor Speedway and from there moved into Irwindale trucks and eventually late models.  We’re in Trans Am to get good road course experience, and the TA2 cars are the closest you’re going to find to stock cars in that world.  I can bring good information and experience from circle tracks here, and I can take what I learn here  to circle tracks and the stock car ranks.”

To gain that experience the Dasher Lawless Racing team turned to a familiar name to those in the circle track ranks: Mike Cope Racing Enterprises.  After a top fifteen   finish at Homestead-Miami, Alan is to ready build on his first Trans Am experience and take the next step, a step that Mike Cope feels Alan is ready to take.

“The ability that I saw from Lawless at Homestead reflected natural talent,” said Cope.  “I’ve been around this industry for a long time and I’ve seen a lot of kids come and go, but this one has what it takes to become a champion in this sport.”

“The racing has been a lot different here,” said Alan.  “Circle tracks drive differently, obviously, and people race them differently too; it can be such a different world.  But most of it has been just adapting to the car.  We have so much more down force than the stock cars have.  You have to learn to trust the car and trust yourself.  We just went over the video. In turns eight and nine here, I’ve just got to learn to trust myself and the car.”

Getting up to speed on the road course is more than just mastering a craft to Alan, it is about being ready to capitalize on future opportunities and when that moment arrives, the chance to shine.

“Road courses are opportunities for guys to showcase their talent who otherwise might not get the chance,” said Alan. “Circle track drivers are notoriously bad at road courses.  If somebody comes in average equipment but knows their way around a road course, they can  run upfront and create opportunities for wins.  The top level of drivers, they’re realizing that now— road courses are a part of every season and they count just as much.   They’re working on mastering those just as much as circle tracks.”

“Ultimately I want that experience here in Trans Am,” said Alan.  “I’m looking at K&N West cars, they race at Sonoma and other NASCAR road courses— it’ll be so much easier coming at those with this experience in hand.  It’ll be an opportunity to  do well.”

Alan’s preparation for tomorrow doesn’t stop at road racing though.  This fall he will be attending the University of Alabama beginning work towards a degree in mechanical engineering.

“I’m going to major in mechanical engineering,” said Alan.  “I chose Alabama because of their connections to the automotive world and their automotive engineering program.  It’s in the heart of NASCAR country; I’ll still be able to race while getting my education. I want to be able to talk to crews in their own language—to understand the car at every level.”

As for this weekend the Mike Cope team aims for a top ten finish, but if you ask Alan his goal is really a spot on the podium and a shot at the win.

Fans can follow Lawless Alan throughout the weekend on Instagram at Lawless_Alan and at DasherLawlessRacing.  More information on Dasher Lawless and the Lawless Racing team can be found at https://www.dasherlawless.com

Race Track Circuit: There are 6 different tracks that Lawless currently races on.

In Lawless Alan's rookie season in the NASCAR WHELEN Late Model Series (2017) he led all rookies in points at Irwindale Speedway, had a win, 6 podium finishes, a dozen Top 5s and more than 20 Top 10s. He finished the season 4th in points in California and 44th in points nationally out of more than 1,000 drivers.
A PERFECT START. In 2018, in the first race of the year, he won the Late Model Winter Showdown at Kern County Raceway, qualified on the Pole (1st) and set a new track record beating the old record by more than 3/10s of a second! He won his second race of the season at Irwindale!

Lawless will be running for Championships this season at Irwindale Speedway and Kern County Raceway and will run more than 30 races this season in total. He will also be making his debut in the Trans Am Series running both Homestead Miami and Indianapolis Speedways for Mike Cope Racing with major sponsorship from AUTOParkit™ and Siemens. These races are televised on CBS Sports with more than 6 million viewers.

Lawless has major sponsorship from AUTOParkit and Siemens with secondary sponsorship from Nord Gear and JD2 Inc. He is currently filming his first commercial as a spokesman for AUTOParkit and is slated to record a number of radio spots for the company as well. Lawless Alan is the projected favorite in the race for the Championship. Let him put your company in the Winner’s Circle this season.

Dasher Lawless is a Services Company and Original Equipment Manufacturer with four major divisions and product lines that include AUTOParkit™, AUTOStorit™ and AUTODockit™ automated systems