Gar Robinson Garners Eigth Podium of the Year, Finishes Third at Circuit of the Americas 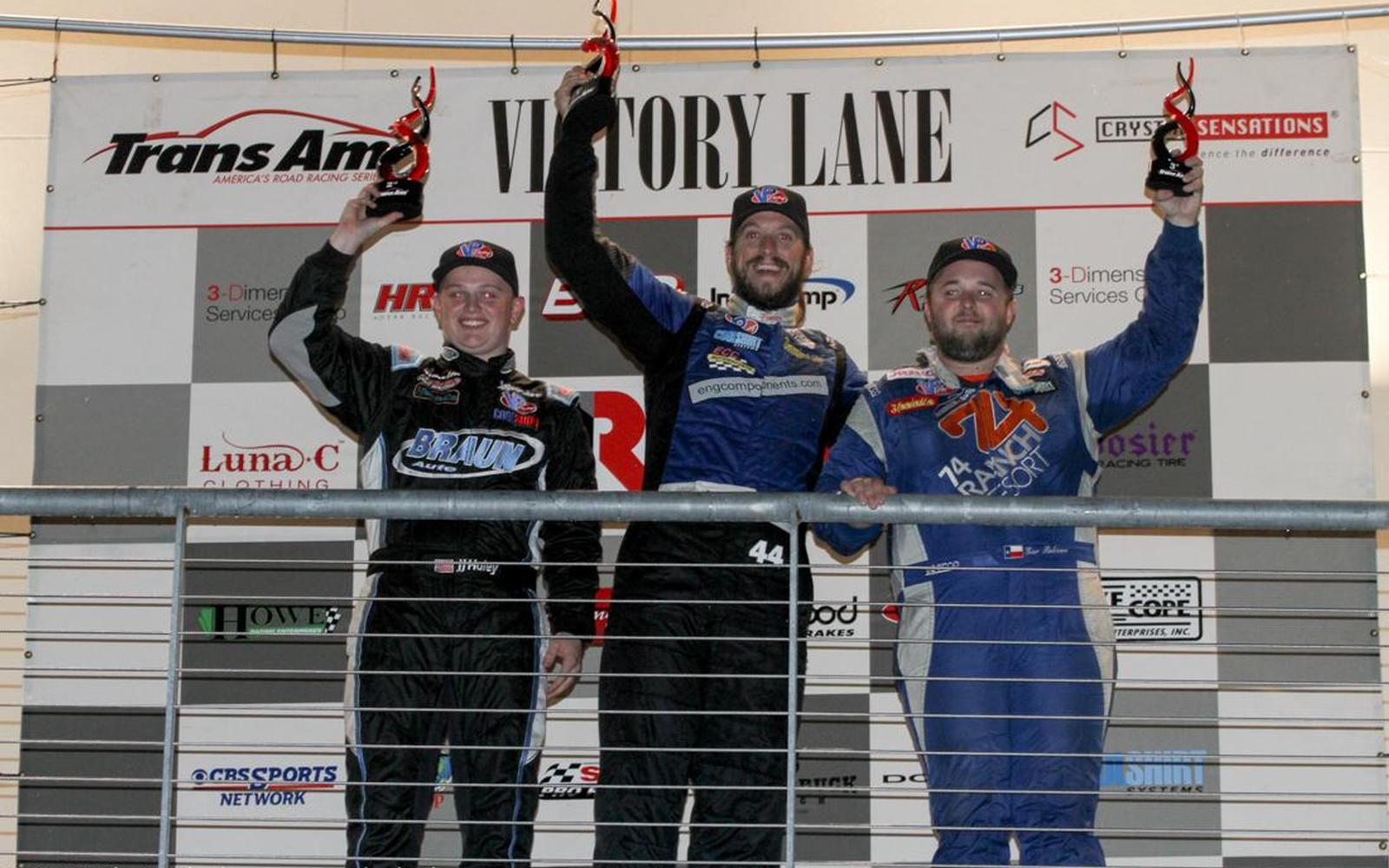 Despite mother nature's best efforts to thwart his race week, Gar Robinson earned his eighth podium finish of the 2015 Trans Am season at Circuit of The Americas (COTA) in Austin, Texas last weekend. A native of San Antonio and a frequent visitor to Austin, Robinson was eager to race the No. 74 Chevrolet Camaro at his home track and looked forward to the event all season long. In Thursday's Fast Five Qualifying session, he placed second in the TA2 Class, .115 seconds off the pole, and finished third in Saturday’s afternoon race.

The race week began with a photo shoot at the Alamo, to commemorate Gar Robinson and teammate Shane Lewis' rookie season in the Trans Am Series. The drivers posed along with their team and race cars just after sunrise on Tuesday while noted motorsports photographer Blake Blakely captured the moments.

From San Antonio, the team drove to Austin to load in at COTA and prepare for Wednesday’s four testing sessions. Weather forecasts called for heavy rain and wind throughout the weekend, with the worst predictions noting 2 inches of rain and 20 mph wind gusts. Luckily, the practice and qualifying sessions on both Thursday and Friday were not impacted. In the No. 72 Chevrolet Camaro, Lewis led the TA2 field in practice on Thursday and qualified in fourth later that day. Robinson came in fifth in practice and moved up to second place in qualifying.

The series held a warm up session on Saturday morning, November 7, 2015, and even with a wet track and light sprinkles, the Robinson Camaros were in good form. The green flag for the race was slightly delayed, yet the rain clouds moved away from the track in time for the 4:15 pm CT start. The top 10 in the TA2 class shuffled quickly with aggressive moves by many of those in the hunt for a win and Championship points. Robinson overtook the pole sitter and led the field, fell back to sixth amid many caution laps and competitors also making illegal moves, and eventually charged up to a third place finish.

"I’m very disappointed with some of the events that took place during the race - and disappointed in Trans Am for not calling it during the race,” noted Gar Robinson. "As for racing at COTA, there’s nothing like racing at home. It was so much fun racing in the Lone Star State with my TA2 friends. I can’t wait to do it again next year."

After starting in fourth and getting shuffled back to seventh, Lewis finished the race in sixth place. "I love racing at COTA. What a great facility, and the people there are so happy to have us," said Lewis. "Was it a rough race? Yes. Was it more physical with some moves that shouldn't have been made? Sure. Would I go back to COTA for a Trans Am race? In a heartbeat."

After 11 rounds of the 2015 Chase for the Trigon Trophy, presented by 3-Dimensional Services Group, Gar Robinson is in second with 267 points, 13 points behind the leader and 6 points ahead of third. Shane Lewis is in fourth with 228 points, 33 points behind third. In the 2015 TA2 Rookie of the Year standings, presented by Wilwood Disc Brakes, Robinson maintains the lead, while Lewis is in second, 17 points ahead of third. Robinson has eight podium finishes in 2015, two of which were wins at Mid-Ohio Sports Car Course and NOLA Motorsports Park. Lewis has three podium finishes and also won the 3-Dimensional Services Group Triple Shot Showdown in the TA2 Class in August.

The Trans Am season concludes with Round 12 at Daytona International Speedway in Daytona Beach, Florida. The Bullet Liner 100 will be held this Saturday, November 14, 2015, at 10:30 am ET. The Daytona race will be televised on the CBS Sports Network on Sunday, December 6, 2015, at 1:00 pm ET. Trans Am’s Bullet Liner Championship Weekend is paired with Historic Sportscar Racing’s Classic 24 Hour at Daytona presented by IMSA.