Francis and Buffomante Victorious in Trans Am Finale

DAYTONA BEACH, Fla. [November 11, 2017] – The 2017 Trans Am Finale at Daytona International Raceway saw teams and drivers battle early showers, multi-class traffic and an ever-changing track with Ernie Francis, Jr., and Tony Buffomante grabbing TA and TA2 class victories to close out the 2017 Trans Am Championship presented by Pirelli.   Sharing in the spoils were Tim Kezman, in the TA3 class, and Todd Napieralski, finally capturing a 2017 TA4 victory after five second place finishes and nine podiums.

For Francis, who locked up the TA class championship two rounds ago, the victory marked his 10th of the season in the No. 98 FramelessShowerDoors.com Ford Mustang.  However, early showers seemed set to spoil Francis’ day, as the early stages of the race belonged to Tomy Drissi, in the No. 8 Murder on the Orient Express Chevrolet Corvette, who was the only member of the TA class to take to the 3.56-mile Daytona track with Pirelli rain tires.

Drissi would build a lead spanning over 40-seconds on Francis, the pole sitter, during the first eight laps until the field went under a full-course caution.  The race would restart on the 11th lap; however, the track had dried considerably forcing Drissi to pit for a tire change on the 12th lap.  Francis, then running second, took the lead and comfortably led the remaining 17 laps en route to the checkered flag.

“It was definitely an interesting race,” said Francis. “First off, I’ve got to thank Frameless Shower Doors, R & B Company and the Buoniconti Fund.  I was honestly questioning the strategy at the beginning going out on slicks, those first couple pace laps were very, very slippery.  Even the start, it was probably one of the most lack luster starts in TA we’ve ever had, no one really went anywhere.  Drissi was out there on wet tires, so we knew he’d be fast.  We knew the track would most likely come our way; and after the restart it dried out considerably and we took the lead, and cruised to the finish from there.”

2017 marked Francis’ debut in the TA class after three consecutive TA4 class championships, a debut that turned into domination with the No. 98 capturing ten wins, seven poles and 11 podium finishes.

“It’s been crazy,” said Francis.  “A year ago we were just starting to think about this, trying to put together a TA program that could compete or even win a race.  It was a far off dream to win a championship, never mind 10 races.  The first season in the TA class, with the No. 98, it’s just been incredible and we look forward to next year.”

Francis was followed past the checkered flag by RJ Lopez, in the No. 06 Republica Brewing/ Optica Lopez Chevrolet Corvette, who finished second, capturing his second podium finish of the year in his third appearance. Lopez began the race in sixth position, running third early on before falling back to sixth before the restart—finally taking second position on the second to last lap.

Vinnie Allegretta, 2017 championship runner up in the No. 41 TA Sights & Sounds Chevrolet Corvette, would finish third for his seventh podium finish of the year after starting second and running as low as seventh on lap 15.

The TA class top five was completed by Amy Ruman, in the No. 23 McNichols Company Chevrolet Corvette, and Tomy Drissi finishing fourth and fifth, respectively.  Ruman’s finishing position was enough to secure third on the year end podium, tied with Simon Gregg in points but winning the tie breaker by virtue of more second place finishes (two to one). 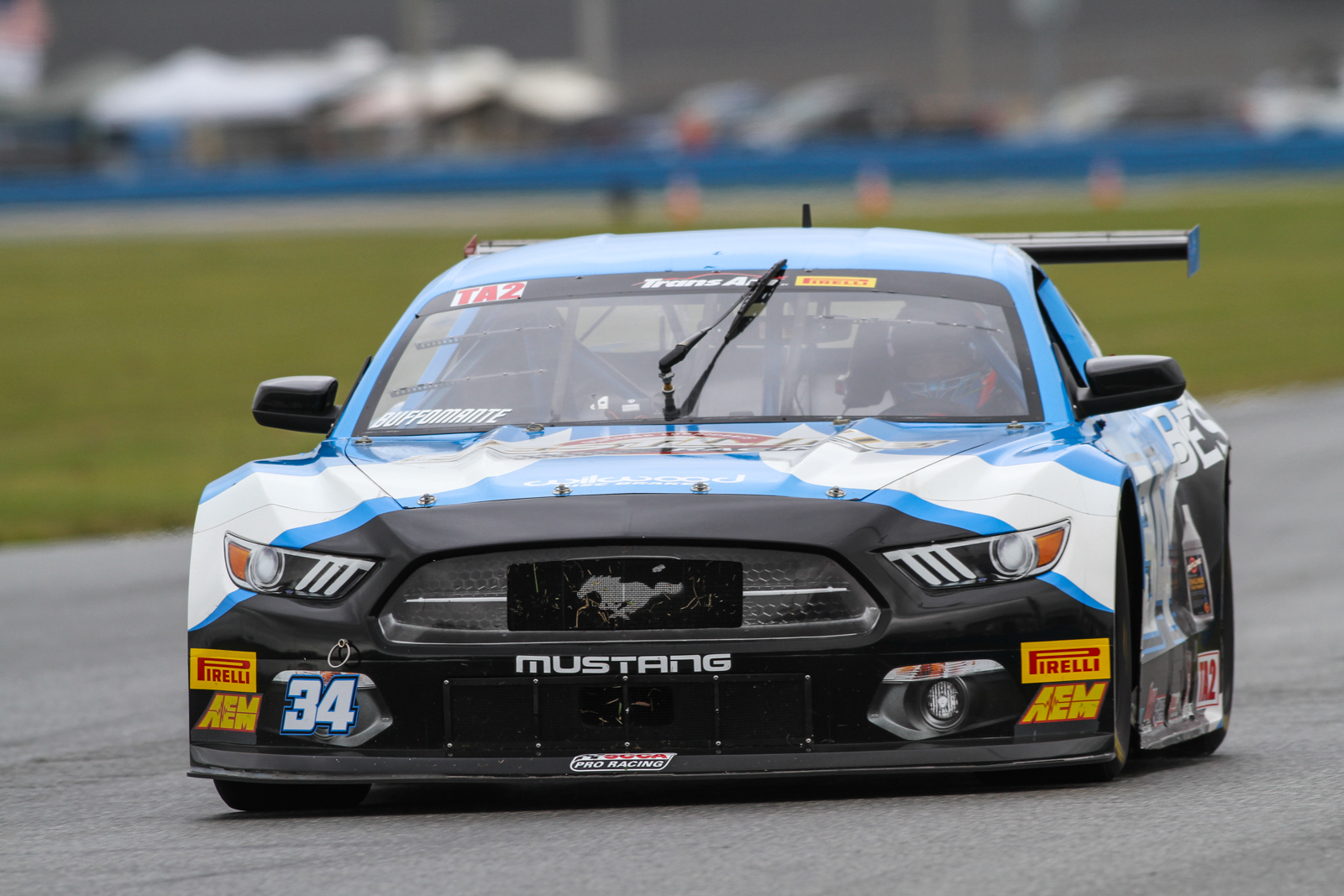 In TA2, Tony Buffomante, in the No. 34 Best Line Superior Lubricants Ford Mustang, emerged victorious for his fifth win of the season.  Like Francis, Buffomante began the race on pole but was quick to relinquish the position, falling back to sixth position in the 19-car TA2 field.

Curt Vogt, the sole member of the TA2 field on rain tires, led the initial laps in the No. 12 Cobra Automotive Ford Mustang, with Cameron Lawrence, in the No. 79 Class Auto Centers Chevrolet Camaro, taking the TA2 lead on the restart. Buffomante continuously climbed, taking third on lap 17, second on lap 22, and finally overtaking Lawrence for the lead on lap 27.

The victory marked a substantial rebound for Buffomante and the Mike Cope Racing crew, having been knocked out of TA2 championship contention and the race one round prior at COTA after contact from behind on the No. 34’s first lap out.  The finishing position also secured second place in the year end points, overtaking Shane Lewis 304 to 299.

“We knew the pace would come once the track started to dry out,” said Buffomante. “Frankly, I didn’t want to do anything dumb in the first half of the race.  We knew that the No. 34 Mike Cope Ford was super fast, being on the pole with a track record; so we knew we had the pace, but again, we played it safe the first half.  I was just listening to my dad on the radio, listening to times and for when to go; and when it was time to go, it was time to go.  It feels good; I’ve never won here before.  Thanks to Mike Cope, Wilwood and Ilmor; it’s been an up and down year but they just don’t give up and my crew chief Travis Cope just makes it happen.  I just can’t thank the Mike Cope team enough; the win here at Daytona is small consolation, but its consolation nonetheless.”

Lawrence would finish second, closing out the 2017 season in fine form with three podium finishes in as many appearances, while debutant Josh Bilicki, in the No. 25 BC Race Cars Chevrolet Camaro, finished third.   Lawrence would end the race with the most laps led and the fast lap of the race for TA2, a 1:52.732. 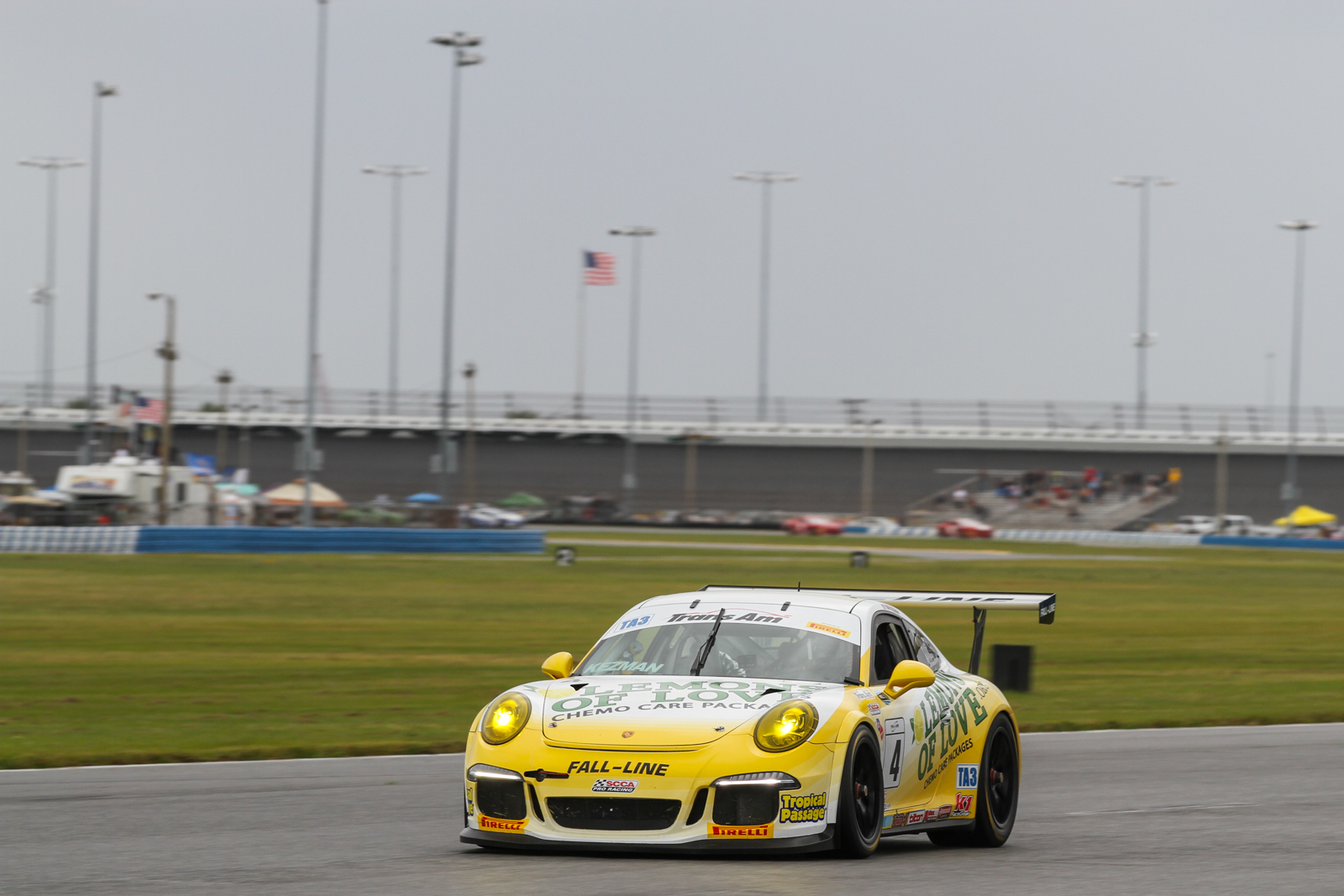 “It’s been a great season,” said Kezman. “The team is everything.  The Fall-Line guys, on the shop, on the road, we couldn’t do this without them.  We knew something bad would have to happen to Mark for us to have a shot at the title, but it didn’t.  He earned it; congratulations to him on the championship.  It’s great to win at Daytona, thanks to Trans Am, to Pirelli tires, and Lemons of Love.”

Kezman had been in title contention with Boden entering the round; however, the latter only needed to finish fifty-percent of his laps at Daytona to clinch the title—a feat made somewhat difficult by a flat tire midway through Boden’s race.

“We certainly made it interesting,” said Boden. “We unfortunately lost a tire running second, but it was absolutely an interesting race with all those cars out there and those conditions.  Cars were every which way and traffic tying things up, but it was a great day for Fall-Line with Tim’s win and Tom’s (Herb) third— it’s been a fun year, thanks to Trans Am and all the great tracks we’ve been to and the great crew at Fall-Line. It’s been a lot of fun.”

Conor Flynn, in the No. 94 Irish Mike’s Automotive Porsche 997, finished fourth in TA4 while Boden completed the TA3 top five. 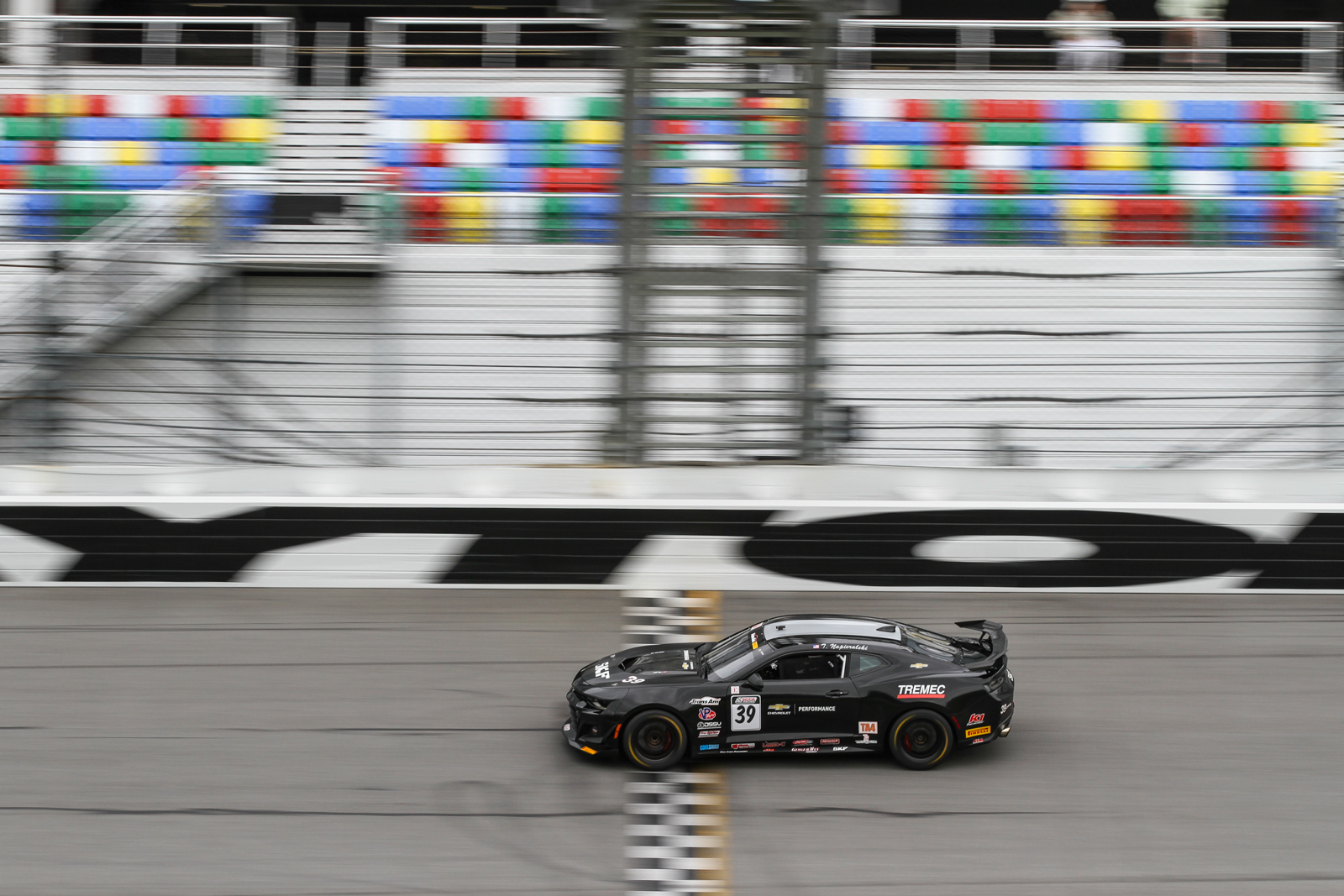 In a TA4 class competition that saw four different race leaders, Todd Napieralski, in the No. 39 Chevrolet Performance/ Tremec Chevrolet Camaro, finally secured his first win of the 2017 season after five second place finishes.   Napieralski began the race in second position, falling back to fourth over the initial wet laps, before moving up through the field and eventually overtaking TA4 champion Brian Kleeman, in the No. 07 DWW Motorsports Ford Mustang,  for the lead with only three laps remaining.

“We took a chance on a full dry setup,” said Napieralski.  “We didn’t disconnect any sway bars, and in the beginning it was just survival out there.  Once the track started to dry out I was able to find some traction out there, and once it was fully dry Brian (Kleeman) and I had a great battle going— he’s a great driver and congratulations to him on the championship.  We were able to manage things and tried to get by him three or so times, and he was just too strong.  Then with about three laps to go we got around him and got our first win of the season.  Going into the off-season with this momentum is great and winning at Daytona, it’s a bucket list victory— it feels awesome.”

Kleeman would finish second for his ninth podium of the season, while Ramin Abdolvahabi, in the No. 02 DaVinci Plastic Surgery Aston Martin Vantage GT4, captured his first career Trans Am podium with a third place finish.

For moving up through the TA2 field over the final stages of the race, Tony Buffomante was awarded the COOLSHIRT Systems Cool Move of the Race; while the Total Performance Racing team of Todd Napieralski was awarded the Pitboxes.com Crew of the Race for securing their first win of the season.  Napieralski’s crew chief Aaron Carson was awarded the Traq Gear Crew Chief of the Weekend as well.

The 2017 Trans Am Finale ran for 29 laps, 103.24 miles, around the 3.56-mile road course, going under a single full-course caution from laps 8 to 10 to retrieve the No. 75 Franklin American Mortgage Co Ford Mustang, of Carl Wingo stopped on course in an unsafe position.  The race marked the first time that TA2 has run alongside TA, TA3 and TA4 in multi-class competition all season.

In total, 43 competitors participated in Trans Am’s ultimate round, with the TA2 class capturing seven of the top ten overall positions.

The following penalty was enforced by Trans Am Series Officials following the conclusion of the race: Claudio Burtin, in the No. 7, was penalized for avoidable contact and excluded from the results.

Top Three in Trans Am Championship Points By Class

The Trans Am Series presented by Pirelli will return to the track in 2018, opening the season at Sebring International Raceway on March 4, 2018.