After a historic 2017 season and in advance of a busy 2018, Ernie Francis sits down to talk Trans Am, Rev Racing and what’s next

It was March 5, 2017, at Sebring International Raceway and Ernie Francis, Jr., was on the cusp of victory in dominant fashion.

The brand new No. 98 Ford Mustang had been strong all weekend, with Francis grabbing pole and leading every lap despite having only  a handful of shakedown laps behind the wheel.  A storybook TA class debut for Francis, then the three-time TA4 champion, seemed only minutes away, but an O-ring on the No. 98 had other plans— it failed with under a quarter of the laps remaining, forcing Francis to pull to the side, his day over.  A first taste of TA class victory would have to wait.

Francis’ wait wasn’t a long one.

Sebring stood a harbinger of what was to come, and four weeks later Francis captured his first TA class victory surrounded by friends and family at his home track of Homestead-Miami Speedway.  It was the first of an astonishing ten victories for Francis through the 13-round 2017 season— seeing the then 19-year-old wrap up the TA class title at New Jersey Motorsports Park on October 8th, a full three rounds before the championship’s conclusion.  The victory would also push Francis’ career total to 32 wins across all classes, the most in Trans Am history.

Even following the Trans Am finale at Daytona International Speedway, additional career milestones continued to come Francis’ way.  Francis would emerge from a two-day tryout at New Smyrna Speedway, a part of NASCAR’s Drive For Diversity, as member of Rev Racing, soon to be tackling road courses in the  K&N Pro Series while participating on Rev Racing’s late model team.

A few weeks later came an opportunity to test behind the wheel of the No. 67 Ford GT of Chip Ganassi Racing at Daytona International Speedway, giving Francis a taste of IMSA GT Le Mans engineering— a ride usually reserved for the likes of Ryan Briscoe, Richard Westbrook and Scott Dixon.

It was a whirlwind conclusion to the 2017 calendar year, and in its wake Francis sat down with Trans Am to reflect on the past and future alike with the 2018 season just around the corner.

Now that you’ve had the time to catch your breath and reflect on the championship and 2017 collectively, what was the season’s experience like?

“It’s just been a crazy year,” said Francis.  “There’s no other way for me to put it.  This season really extends back to the middle of 2016 during the Detroit Grand Prix weekend when we really started floating around the idea of moving up to the TA class.  From then to securing the championship at New Jersey, it’s all been unreal.  Obviously we wanted to contend, you always race to win; but we didn’t really think a first year championship was in the cards— to do what we’ve done, it’s really just been amazing.”

If we go back to Sebring, your true debut in the No. 98, it was a perfect start until it wasn’t—but was the experience an eye-opener in regards to the season’s potential?

“If you think about it that way, yes it was an eye-opener,” said Francis.  “The car was new; we had maybe five laps on it and were able to put it on pole.   We went on to lead all of the laps up until we had a part failure, so that was disappointing, but the experience was still amazing.  For us to hit the ground running and have that speed— for me, for our car builder Mark Meissen, it gave us permission to believe we could make a go at the championship.” 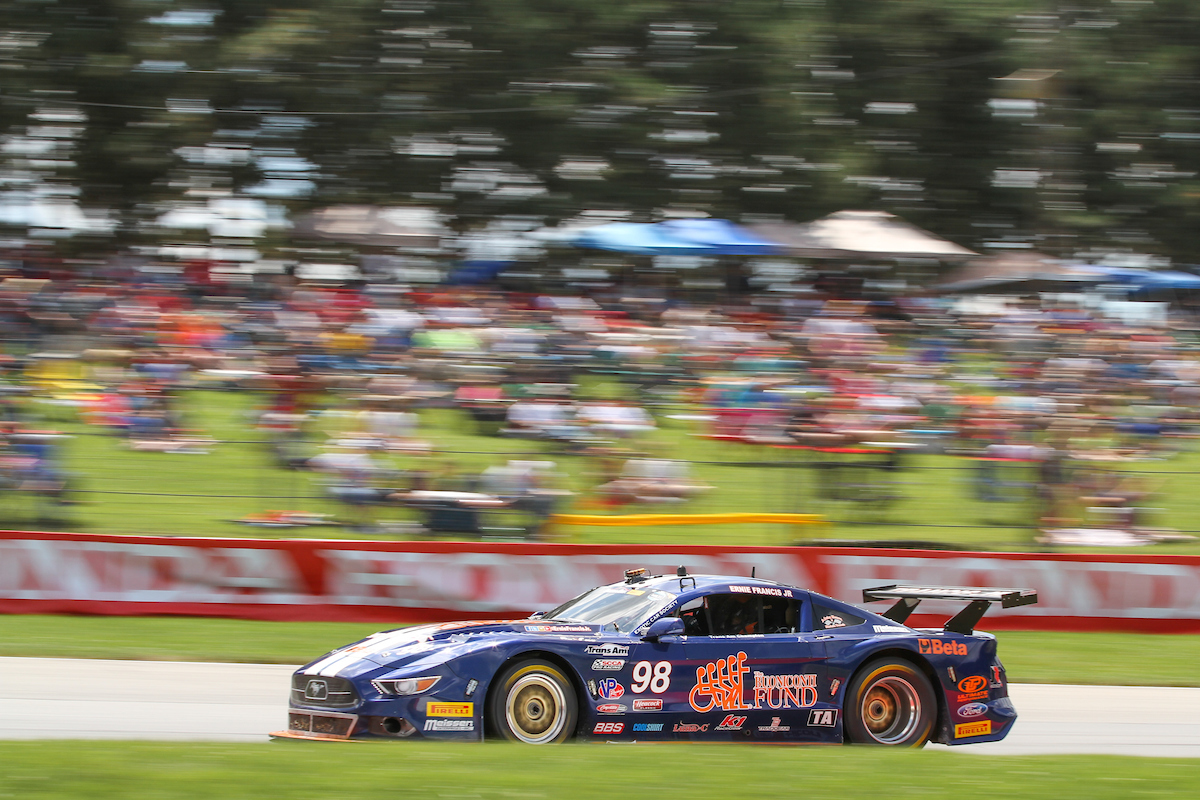 Ten victories in your first year, that’s astounding for anyone moving to any class, never mind stepping from production racing to a tube framed, high horsepower machine like a Trans Am car.  What about your skill set clicked with this platform?

“Yes, it’s skill, but it’s also experience,” said Francis.  “I think a lot of it dates back to go-karts, you learn how to handle a car and throw it around without any help.  That translates to any level of racing—the TA class in particular.  But I took a lot away from racing TA4 cars as well, our Camaro and Mustangs— they have a lot of weight to them.  You learn how to make the tires last; and I feel like that was a huge advantage this year, just tire management.  I know a lot of drivers struggled with it in 2017, but we were able to be consistently quick with the rubber underneath us.”

You’ve started to become somewhat synonymous with the TA class now.  How would you describe the experience of driving a TA car, and what have you learned from that experience?

“A TA car is unlike any car you can drive,” said Francis.  “Nothing has the ability to put power down like it does.  You have to learn to harness it, but you also have to learn to be cautious with the brakes as well—they don’t have a ton of stopping power.  If you can drive a Tans Am car fast, you can drive anything out there.  You won’t find more power; they don’t have traction control, or ABS, and they can be difficult to drive— everything else is a little easier.  Stepping behind the wheel of a TA car… it’s such a unique experience.”

With the season wrapped up what experiences stand out to you above the rest? What were the season’s defining moments for you?

“The first win at Homestead-Miami was a great feeling,” said Francis.  “I think first wins always stick out.  Otherwise, the battles we had this season really stand out.  Racing at Mid-Ohio with Martin Ragginger, who’s absolutely a top notch driver, and battling with Lawrence Loshak at Circuit of The Americas.  The COTA race was an incredible experience and some of the most fun I’ve had in my Trans Am career, making a last lap pass for the lead, going side-by-side for what felt like forever— it’s absolutely one of the best races I’ve had in my Trans Am career.” 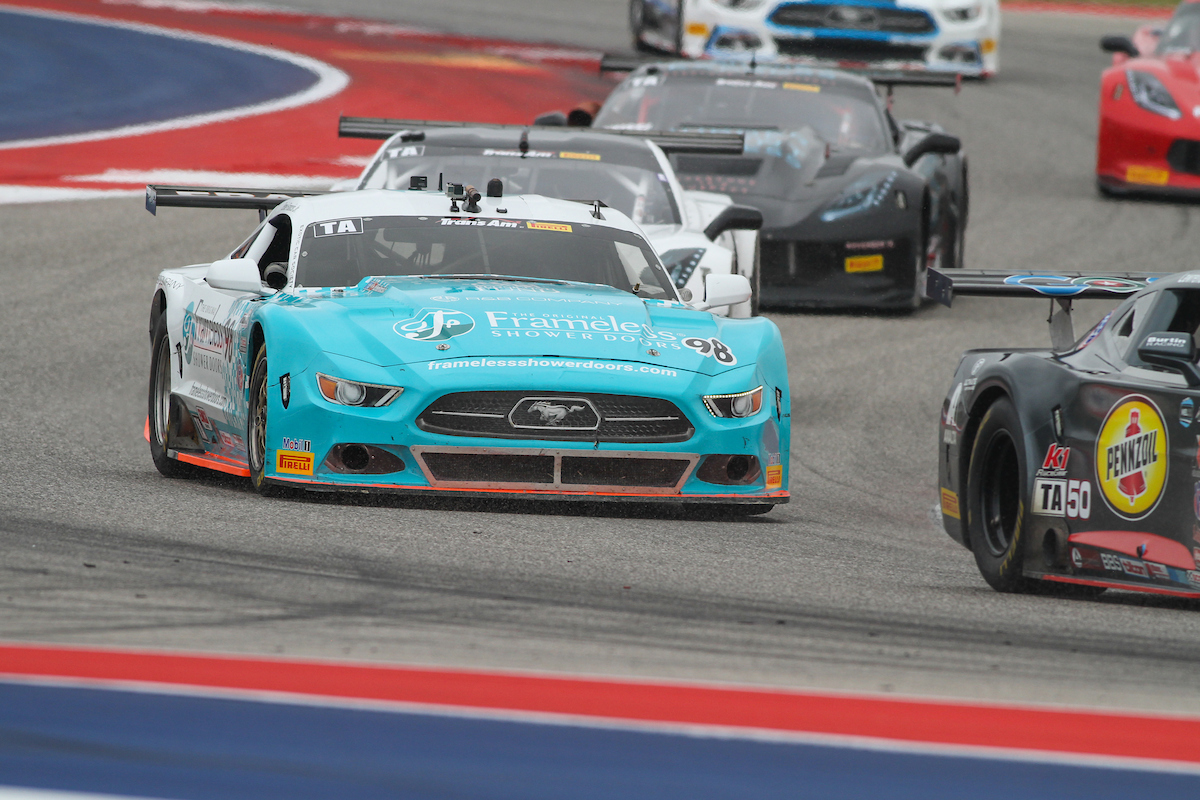 There’s always, and rightfully so, an emphasis on the team— Breathless didn’t necessarily have the largest crew or the biggest budgets, what made this team so good in 2017?

“I think a lot of it played into the passion we have for what we do and our passion for what we wanted to accomplish,” said Francis.  “We had a goal in mind and stuck to it.  When everyone buys in, when everyone puts in the time and puts in the effort— that’s how you win championships.  We took pride in that effort.”

“I also think we set a new standard in the TA class for the use of data and its review.  Everything was always a battle for that next tenth of a second—the laptop was always open trying to figure out how we could go faster, smoother, every track and every corner.  We just kept going back to the data.”

You’re just about the antithesis of arrive and drive.  You’ve been seen with a polish rag and an engine hoist and after standing  on the top step of the podium an hour later standing on the top of the rig breaking down the canopy— you seem to do it all.

“It’s always been that way for me,” said Francis.  “When you’re young, you just want to be involved.  So you help out with everything you can, and I guess that just forms into a habit.   It’s just never seemed right to sit back and watch people repair your mistakes or to just stand around while they work away.  It’s a habit, and it’s one I want to keep.”

It seems like so much has fallen into place towards the end of 2017; what role has your Trans Am championship played in these new opportunities?

“I think Trans Am played a huge part in the events over the past few months,” said Francis.  “Really, I don’t think anything would have happened without it.  Chip was watching us this season and saw us at Detroit and the success we had.  Rev Racing, knowing my way around a tube framed car, it all comes into play.  It’s been a crazy few months, but I’ve never been more excited in my life for the future.”

You’re coming off two very big events in the wake of capturing the Trans Am championship, Rev Racing and a test with Chip Ganassi; what have those experiences been like?

“The Rev Racing test and combine was a really unique experience,” said Francis.  “It was really interesting, especially for me: a road racer with only three oval tests under my belt.  I have a lot to learn in that world, but I’m looking forward to the challenge and the development process that comes with it.”

Who knows where you’ll be in five years or what you’ll be doing; when you look back on your time in Trans Am, what will stand out to you?

“I imagine I’ll think back on the championships we won and the friends that we made along the way.  We’ve come a long way since our first race in Trans Am, competed against a lot of talented drivers and made some great relationships.  Our team has come a long way, and I’ve never been more excited for the future.”

Ernie Francis, Jr., and the entirety of the Trans Am Series presented by Pirelli will return to the track on March 4, 2018 at Sebring International Raceway for Round 1 of the 2018 Trans Am Championship alongside SVRA.