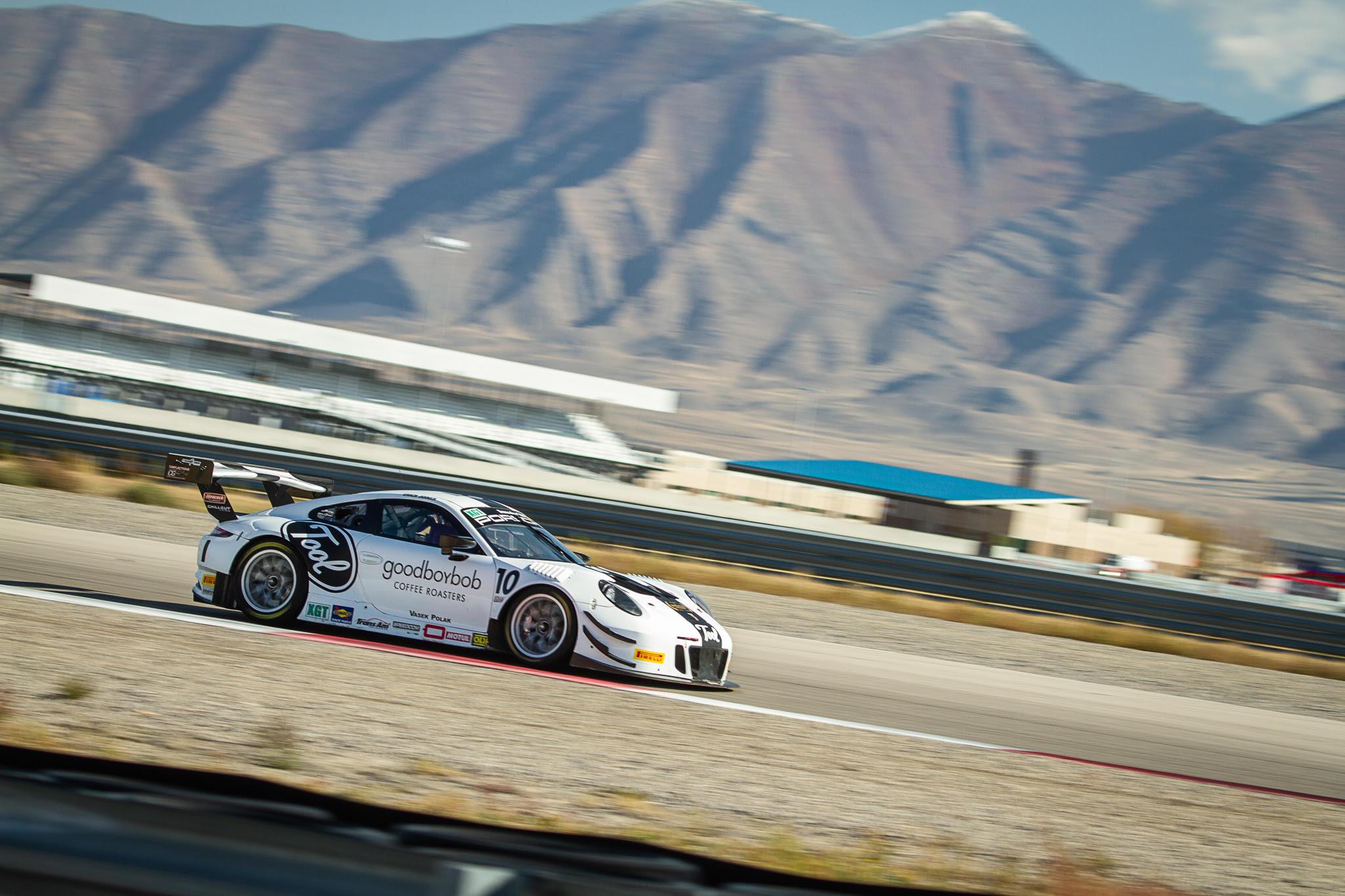 "It was a really fun race, this track is amazing," said Joiner. "It was great to come out here and race again with everyone on the West Coast. I have to say there's a great caliber of drivers out here. Almost everyone here could hold their own in the National Series. It was also the first race I've raced entirely under green flag. I got tired I think I needed a Good Boy Bob espresso shot because I was radioing the crew asking how many more laps! Everyone here did a great job and I look forward to racing at Circuit of The Americas."

Carl Rydquist started on the TA2 pole in the No. 47  Racecars4Rent/GroupWholesale Ford Mustang. Contested at the start by Kent Stacy, Darrell Anderson and Tim Lynn, Rydquist lost the lead, entering Turn 1 on the outside of a three-wide battle.

Stacy pulled ahead in the No. 26  RF Racing/S3/ TTA Chevrolet Camaro to lead the first four laps for the TA2 class before bending his front suspension in the Attitude Section of the 3.048-mile course.

Braking for lapped traffic while trying to mend the gap, Rydquist passed Stacy to retake the lead, bringing a charging Ken Sutherland along with him. Nursing a wounded car, Stacy fell down the running order to eventually finish seventh overall, sixth in class.

Rydquist eventually shook Sutherland to claim his fourth victory of the season by more than seven seconds. 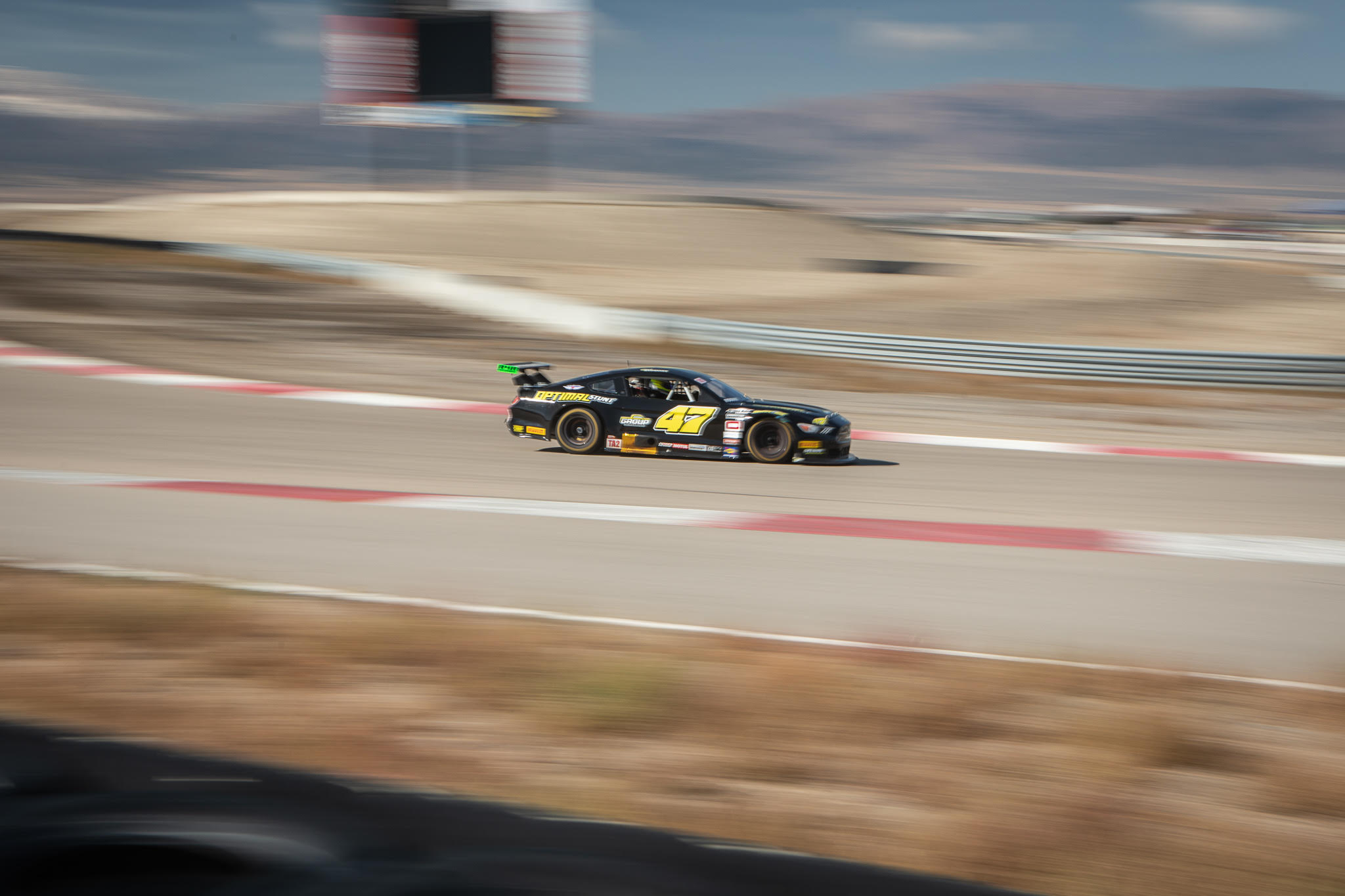 "The year has been amazing," said Rydquist. "Driving the TA2 car is just so fun. I am thankful for the opportunity with Tom Nelson and Nelson Motorsports Team. They have given me a great car from the first day. It felt weird coming in from the SGT car to the TA2 car, but they dialed it in for me. The race today was really awesome. (Kent) Stacy was up there with me and then Ken (Sutherland) came up and made it even more fun. We managed the car and I am really glad to be up here and to have finished the race.  I am looking forward to meeting the National teams at CoTA. I want to work with the other West Coast TA2 drivers to make sure when the National guys come, they have someone to race. "

"It feels surreal being named the TA2 West Coast champion in my first season," Rydquist continued. "I have a list of incremental goals that I wanted to achieve this year, and I think we are a year ahead of schedule."

Sutherland had the drive of the day in the No. 68 Cascade Sotheby's Chevrolet Camaro. Electing to change all four of his Pirelli tires ahead of the race, Sutherland forfeited his second-row start to take the green in 15th position. By Lap 2, Sutherland charged through the field, making up 11 positions. In two more laps, he was challenging Rydquist for first in class. His efforts for the lead faded in the final circuits, but in just his second race with the series, Sutherland took second place, third overall and the ChillOut Moment of the Race. 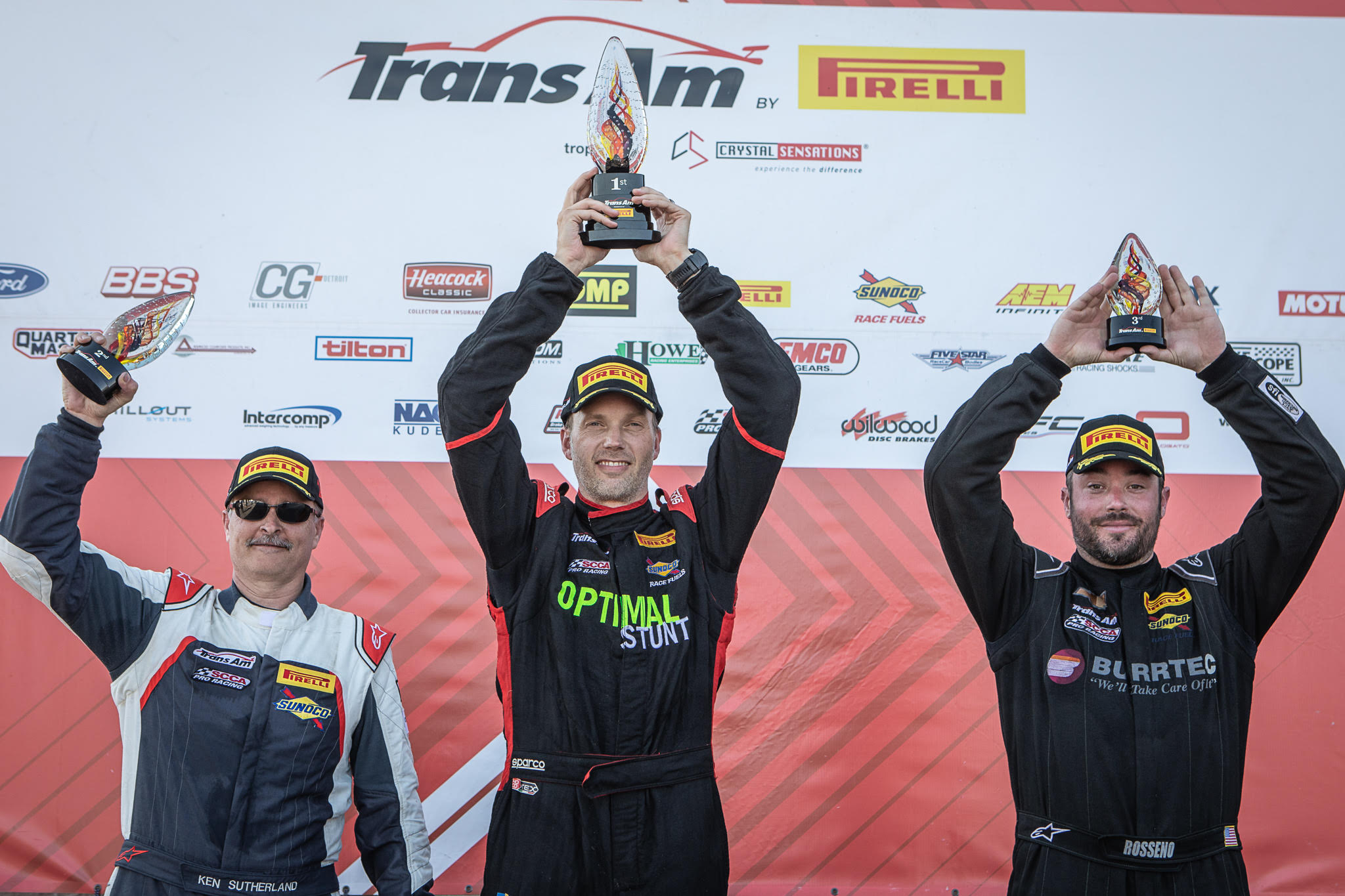 "We had a great car," said Sutherland. "Those Pirellis were great the whole way. I didn't have quite enough for the champ (Rydquist), but this is just our second race and I am very proud of what we've accomplished."

Starting sixth in the No. 03  Burrtec Waste Ind/Amsoil Chevrolet Camaro, Nick Rosseno had spirited battles throughout the 33-lap race. On the start, Rosseno was nearly collected in a Lap 1 incident after Lynn spun in front of Rosseno contesting for the lead in Turn 1. Rosseno had to take evasive action, ditching the car in the grass to miss a pirouetting Lynn. The move lost Rosseno valuable track position and he spent the rest of the race playing catch up.

Rosseno's hardest battle was against Anderson's No. 45  Park Place Constructors Chevrolet Camaro. The pair diced around the race track for nine laps with Anderson holding off Rosseno's several attempts to advance. Rosseno eventually wore down Anderson to take the final TA2 podium position, finishing third in class and fourth overall.

"I had a heck of a time today," admitted Rosseno. "We had some good hard battles today. It was a lot of fun racing against Darrell (Anderson) and that's what it's all about."

Anderson went on to finish fourth in class, fifth overall, with Brad McAllister in the No. 24 www.PortlandImplantDentisry.com Ford Mustang rounding out the top five in TA2 (sixth overall) one lap down. 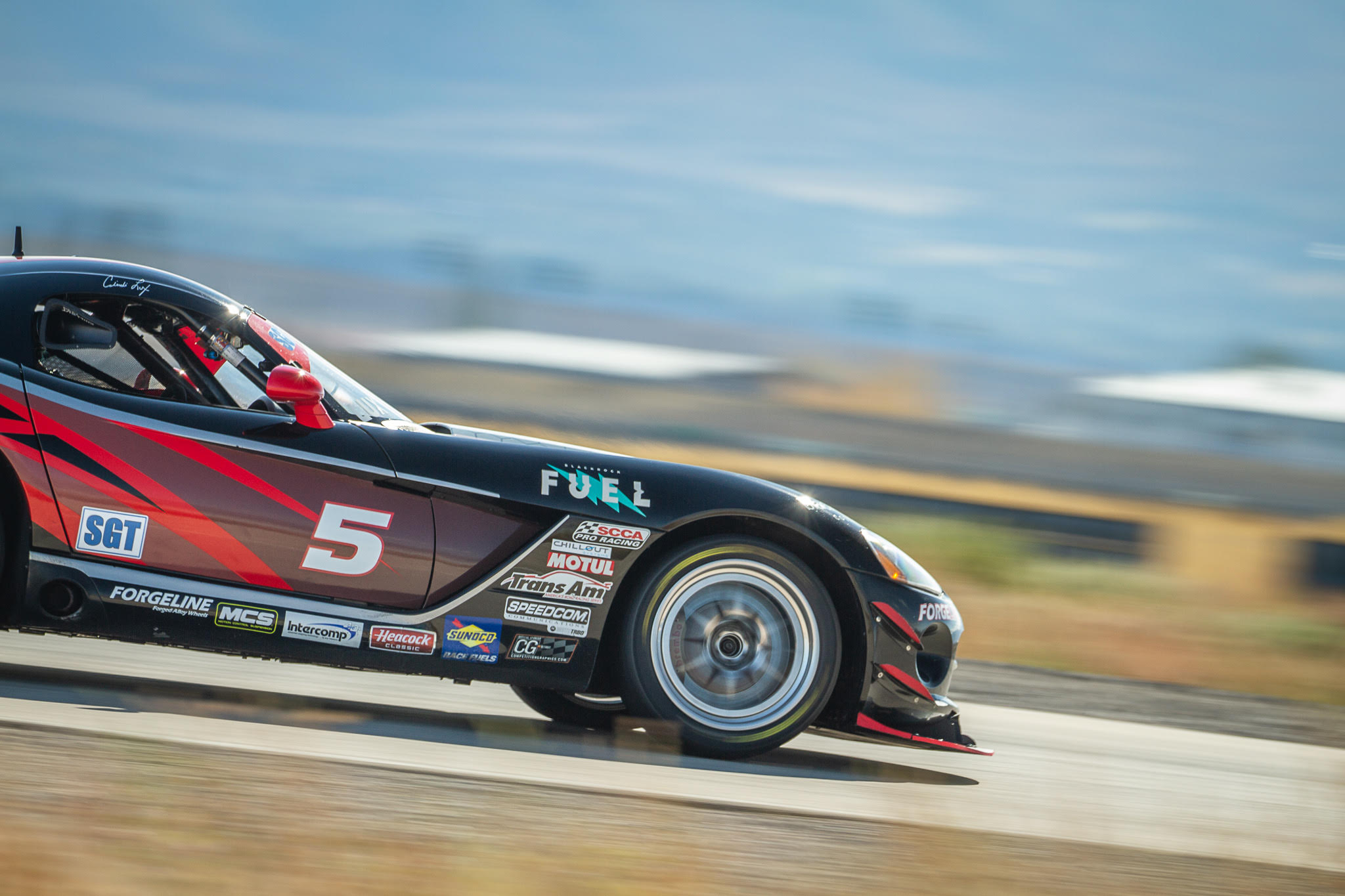 Cindi Lux used her decade of experience racing at Utah to finish first in the SGT class after losing her gearbox and the clutch with 10 laps to go. She finished the race using one gear, winning her third consecutive West Coast SGT race in the No. 5 Lux Performance/Black Rock Coffee Dodge Viper.

"It's always good to back in Utah," Lux said. "It's a fun race track to get into a rhythm. I cruised home on those last 10 laps though, running with one gear the whole time. It was a nice day and I look forward to CoTA."

Though Lux won the class race, it was John Schweitzer who clinched the SGT championship today with a second-place finish. The rookie class driver got his racing experience road racing with SCCA. In his first professional season with Trans Am, Schweitzer has earned four podiums and a class victory in the No. 00  Superior Builders Inc Ford Fusion.

"We went out and did exactly what we set out to do today," said Schweitzer. "My lap times got better as the race went, and we stayed on course to finish. I am very happy with our performance today.

"What an incredible experience this season has been," continued Schweitzer. “When we set our sights on the SGT Championship we knew it was going to be a huge push up from club racing. We are a small team running out of the Pacific Northwest so meeting the challenges of stepping up to pro racing has been a bit stressful but also exciting. 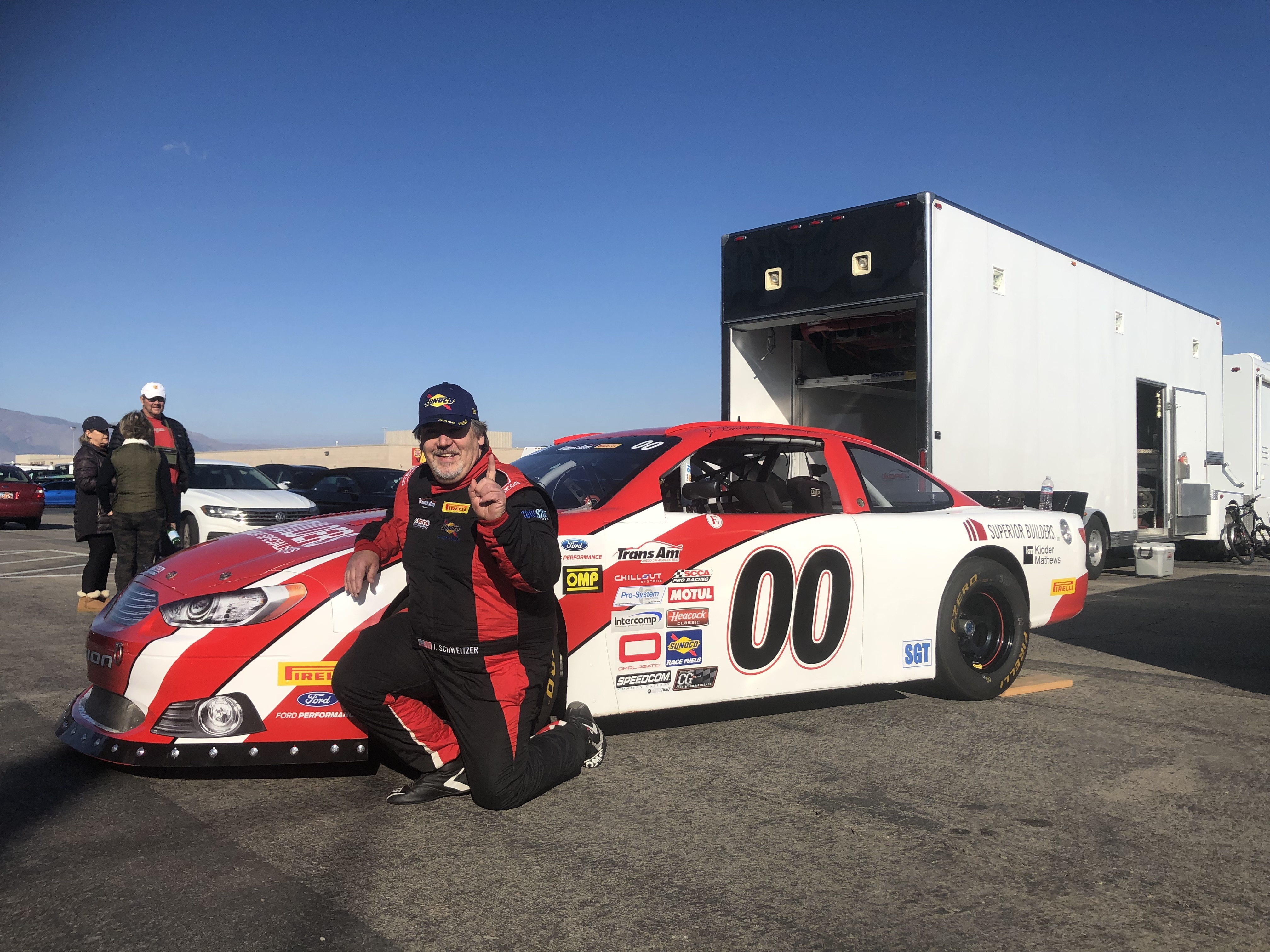 “One of the things I didn’t anticipate was the camaraderie amongst the competitors and teams, which has really amplified the experience in a positive way. I’d like to also express sincere appreciation to the Trans Am Staff and Officials. We made our share of mistakes in our rookie season and the support we received was exemplary. Our team is looking forward to the final round at CoTA and celebrating our success at the 2021 Honors Gala!”