LEXINGTON, Ohio (27 June 2021) – With high heat, multiple restarts, a front to back charge to the field that came to naught, and a recovery drive to the podium from a championship contender, the Trans Am presented by Pirelli visit to Mid-Ohio Sports Car Course had a little bit of everything on Sunday.

Chris Dyson took the lead shortly after the midway point and pulled away to record his third Trans Am Series presented by Pirelli victory of the season at Mid-Ohio. 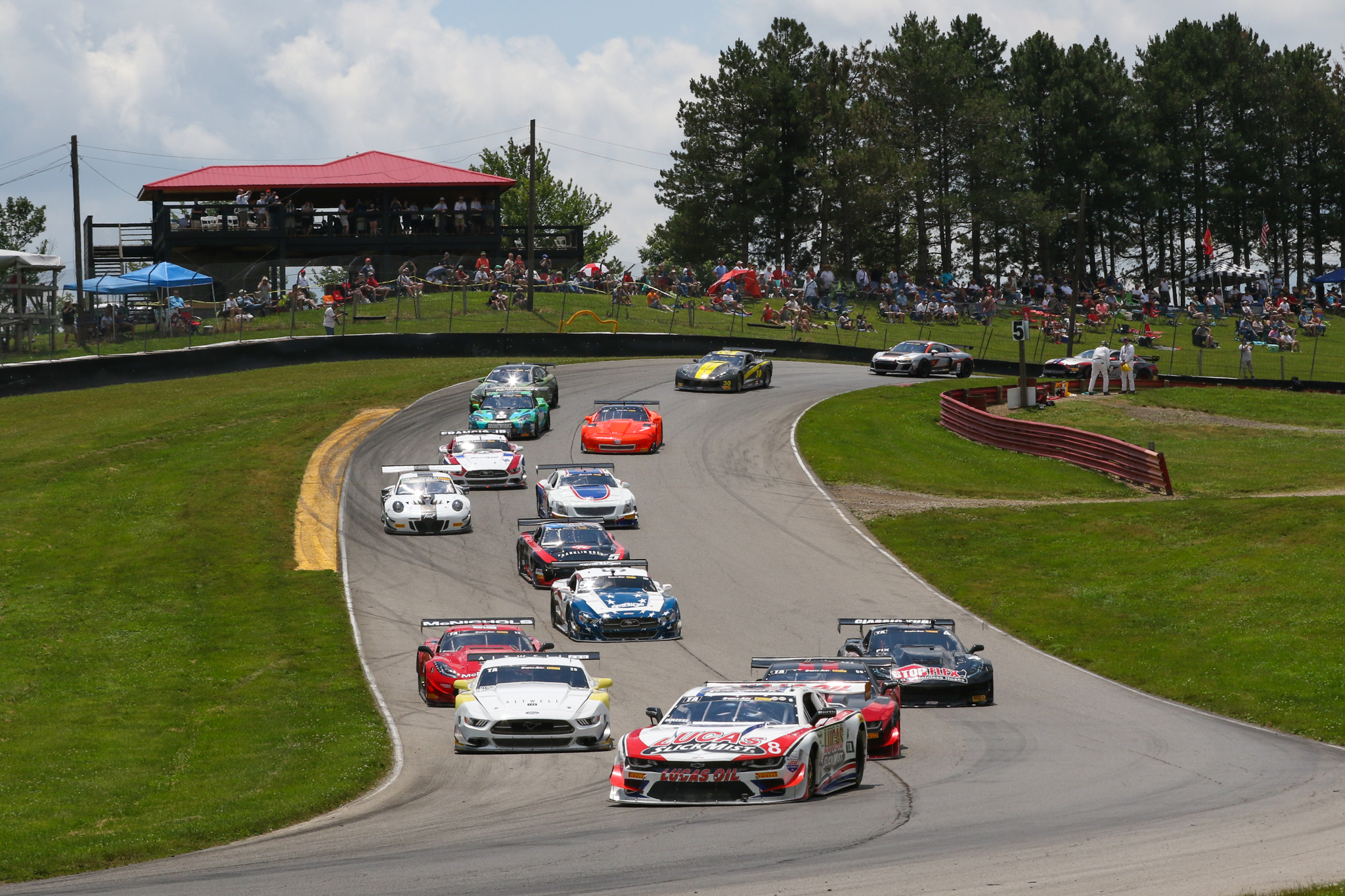 The New Yorker was visibly upset after qualifying third on Saturday in the No. 20 ALTWELL CBD Ford Mustang. Sunday, he chased pole winner Tomy Drissi from the start while holding off back-of-the-grid starter Ernie Francis Jr.  But on lap 25, Francis went through the grass and needed to pit, with Dyson getting by Drissi at start/finish to take the lead. And that was all she wrote, with Dyson leading the rest of the way for the ninth Trans Am victory of his career, building his lead in the standings.

“I couldn’t be happier, we really turned it around after yesterday,” Dyson said. “I knew we had a pole car, and we just didn’t get to show it yesterday. We showed it today. I had some great battles out there. Great, clean racing with Ernie early on, and it’s always an absolute battle to go up against Drissi. It was hot; it was physical; and we had some beasts to tame here. But that’s what Trans Am racing is all about.”

Drissi finished second after seeming to be driving a ticking time bomb throughout the race. Fire came from the rear of the No. 8 Lucas Oil Chevrolet Camaro on lap 3; the fire went out, but nine laps later he reported a mushy gearbox; shortly afterwards, he reportedly lost his taillights.

It was the third podium finish of the season for Drissi, who was the winner at Laguna Seca.

"First my rear deck lid caught fire, and I was about to pull in for the team to extinguish it, but it went out," explained Drissi. "Then traffic caught me in the Carousel. I couldn't go wide, otherwise I would hit (Chris) Dyson. That put me about three or four seconds behind, so after that, it was just maintaining pace so we could secure second."

However, Drissi lost out in the drama department to Francis Jr. The 23-year-old saw his seven-year-old Mid-Ohio winning streak come to an end, but not for want of trying. Missing qualifying due to his SRX commitment at Eldora, Francis Jr. started at the tail end of the 20-car grid in the No. 98 Future Star Racing Ford Mustang. Up to seventh on lap 1, Francis needed only an additional three circuits to catch Drissi and Dyson. On lap 23, Drissi went wide in the Carrousel, with Dyson and Francis going off briefly; Francis went through the grass, necessitating a pit stop to clear his grill. 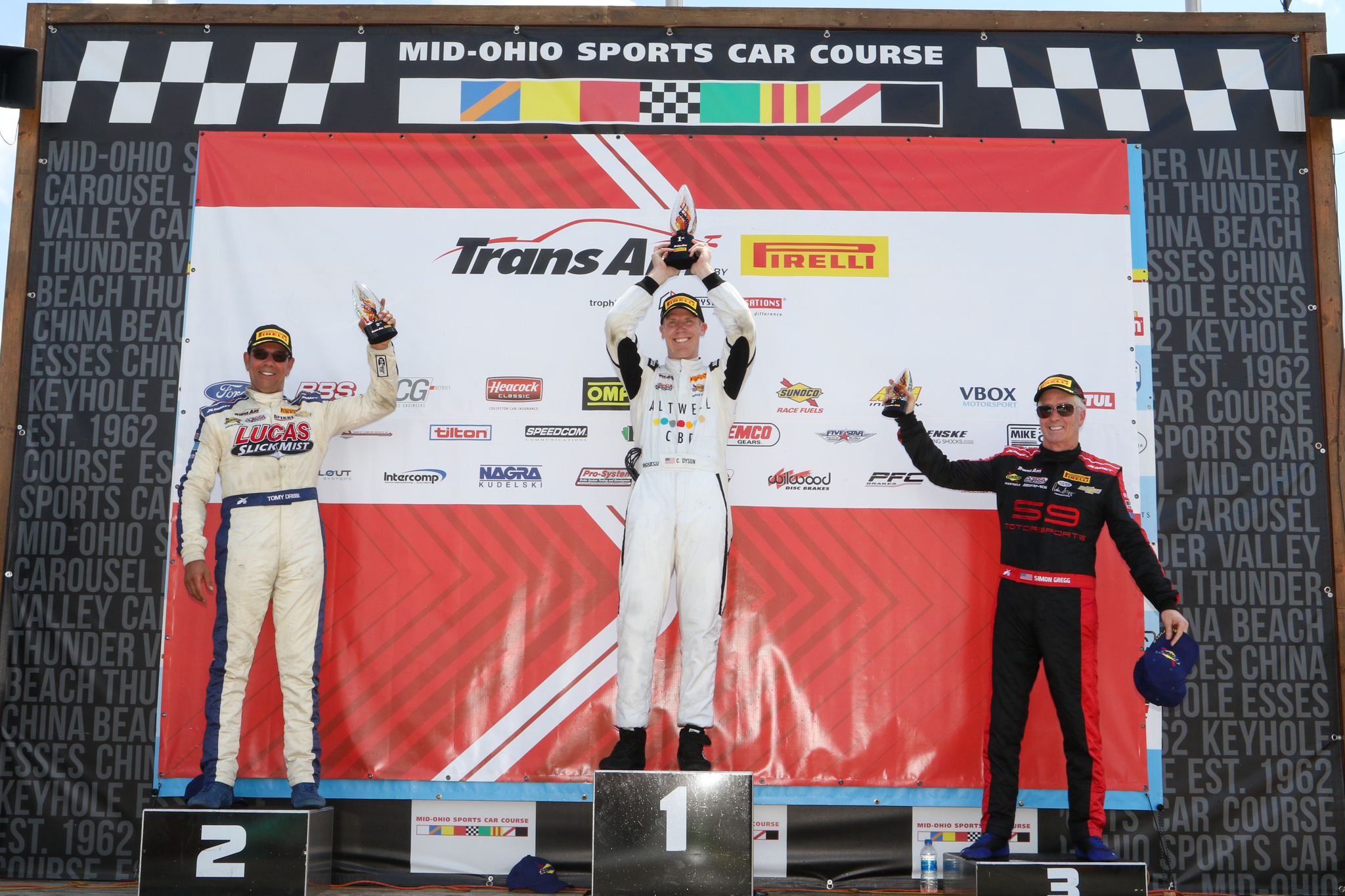 Back on track, Francis was seventh, 40-seconds behind Dyson – who had just taken the lead from Drissi. He came back to challenge Simon Gregg for third. Suddenly, with six minutes remaining, Francis lost his gearing and pulled off, bringing out a race-ending caution flag. He finished ninth in TA.

"We got a really strong vibration in the car," said Breathless Racing Team Owner Ernie Francis Sr. "And we lost all forward gears. We are going to keep pushing hard. This team never quits. We always do the best we can, and we are going to come back strong for Road America."

Gregg placed third in the No. 59 Peter Gregg Foundation Camaro, completing a solid weekend that saw him qualify second – nearly winning the pole. It was the 34th podium in a career that dates back to 1997, and first since Brainerd last season.

“The race was fun but very hot with all the restarts,” said Gregg. “Glad to be back on the podium representing Burtin Racing.”

"I couldn't be happier with our finish today," said Ruman, who resides in Stow. "I wish we had a chance at the restart at the end but we had a really good start. I passed three cars at the start, fell right in and I was with the lead pack. Unfortunately, our grip fell off a little bit so we faded. We made headway back and worked back to fourth. I am just happy that we had a good solid finish. That's just what we needed in front of our hometown crowd." 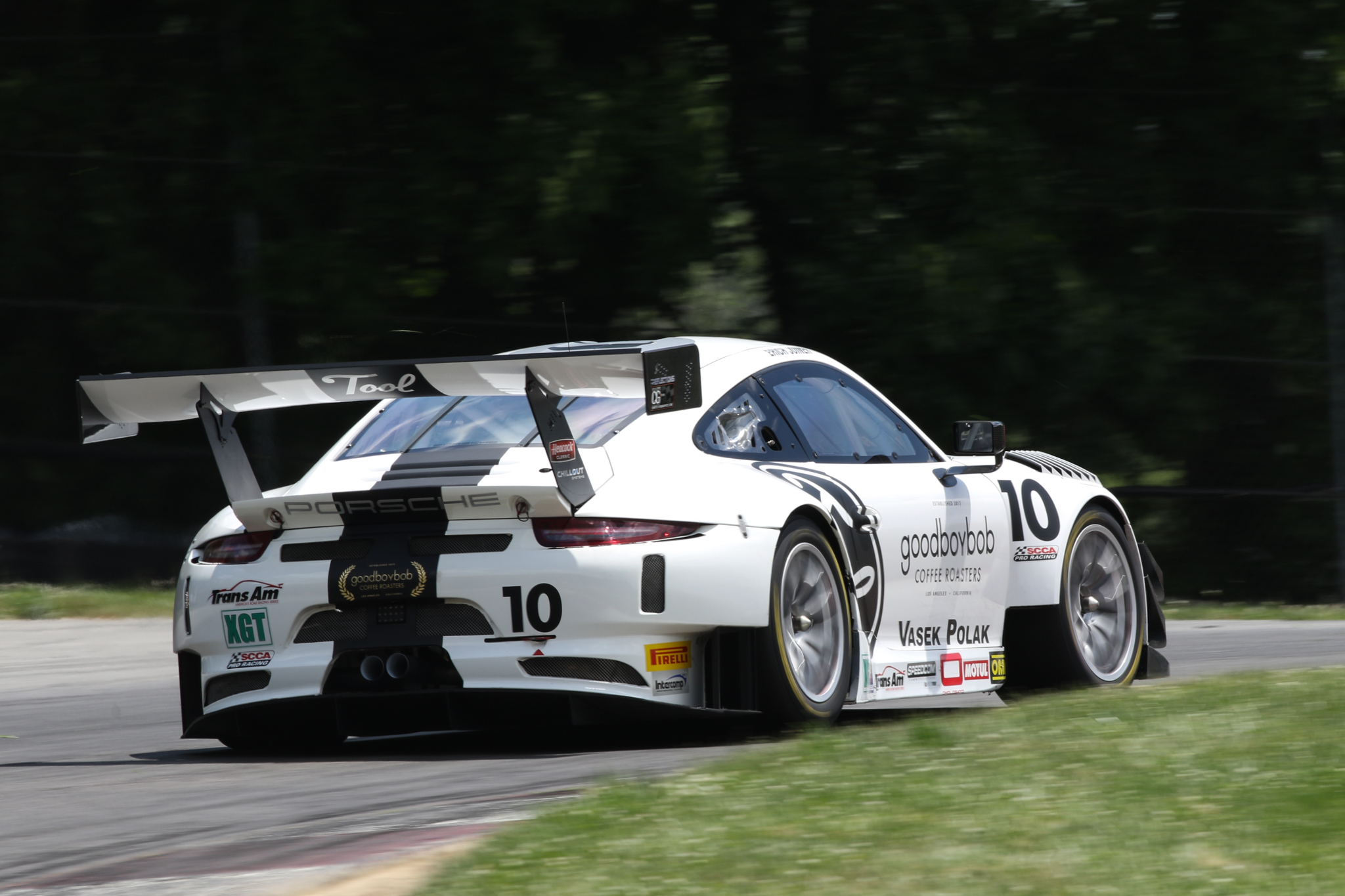 The first of two cautions waved on lap 8 when Ken Thwaits lost his brakes in Turn 4 and went through the gravel on China Beach, impacting the wall with the front end of his No. 5 Franklin Road Apparel Camaro.

Erich Joiner led all the way for his third-consecutive XGT victory, the sixth of his career. Driving the No. 10 Good Boy Bob Coffee Roaster Porsche 991 GT3 R., he found himself battling the TA class drivers throughout the event, starting and finishing fifth overall.

“At the green flag, every one of the TA cars that I out-qualified went by me,” Joiner said. “It felt like I was swimming with sharks. It seemed I had to start setting up a pass in Turn 4 all the way back in the Carrousel. They have so much horsepower, and those things will bite you. Scary, but it was really fun. I had a great race with Amy. She’s a world-class driver and she didn’t make any mistakes.”

Justin Oakes won his third race of the season in SGT, and fourth of his career, leading all the way in the No. 11 Droneworks Corvette.

“The race was great, and the car performed perfectly,” Joiner said. “I had a blast. We put a pretty big gap on second place, and then we went into preserve mode to save the car for next week. This was my first time at Mid-Ohio, and it was like a big roller-coaster. I loved it!” 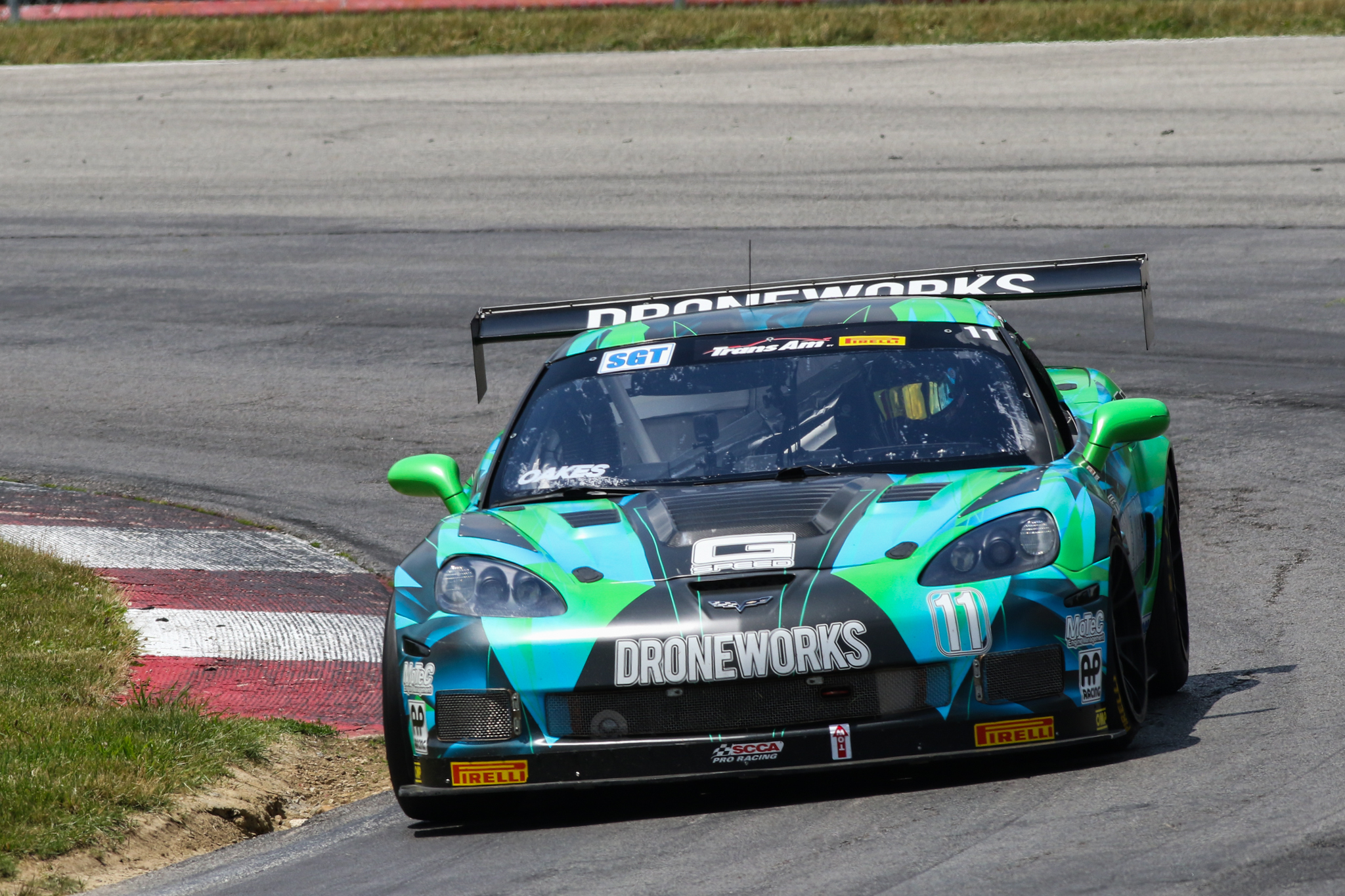 "I was a little intimidated today, it was my first Trans Am race, and honestly I got a bit anxious," Lucas admitted. "My whole family was here to support me. My goal is to race in Trans Am full time because this is the place to be for American Road Racing.”

While Lucas completed his first Trans Am race today on the other end of the spectrum was SGT Masters Class Winner Milton Grant who marked a Trans Am career milestone today with his 500th motorsport career start, 47th start for Trans Am.

Next weekend, the Trans Am Series with Pirelli continues at Road America to support the NASCAR Cup Series. For event information visit www.GoTransAm.com.