Dyson Prevails in Torrid Scrap with Francis Jr. for Trans Am Pole at WeatherTech Raceway

Joiner, Oakes and Crocker top in class at Laguna Seca

Dyson turned a lap of 1:24.510-seconds in the No. 20 ATWELL CBD Ford Mustang, breaking Francis Jr.’s two-year old Trans Am Series presented by Pirelli track record on a day highlighted by wide swings of weather, ending in a cool mist.

"We've found a car that works in all weather conditions, and honestly it might just be the magic of ATWELL CBD giving us an extra boost out West," said Dyson, who captured his seventh career pole. "We are so lucky to be out here on the West Coast. We had a great week at Sonoma last week, and to be here at Laguna Seca is always a thrill. With our special new ATWELL CBD livery we will go for a second weekend flag-to-flag."

Francis Jr. held the pole midway through the session, also breaking his own mark with a lap of 1:24.677-seconds in the No. 98 Future Star Racing Ford Mustang. He got caught in traffic while making a late run at Dyson.

"Chris (Dyson) breaking my record is what it is, but we will be quick tomorrow when it counts," Francis Jr. said. "I think we will have an awesome race with Chris tomorrow, and we will get that record back in the race.

"Qualifying was close but not exactly what we wanted out there today," added Francis. "The team put together a really fast car, we've been pretty quick all weekend, we just got out there and thought we put a pole lap together but ran into some lapped traffic. It's disappointing that we didn't put down the lap we wanted to."

Tomy Drissi and Boris Said will be in striking distance starting from the second row in the 100-lap race. Drissi ran 1:25.076-seconds in the No. 8 Lucas Oil Chevrolet Camaro, just ahead of Said’s 1:25.346-seconds in Pancho Weaver’s No. 2 Technique/SRI Dodge Challenger.

Justin Marks, who held the fast lap early in the session, wound up fifth, 1:25.711-seconds in the No. 99 Ave Motorsports Corvette.

The lone West Coast Championship entrant in TA, Steve Goldman was the West Coast pole winner, 1:36.729-seconds in the No. 13 LIG Racing Corvette.

"All of a sudden the fog rolled in and the track got a little bit slower compared to where we were in practice this afternoon," explained Joiner. "The track was not as grippy but fortunately this is considered my home track, and I've logged a lot of hours here. Good Boy Bob Coffee definitely made me go extra fast, it's a great little perk and pleasure to have around the track. We feel like we are in a good position for the race tomorrow."

Justin Oakes took his second SGT pole in two 2021 starts – and fourth in four races dating back to the 2020 finale. Oakes, who missed the Road Atlanta race to witness the birth of his first child, ran 1:31.400-seconds in the No. 11 Droneworks Corvette, breaking the track record by five seconds.

"We came from Texas and it was quite a long haul out here," Oakes said. "This is my first time racing in California and my first time ever at Laguna Seca. The racing with the West Coast drivers has been great. This place is amazing, I love it and I will be back for sure. My son Jackson is three weeks old now, and he’s home with my wife Elaine and are both doing great."

Lou Gigliotti was second in SGT in the No. 28 G2 Motorsports Park Corvette. 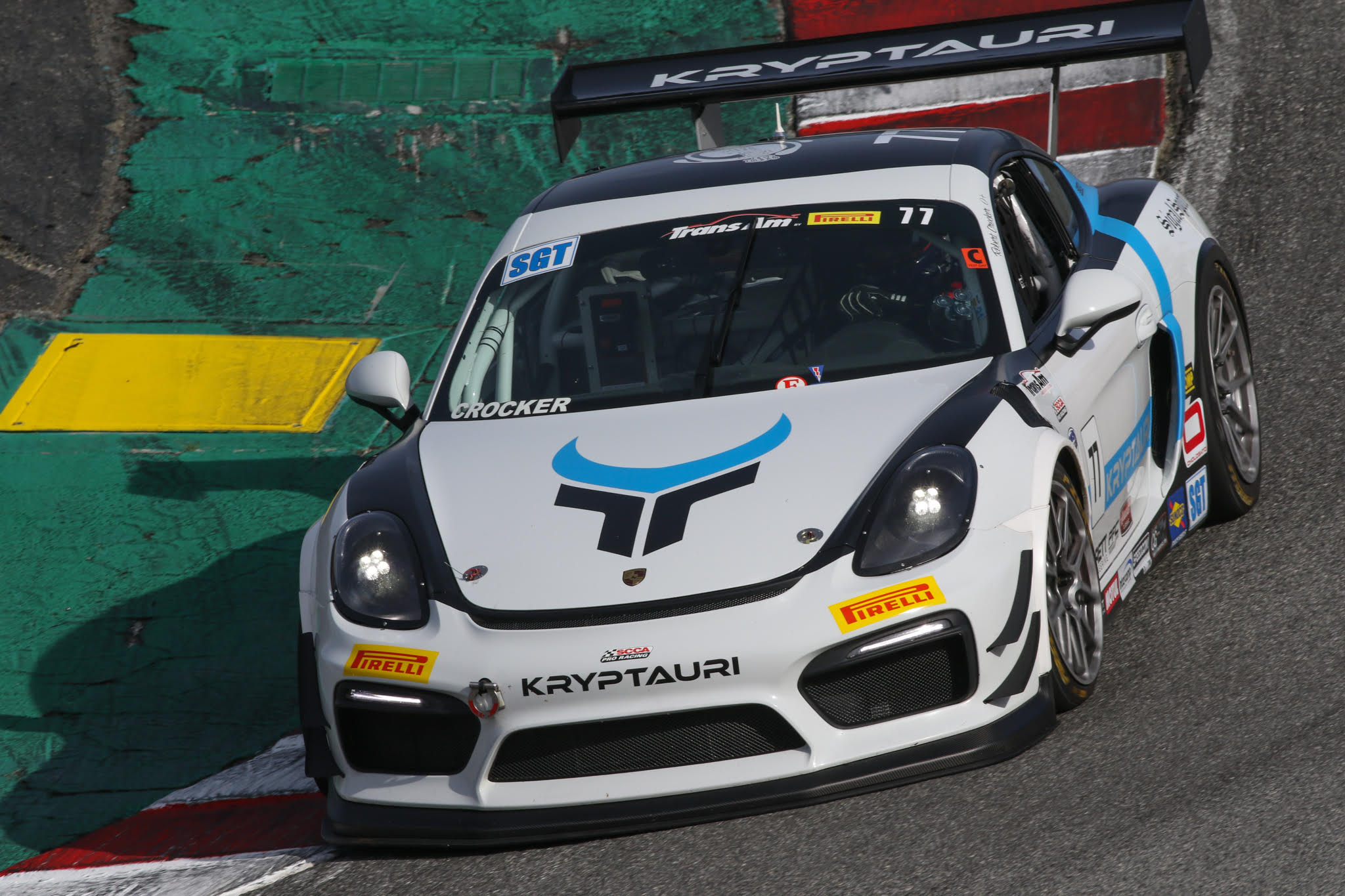 Rob Crocker was the West Coast SGT pole winner, third overall with a time of 1:33.792-seconds in the No. 77 KRYPTAURI Cybersecurity Porsche Cayman. Crocker's transmission lost fourth gear at Sonoma last weekend, and then it went completely out. He obtained a new transmission, and installed it with the help of John Schweitzer and his team to make this weekend’s race.

"Unfortunately it got colder and a bit overcast today about 30 minutes before qualifying," said Crocker. "It was kind of like Sonoma where the track conditions really dropped but it got a lot trickier this time around to get some heat into the tires. We kind of played with the setup a little bit to try and compromise that at the last minute, but instead that ended up putting us about a half step back backwards."