WATKINS GLEN, N.Y. (12 September 2021)- Leaving nothing to chance, Chris Dyson pulled away from the field to win another spectacular Trans Am Series presented by Pirelli race on Sunday to complete a doubleheader weekend of combined-class racing at Watkins Glen International. (VIDEO: TA Race Highlights) 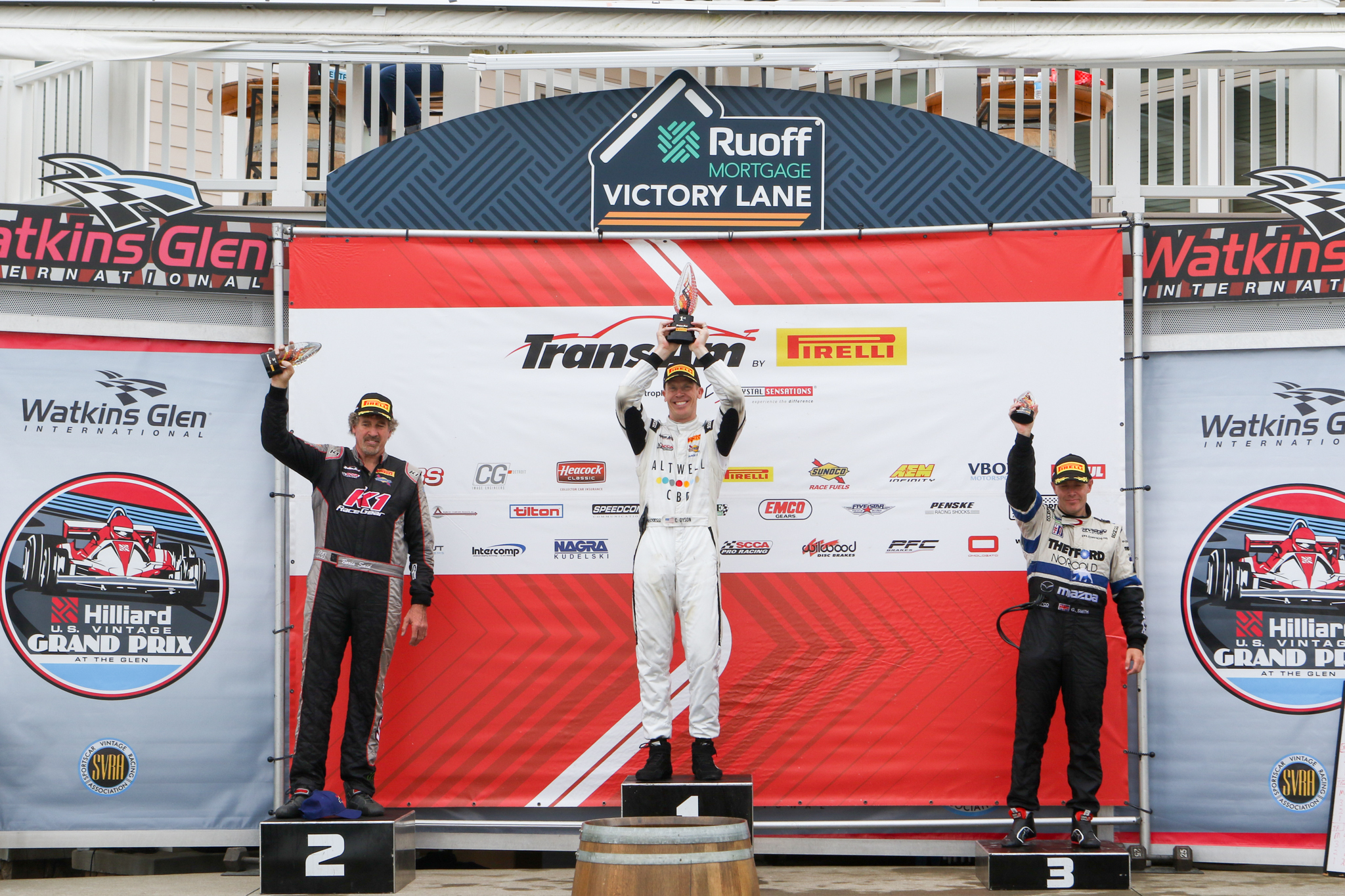 “God bless the empire state, God bless New York, I am so proud to be back here,” said Dyson, who made his professional debut at The Glen 20 years ago.  “It was just magnificent up here today. We made some tweaks overnight, and it worked out fantastically for us today. The ALTWELL CBD Ford Mustang feels so good and was fast every single lap. I could push; I could drive into a pace; we definitely had our hand in it today the whole way. I’m really proud we got a one-three finish for the team, so that’s terrific for the points. To win two in a row here at Watkins Glen is very satisfying for us.”

Dyson saw troubles take out challengers Ernie Francis Jr. and Tomy Drissi. After going out with clutch problems in the closing laps of Saturday’s run, Francis dropped a belt and later overheated in the No. 98 Future Star Racing Ford Mustang but was able to take the checkered flag two laps down after having led in the early stages of the race.

Dyson had battled with Drissi on Saturday, and the two were once again in close contention on Sunday as Drissi challenged Dyson up until sustaining tire and suspension problems exiting Turn 4, sending him into the guardrail.

Said started the No. 2 Pancho Weaver Technique/SRI Dodge Challenger from the back of the 34-car grid after missing Saturday’s race. He thrilled his many fans in the large crowd by storming into contention, but had nothing for Dyson following the final restart. Said won the Chill Out move of the race for coming from last to second. 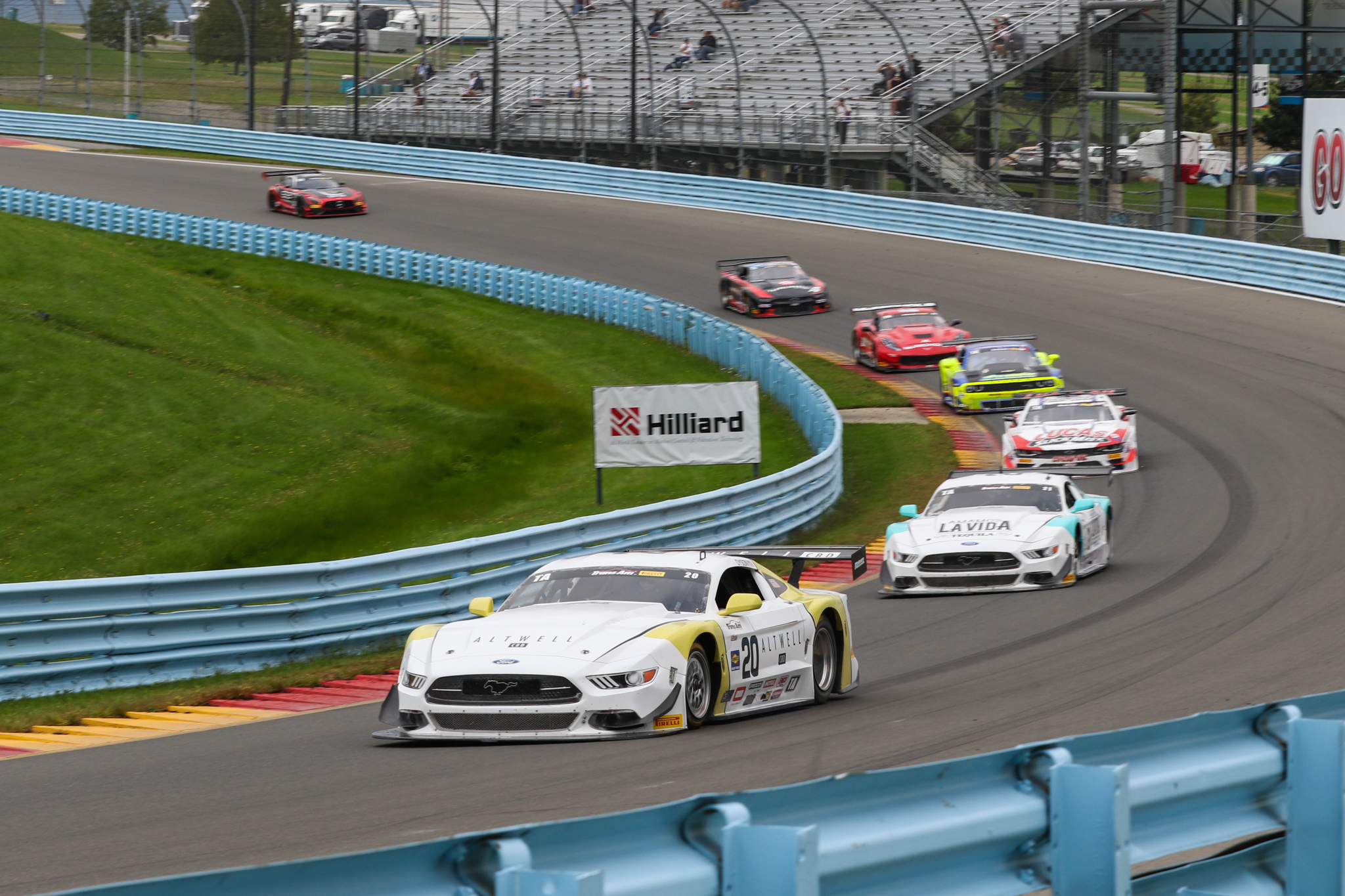 "I love coming here, it's like my home track," Said explained. "Of all the tracks I've raced from all over the world, this circuit is badass and the best I've ever driven. I had a blast coming from the back, I wanted Chris (Dyson) really bad, he's a good blocker. I tried to put the fender on him but didn't want to rough him up too much to upset him and his championship. He won today fair and square. Pancho Weaver builds the best cars, and I had a lot of fun today driving from the back.”

The run to the Trans Am podium was a welcome one for Smith, who celebrated his birthday in style.

“I actually went into neutral, I was so busy trying to keep her back, I wasn’t even looking at what I was doing,” Smith admitted about his late race battle with Ruman. “It was a bit of a comeback. She drove really, really well, and was super late on the brakes.. This Trans Am racing is just crazy. It’s a lot of fun, the racing is first class, and we put on a good show for everybody.”

Ken Thwaits took fourth in the No. 4 Franklin Road Apparel Camaro, and was the TA Masters winner.

Following the caution for Drissi, the Lap 21 restart generated a major incident in the Esses that turned around the TA2® race.

Up until that point, Connor Mosack had dominated the class in the No. 92 Nik Taylor/IFS M1-SLR/Fields Chevrolet Camaro, and the Team SLR driver got away on a clean restart. Behind him, though, cars began spinning – including three of the cars dueling for second. Mike Skeen, Misha Goikhberg and Thomas Merrill all spun into the wall; Saturday winner Rafa Matos missed the wreck but fell from third to seventh while avoiding the incident; and Tyler Kicera managed to sneak through without damage and advanced to second in the class. (VIDEO: TA2 Race Highlights)

After a black flag to clean up the incident, Mosack went on to win by 0.883-seconds ahead of Kicera for his first TA2® victory.

“It feels amazing,” Mosack said. “Team SLR gave me a great car – it was the best car all weekend. It’s a big relief; it takes a lot off my shoulders to finally get my first win. I feel there’s more to come the rest of the year. Hopefully, we can get it done again at VIR. I saw the wreck behind me, and it took out some of the good guys. But I knew we still had some good guys behind us, and I had to hold them off there at the end. It definitely wasn’t an easy race, but as the laps went on, the car got better, and that helped us out.

Kicera came through the incident unscathed to take second in the No. 5 Silver Hare Racing Ford Mustang. The Pennsylvanian considers WGI his home track, making his racing debut there 10 years ago.

“The seas parted, and I drove through,” said Kicera. "It's been a really long weekend. "We've battled uphill the whole time. Huge thanks to Silver Hare Racing for all their help getting the car put back together twice this weekend. I don't know how I made it through that crash, but I did, and tried to give Connor (Mosack) everything at the end there. I thought I might have had him on the restart, but Rafa (Matos) was coming, and I just went into defense mode to try and maintain second. It was a fun race and great result for us."

Matos fought back to take third in the No. 88 3-Dimensional Services Group Ford Mustang. 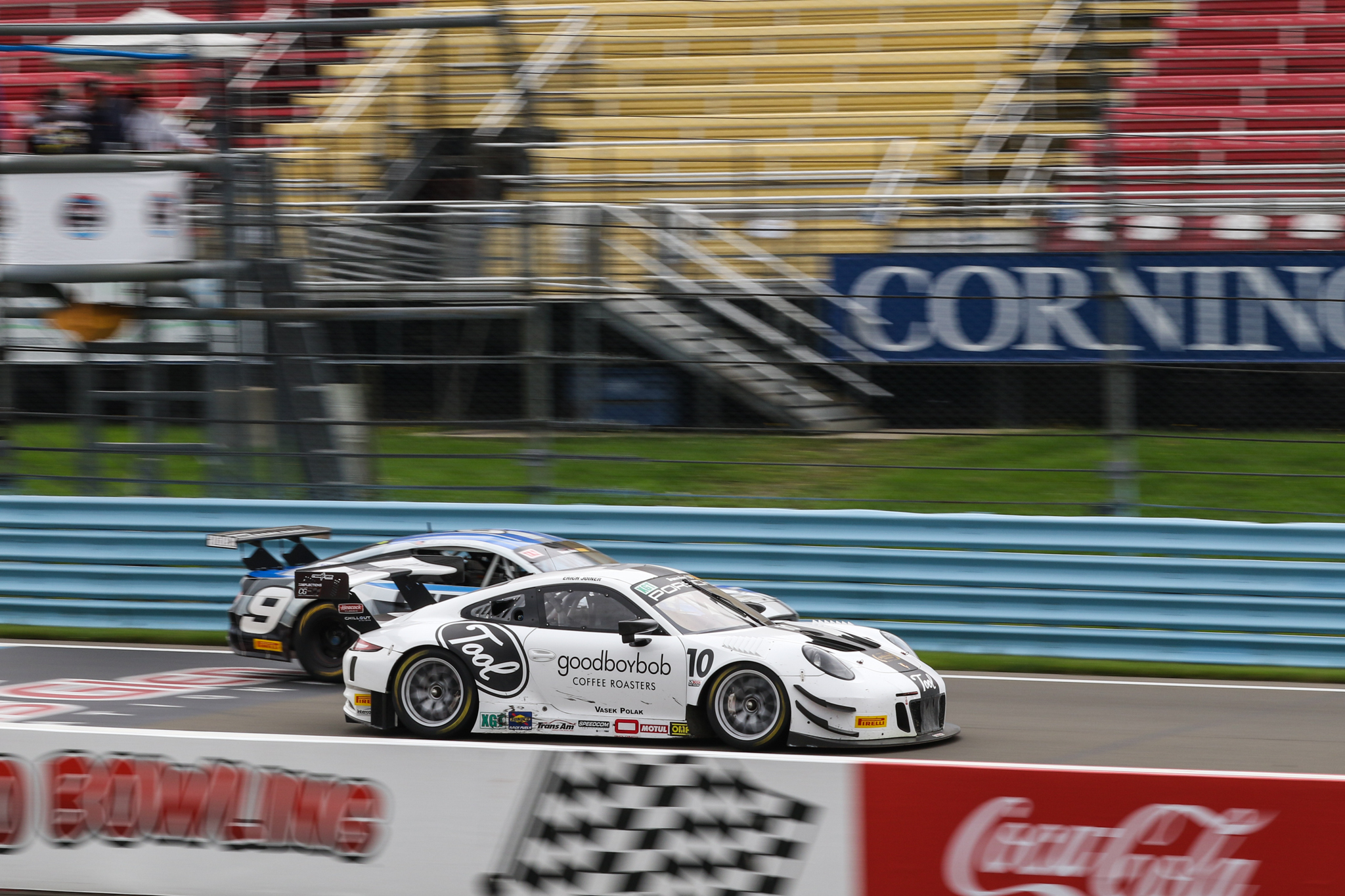 "Today was a day to just finish and get the points," said Matos, who extended his lead in the TA2® title chase. "We were able to avoid the crash, going up the Esses that was a big wreck, I had to go through the grass and my grill was full of grass.  I am really happy with where we finished today, and hope to clinch the championship in Virginia."

Erich Joiner placed 10th overall after leading all the way in XGT, unofficially clinching the title in the No. 10 Good Boy Bob Coffee Roaster Porsche 991 GT3 R. He was challenged by the late addition of Simon Gregg to the class.

"The first few laps I was asking my crew, 'where's Simon (Gregg) where's Simon?'" explained Joiner. "He's a world class driver and he got me in Sonoma earlier this year so I was worried about him! It was a huge race, and I made it through that wreck, thankfully. We had a good time out there and put on a great show for the fans here camping and those watching from home."

With his TA class Camaro unable to race, Simon Gregg unloaded his spare car, a Mercedes AMG he occasionally runs in Trans Am West and now uses as a show car to promote the Peter Gregg Foundation in tribute to his father, a three-time Trans Am winner at Watkins Glen.

SGT also saw an unofficial title clinch, with Justin Oakes winning his sixth race of the year in the No. 11 Droneworks Corvette.

"I have an amazing team from GSpeed," Oaks said. "My coach Jason Heart is incredible at getting me up to speed fast and getting me comfortable with the tracks. It's my first year in the series, it's a brand new car, so I had a lot of learning to do. We've done a great job together as a team. Again, I had great competitors to race against. It was really fun going against Natalie (Decker) there at the end. I just couldn't be happier." 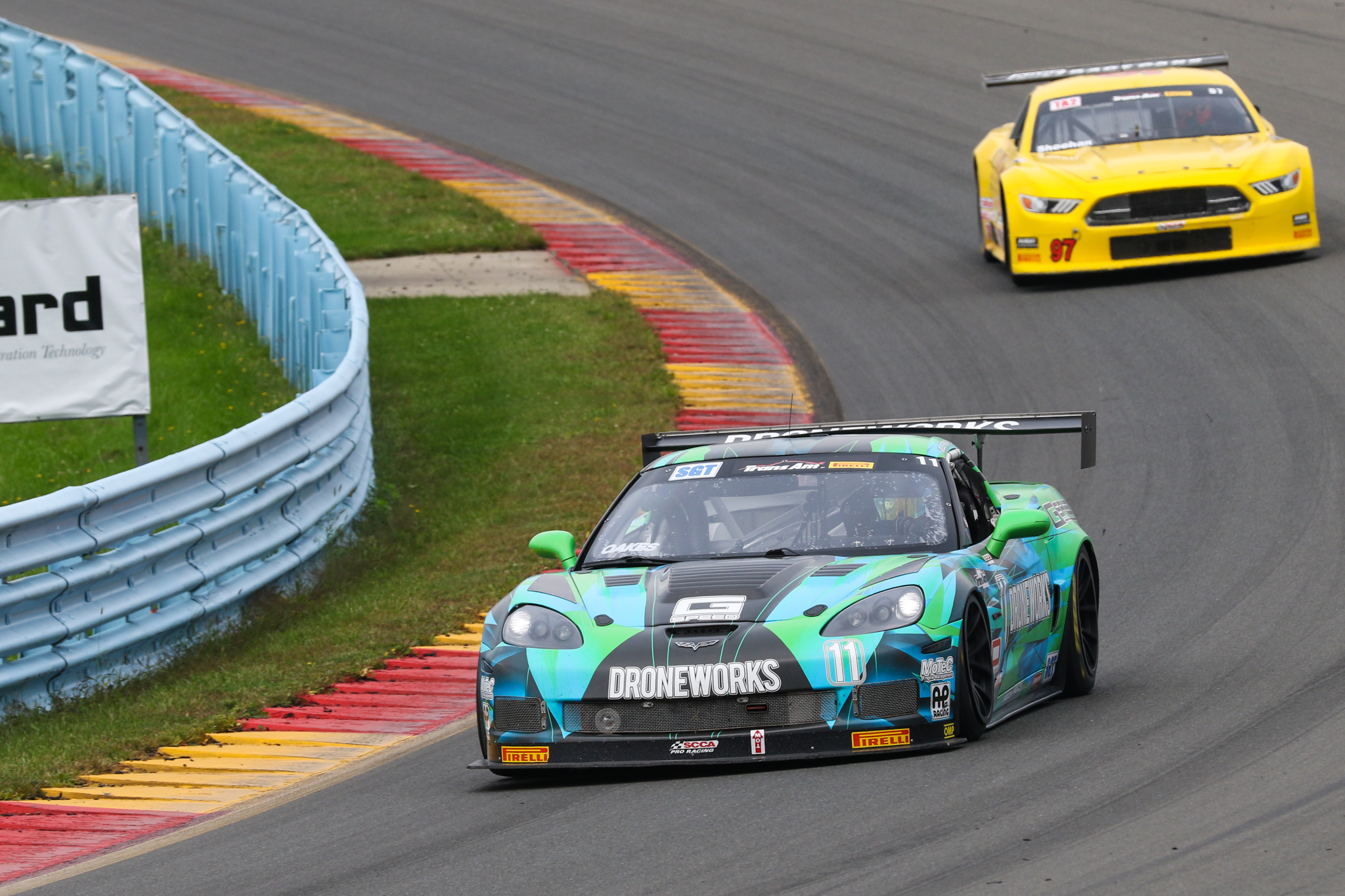 Oakes survived a late challenge from Natalie Decker, who came up only 0.720-seconds shy in the No. 29 NI29 Technologies Audi R8.

"It's a dream to be racing here," Decker said. "I've been wanting to come here since I was a little girl. Thank you so much to Tony Ave. I love his team, he has the best crew. It was great to put WiscLift and Nerd Focus on the podium with a second-place finish."

Milton Grant finished third in the SGT class and first in the SGT Masters Class.

Next up for the Trans Am Series presented by Pirelli is a visit to Virginia International Raceway on Sunday, Sept. 26. The campaign concludes at the Circuit of The Americas on Sunday, Nov. 7.