Lee Saunders returns to winning ways in SGT at VIR

Driving the No. 20 ALTWELL CBD Ford Mustang, Dyson took his seventh victory of the season and 13th of his career to take an insurmountable lead into the season finale. Dyson earned the ChillOut Moment of the Race for his moves holding off Ernie Francis Jr. for the win.

"That race was amazing, and being named champion hasn't set in yet, but I do know it's a profound relief," said Dyson. "We were able to stay up front, and just dominate, that's the way to win it.

"I am just honored to be in the series," continued Dyson. "This is one of the most historic, prestigious road racing series in North America, it has world-wide recognition and seasoned, superb competition out there. These are the fastest, most badass cars, and I just want to thank God for my chance to race. To add this to my other championship, and to become a Trans Am champion is a dream come true. I hope my dad is proud of me."

Boris Said took second, 30.137 -seconds behind in the No. 2 Weaver Racing/Technique/SRI Dodge Challenger.

"We just didn't have anything for the top guys today," explained a defeated Said. "Pancho (Weaver) usually builds a great car, but today we just had some issues with the back of the car, maybe the suspension. But, this track, no matter where you're at, is a blast to drive, especially this car. It wasn't that fun to come in second, I really wanted to beat Chris (Dyson), but I guess second is OK."

Third went to Ken Thwaits, who finished one lap down in the No. 5 Franklin Road Apparel Chevrolet Camaro. The 2020 XGT champ, Thwaits was also the Masters winner and stood on the overall TA podium for the first time.

Alone at the end, Dyson had plenty of pressure for the opening 20 laps.

Tomy Drissi ran second behind Dyson in the early laps before making a series of four pit stops in the No. 8 Lucas Oil Camaro as Burtin Racing attempted to fix an aerodynamic issue. On the fourth stop, Drissi stepped out of the car, ending his title hopes. 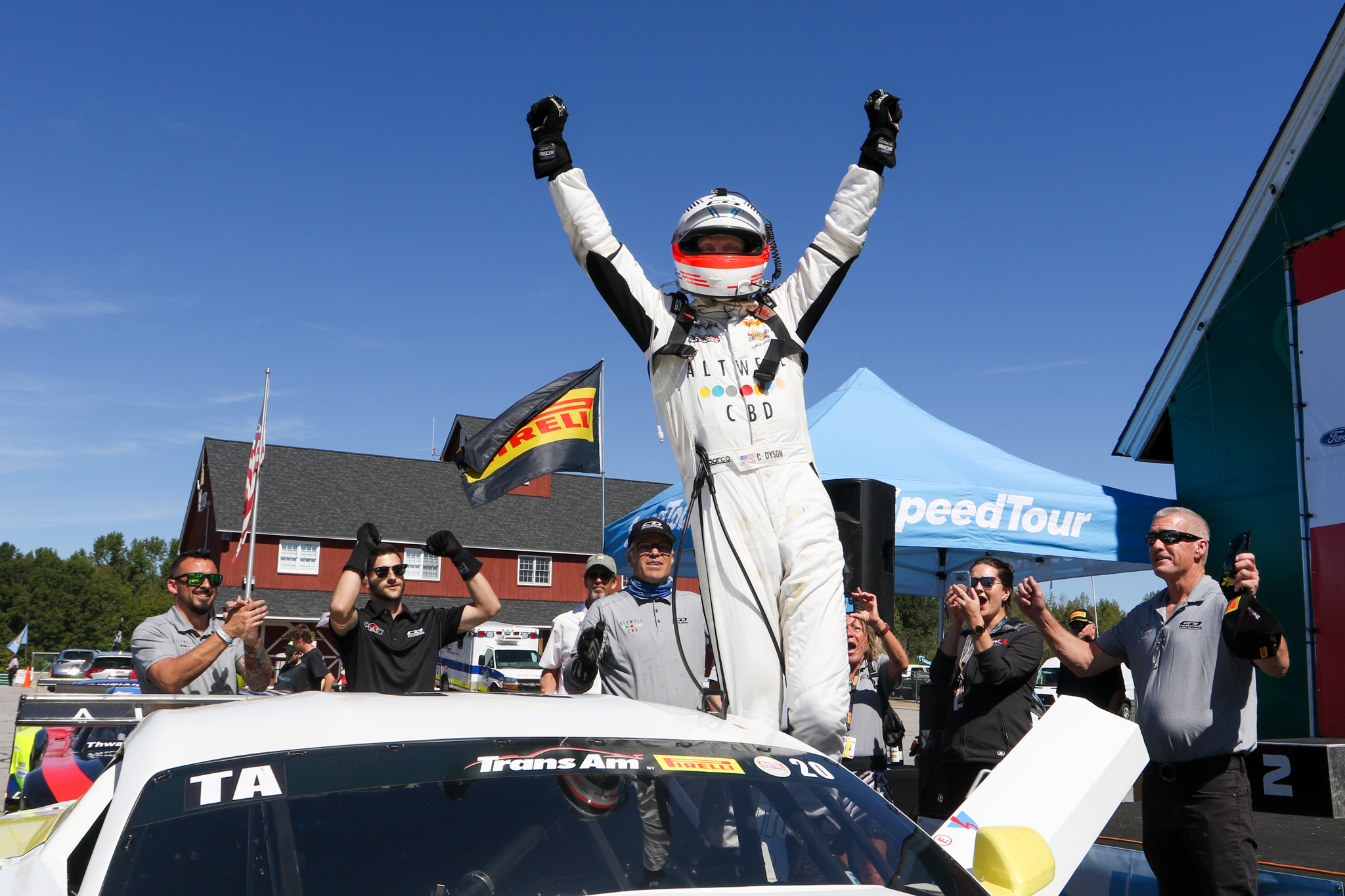 “I know we had the car to battle with (Chris) Dyson today,” said Drissi, who entered the race 46 points in arrears. “We’ve just been fighting this aerodynamic problem with the front end. We’re always pushing aerodynamics, and they worked until midnight last night trying to fix it. It was a problem in qualifying, but we usually get it right for the race. Yesterday it shook like crazy, but we thought we had it right. It felt right at the start of the race, I almost got into Dyson at the old Oak Tree. But we’ve had tough luck this season, some monumental failures.”

Moments after Drissi got out, fourth-place Simon Gregg pulled off at the back pits, his race over in the No. 59 Peter Gregg Foundation Chevrolet Camaro.

At that point, Francis Jr.  took up the fight in the No. 98 Future Star Racing Ford Mustang, pulling to within a half-second of Dyson for the next dozen laps. Then, on Lap 21, Dyson checked up to avoid a lapped car and Francis Jr. hit the rear of the ALTWELL CBD Mustang. Francis Jr. slowed and went to the pits. He retired with loss of his power steering cooler and crash damage, his bid for an eighth-consecutive Trans Am title officially over.

“Ernie was biding his time behind Chris,” said Ernie Francis Sr. “Coming up to some lapped traffic, someone was not watching what they were doing in front of Chris. Chris locked up his brakes, and Junior had nowhere to go and got into Chris.” 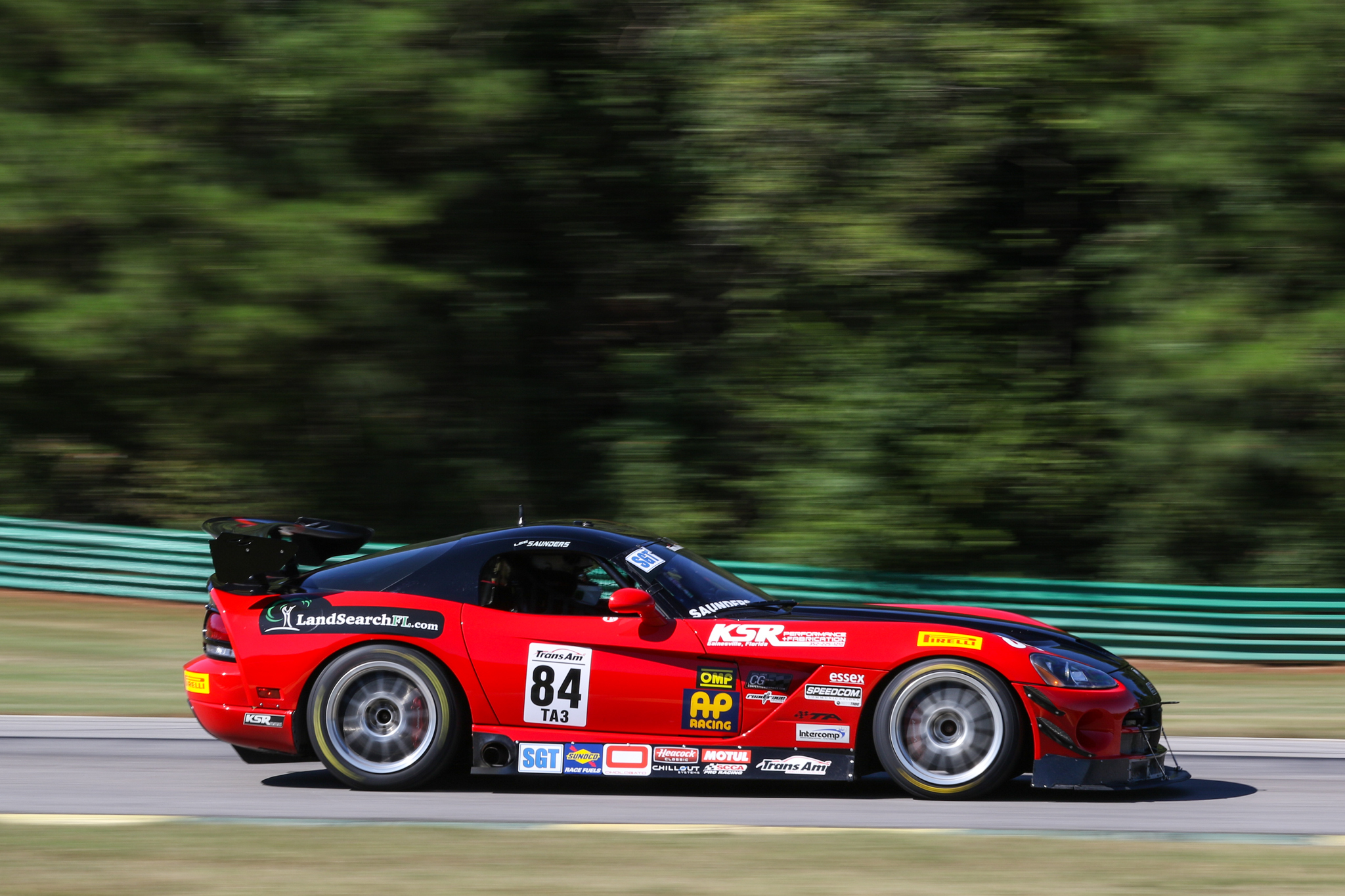 The event went yellow on the fourth lap and would stay that way for five laps when Matthew Butson went off in the No. 24 Ave Motorsports Corvette in Turn 8.

Running for the fourth time this season, 2020 SGT champion Lee Saunders took his first victory of the year in the No. 84 Landsearch LLC Dodge Viper. Paul Fix, making his SGT debut in the No. 29 Ave Motorsports Audi R8, took the lead on the second lap. Saunders returned the favor in Turn 1 on the Lap 9 restart, going to the inside and taking the lead he held for the remainder of the event.

"It's fantastic to be back," said Saunders. "What a beautiful day, we couldn't ask for anything better. It was awesome to see the mix out there. I had some great battles with Paul (Fix), and Milton (Grant) put it into high gear and was flying today. It was a lot of fun to be back."

It was Milton’s third-consecutive podium, and the third time in his career that he finished second. He was also the Masters winner.

"I am shocked, the crew told me I finished fifth overall, and that was unbelievable," said Milton. "I was just out there digging away. I want to thank Jesus Christ for this beautiful day for racing." 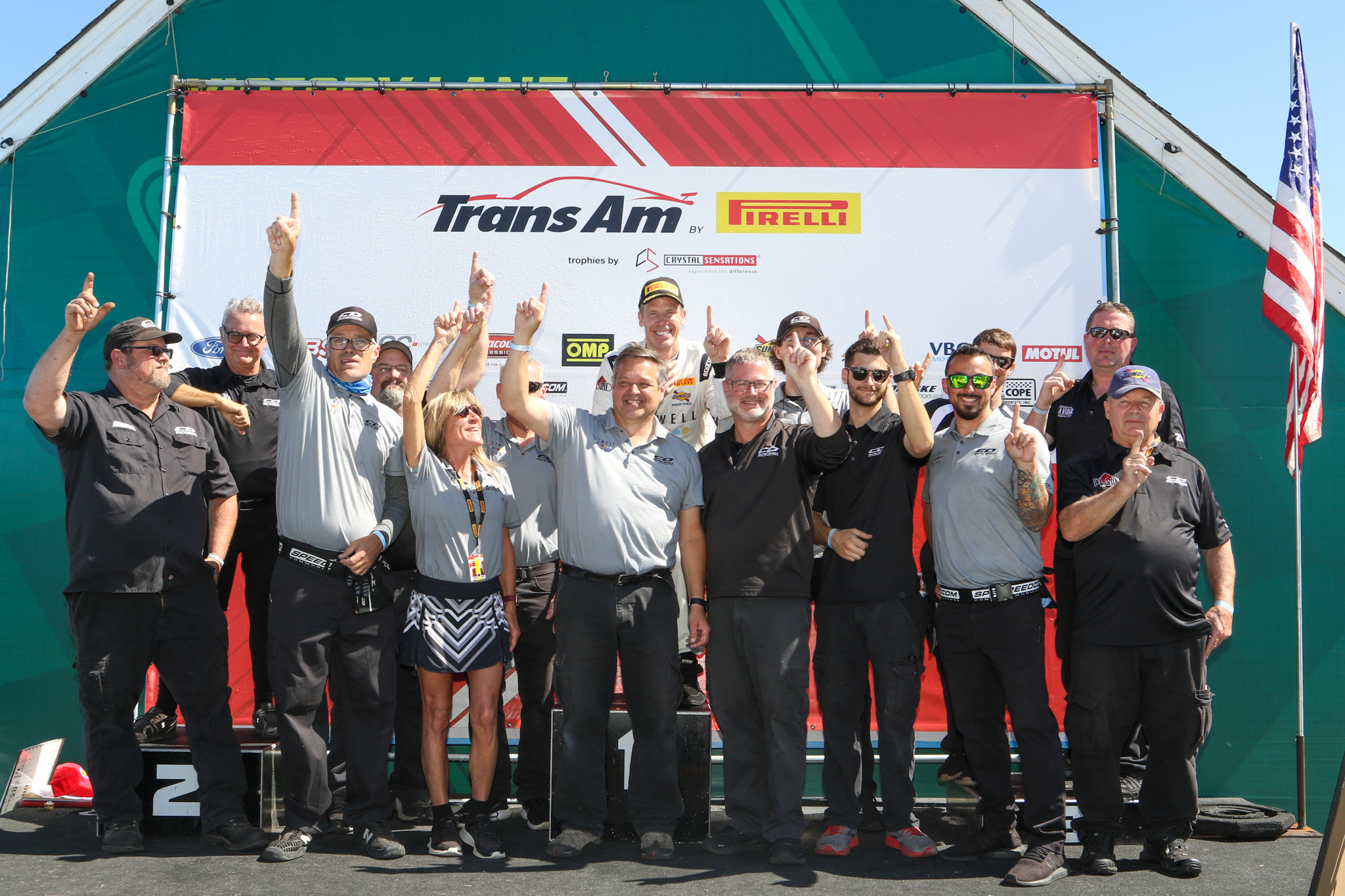 The VIR weekend concludes with the TA2® race at 3:35 p.m. ET. The final races of the National 2021 campaign will be at Austin’s Circuit of The Americas on Nov. 5-7. The Trans Am Series presented by Pirelli West Coast Championship will hold its penultimate round at Utah Motorsports Campus Oct. 8-10.