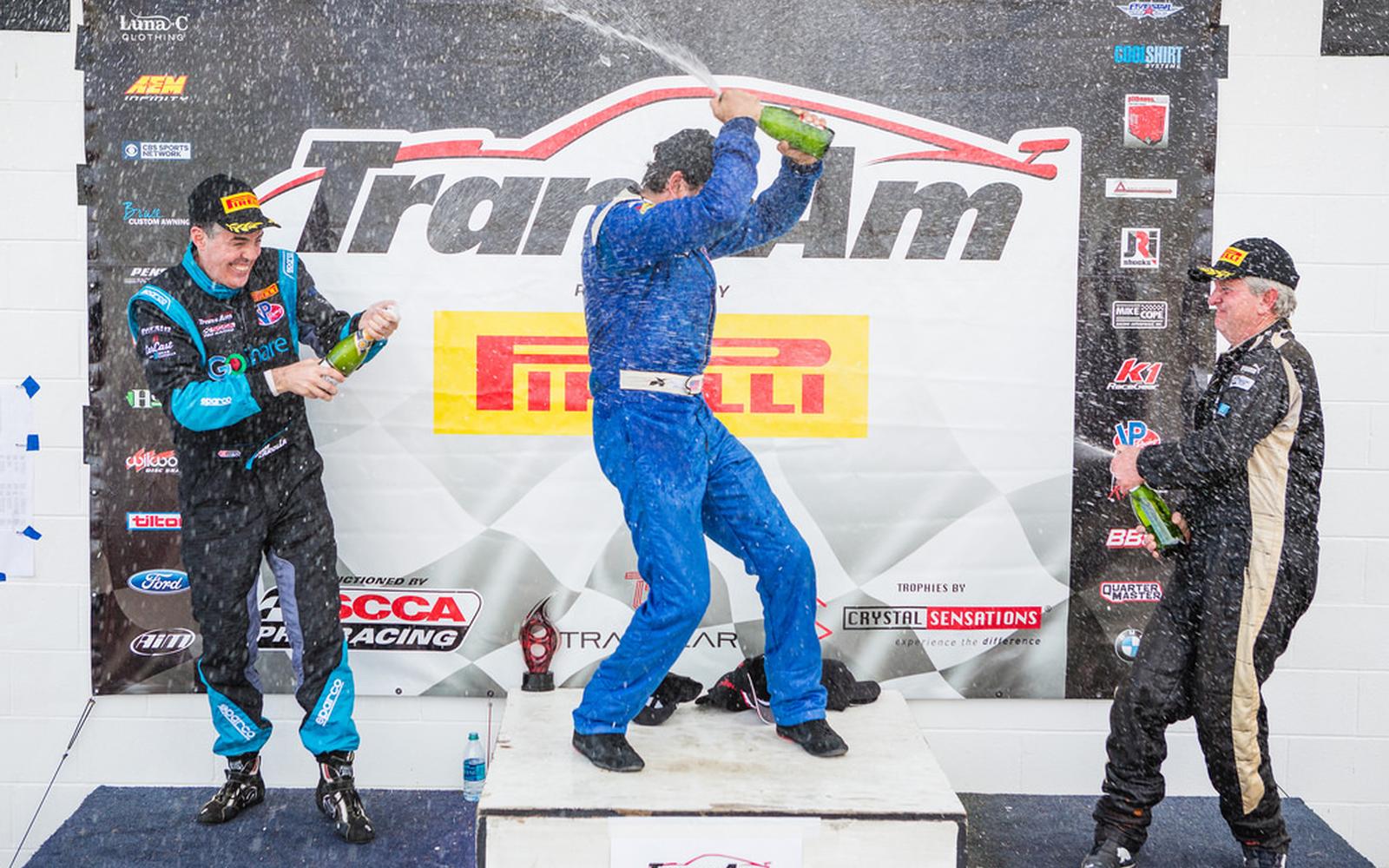 Rosamond, CA – March 28, 2017 – Trans Am presented by Pirelli rolled out west to Willow Springs International Raceway for the inaugural High Desert Challenge this past weekend. Burtin Racing entered a two-car stable with Adam Carolla in the team's No. 33 and Richard Wall in the No. 7 GoShare Corvettes. This event marked the first West Coast Trans Am race since 2009 at Portland International Raceway and was highly anticipated by fans and competitors alike.

The race was a triumph for the Burtin Racing Team with a double-podium finish courtesy of Trans Am veteran Wall, who was the runner-up, and series debutant Carolla, who crossed the checkered flag to record a strong third place.

With impressive lap times and savvy race craft, Adam Carolla proved to be more than competitive in the GoShare Corvette C7.R.  The 850hp Chevrolet is a high-powered, all-American racing machine and it has superb handling abilities, but its monstrous acceleration and cornering abilities are not easily mastered.  Carolla, however, in making his professional racing debut in Trans Am, came quickly to grips with the car and made encouraging progress all weekend in the preliminary sessions.  He qualified the car solidly and sat fifth on the starting grid for the 100-mile feature race.

Carolla began the race by pacing himself and sizing up the field before making the pass for fourth position on the 30th lap.  He eventually moved up to third with ten circuits remaining.  Over those final laps, Carolla would remain right on the pace, and created enough of a gap to stave off the more experienced former series champion Greg Pickett from making a final, last-gasp charge for podium placement.  For his progress throughout the weekend, his “cool” approach and the podium finish, Carolla was awarded the COOLSHIRT Systems “Cool Move of the Race" award. It was a fantastic debut and sweetheart result for Burtin Racing.

Comedian Adam Carolla is of course, host of The Adam Carolla Show, CarCast, Ace on the House and the new hit show, Adam Carolla and Friends Build Stuff Live on Spike. Carolla has famously set the record for the "most downloaded podcast" as judged by Guinness Book World Records in 2011. But this weekend was all about stepping on the pro racing stage for Carolla.

Running alongside Carolla on the 2.5-mile “Big Willow” circuit was the last-minute team entry for Richard Wall from Whittier, CA. Joining the team late and not knowing much what to expect, he went out and gave series regulars a provocative run all weekend.

“I was able to get together with Claudio (Burtin) and make a deal,” said Wall. “It was great working with him and his GoShare crew. They gave me an excellent car-- it was well prepared and great to drive. I did everything I could to get good results. Adam and I got the job done! Another lap and we may have seen different results as the leader started leaking oil there at the last two laps.”

For Wall, the event marked a return to Trans Am racing, his last appearance coming at Mid-Ohio in 1985 and his return came serendipitously. Entered as a competitor with the supporting SVRA race featured at the Willow Springs High Desert Challenge weekend, Wall’s SVRA car suffered a mechanical failure early on in the weekend. He happened to be passing through the Trans Am paddock and stumbled upon a potential open seat of the Burtin Racing C5 Corvette on Friday morning. After 30 years away from the TA class, Wall was enticed and intrigued by the chance to get back behind the wheel.

Wall made the most of his series comeback. He was able to work his way up from his sixth starting position on the grid and finished the race in a truly impressive second place. It was a remarkable return to a series Wall called home in the mid-eighties.

“Fantastic weekend for the GoShare Burtin Racing team with both cars on podium," stated Claudio Burtin, team owner at Burtin Racing. “Richard Wall put up an incredible result, coming from nowhere to finishing second-- a truly spectacular effort on his part. I think we all have to take our hat off to Adam Carolla on his debut in Trans Am. This is a fast and difficult track at Willow Springs, and the team is ecstatic with Adam's podium finish. GoShare is thrilled with the results and we will work to improve one step higher on the podium next time.”

The Trans Am presented by Pirelli West Championships will swing out to the pacific coast again on April 29-30 for Round 2 at Auto Club Speedway. For more information on the series schedule or info visit gotransam.com.

For more information on Burtin Racing please go to burtinracing.com for team news, photo galleries, videos and more. Take a moment to also learn more about our partner, GoShare, your friend with a truck at goshare.com.

Hosted by Adam Carolla and Matt D’Andria, CarCast is the most downloaded automotive podcast in the world. It is the only show of its kind that explores all aspects of the automotive space with an entertaining humor and expertise that only Adam and Matt can bring. The guys answer your questions, offer advice and feature the best new and custom-built rides. CarCast regularly features guests from the automotive industry and celebrity car enthusiasts. New episodes are available every Friday by subscribing to CarCast on iTunes via the PodcastOne mobile app or at CarCastShow.com.