WILLOWS, CALIF. (15 MAY 2021)- In an intense last lap battle to the checkered that generated the closest finish in Trans Am Series presented by Pirelli West Coast history (and in recent national Trans Am history), Carl Rydquist extended his championship points lead with his third consecutive victory on Sunday.

Series rookie Greg Tolson caught Rydquist in Turn 1 of the final circuit, but the pass didn’t stick, as Rydquist reclaimed first place the following turn. Then in Turn 14, Tolson got a good run on Rydquist to take the lead. The pair barreled down the front straight side-by-side with Tolson in the No. 33 GT Auto Lounge Chevrolet Camaro crossing the stripe ahead of Rydquist by 0.381-seconds. 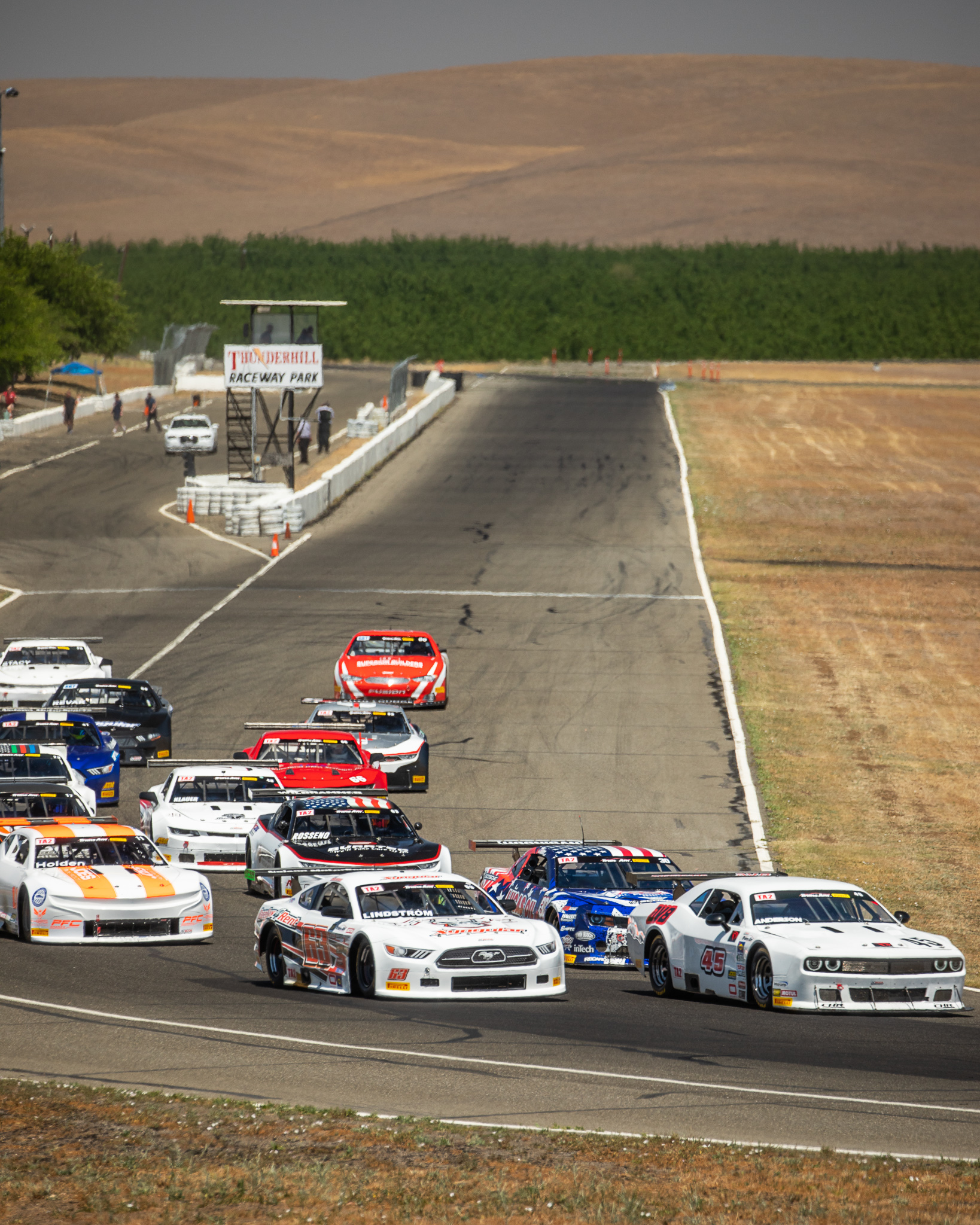 Tolson’s result was later nullified after technical inspections concluded that the car was not running the required restrictor for the TA2® class, promoting Rydquist to first.

“Not a straight-forward first TA2® win but I'll take it," Rydquist said. "Down on power second half and carefully managing engine heat caused by the exhaust contraptions required to meet the noise limits here, I fully relied on the quick MCR chassis and Pirelli tires to stay in the lead through the very last turn. Tom, Tony and the whole crew gave it everything last night to make it fast and legal and it paid off big time. With bonus points for fastest lap and most led laps, the Nelson Motorsports team earned this win 100 percent."

Rydquist started the race in nearly last place after not turning a qualifying lap due to mechanical issues. Rydquist’s No. 47 Racecars4Rent/GroupWholesale Ford Mustang charged from 12th to second before the mid-point of the 100-mile race, trailing pole-starter Darrell Anderson in the No. 45 Park Place Constructors Dodge Challenger by more than three seconds.

On Lap 14, Michele Abbate spun exciting Turn 3, as she restarted her No. 30 Lucas Oil Products Chevrolet Camaro, the flames from the exhaust caught the dry grass on fire. A full course caution was issued for safety crews to put out the fire and tow Abbate to the pits so she could refire her engine safely. Abbate was running in third before the incident, she continued the race two laps down, and finished with a ninth-place result.

The full course caution was a blessing for Rydquist. With the cars grouped up, Rydquist could challenge race leader Anderson. The California resident took the lead on the restart with an outside pass into Turn 1 after Anderson lost power and fell down the running order. Anderson retired the race on Lap 19, blowing an engine, the same fate he suffered just 10 days prior during his race at WeatherTech Laguna Seca.

“It’s really disappointing,” Anderson said. “The crew worked really hard this weekend. We’ve led every session and to lose the race like this again is just devastating.”

Laguna Seca winner Tim Lynn suffered an incident on Friday during testing. His team replaced the full rearend of the No. 17 Roof Options Ford Mustang before Saturday’s qualifying. Lynn started the race in sixth place and worked his way to third, winning a race long battle with Nick Rosseno in the No. 03 Burretc Waste Ind/Amsoil Chevrolet Camaro.

Rosseno crossed the line in fourth, but was later promoted to third following Tolson’s disqualification. Jeff Holden rounded out the top five in the TA2® class.

With Lynn’s overall second-place finish, he is now second in the West Coast TA2® class points.

“I would like to thank my team, they worked all night on Friday to replace the rear end and get me on the gird for qualifying,” said Lynn. “We are second in points now and we are going to take the championship fight with Carl (Rydquist) to the very end.” 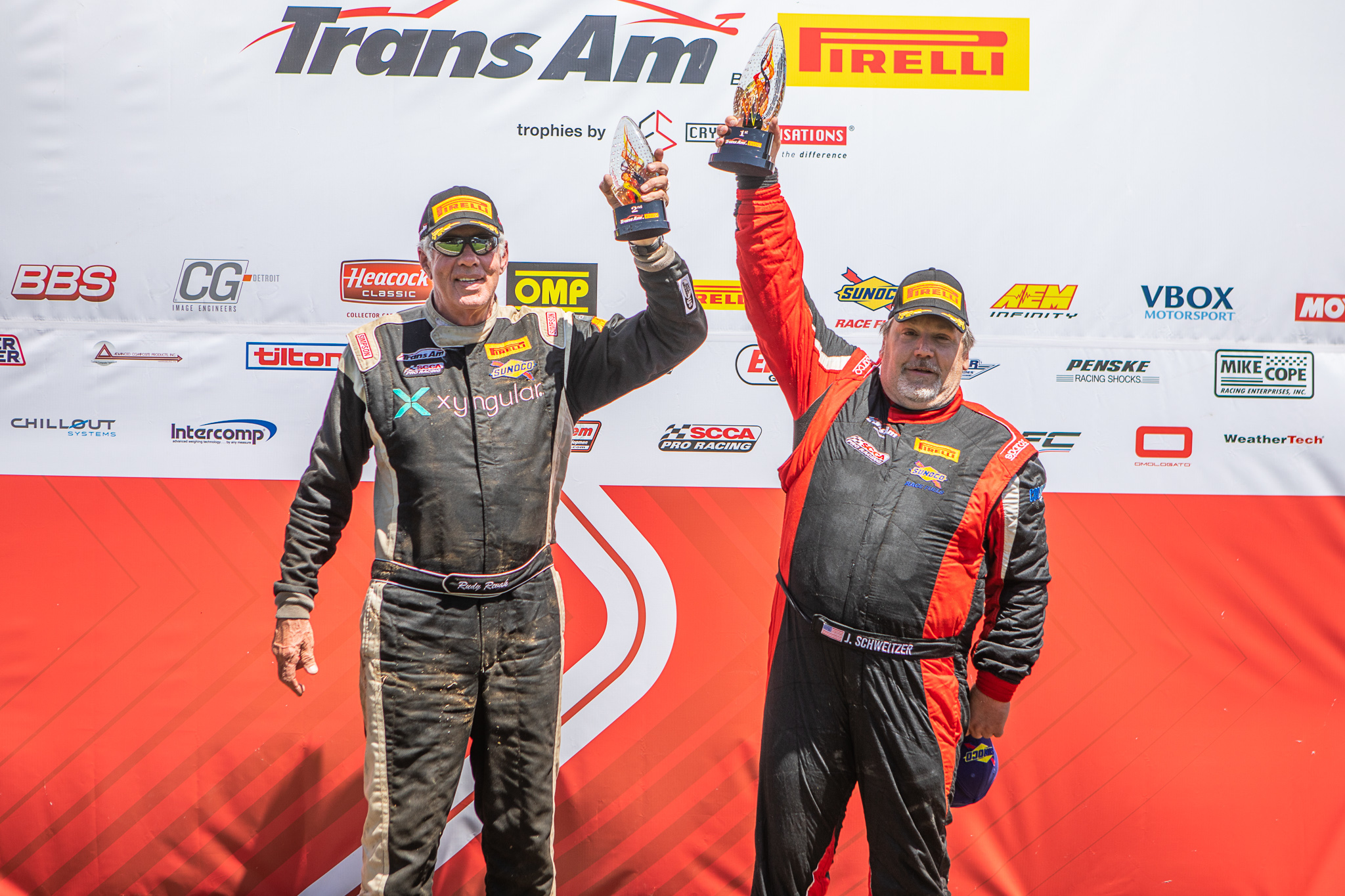 John Schweitzer in the No. 00 Superior Builders Inc Ford Fusion nearly ran out of gas battling Rudy Revak for the SGT class win. Schweitzer got a bit of relief when Revak spun after another car made contact with his No. 60 Racecars4Rent Chevrolet Monte Carlo. Revak continued but during the yellow went to the pits to refuel, putting him a lap down.

Schweitzer crossed the line first in class and eighth overall. Schweitzer was second in the SGT class championship behind series newcomer Rob Crocker. Crocker missed Round 3, and the victory today at Thunderhill for Schweitzer put him within striking distance to take the championship lead at The Ridge.

“This is my first time at Thunderhill and overall it was a great experience,” said Schweitzer. “Thunderhill offered a lot of new experiences for me and we are going to try and make a run for the championship this season.”

The Trans Am Series presented by Pirelli West Coast series will continue their journey up the Pacific Northwest to The Ridge Motorsports Park in Shelton, Washington, supporting SVRA in the first Ridge SpeedTour event June 12-14.