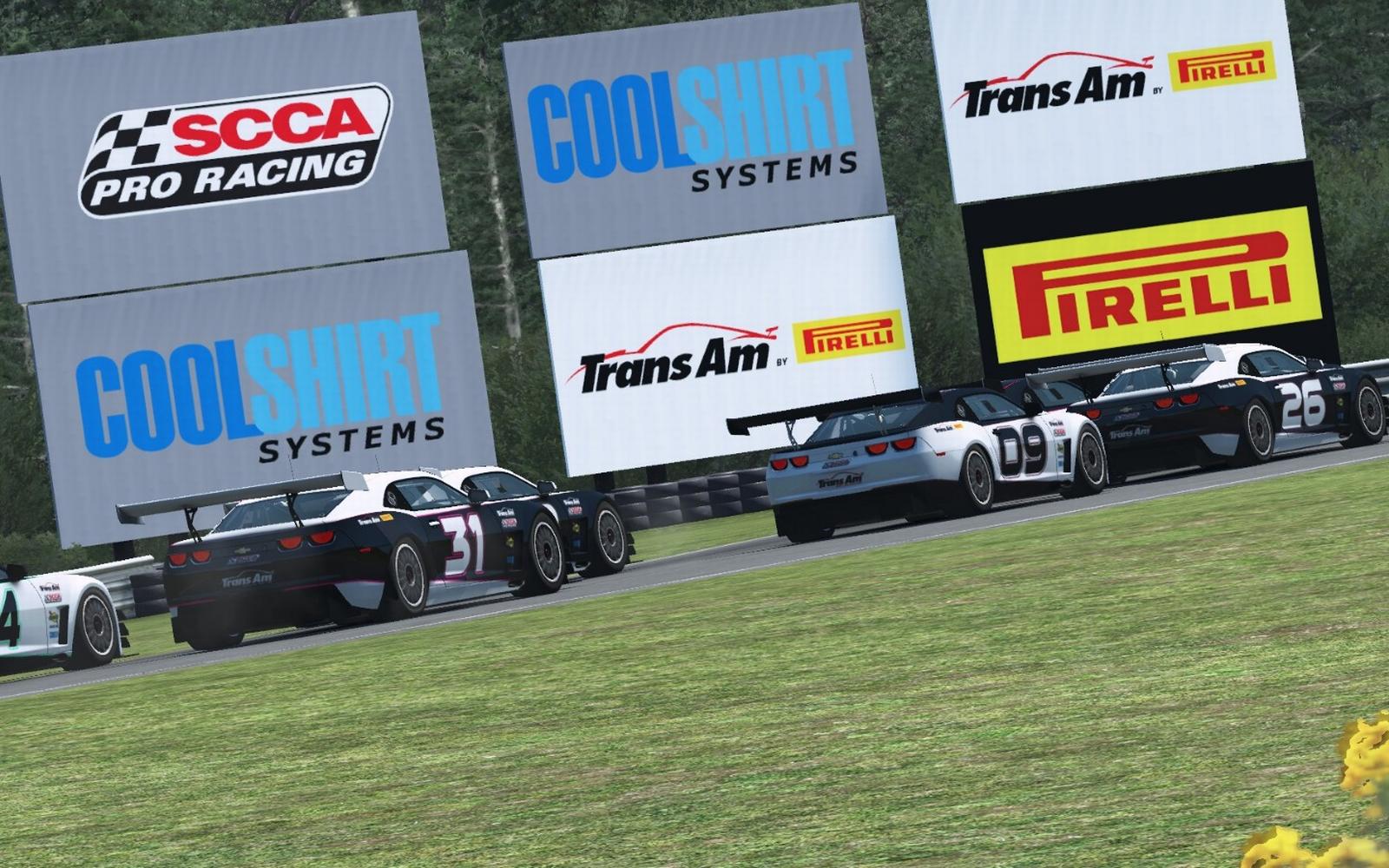 Replays available on Trans Am by Pirelli App:

LAKEVILLE, Conn. (28 March, 2020)- The Trans Am Series presented by Pirelli added a new chapter to its 54-year history on Saturday as America’s road racing series took to Lime Rock Park for its inaugural Esports competition with a double-header race.

While the races were virtual, Trans Am still delivered the intense racing action its known for. Twenty-six current, former, and future Trans Am drivers made the most of the virtual opportunity to bump, drift, and run around the fast 1.5-mile Lime Rock Park, which featured identically trimmed 2012 Camaro GT3 chassis during a swift 10-minute qualifying followed by two 20-minute race sessions.

But in the end after last-lap battles in both races, two-time TA2® champion Cameron Lawrence, in the No. 4 3-Dimensional Services Group, added “Trans Am eRace winner” to his long list of accolades, claiming both checkered flags in the Trans Am by Pirelli Showdown.

“It was kind of crazy in the first race,” explained Lawrence. “I drove off track and handed the lead to somebody else. I was surprised when they said I won.  On the second race, the biggest thing was working traffic and not making any contact. I saw a lot of dirt and people all over the place, and I was trying to keep it on the track. It was great going for the win on the last lap, I didn’t want to finish second.”

“I was saying before the race that I miss Trans Am – I am missing racing the real cars more,” said Miller. “People follow the rules a little bit better in real life. It was pretty crazy today, but I enjoyed it.

“I would have liked to have held the lead for the first race, but I did not like getting removed from the track by a lapped car. It was fun coming from the back in the second race. I got hit a few times, too, but it was like that for everybody. I was pretty pleased with the results, considering that I downloaded rFactor 2 yesterday morning. Now I have the opportunity to have more options on my simulator and to be able to use it.”

In the opening round, Miller held the point for most of the race until lapped traffic slowed his efforts. Kicera took a brief lead before a tap from a lapped car sent him spinning across the track. A prowling Thomas Merrill (No. 28 Diehl-Merrill Racing HP Tuners Mike Cope Racing), who won the real-life Lime Rock race last season in TA2®, capitalized on the leaders’ misfortunes, crossing the stripe in first. However, a post-race penalty was issued to Merrill due to an unserved in-race penalty as second-place, finisher Lawrence was `classified as the race winner.

“The race was awesome, I love Lime Rock and was stoked to see that our first sim race would be there,” said Merrill. “We are definitely still working out the kinks (on the sim integration), but I want to thank John Clagett and his team for doing such a great job to put this event together in a very short period of time. I can’t wait to get back behind the wheel of my real Diehl-Merrill Racing HP Tuners Mustang, but until then, I’m excited for more Trans Am Esports!

After drivers dialed in during Race 1, Race 2 delivered better racing, more intense action and more heated battles throughout the field. With the inverted lineup based on finishes in Race 1, John Paul Southern (No. 13 Stevens-Miller Racing) and Kicera started from the front row with Daniel Urrutia (No. 7 Ferrea Racing Components, Saenz Transmissions, Mustang Vacuum Coatings) and Sevadjian filled out Row 2.

Kicera got the jump on Southern for the lead and paced the race for nearly half the session until Lawrence, starting from last place, stormed through the field to steal first. Kicera paid back Lawrence in a huge pass in the final moments of the 20-minute session, shuffling Lawrence back to second. But, just like in the first round, lapped traffic halted Kicera’s hunt for victory. Weaving through traffic on the final lap, incidental contact between a slower car shunted Kicera off course. Lawrence took the lead and the checkered. Kicera settled for second with Miller in third. Eagleton finished just outside of podium-position in fourth and Archer completed the top five.

"We’ve all been itching to get back on track, so first off, a huge thanks to Trans Am for hosting the event," said Kicera. "After qualifying in the top five, I had some technical difficulties take me out of the first race right away. I got them fixed for race two and ended up in a great battle with Cameron Lawrence, trading the lead over the last 10 minutes. Lime Rock is like a short track and navigating lapped traffic was extremely difficult. I think we were both stronger in different areas and I used some lapped traffic to make an aggressive move for the lead with a few laps to go. Cameron got to me on the last lap going into Turn 1.  I was in the middle, three-wide, and I was turned. I’m extremely thrilled to still come home in second."

With a lot more experience in the real world than the virtual one, six-time Trans Am Series champion career, Ernie Francis Jr. entered the races as an underdog. But Francis Jr., who won the  2020 season-opening TA race at Sebring International Raceway earlier this month, learned quickly to score sixth in the second race.

As Trans Am and track management are still monitoring the impact of COVID-19 in Connecticut, Trans Am presented by Pirelli is scheduled to return to real-life racing May 22-25 for the Lime Rock Festival. Future simulation races will be announced at a later date.

Full replays of the race can be found by downloading the Trans Am by Pirelli app for free: 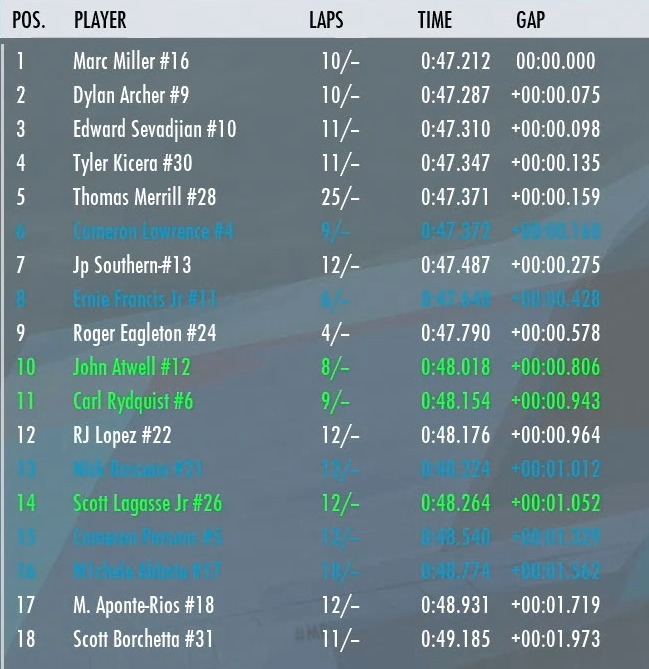 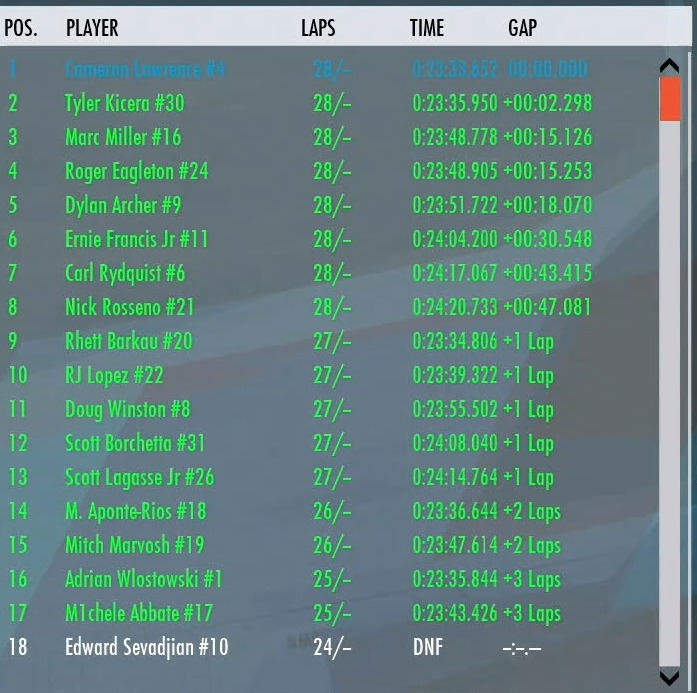