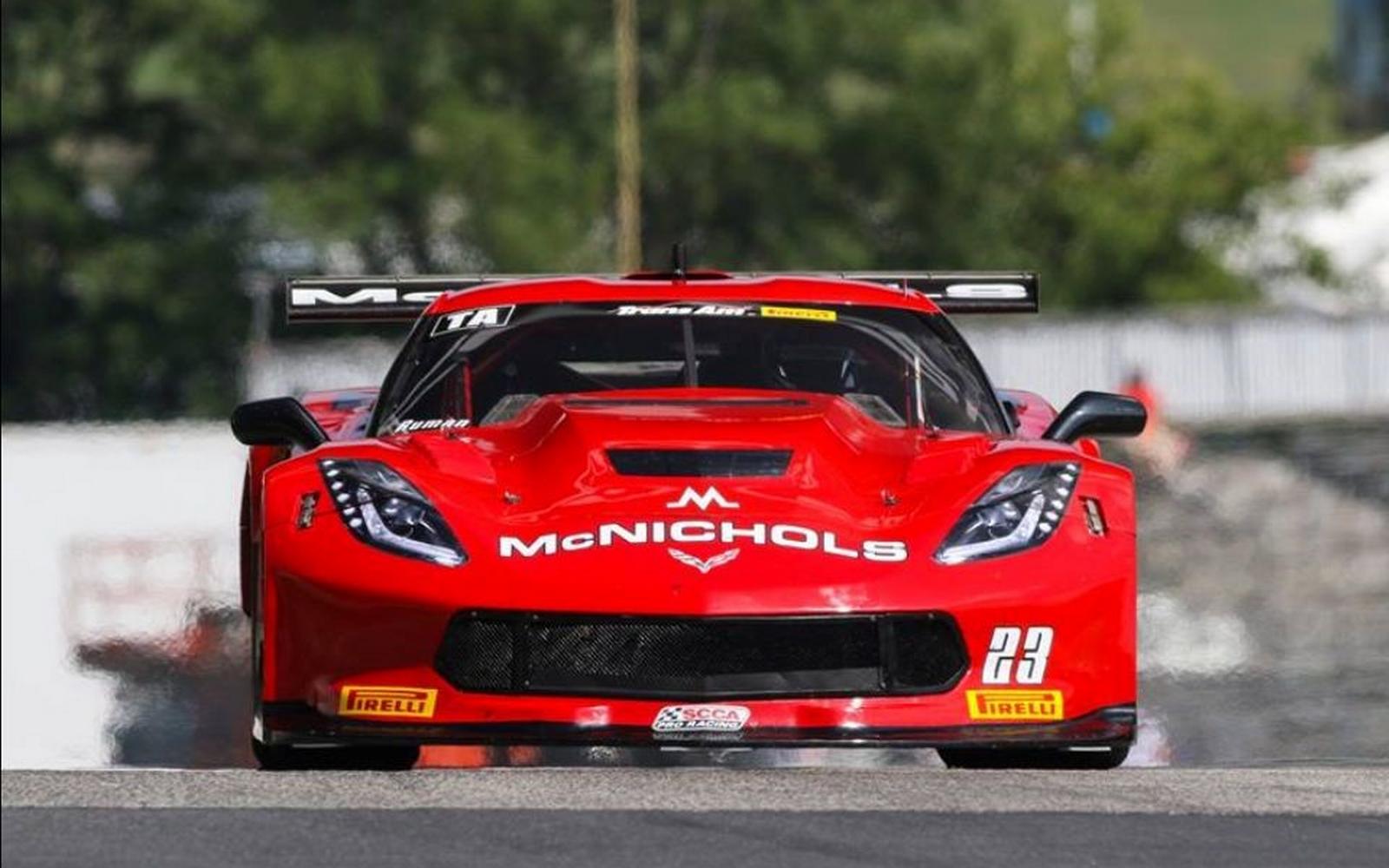 Amy Ruman and team will kick off celebrating the fourth of July a little early over the holiday weekend during Round 8 of the 2022 Trans Am Championship Presented by Pirelli at Road America, WI. The Trans Am teams are heading north for back-to-back races after a fast turnaround from the race at Mid-Ohio Sports Car Course last weekend.

After an eventful weekend at Mid-Ohio, Ruman heads to Road America fourth in the Championship points race after a comeback sixth place finish. She suffered a mechanical issue in qualifying which prevented her from scoring a fast lap ending her session right away. Grided 16th in the back of the multi-class field, the No. 23 McNichols Chevrolet Corvette suffered another issue—as Ruman fired the car for the pace laps, the hydraulic throw-out bearing on the clutch failed. The team pushed her back out of line, then were finally able to push start the car and get her rolling late, in 17th place. She was able to catch up with the pack, starting the race on time. She made her way through the field and was in close pursuit of Thwaits and Drissi who were running in 5th and 6th place. Unfortunately, Ruman caught a double yellow caution at the wrong time putting her a lap down and preventing her to make up any more positions after the restart.

“This was a weekend of adversity for us,” said Ruman. “We couldn’t catch a break, after overcoming the mechanical issues, I caught the yellow at exactly the wrong time. I did a pretty good job making my way through the field, but it takes time and the leader caught me just as the track went under caution. It was a shame, because we had a good car at the end of the race and I definitely would’ve been right in it for the top-5 battle. I want to thank everyone for coming out to the race and cheering us on, I’m sure glad we got going off the grid and finished the full race.”

The Trans Am Series will be running alongside the NASCAR Cup and NASCAR Xfinity Series this weekend at the renowned Wisconsin circuit. The legendary 14-turn, 4.048-mile track is one of the fastest tracks on the schedule where the TA cars can showcase their horsepower.

“Ahead of the fourth of July holiday, I’d like to thank and celebrate our military members and am so grateful for Independence Day! We are extremely blessed in this country to enjoy the freedoms that we have every day – on behalf of the Ruman Racing/McNichols Co. we thank you!” remarked the two-time Trans Am champion. “My guys went through the car, and I am optimistic we will have a problem-free weekend. Road America is a great track and I love racing here. There is a deep entry field of talented TA competitors so it should be a great show for the fans.”

Seventy-four competitors are entered across all classes for the weekend with thirteen running in Ruman’s TA class. Testing, practices, and qualifying will take place Thursday through Sunday. The Ryan Companies 100 TA/GT feature race will be Saturday, July 2nd at 5:00pm CT followed by the TA2® race on Sunday, July 3rd at 10:30am CT, both races are 25-laps. Please visit gotransam.com or roadamerica.com for schedules and all other weekend information. Live streaming will not be available for the Road America race, but fans can tune into social media and the Trans Am app for live timing and weekend news.

LIVE STREAMING AND CBS TV COVERAGE OF THE TRANS AM SEASON:
The entire lineup of 2022 SpeedTour will LIVE stream for FREE! Fans can watch from anywhere on a variety of social media platforms including the new SpeedTour.TV, the Trans Am Facebook page, and YouTube channels SpeedTourTV and the Trans Am Series.
Live streaming at Road America TBD.