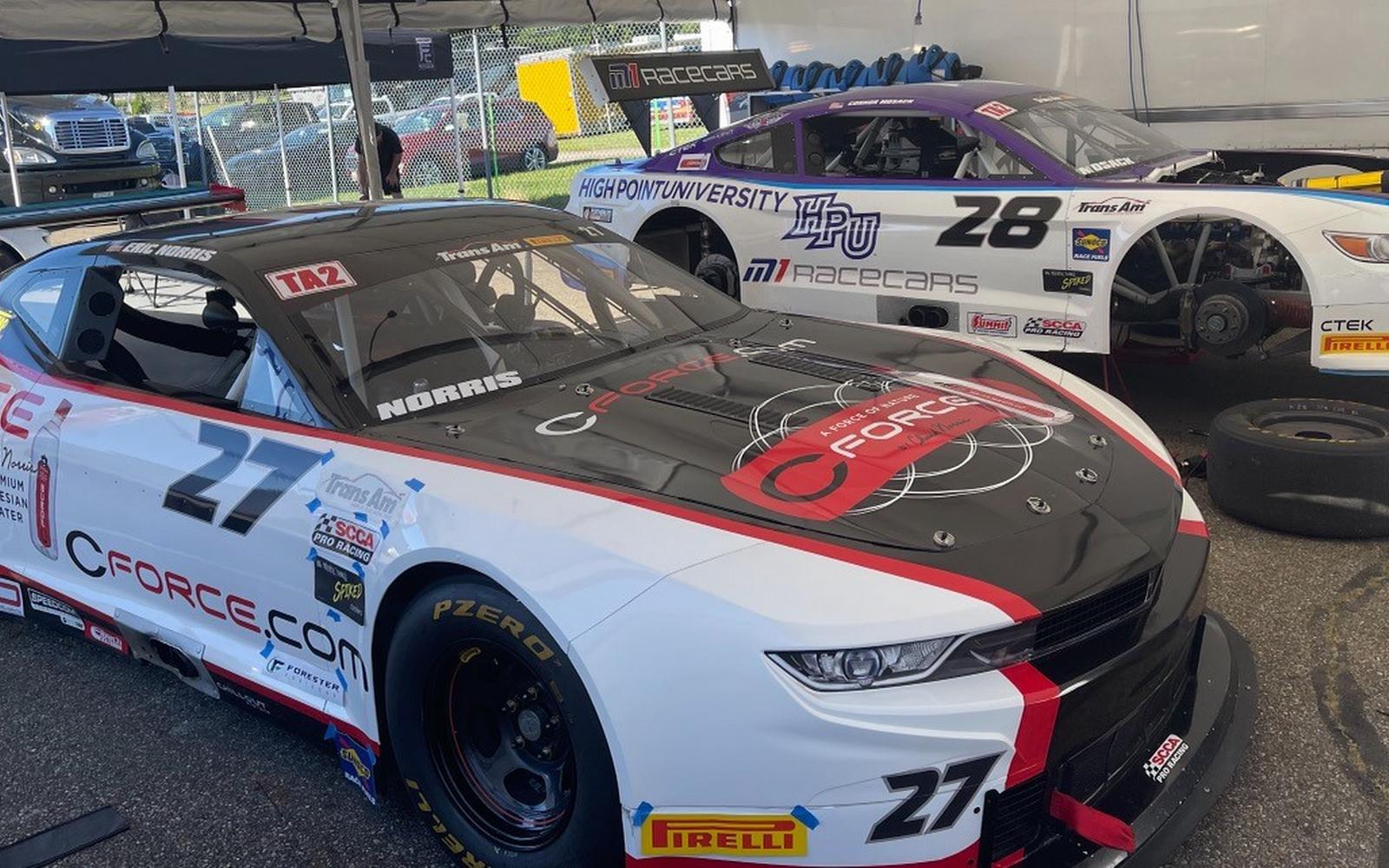 TeamSLR is packing quite the one-two punch as it heads to the heart of the Buckeye State for Sunday’s seventh round of the 2022 Trans Am Series presented by Pirelli, looking to continue the championship bid of its second-year fulltime driver Connor Mosack while also launching the series’ newest partnership featuring driver Eric Norris, the 57-year-old son of karate, Hollywood film and folklore legend Chuck Norris.

Mosack, the 23-year-old from Charlotte, North Carolina, finds himself in the thick of the TA2-class title chase after the season’s first six of 12 events as he heads to the 2.258-mile, 13-turn Mid-Ohio Sports Car Course in Lexington for Sunday’s 45-lap, 70-minute race. While he looks to improve upon the first career Trans Am podium finish he earned in his first-ever visit to Mid-Ohio a year ago this weekend, Norris, the 2002 NASCAR K&N Series West champion, looks to keep the flame burning on a decades-long racing career that’s been sprinkled throughout his life as an acclaimed stunt coordinator in the film and television industries since the mid-1980s. He’ll be making his debut in the series while representing a family business, CForce Naturally Alkaline Water, which earlier this month was named the “Official Water Company of Trans Am.”

Mosack’s breakout campaign in 2021 included numerous on-track and off-track milestones. In only his ninth career TA2 start, he secured his first podium finish with a third-place run June 26 at Mid-Ohio, just a month-and-a-half after graduating with a degree in business entrepreneurship from High Point (N.C.) University. Then on Aug. 7 on the streets of Nashville, Tennessee, Mosack earned a second podium finish, which set the stage for his breakthrough win Sept. 12 at Watkins Glen (N.Y.) International. The triumph also boosted Mosack to third in the TA2 standings, a position he held through the season finale Nov. 7 at Circuit of the Americas (COTA) in Austin, Texas, where he finished second to championship winner Rafa Matos.

Since this season’s previous TA2 round on Memorial Day weekend at Lime Rock Park in Lakeville, Connecticut, Mosack made his presence known during his NASCAR Xfinity Series debut in the Pacific Office Automation 147 on June 4 at Portland (Ore.) International Raceway behind the wheel of the 18 OpenEyes.net Toyota GR Supra for Joe Gibbs Racing (JGR). In wet and oftentimes treacherous conditions, he put his TeamSLR and Trans Am road-racing experience to good use in driving from his eighth-place starting spot to as high as second place until a costly penalty dropped him to midpack. He was collected in a multicar accident 12 laps from the finish that prematurely ended a promising run. Unfazed, the determined young driver went on to post an impressive pair of top-three runs in ARCA Menards Series competition.

In the ARCA Menards Series West race later that day on the Portland circuit, Mosack qualified third, led nine laps and drove to a runner-up finish in the No. 17 Steve McGowan Motorsports Chevrolet. The following weekend, on June 11, Mosack drove the No. 23 Brett Holmes Racing Chevrolet to a third-place finish from the sixth starting spot in an ARCA national tour race on the oval at Iowa Speedway in Newton.

Norris, who began racing motorcycles at a young age in and around his native Southern California, then stepped up his passion when he began racing Formula Fords at Willow Springs (Calif.) Raceway shortly after graduating high school in the early 1980s, rose to the ranks of NASCAR’s Camping World Truck Series and Xfinity Series while also pursuing his career in television and film over the next three-plus decades. His most notable on-screen credits occurred during his father’s starring role in the hit television series Walker, Texas Ranger from 1991 to 2003, when he directed or served as stunt coordinator for some 200 episodes.

Norris competed in a mix of NASCAR Truck Series, ARCA Menards Series and K&N Series West events from 1997 to 2012 with his greatest success coming in the latter tour. In 2002, he drove to top-10 finishes in all 10 K&N Series West races run that year, a run that included a pair of pole positions, victories at Las Vegas Motor Speedway and Evergreen Speedway in Monroe, Washington, and eight top-fives. He won the championship by a 119-point margin.

This weekend, Norris makes his competitive return to the racetrack for the first time since running Super Late Models at Mesa Marin Raceway in Bakersfield, California, in 2019. While it marks his first time behind the wheel of a TA2-class racecar, he has enjoyed success at Mid-Ohio, driving a Panoz GT to a victory and a second-place finish during a doubleheader weekend in the mid-2000s.

He’ll be sporting the colors of CForce Naturally Alkaline Water and the CForce Bottling Company, which is a certified woman-owned business founded in 2015 by the husband-wife team of Gena and Chuck Norris. CForce water comes from a sustainable source under Chuck Norris’s Lone Wolf Ranch in Navasota, Texas, and is bottled on site. CForce has what every major water tries to add in using salts or chemicals, but has it naturally. This artesian water is filtered through volcanic rock before being deposited into a deep, sustainable aquifer. The water emerges rich in natural electrolytes, which raise its alkalinity, and from a source so deep, it is void of any biological factors. The aquifer cultivates clear, clean water with a high pH and deliciously smooth taste due to its natural silica content.

In addition to its role as “Official Water Company of Trans Am,” CForce will also contribute a cash prize for a CForce-sponsored award to be given at the year-end Trans Am championship banquet at COTA in November.

Connor Mosack, Driver, No. 28 High Point University/Nic Tailor Custom Fit Underwear/Interstate Foam & Supply/TeamSLR/M1 Racecars Ford Mustang:
You scored your milestone first Trans Am podium finish at Mid-Ohio a year ago this weekend. What are your thoughts about that race, and how does it bode for your chances there this weekend?
“It was a pretty good race for us at Mid-Ohio last year. I feel like we really should’ve finished second but I just gave up the spot right there at the end after we worked really hard to get it. But I feel like our cars are definitely going to be better this year going into it, and now I know the track better. So I feel like if we had a good run last year, this will be my first time back and we can be that much better this year. We’ve been more competitive at every track we’ve been to this year relative to last year. It’s a good track for our cars, and we’ve gotten them better, so we should have a good shot.”

How does the tight, twisty layout at Mid-Ohio suit your driving style, and what would it take to put you over the top this time around?
“I like Mid-Ohio. Scott (Lagasse) Sr., showed me some tricks around there that I feel will pay off, and hopefully we can put those to good use because it’s probably one of the more technical tracks we go to. Like turns four through seven, there are about 10 different ways you can go through there, and that’s where some of Scott’s experience there has helped us out a lot, just knowing where to give up speed and where to be aggressive and what makes overall the best total time through there.”

You made a big splash, so to speak, on a wet and rainy weekend in Portland three weeks ago when you made your NASCAR Xfinity Series debut. How was that experience for you?
“Portland was very special – making my (NASCAR) Xfinity Series debut was obviously a big deal, especially with a high-profile team like Joe Gibbs Racing. It was a great experience. The car was great. Even though there was a little more rain than we would’ve liked, we were still able to run up front for most of the race. Unfortunately, we got a penalty for something I felt was not fair, but that happens sometimes, and then we just ended up getting caught up in a wreck after having to restart toward the back. But as far as things that were in our control, we had a pretty good day going. The ARCA race right after the Xfinity race was also good. I felt like we had the best car – probably about half a second better than everybody when we were by ourselves or in clean air. But it was so wet in that one that we really couldn’t race each other. We also had to pit for some engine issues, and when I came back out, you really couldn’t see anything and you really had no opportunity to fight for the lead.”

What do you know about your new teammate who’s making his TA2 debut with TeamSLR this weekend?
“In know that my teammate this weekend is Chuck Norris’s son, and Chuck is a pretty cool guy. It’s cool to have new people around. Everybody has different levels of experience and everybody brings different things to the table that can help everybody else. Hopefully, we can learn something together and make our program better.”

Eric Norris, Driver, No. 27 CForce Water/TeamSLR/M1 Racecars Chevrolet Camaro:
You’re no stranger to Mid-Ohio, or racing in high-profile national series in general. How do you feel about getting back into a racecar, albeit for the first time in a TA2 car, this weekend?
“I love Mid-Ohio. I think it’s a fast and technical track. I just love the layout, and I had a good weekend there with a win and a second-place finish not long after my championship year. Hey, any racetrack you’ve won at, you’ve got to love. This weekend will be my first time in a TA2 car, but I’m excited, especially having Scott Sr., and Scott Jr., taking care of me. I know I’m going to be in first-class equipment. And with all their road-racing experience, they’ll really be a big help, so I’m excited to be part of their program.”

What have you done to prepare?
“I’ve been working out really hard in preparation for this, and sitting in the sauna a lot because it’s supposed to be really hot. This first race, I want to run all the laps, keep all four fenders on and get to the end and hopefully have a decent finish. But, this race is just to get my feet wet and get experience for the next time, and then the next time we’ll run really hard."

How special is it to be representing a family business, CForce Naturally Alkaline Water, on the racetrack?
“Our family is thrilled to kick off this partnership that brings America’s best water to America’s Road Racing Series. My dad and I have spent many years behind the wheel of a racecar, so we know that teaming CForce Bottling Company with the Trans Am Series is a perfect fit. We’re excited to merge our amazing product with an amazing group of people.”

About TeamSLR:
TeamSLR competes fulltime in the Trans Am Series presented by Pirelli in a multifaceted effort that includes dedicated entries in the TA2 division, customer programs, driver coaching and car construction. Its history dates back to 1985 and covers a wide spectrum of motorsports, including NASCAR, IMSA, SCCA, ARCA and ASA. TeamSLR is a family-owned organization run by Scott Lagasse Sr., and Scott Lagasse Jr., The father-and-son duo have combined to win more than 100 races and seven championships across a variety of series and styles of racecars, from paved ovals to road courses to dirt tracks. For more information, please visit us online at www.TeamSLR.com, on Facebook, on Twitter, on Instagram and on LinkedIn.