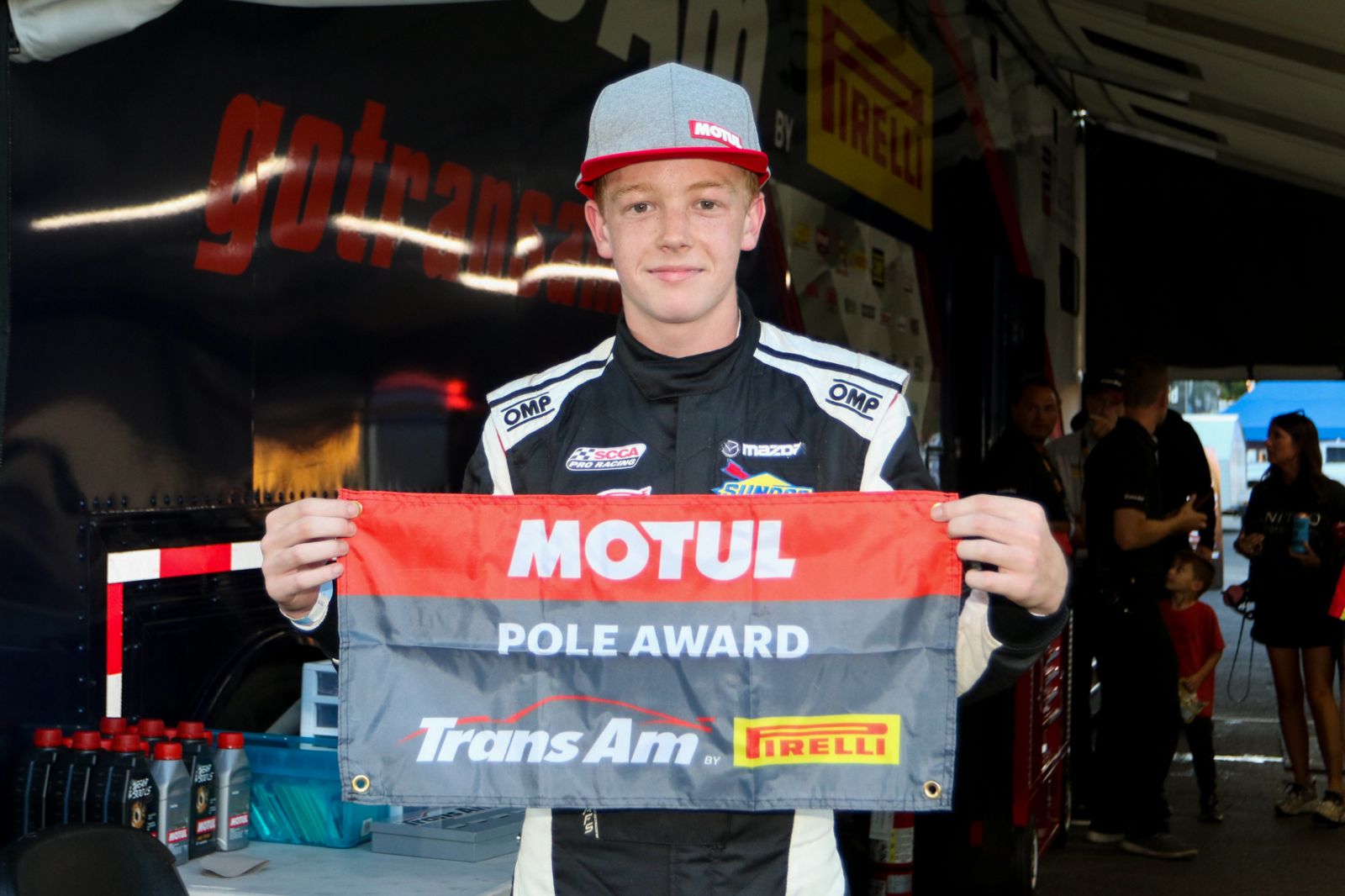 Running in Trans Am for the first time, Zilisch shattered the track record with a lap of 1:48.905-seconds to become the youngest pole winner in the history of the series. A world-champion karter from Mooresville, North Carolina, Zilisch is making the jump from a 150-horsepower Spec Miata to a 500-horsepower TA2®. Prior to Friday’s testing – in which he turned the fastest lap – Zilisch had only one test day in a high-powered race car. It was also only the second TA2 attempt for Nitro Motorsports and the No. 70 Hunt Brothers Pizza Ford Mustang, which was driven by Joey Hand in Nashville.

"The track was amazing and there was plenty of grip out there," said Zilisch. "The Nitro Motorsports guys set up my car perfectly, I was flying out there! Mike Skeen was my coach a few years back, and we stayed really good friends. It's crazy that I finished ahead of him. I really don't know how I did it. I am just amazed.

"I am not that experienced with this type of horsepower," continued Zilisch. "I have to concentrate on not spinning the tires tomorrow. I know I will need to practice it, and be ready when it comes time out there."

"We stole a few more points from Mike (Skeen) today," Matos said. "We didn't have anything for Connor (Zilisch) though. Congratulations to him, he was really quick today. Tomorrow we have to focus on getting a good start and keep Mike behind us so we can wrap up this championship. I really like VIR and we've had a lot of success here." 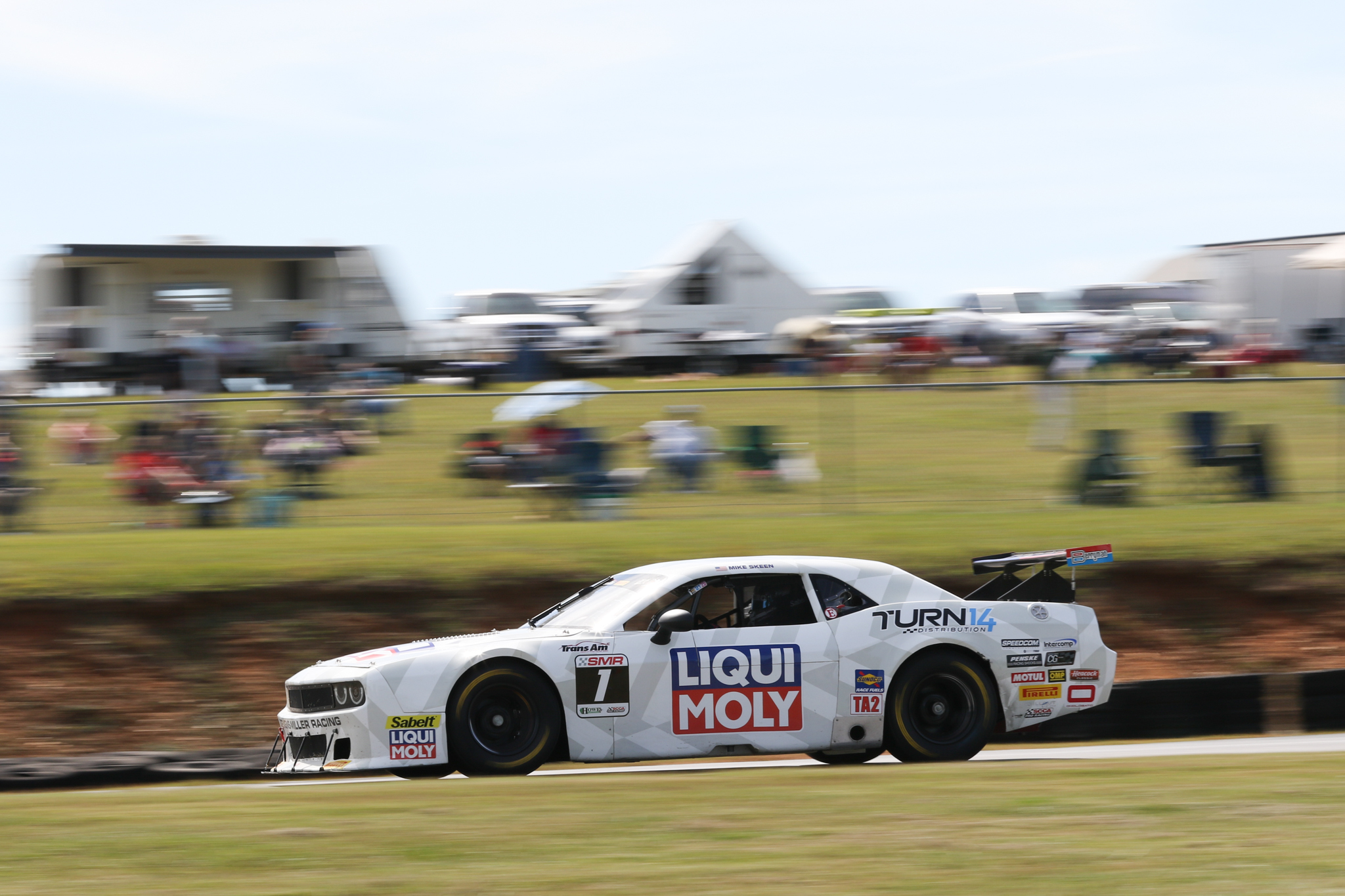 Skeen, switching from a Camaro to a Dodge Challenger to carry his No. 1 Liqui-Moly/Turn 14 Distribution colors, ran a fast lap time of 1:49.767-seconds.

"There's a lot of little things here and there that are different from the Camaro to the Challenger," said Skeen. "But, the biggest differences are that I don't have a lot of experience with setting this car up, and it tends to be a bit more loose. I really don't know what to expect for the race. We have our work cut out for us tomorrow and will be working extra hard to keep position."

Tyler Kicera, winner of the first race at VIR in 2020, was fourth in the No. 5 Silver Hare Racing Ford Mustang followed by Connor Mosack, winner of the most recent TA2 race at Watkins Glen International in the TeamSLR No. 28 Nic Taylor Chevrolet Camaro. Qualifying was delayed mid-session for an incident in the tire wall in Oak Tree turn for 15-year-old Evan Slater in the No. 12 Cube 3 Camaro. He was unscathed by the incident and wound up 15th in the session.

Dyson will lead the TA field to the green flag at 11 a.m. ET after capturing his eighth career pole and second of the season in the No. 20 ALTWELL CBD Ford Mustang. The current points leader turned a lap of 1:44.182-seconds, just shy of his 2019 track record of 1:44.065-seconds. (VIDEO: TA Qualifying Recap) 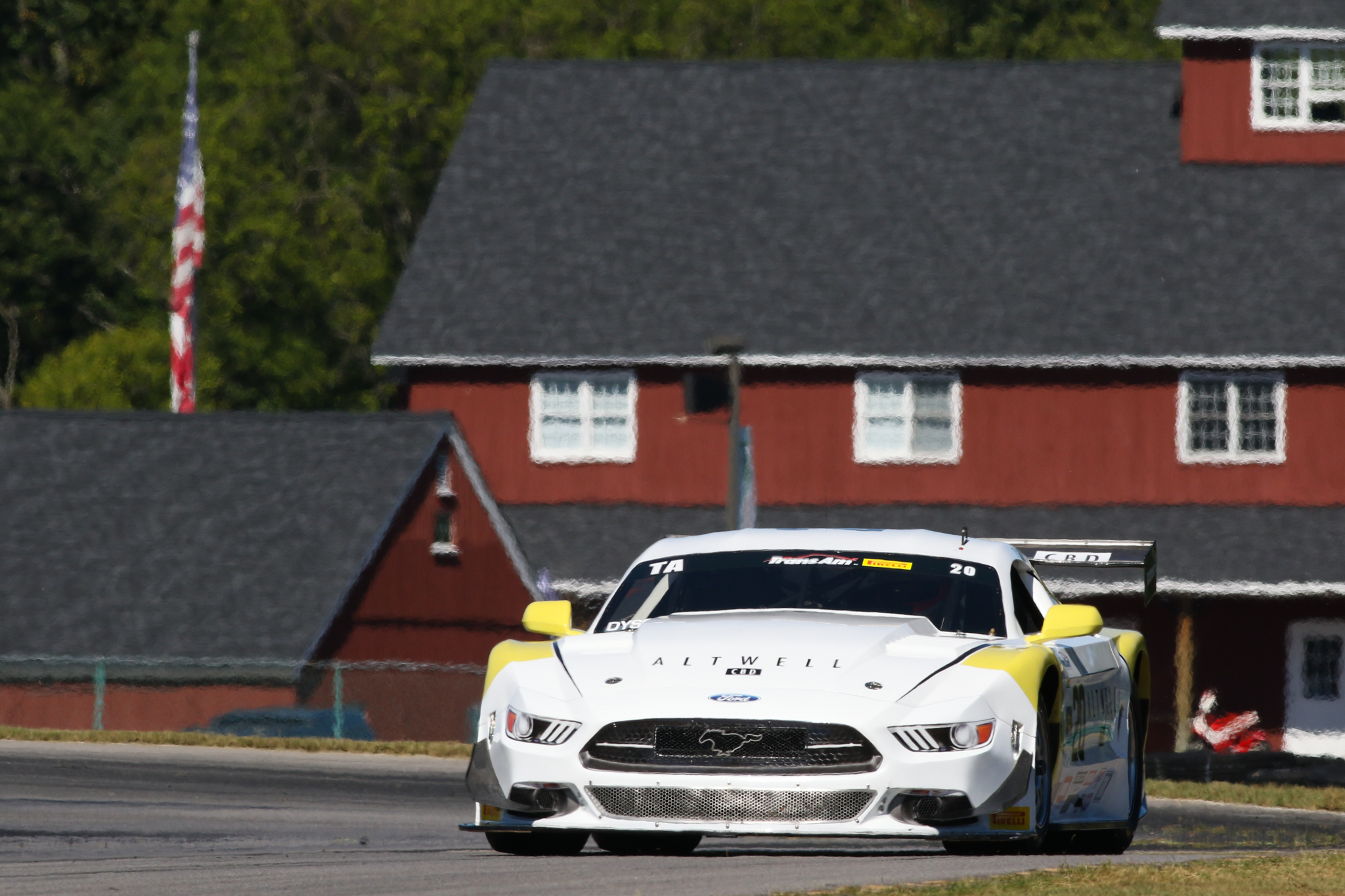 "We were back to form this afternoon," said Dyson. "The ALTWELL Mustang rolled off the trailer yesterday, and we were fast. It was great to put it all together during qualifying. I am delighted to be starting this race from the front row, on pole. This is a tough track to pass, and we need a good start tomorrow to stay out front. Racing here, it’s better to lead here than to follow.”

Tomy Drissi, second in the championship hunt, will start from the outside of the front row with a lap of 1:45.241-seconds in the No. 8 Lucas Oil Chevrolet Camaro.

"On my flyer, my front end started buffeting," explained Drissi, a four-time pole winner in 2021. "I thought we would have a chance at (Chris) Dyson, but the buffeting seemed to get worse so I pulled in early. Tomorrow I will be stuck to Chris, making him work extra hard to wear him out. But, I will have to be extra careful because we are also going to have to defend Boris (Said) and Ernie (Francis Jr.) who will be behind us."

Ernie Francis Jr., winner in the 2020 VIR doubleheader, will start fourth after pitting for a mechanical issue after posting one flying lap.

“This thing seems to have a mind of its own lately,” said Francis, whose streak of seven consecutive Trans Am titles is in jeopardy.

Running for only the fourth time this season, 2020 champion Lee Saunders took his first pole of the campaign in SGT, which runs concurrently with TA. The Lakeland, Florida, driver ran 1:54.889-seconds in the No. 84 Landsearch LLC Dodge Viper. 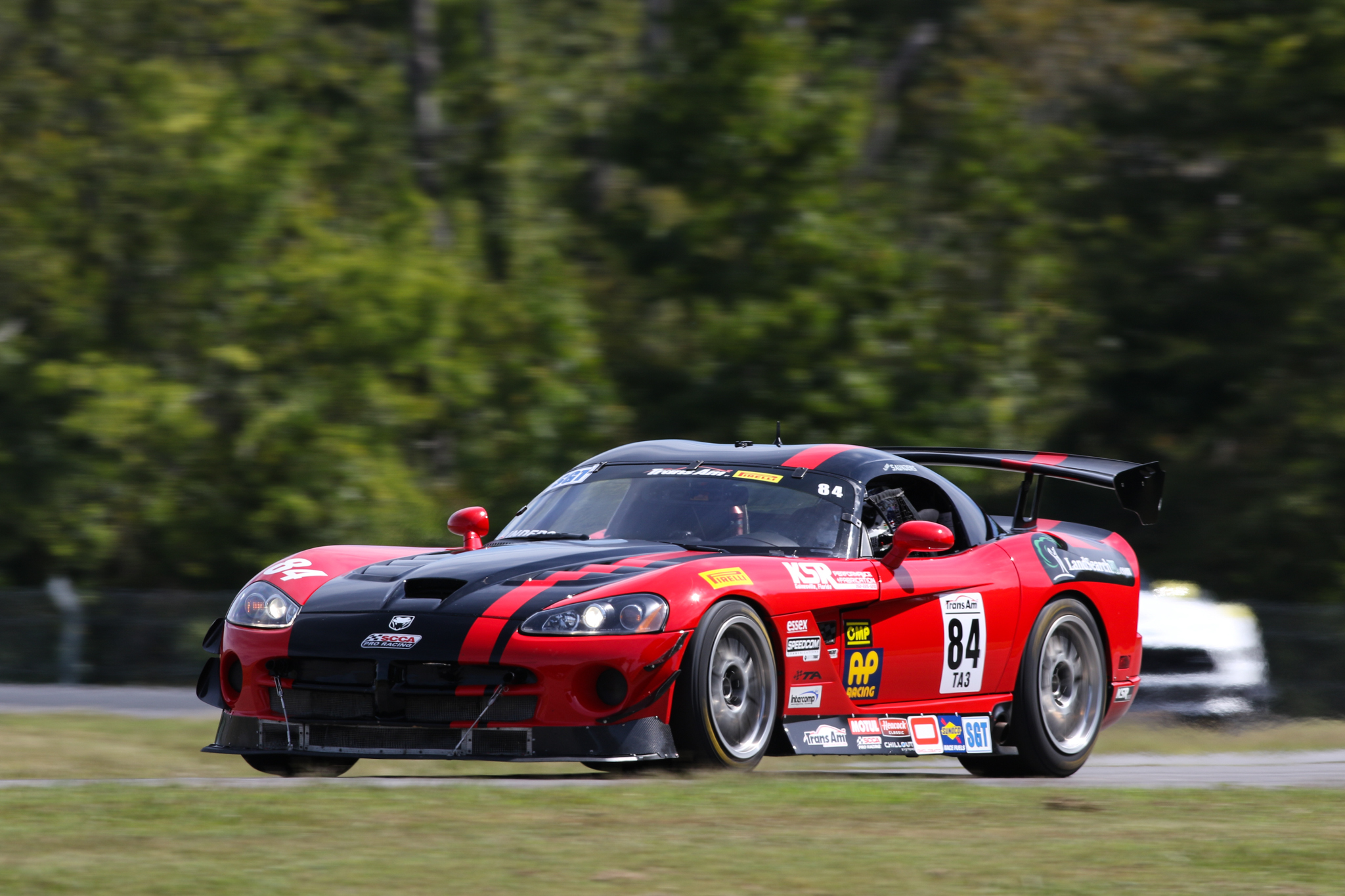 “It feels great to be back with Trans Am," said Saunders. "I am so happy to be here. This is one of my favorite tracks. VIR is beautiful, the weather is great and any time in a race car is a good time. The guys did a good job getting the car up," continued Saunders. "It was real balanced, and, man, they did just a great job today. I am super happy with what they did. Hopefully we can translate it to a good race tomorrow."

Paul Fix was second, 1:56.200-seconds in Tony Ave’s No. 29 StopFlex.com/CarCoachReports.com Audi R8, followed by Milton Grant and his son Carey Grant in a pair of Porsches.

The full VIR SpeedTour weekend will now be live streamed on The Trans Am Series Youtube channel. Rewatch the full Trans Am qualifying, along with the rest of Saturday's broadcast, here: VIR SpeedTour Live Saturday Coverage - YouTube