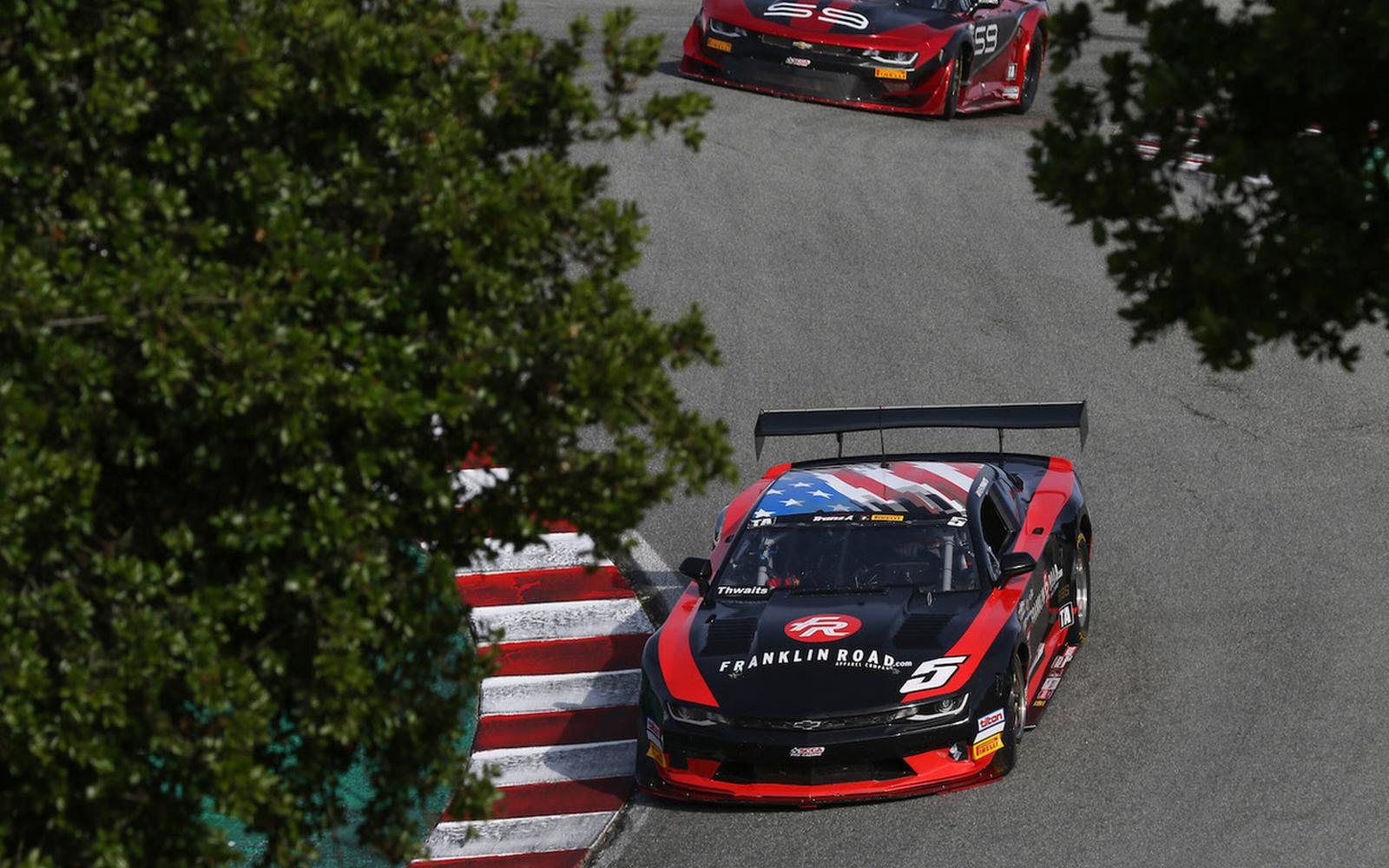 Franklin, TENNESSEE - May 4, 2021 - Ken Thwaits waited a long time to go back to Laguna Seca, fully 35 years according to Trans Am commentator Adam Andretti, but it was definitely worth it this past weekend with the Tennessee pilot clinching a fine podium third place finish in the TA Class race after the final standings were revised. That result put the icing on the cake for the popular newcomer to the paddock after he had guided his TA2 Class Dodge Challenger through a crowded field to a commendable P17 of 34 cars in Saturday's TA2 race, a result that garnered him his second Masters Award of the season.

It was a very busy weekend for Ken, who it can be all too easy to forget given his professionalism and the way he has adapted to the 850BHP TA Class machines, is still in his Rookie season in the iconic muscle car class. Round 3 of the 2021 Trans Am presented by Pirelli Championship season at the WeatherTech Raceway Laguna Seca represented only his third start in the big league, but Ken's drive was as solid as a rock as usual and he used all his experience to stay out of trouble in what can only be described as a very eventful race.

Looking to gain more valuable track time in his chosen field, Ken had decided in advance to double-up at Laguna Seca by competing in both the TA2 Class race, with the accompanying testing, practice and qualifying sessions and the TA Class race. In the TA2 Class Ken drove the No. 71 Franklin Road Apparel Dodge Challenger. In the TA Class race he drove the No. 5 Franklin Road Apparel Chevrolet Camaro that made its debut at Charlotte Motor Speedway and Road Atlanta.

Saturday's TA2 race was highly eventful, with plenty of cars leaving the tarmac area at different times while unwanted contact ended the chances of more drivers. As Adam Andretti indicated in the commentary, Laguna Seca is a track where laps matter so Ken did really well to guide the Dodge Challenger all the way up from his starting position on the grid to a finishing position of P17. Andretti paid tribute to Ken in the commentary when he said, "I love the fact that he's into Trans Am Racing. He's been a wonderful addition to the paddock."

Sunday's TA Class race was even more spectacular, though not always for the right reasons. It was very much a stop-start affair. Lou Gigliotti buried his Corvette in the sand causing a long red flag delay with all drivers forced to sit still in their cars while the track was cleared. Then, on lap 33 a skirmish between David Pintaric and Justin Marks enabled Ken to gain two more places as both were forced to retire. Finally, Boris Said shunted race leader Chris Dyson on the restart causing the ALTWELL Mustang driver to pit for a tire change. Though fifth in class at the checkered flag, Ken was promoted to podium P3 when the results were revised.

Ken was unaware of his impending promotion to the podium when we spoke to him after the race, "I started P13 after a poor qualifying and was really disappointed for the guys, so I had to work hard. We had a clean race so I'll take it. It was a great battle with some guys out there. We lost our brakes, not completely, but it was really sketchy. I just had to pump the pedal all race long but it beats going into the pit and giving up!"

It certainly does Ken. Congratulations on a great weekend and a job well done. Download the new Trans Am App and watch the race events live from the Google PlayStore or Apple.

Learn more about the Showtime Motorsports team partner, Franklin Road Apparel, at franklinroad.com and keep up to date with the Trans Am Series presented by Pirelli at gotransam.com. #GoTransAm