With the sun setting in the background, Cameron Lawrence made a pass to the outside of Skeen in Turn 3 to take the lead in a late restart with only two laps remaining. Undeterred, Skeen fought back and regained the lead in Turn 7, and went on to win by 0.867-seconds in the No. 77 LiquiMoly/Turn 14 Distribution Chevrolet Camaro.

The victory marked Skeen’s fifth win of the season. He now has an insurmountable 57-point lead (unofficially) over Rafa Matos, who finished third. This would be the second-consecutive title for
Team owner Joe Stevens, who also won last year with Marc Miller. 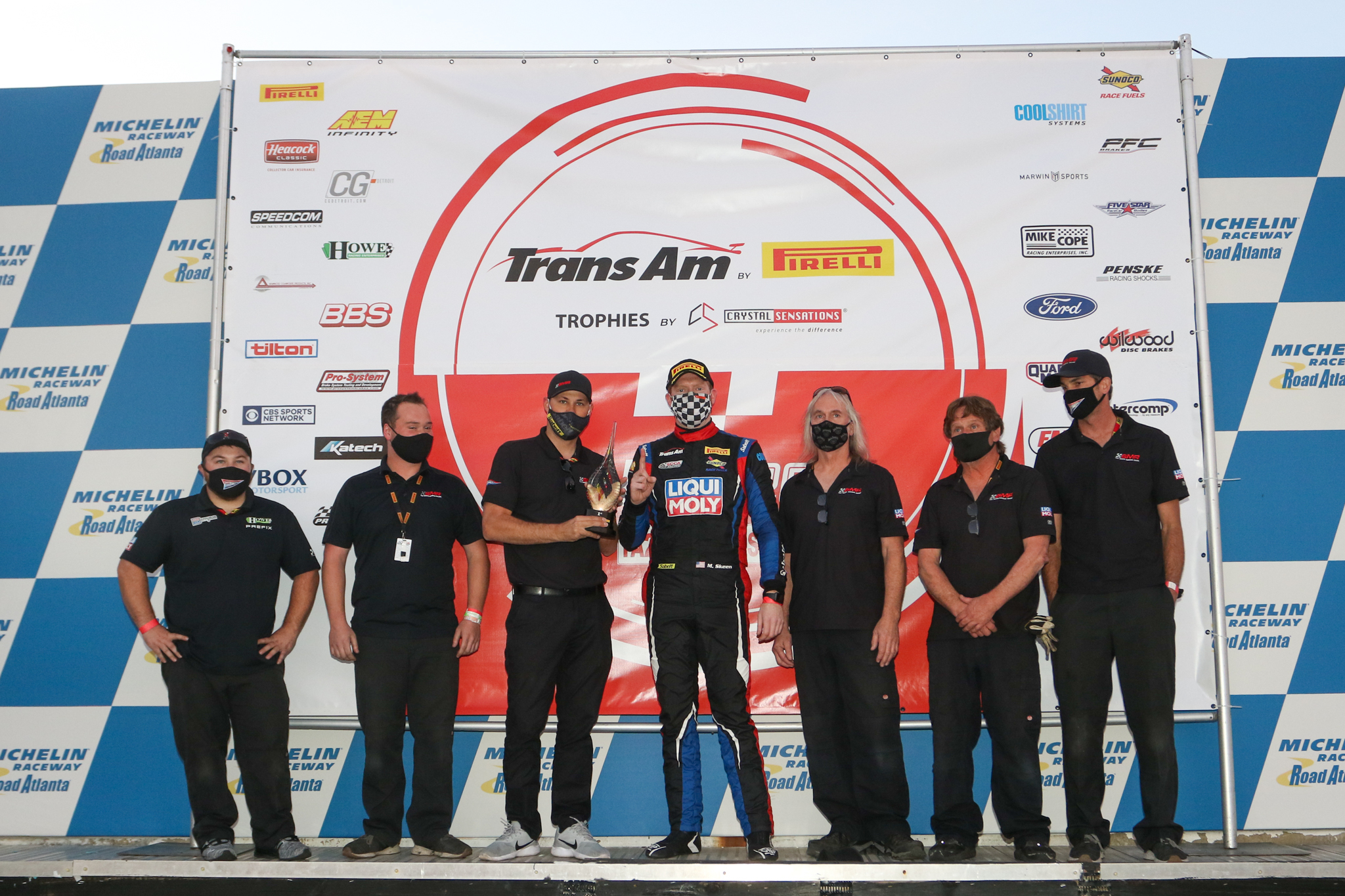 The nine-race campaign comes to a close at noon ET on Sunday with a 100-mile race for all five Trans Am classes. Skeen will start from the TA2® pole by virtue of scoring the fastest race lap of 1:25-159-seconds.

“That thing felt like it would never end,” Skeen said, after having to make three restarts following yellow flag periods. “I had an awesome LiquiMolly car from Stevens-Miller car. Like they’ve done all year, they’ve given me a fantastic piece. It’s been an awesome weekend. We’ve had incredible piece all weekend long, but I was afraid I’d get jumped on one of the late restarts. Cameron had a killer run on that last one, and I thought it was over. I didn’t want to fight him too hard into Turn 1, but he had a little mistake in Turn 7 and I was able to slip by again. That puts an exclamation point on the championship!”

Lawrence finished second in the No. 8 3-Dimensional Services Ford Mustang.

"The 3-Dimensional Services Peterson Racing guys gave me a great car," Lawrence said. "We were disappointed with where we qualified yesterday. We knew we had a car that could run up front, but it's good when you're disappointed with fourth place in qualifying when you have such good guys in front of you. The guys made some awesome changes. It's been a fun year, crazy it's almost over. We are going to give it one more go tomorrow to see if we can get one more step higher on the podium."

Matos ran second for the opening seven laps before losing the position to Lawrence, with TA2® rookie Franklin Futrelle getting by on a restart six laps later. Matos held on, regaining the podium on the late-race restart.

"Today was one of the hardest races I've ever raced in my life," Matos said. "Those guys were pushing me to the edge. Hats off to my team, Silver Hare Racing, for once again making it happen. These guys gave me a car to fight for the championship and I truly appreciate that. It's been a fantastic year, and hopefully next year will bring bigger and better things." 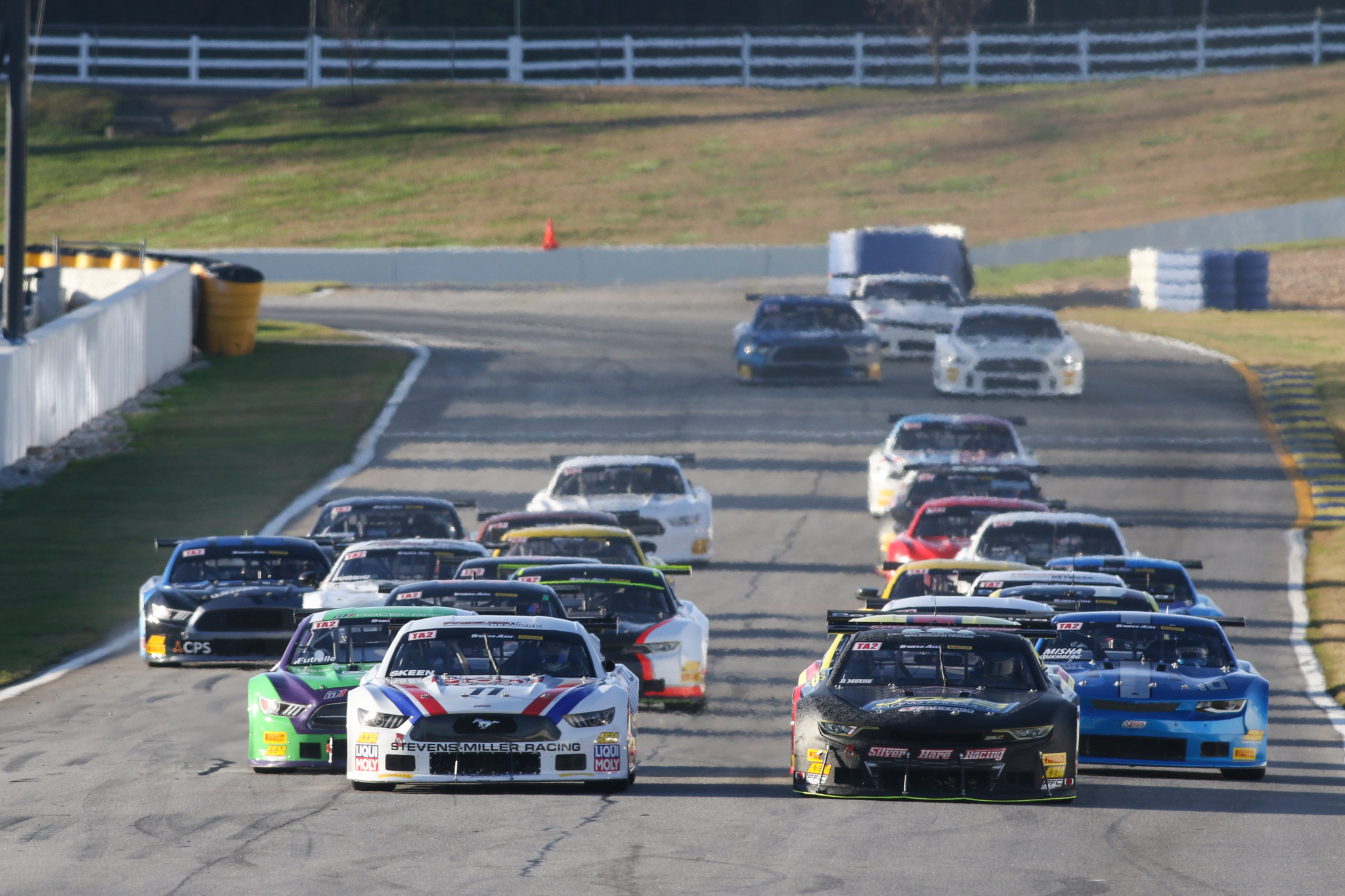 Futrelle took fifth in his TA2® debut, driving the No. 58 B2 Motorsports Ford Mustang. Futrelle made impressive passes to the outside of both Lawrence and Matos, and ran as high as second before Lawrence managed to get by. Futrelle then lost a podium finish on the final restart, and was shuffled back another position on the final lap.

A veteran of open-wheel competition – winning the 2008 Formula Renault SCCA National Championship – Futrelle took the last five years off to concentrate on his business.

“Covid was driving me crazy, so I came back,” said the driver from Augusta, GA, who was cheered on by 40 friends and family members. “It’s beyond our expectations to have the race that we did-- the top 10 guys in this field are incredible. This is all new to us. We’ve never even run a whole fuel load through the car and we knew there would be adversity that I am not used to as far as endurance racing goes in terms of brake fade and managing tire wear. I only see us getting better from here. There were a couple of lapped cars between us at the restart which was kind of strange, but that’s what they said it was going to be in the driver meeting so it is what it is. We will learn from it and see if we can get a couple notches up next time and be on the podium.”

Another great drive was turned in by Keith Prociuk, who came from the back of the field and finished sixth in the No. 9 HP Tuners /Mike Cope Race Cars Ford Mustang. He missed the most recent event at Circuit of The Americas due to a migraine on race day.

Doug Peterson was the Masters winner, placing seventh in the No. 87 3-Dimensional Services Group Ford Mustang.

Up-and-coming NASCAR driver Connor Mosack was running sixth in the No. 96 M1 Racecars Camaro, but pulled off in the closing laps due to overheating. 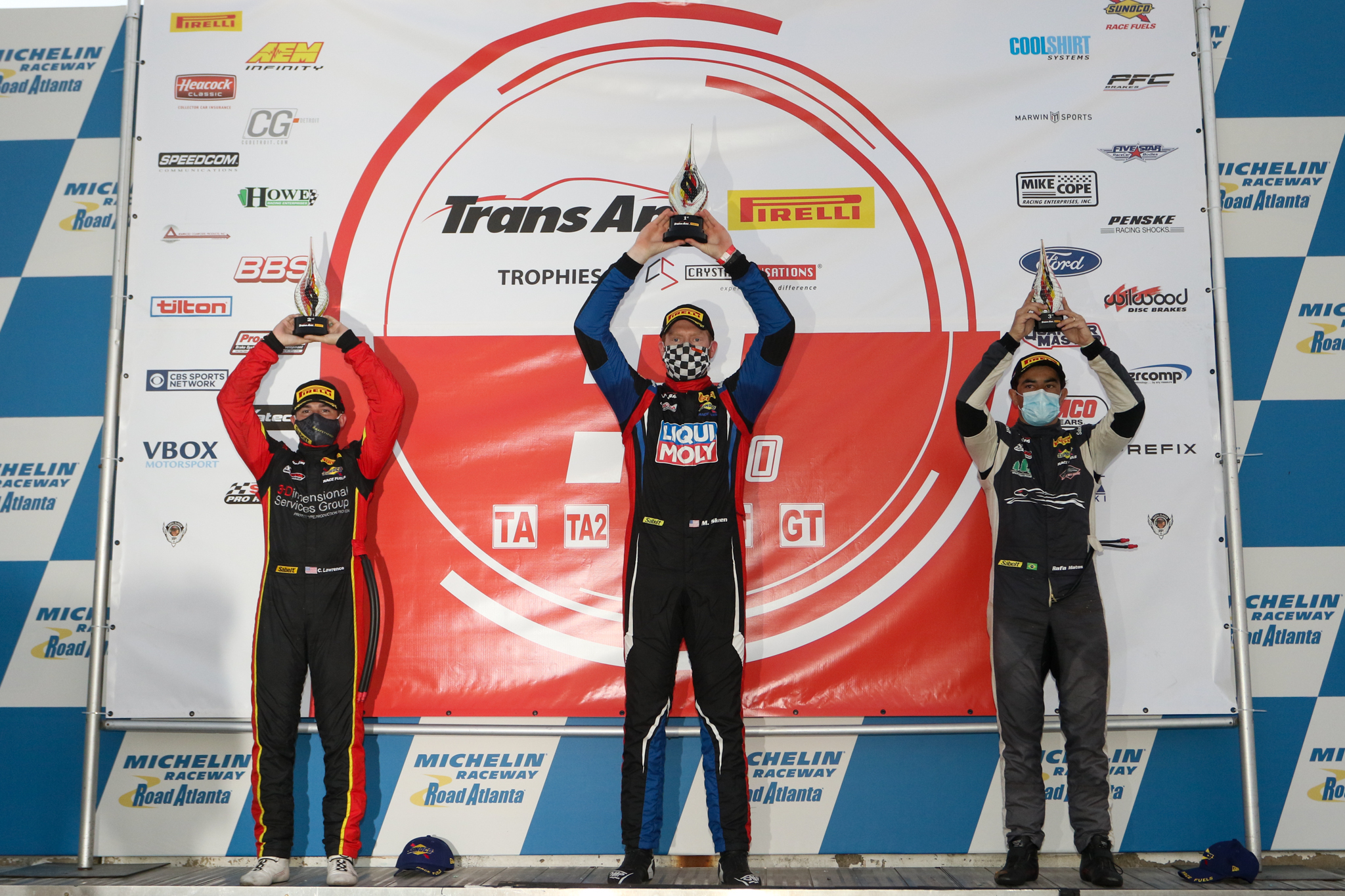 TA West contender Michelle Abbate finished 15th in her National debut in the No. 20 BC Race Cars Camaro.

NASCAR Hall of Famer Ray Evernham made his Trans Am debut in the No. 26 Mike Cope Race Cars Ford Mustang and ran as high as 23rd.

Download the Trans Am by Pirelli Racing App to live stream Sunday’s 40-lap race that starts at noon ET    https://nagrasports.app.link/lIQjdAuxq7.