One More Step to the Top: Dyson Aims for 2020 Trans Am Title

POUGHKEEPSIE, NY (February 26, 2020) — Three, Two, One! That’s the cadence Chris Dyson is looking for as he guns his #20 Plaid Ford Mustang for the 2020 Trans Am Series championship, starting at this weekend's season-opening hundred-mile sprint at Florida’s Sebring International Raceway. In 2018 Dyson captured rookie-of-the-year honors on his way to third place in the final point standing and then was a close runner-up for the championship last season.

With three TA-class race victories – Lime Rock Park, the Indianapolis Motor Speedway and season finale at Daytona – plus a quartet of second-place finishes in the 10-race 2019 season, Dyson battled Ernie Francis, Jr. for the championship through the last lap of the year. In the end, it was mechanical issues in the three races where he didn’t finish first or second that cost Dyson the championship.

“Last year we had all the speed and performance we needed to win the title,” Dyson said. “There were a couple of small reliability issues and in a series that is as competitive as the Trans Am, that’s the difference between winning a championship and not. We’ve got a great crew and over the winter we focused on making the car as bulletproof as possible. The competition in the Trans Am gets tougher every year – not just Ernie, everyone – but our preseason testing has gone really well and I’m confident we have everything in place to win the championship in 2020.”

Pre-season testing has gone well, according to Dyson. “We’ve done a lot of laps recently. We have not taken any big development swings this winter, and we have really focused on all the fundamentals, with the big focus on consistent reliability.  The car and our team are ready for Sebring this weekend and for the season to come.” 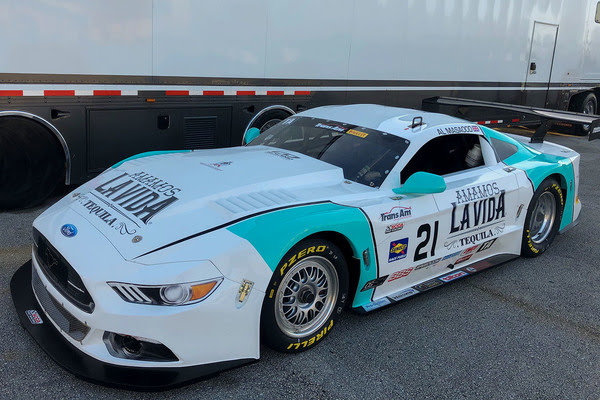 CD Racing is fielding a second car for the 2020 season, the #21 Ford Mustang that is sponsored by Amamos La Vida Tequila and driven by Humaid Al Masaood.

The winner of the 2011 Grand Prix of Baltimore IMSA race in a Dyson Racing Team entry, Masaood last year drove the second CD Racing Mustang in the Daytona finale, scoring a top 10 finish.

"Humaid and I have been friends for many years and I’m happy we’re working together again. It is a thrill to have him back with us and also to be adding another team car to the Trans Am Series.” said Dyson. “Humaid has done well in testing, including earlier this week. He has always been a quick study, and I expect he will be up to speed and running at the front of the field as this year progresses.”

"I am delighted to be back with Chris and the team," Masaood said. "The cars racing in the Trans Am Series are amazing and I am excited to showcase our sponsors here this year."

Trans Am TA-class qualifying begins at 5:00 p.m. Saturday while the hundred-mile feature race takes the green flag at 11:10 a.m. Sunday.

Headquartered in Atlanta, Plaid Enterprises, Inc. is one of the world's largest, most diverse manufacturers of creative do-it-yourself products. Plaid’s product innovation and dedication to the ever-changing needs of consumers have made the Plaid family of products among the most recognized and desired brands worldwide.

Founded in 1976, Plaid began as a publisher of how-to craft books. The company soon expanded into manufacturing, with paint becoming the primary focus. Today, Plaid is the industry's leading small batch paint manufacturer, proudly producing paint in its facilities located outside of Atlanta, GA.

Notable brands in Plaid's portfolio include FolkArt, Apple Barrel, Delta, Bucilla, Martha Stewart Crafts, and one of the industry's best known, Mod Podge, a favorite since 1967.

Amamos La Vida, We Love Life! Produced by one of the most awarded tequila distilleries in Mexico, this international-award-winning tequila is being introduced to the US market in 2020.

All varieties of Amamos La Vida Tequila are created using traditional methods of manufacturing, acquiring the best agaves from the region of Tequila and the highlands and lowlands of Jalisco, and then combining the baking processes of both traditional ovens covered in stone masonry and autoclaves. The Distillery’s combined experience of 72 years means La Vida’s ultra-smooth taste will impress both new and experienced tequila drinkers.

Leaving you with only one thing to say, We Love Life!!!