For points leader Boden, Super GT is a perfect fit 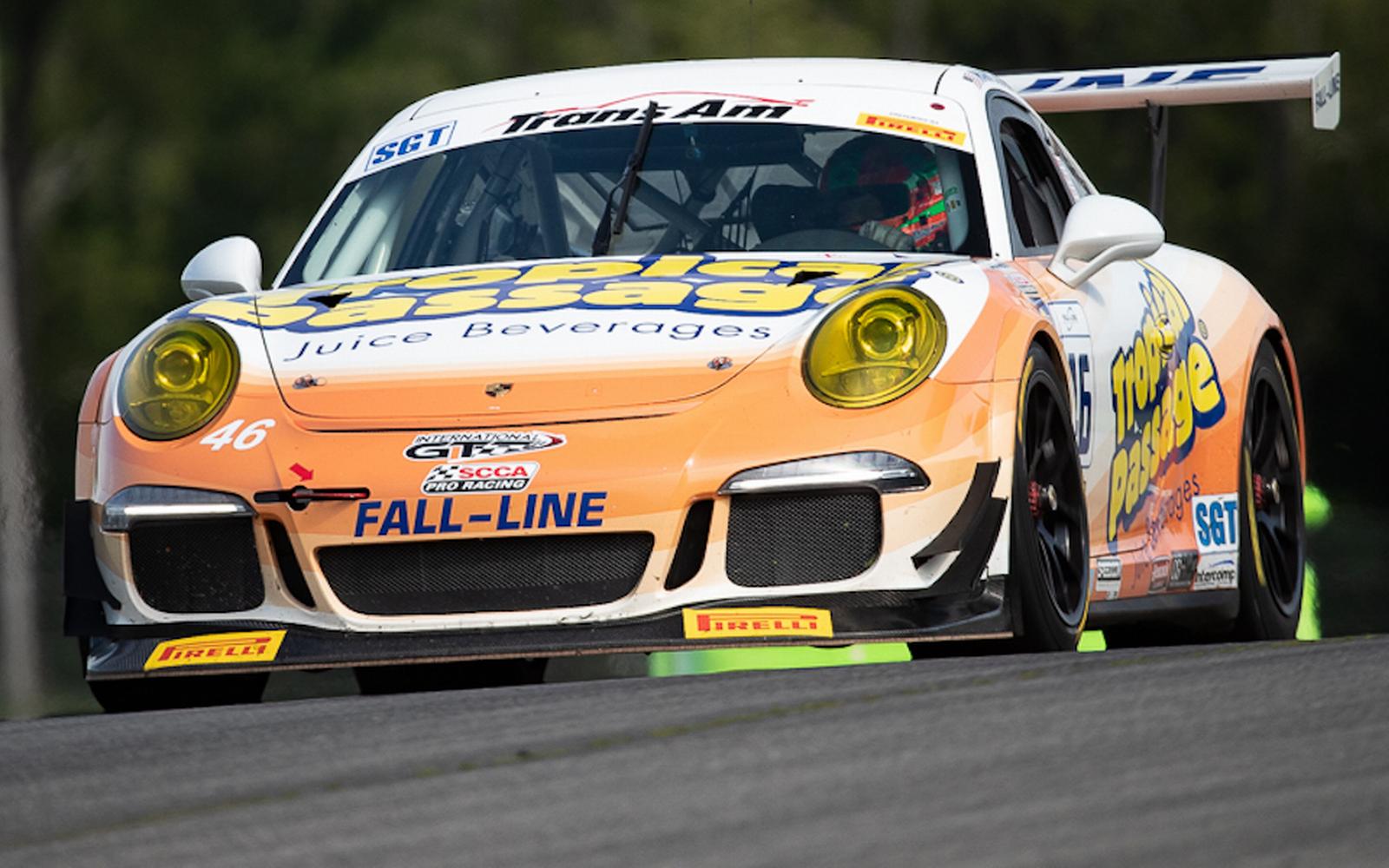 Mark Boden has been dominating the Super GT class in this year’s Trans Am Series presented by Pirelli, winning two races and finishing off the podium only once in his No. 46 Tropical Passage Porsche 991 GT3 Cup. He is leading the SGT points by a comfortable margin and looks poised to repeat the title he won in 2017 in TA3.

For Boden and his teammates/customers, Trans-Am has proven to be a great fit.

“I think at this point in my career, along with Tim Kezman and Tom Herb, I personally don’t have the appetite for — not only the budget, but also the politics in — other series,” Boden explains. “The Trans-Am Series offers a really nice schedule — most of

the race weekends are three days; it offers great tracks — some of the best tracks in the country; and it’s a lot of fun.

Boden runs Fall-Line Racing, supporting customers in a variety of series in addition to the Trans Am. Some of his customers race in the SVRA’s International GT series, which often gives them a chance to double up on track time during Trans Am weekends. FLR will also be supporting 14 cars at the SCCA National Championship Runoffs in a few weeks, and has a hand in several Ferrari Challenge programs.

For Boden, who started racing at 32, it’s been a pretty big escalation from hobby to thriving business. Interestingly, his love for speed started being powered by gravity rather than internal combustion engines.

“Fall-Line is actually a ski-racing term. In my past, before I was involved in auto racing, I was involved in ski racing. When I first started driving race cars, I didn’t have access to professional coaching, so I would show up at the track, look at it, drive around and think, ‘How would I approach this corner if I were on skis?’ Being on skis and being in a race car is very similar, with the weight transfer and what you’re doing; so I would always think, ‘I’m going to drive the fall line,’” he says, referring to the term that describes the most direct route down the mountain.

“When I took the next step and decided to build a business out of this, it was the natural name.”

Boden and his customers typically race German cars: Boden will race a BMW M3 at the Runoffs; Herb competes in SGT in a 911 GT3 Cup; and Kezman has been in a GT3 Cup car but has also tried out an early Audi R8 GT3 car. Fall-Line has experimented in other areas, but keeps coming back to what it knows.

“We’ve all been big fans of Porsche. Last year we dabbled a little bit into TA2, which I think is a great class; but it’s just not for us. You’re trading in a scalpel for a sledgehammer. When you’re used to working with a scalpel, a sledgehammer isn’t necessarily the direction you need to go.

“The Porsches are just great cars. They’re very low maintenance, they’re very cost-effective to run, they just go out there and hammer off laps. They’re very tunable and they’re a blast to drive,” he says.

With their love of Porsches, the desire to have fun racing while still taking it seriously and to want to race at a high level of competition without some of the drama that sometimes comes with it, has made SGT and the Trans Am Series the right place for Boden and his teammates.

Trans Am SGT points leader Boden has two wins this year, most recently at tough Mid-Ohio.

“Trans Am is really designed around, for the most part, the very high level gentleman driver,” explains Boden. “We’re not out there racing against the top pros in the world. I travel upwards of 350,000 miles a year in another business; Tim runs a business and Tom runs a business. We can show up here and enjoy a fun weekend of racing, We’re very serious about it and we’re out here to run our best; we have a great team and we work really hard at it. But we’re not out fighting the politics and trying to compete at a level that we just don’t need to compete at at this point in our lives. It works out very well for us.”