Tony Ave second in return to TA2, Trans Am, action 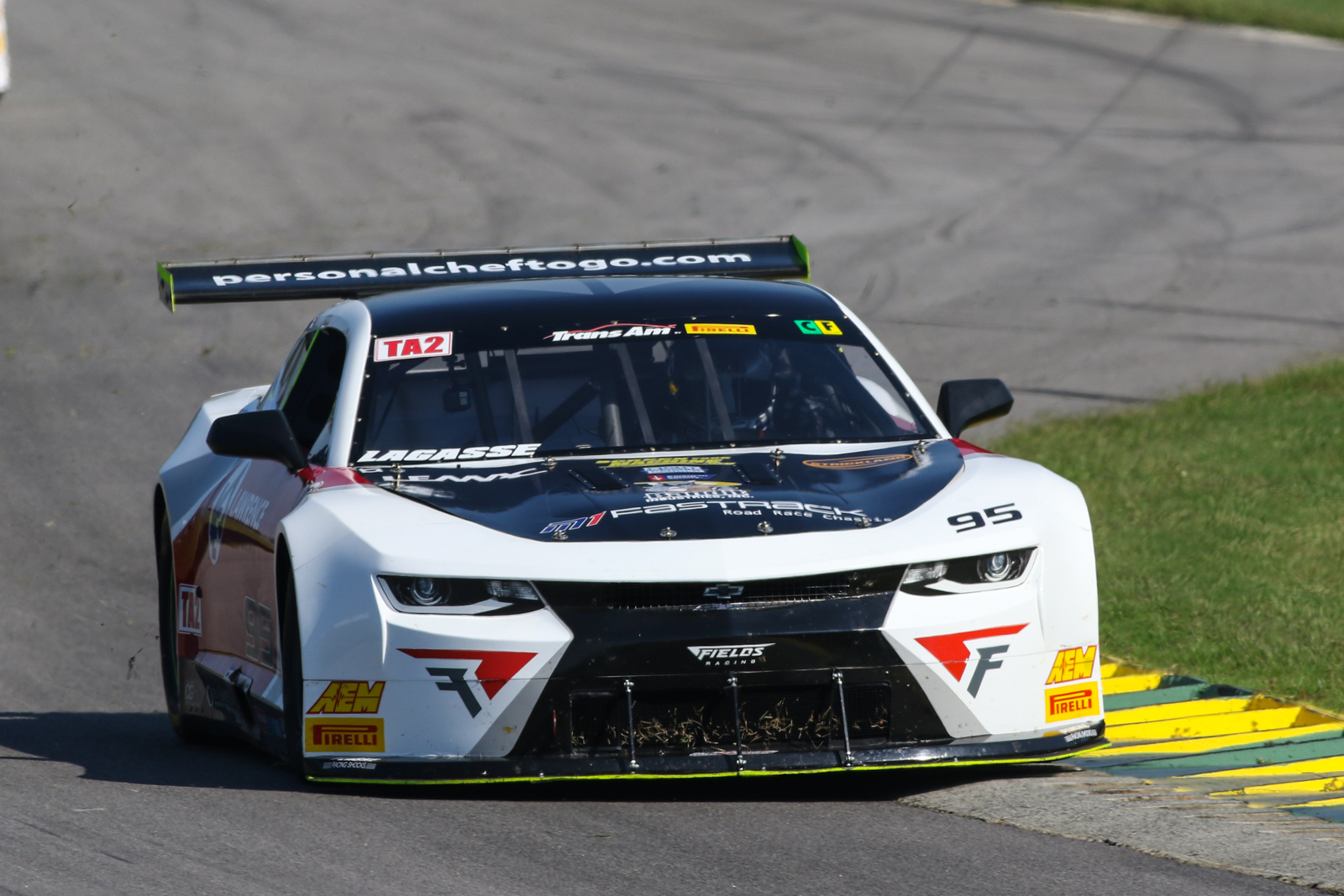 ALTON, Va. [September 22, 2018] — Following the Trans Am Series presented by Pirelli’s VIR Muscle Car Challenge at Virginia International Raceway both Scott Lagasse, Jr., and Rafa Matos had cause to celebrate.  Lagasse had just captured the first TA2 class victory of his career and Matos, by way of a third place finish, had secured the 2018 Trans Am TA2 Championship.

Lagasse’s victory in the No. 95 SLR/Lawrence Equipment/ M1 Fastrack Chevrolet Camaro was twinged with a touch of redemption, following a heartbreaking power failure at Watkins Glen while in the lead.  While the No. 95 started the day from pole position, his second consecutive, Lagasse’s race was anything but straightforward.

Lagasse would undergo heavy pressure from Tony Ave, 2010 and 2011 TA class champion in the No. 25 BC Race Cars Chevrolet Camaro, over the first four laps of the 31-lapcontest, before going off course on lap five, allowing both Ave and Matos, in the No. 88 3-Dimensional Services Group Chevrolet, past.

Lagasse would return the favor on lap 10, over taking Ave, then running second, and settling into pursuit of race leader Matos.  The race would then go under a full-course caution spanning laps 15 through 18 for excessive debris, mainly grass, on the VIR circuit.  The ensuing restart would provide Lagasse the opportunity he needed.  The No. 95 would shoot to the inside of the front straight, overtaking Matos on the entrance to turn one, with Ave following suit.

Over the final ten laps, Lagasse would withstand heavy pressure from Ave, who was likewise hounded by Matos; but their running order would remain unchanged as the trio crossed the checkered flag.

For Lagasse, after seeing victories denied at Watkins Glen and Indianapolis Motor Speedway, a somewhat elusive TA2 victory was finally his in a contest that marked his 14th career Trans Am start and fourth podium finish, all of which have come this season.  Lagasse’s win in the No. 95 also marked a first for the M1 Fastrack Chassis.

“I feel like we’ve had a couple slip on us that nobody noticed,” said Lagasse.  “It made our team mad, work hard.  After that I was convinced I was just going to run qualifying laps all day long.  I was going to make mistakes and I’m going to continue to make mistakes, but I’m going to get better and make less of them.  I did that today.  I didn’t have a ton left at the end, but I thought if I got a big enough lead I’d be ok— and I was.”

Not previously a road racer by trade, Lagasse arrives at Trans Am a veteran of the stock car ranks with starts across NASCAR Xfinity, Trucks and ARCA—but help from his team and father, Scott Lagasse, Sr., ha seen him grow by leaps and bounds throughout the year.

“Man this is a cool series,” said Lagasse.  “This is big for me.  I’m not a road racer.  I grew up around it watching my dad win everything there was and going everywhere, so to do this with him is special.  He’s such an asset; there are some guys who go fast, there are some who understand how to go fast… and then there are guys who can explain it and make guys better— my dad, he’s for sure one of those.  What the series provides here; I’m shocked and impressed with what they’ve done here to have Terry Earwood available, to bring him and Dorsey Schroder here and let rookie drivers lean on them and learn—it says leaps and bounds about Trans Am.  It’s a special day for sure, and to have Lawrence Equipment on board for a win in their first race— that’s really cool.”

Ave’s second place finish marked an astonishing 34th podium appearance in the Trans Am Series in his 97th start; it was also the second consecutive podium finish for the BC Race Cars team.  The contest was only Ave’s second appearance in TA2 of the season, third over the last two years. 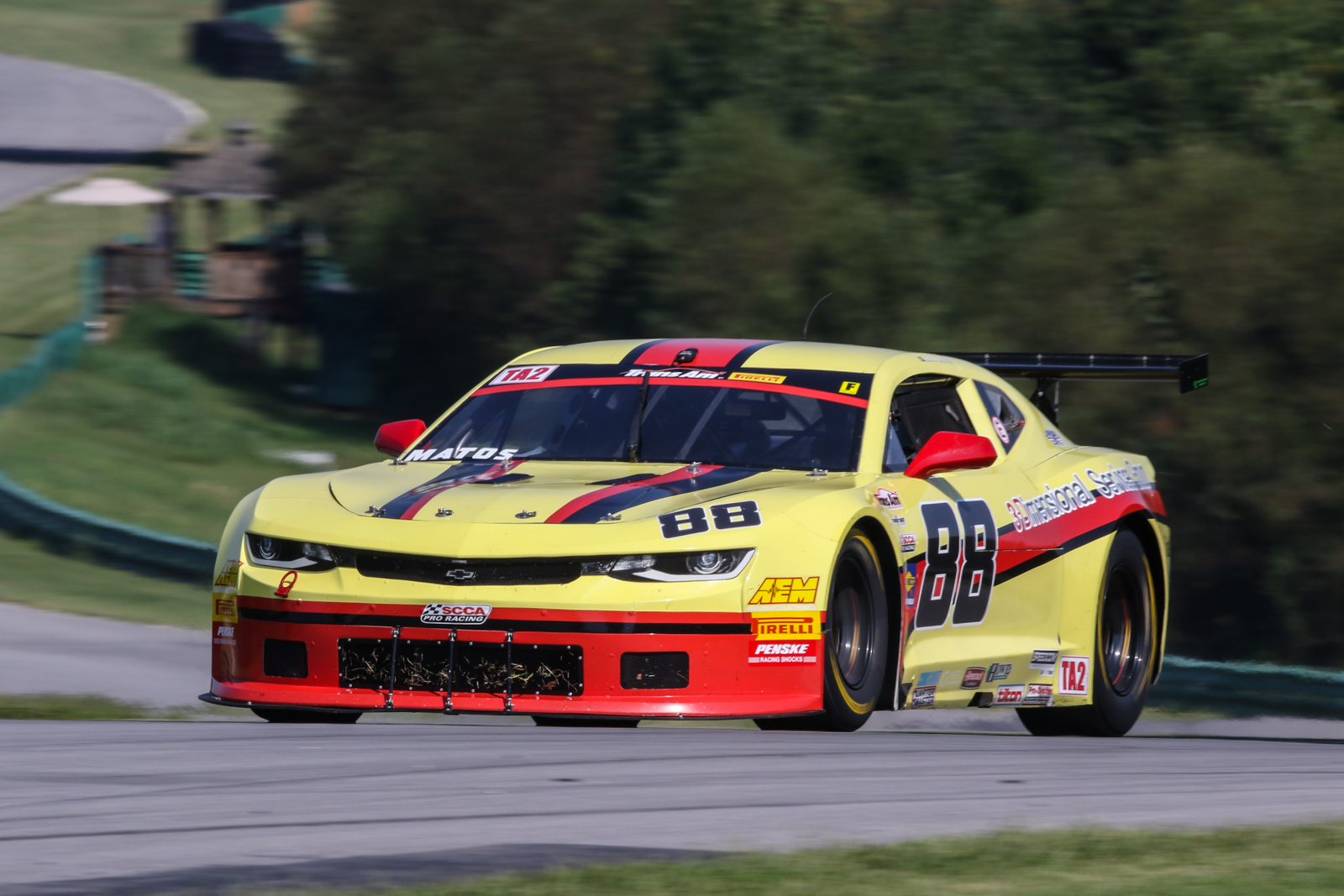 Celebrations continued in victory circle for Rafa Matos and the No. 88, as his third place finish clinched the TA2 championship with two rounds of competition remaining.  The championship comes nearly ten years after Matos captured his last, the 2008 Firestone Indy Lights title.

“It’s been a year of ups and downs,” said Matos.  “Some races we thought we had things covered and then we ended up having to work our way back and recover.  I came this weekend thinking about scoring points, not clinching the championship.  But luck was on our side again. But I’ve been thinking about who I have to thank for this beautiful year, certainly Doug Peterson and his unconditional support to our team Coleman Motorsports and his company 3-Dimensional Services Group.  They provide enormous support to the series and our team; if I can do a little bit for him and his company, I feel like the mission is accomplished.  This championship is for him.  Then the team, those guys are flawless and work so hard.  Whatever it takes to make me feel comfortable, they’ll do it—they’re champions.”

Matos had his first taste of TA2 competition over a year ago, when he was brought in to field Peterson’s car in the 3-Dimensional Services Muscle Car Challenge at the Chevrolet Detroit Grand Prix presented by Lear, where he finished second.  Now, after a season that saw Matos and the No. 88 capture five victories and eight podium finishes, he is a Trans Am champion.

“When Doug Perterson called me a year and a half ago and invited me to drive his car at Detroit,” said Matos, “we had a test at Sebring and I blew up the gear box within five laps. And I said ‘I’m not sure my driving style fits with this car,’ but he encouraged me to keep going.  We raced at Detroit and almost won the race and from then on I became part of the family.  I feel that we can certainly build on bigger and better things for the future.”

The TA2 top five also featured Louis-Philippe Montour, in the No. 13 3-Dimensional Services Chevrolet Camaro, tying a season best and Ethan Wilson, in the No. 49 Berryman/ Prefix Dodge Challenger, capturing his second top-five finish of the season, firmly in the driver’s seat for Rookie of the Year honors.

The Trans Am Series presented by Pirelli will hold the VIR Trans Am 100, featuring the TA and TA3 classes, later today at 5:35 PM ET while the TA2 class will return to action at Circuit of The Americas, Trans Am’s penultimate round, November 1-4.

Fans can keep up with the Trans Am Series presented by Pirelli at www.gotransam.com, on Facebook at facebook.com/gotransam and on Twitter at @gotransam. 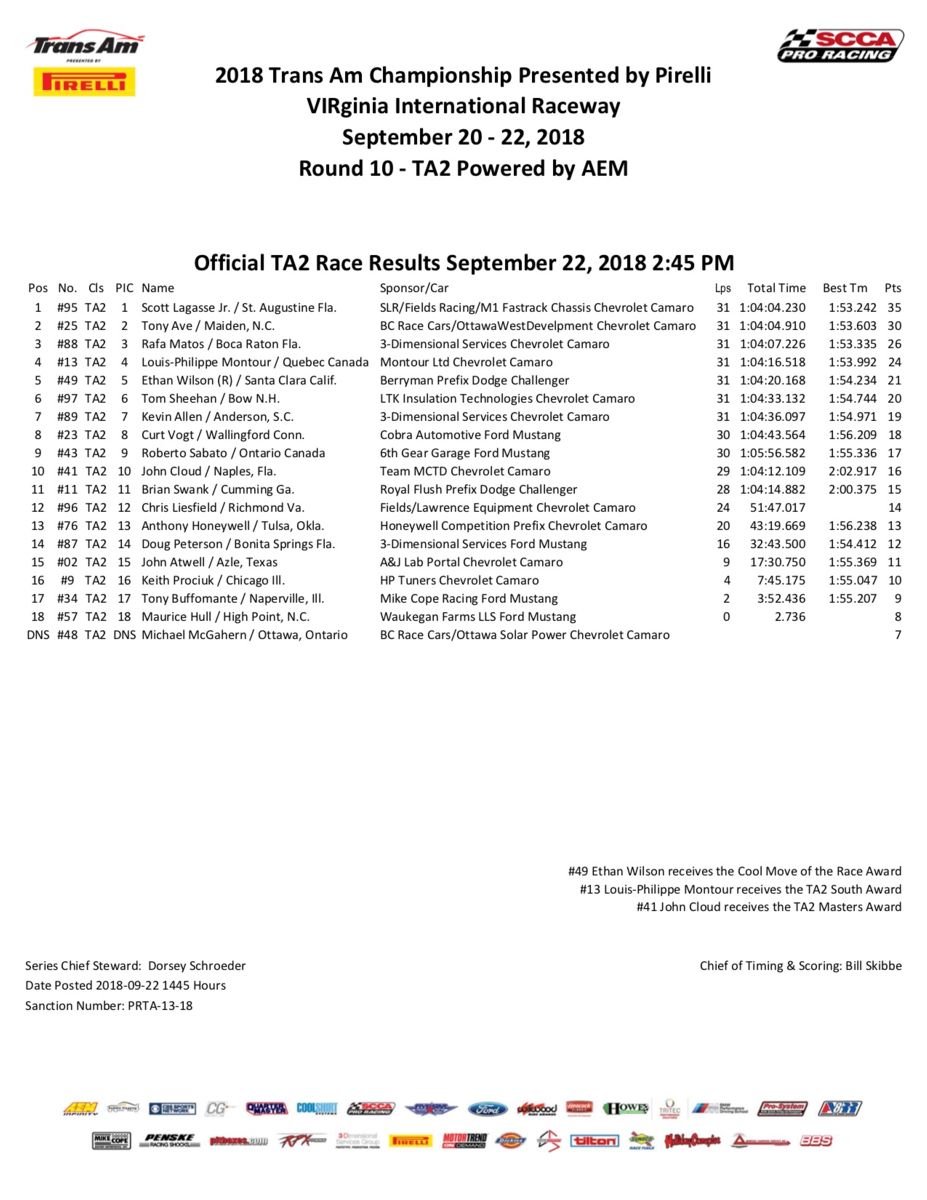