Ragginger charges from the back, Boden and Kleeman secure production wins

For Ernie Francis, Jr., in the No. 98 Buoniconti Fund Ford Mustang, the win marks his fifth victory in seven competitions this season and the 28th of his Trans Am career across all classes while furthering his lead atop the TA class points.  While the No. 98 spent much of the weekend under the wrench with engine issues, Francis began the race on pole after yesterday’s qualifying sessions were cancelled, leaving the grid to be determined by points.

Francis endured early pressure from two-time defending champion Amy Ruman, in the No. 23 McNichols Company Chevrolet Corvette, and late pressure from TA class debutant Martin Ragginger, in the No. 50 GoShare/Axalta Chevrolet Camaro, particularly on a final restart with only three laps to go.

“At the beginning of the race we were just trying to get our temperatures up and try and get some speed out of the car,” said Francis.  “We struggled with that over the first few laps; once I got my head down we ran some consistent laps and built up a gap.  The yellow flag came out when we didn’t want it; then Martin got on our tail again.  We weren’t able to pull a gap, it was tough; Martin definitely had some power on us down the straights.  We tried to nail the exits, build up an air gap— and were able to bring it home for another win.”

“The crew did a great job this weekend,” continued Francis.  “We didn’t even get the engine into the car until late last night and didn’t have the car ready until about two hours before this race.  Katech did a great job rebuilding our motor all of yesterday; it was a group effort by the team and our sponsors this weekend— I can’t thank them enough.”

Ragginger would finish the race second, after moving his way up from 14th, and last, starting position to second over the initial 15 laps.   Even with several full-course cautions, Ragginger came up just short with Francis able to distance himself and fend off a final charge on the last two laps. Francis set his fast lap of the race, a new track record, during that span to the tune of 1:22.236.   Ragginger was awarded the COOLSHIRT Systems Cool Move of the Race for his charge from the back to the front. 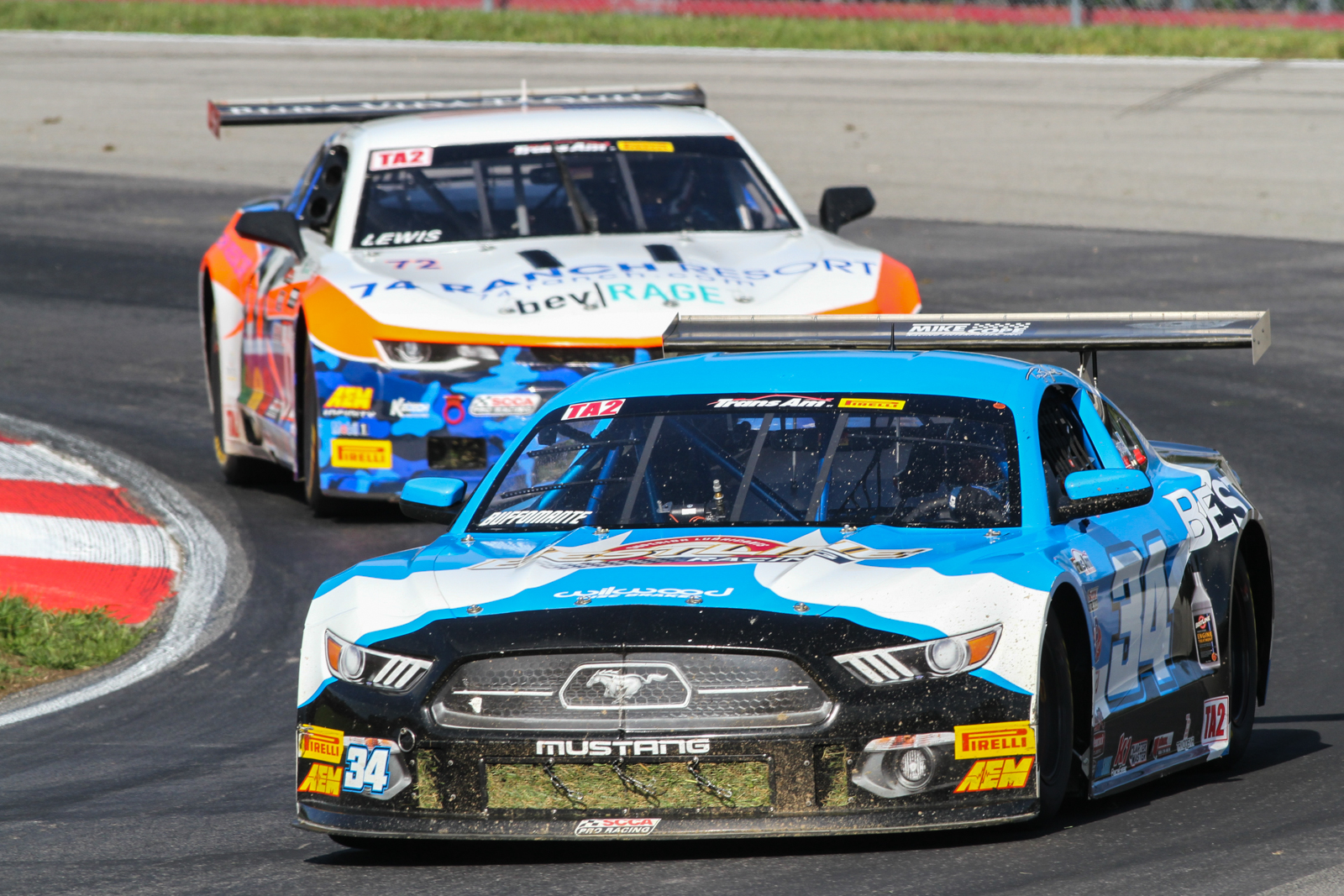 In the earlier FirstEnergy Muscle Car Challenge, TA2 defending champion Tony Buffomante, in the No. 34 Best Line Superior Lubricants Ford Mustang, captured his third victory of the year and second consecutive, finally securing the Mid-Ohio victory that had previously eluded him throughout his TA2 career.

“We knew we had a good car coming into the weekend,” said Buffomante.  “We were fast in some of the practice sessions.  This track is so heat sensitive; I think I got a little lucky racing in the morning.  We’re typically a little better when the track is cold.  We just kept working on the chassis, trying to find a way to get off the keyhole and carousel—that’s what you need here to be competitive.  Travis and Mike and everyone found a way.  The car handled great; after the final restart with Gar behind me, I knew I had to bust a couple strong laps and we ended up turning three to four low 1:25 laps in a row—when you can do that you know you have a great chassis underneath you.”

After a canceled qualifying the day before, Buffomante started fourth on a grid set by points and spent much of the race in a three-way battle with Dillon Machavern, in the No. 24 Heritage Motorsports Ford Mustang, and current points leader and pole-sitter Gar Robinson, in the No. 74 Pura Vida Tequila, 74 Ranch Resort Chevrolet Camaro.   The pivotal moment came on the second of three restarts, with Buffomante overtaking both Machavern and Robinson through the first few turns.

“On one of the restarts I think the guys in front of me were sleeping a little bit,” said Buffomante.  “I took the car on the outside of Dillon and just going into that keyhole; it’s a good passing zone—you just have to go in deep and see if you can make something happen.  I got hit in the back and half-spun and was able to recover and fortunately was able to save the car and get a pretty good drive off the corner.  It’s just TA2 racing.  It’s hard to pass; there are some great drivers here.”

Gar Robinson would finish second comfortably and was followed across the finish line by Cameron Lawrence, who provisionally finished third.  However, following technical inspection the No. 19 Class Auto Centers Chevrolet Camaro of Lawrence was excluded from the results for a technical infraction, Article 14.4.2, roof height.

Shane Lewis, in the No. 72 Pura Vida Tequila/ 74 Ranch Resort Chevrolet Camaro, would inherit third for his sixth podium finish of the year after battling back from a spin on lap 19 that saw him fall back to 15th position.   Lawrence Loshak, in the No. 5 Pennzoil/ ETE Reman Chevrolet Camaro, was awarded fourth while Rafa Matos, in his second Trans Am appearance in the No. 88 3-Dimensional Services Group Chevrolet Camaro, completed the top five.

Dillon Machavern, who ran the first half of the race in the top three and tied Buffomante for most laps led, would suffer a mechanical failure on lap 33, marking the second event in a row the No. 24’s race has been cut short by mechanical issues.

Buffomante’s pass on the restart would be awarded the COOLSHIRT Systems Cool Move of the Race; the No.34 of Buffomante also set the fast lap of the race, a 1:25.210, a new track record eclipsing the previous record of 1:26.889 set by Lawrence Loshak last year. 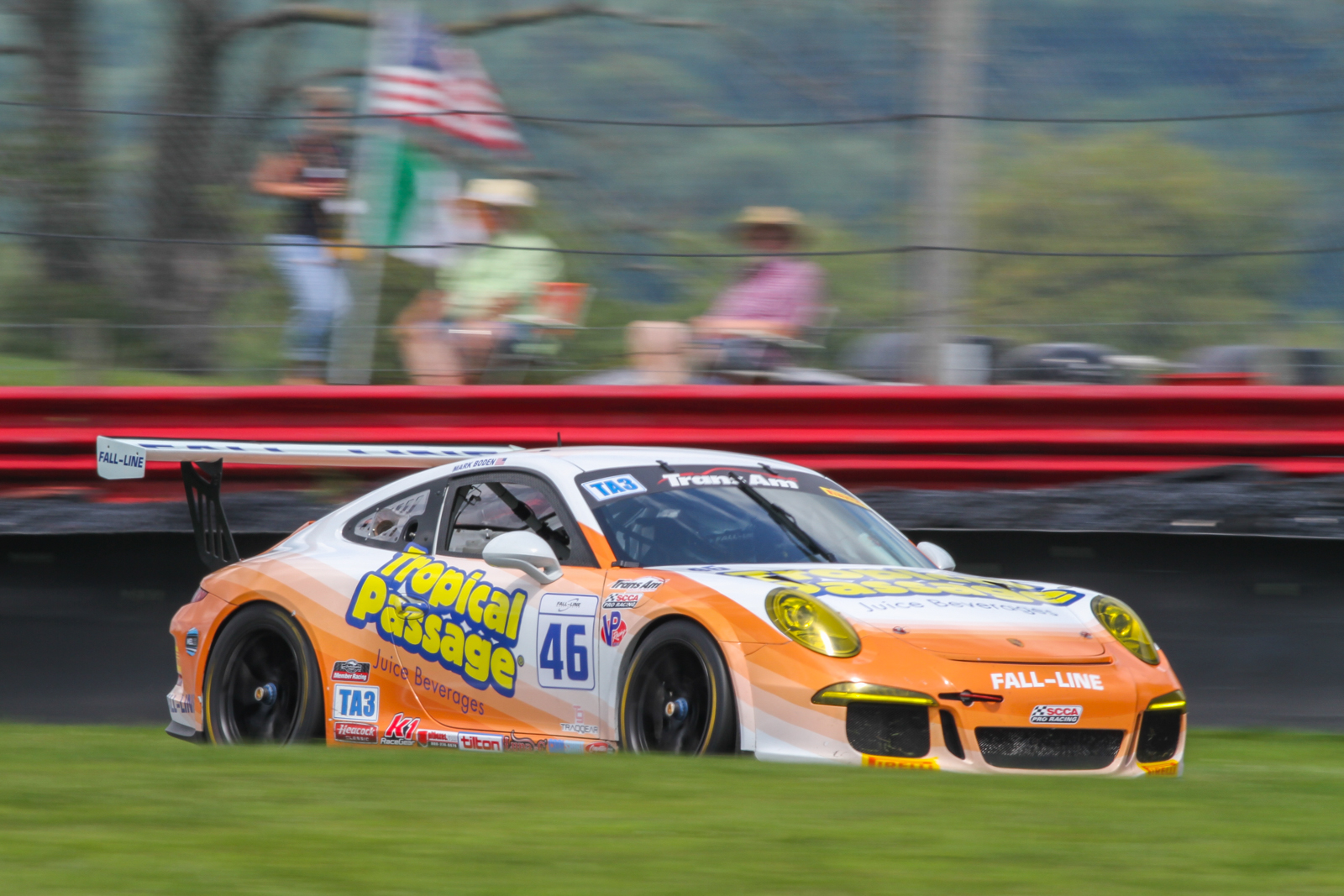 In the multi-class FirstEnergy 100, the TA3 class saw Mark Boden, in the no. 46 Fall-Line Motorsports Porsche 911 GT3, return to the top step of the production class’ podium for his third win of the season.   On the final restart, Boden was able to maintain his position despite a strong challenge from teammate Tim Kezman, in the No. 4 Fall-Line Motorsports Porsche 911 GT3, with the No. 95 Irish Mike’s Automotive Porsche 997 of Conor Flynn just behind.  Kezman nearly overtook Boden in turn two but went wide and partially off course but was able to maintain position.

“Tim and I, we race as teammates,” said Boden. “I trust him, he trusts me— that last restart when he came down into the keyhole I was looking left and expected him to be there, and he wasn’t.  I can’t wait to see his video, but it’s always great racing with him.  It’s too bad we had a smaller field and Randy (Kinsland) broke.  I know he’s struggling with some issues right now—it’s been two races in a row; so I’ve got a gap, but it’s a long season and anything can happen.”

Boden, Kezman and Flynn would cross the finish line in that order, with Boden finally opening up a sizeable points gap atop the charts after Randy Kinsland suffered yet another early exit as the No. 11 Kinsland Racing Chevrolet Corvette ended the day with a mechanical failure only five laps in.

In TA4, Brian Kleeman, in the No. 07 DWW Motorsports Ford Mustang, secured his fourth win of the year, completing a weekend that saw the DWW Motorsports team work relentlessly to replace the No. 07’s engine in time for the race—its first official on- track action of the weekend.

“Sometimes you have to explain to people that racing is a team sport,” said Kleeman. “All they see out there is the driver during the race, but we wouldn’t be out there without the team.   Not only did the crew perform a full-engine change for us; they had to make sure the car was ready for when we got on track.  Hats off to the DWW Motorsports team, Dave, Brandon, Justin, and David, Jr.; without them this wouldn’t have happened.”

For their efforts the DWW Motorsports team was named the PitBoxes.com Crew of the Race, while Brandon Cairns was named the TraqGear Crew Chief of the weekend.

Todd Napieralski, in the No. 39 Chevrolet Performance/ TREMEC Chevrolet  Camaro, would finish second for what was also his fourth podium finish of the season, keeping Kleeman within reach in the TA4 class standings.  JR Pesek, in the No. 10 Rennsport KC Ford Mustang, would finish third, his third podium appearance of the year and enough to move him up to third in the TA4 points.

The Trans Am Series presented by Pirelli will return to action next at Road America for Round 8 of the Trans Am Championship on August 26th.