BRASELTON, Ga.  [May 13, 2017] –  Tony Buffomante and Ernie Francis, Jr., captured wins in their respective Trans Am Series presented by Pirelli races today at Road Atlanta, Round 3 of the 2017 Trans Am Championship.   Also securing class wins on the day were Randy Kinsland in TA3 and Brian Kleeman in TA4, as Trans Am made its 22nd appearance on the iconic Georgia road course.

Ernie Francis, Jr., would capture his second consecutive win in the TA class from behind the wheel of the No. 98 Breathless Pro Racing/ Beta Tools Ford Mustang, following up on his first career TA class win at Homestead-Miami with another victory immediately thereafter.

However, unlike his near dominate performance at Homestead-Miami, Francis’s win in Atlanta would require more patience on the part of the 19-year old driver who spent the early stages of the race in pursuit of Justin Marks, in the No. 33 GoPro Motorplex Ford Mustang.   Marks, who started on pole, would suffer a mechanical issue that forced him into the pits on lap 12, eventually ending his race on the 25th lap.  Francis would assume the lead and retain it throughout a red flag restart, keeping two-time defending TA champion Amy Ruman, in the No. 23 McNichols Company Chevrolet Corvette, at bay.

“Justin was quick in the start,” said Francis.  “The same that Stanton (Barrett) was quick in qualifying at Homestead-Miami, but we thought that the setup Justin was running was just a little too fast to be running out at race pace.  We wanted to run consistently and keep him in sight and let him come back to us—we never really had the opportunity for that after he pulled into the pits but it made for a good race for us.  We got out front and powered down and just sent it.”

The event marks Francis’ third race in his No. 98 TA machine, and the former three-time TA4 champ believes he is now in sync with his car, even if he and the Breathless Team are eager to continue developing it.

“The car and I are pretty connected right now,” said Francis.  “I’m really understanding how to drive the car fast out there, we’re still working on setup—little things that could make a difference, a few braking issues but we’re faster every race and I have no doubt we’ll be out front at the start of the next one.”

Amy Ruman would finish second for her first podium of the season, continuing her podium streak at Road Atlanta, where she had won the previous two Trans Am races.  David Pintaric, in the No. 57 Kryderacing Cadillac CTS-V, would finish third to complete the TA podium. 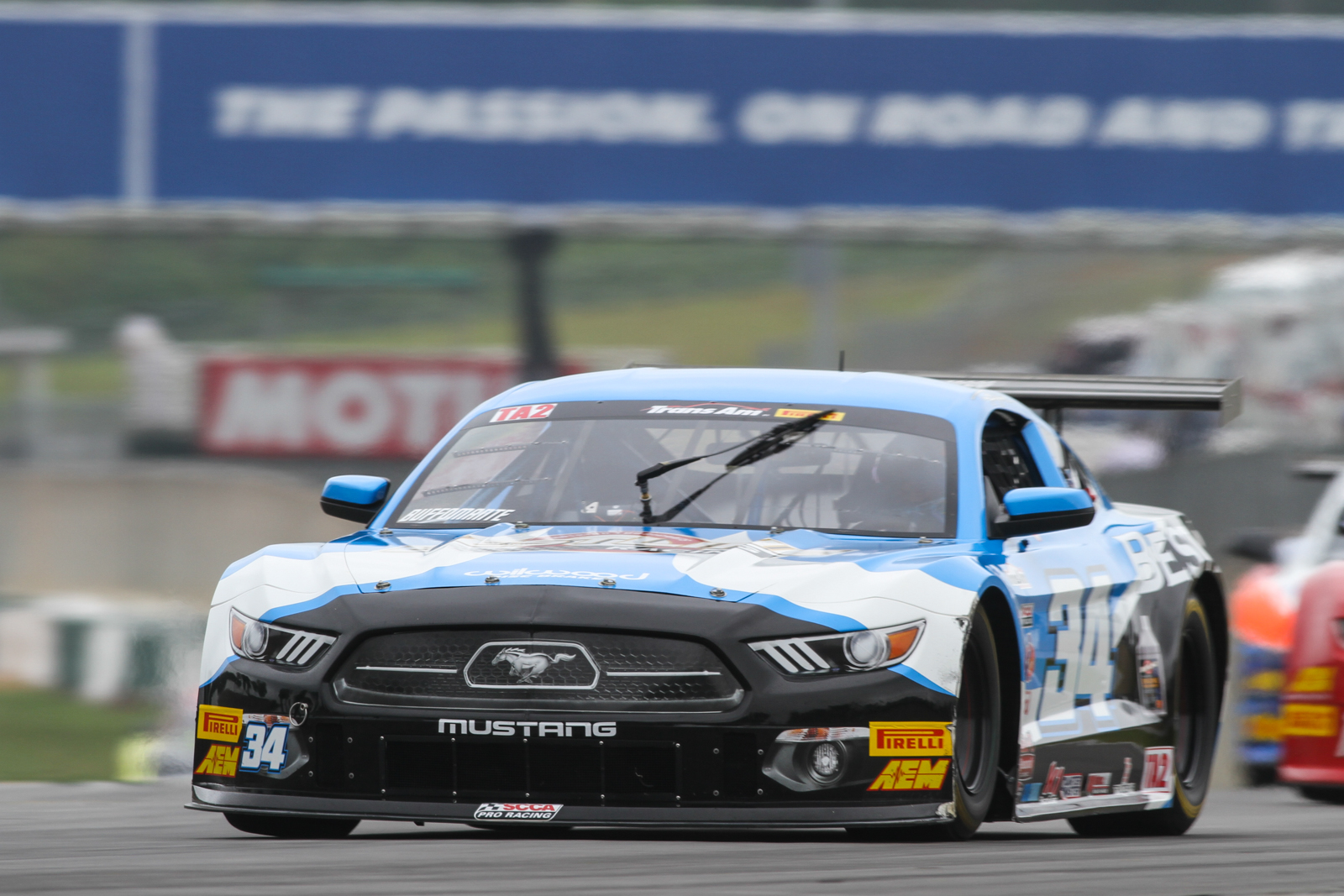 TA2 defending champion Tony Buffomante, in the No. 34 Bestline Superior Lubricants Ford Mustang, led the class for the entirety of its independent 101.6-mile race, fending off a strong challenge from Cameron Lawrence, in the No. 19 Class Auto Centers Chevrolet Camaro, in the final stretch to capture his first TA2 win of the 2017 Trans Am season.

“To win here so many things have to go right,” said Buffomante.  “Everything is just so competitive now. You’ve got tremendous drivers throughout the field.  It’s a long race, and while we had a couple yellows, it’s still a lot of laps, it’s a lot of miles, a lot of gearshifts, a lot of braking points— I probably wasn’t perfect today.  And that allowed the No. 19 to get closer in certain parts of the track. I knew we had the car where we needed it and I was just trying to ride it out and bring home the win.”

The race marked a return for Buffomante after sitting out Trans Am competition at Homestead-Miami, taking advantage of the opportunity to drop the results of one of the first five races of the championship, and his first full run on the new Pirelli P ZERO™ tire package as he and the Mike Cope team continue to refine his setup and strategy for the new year.

“I wanted to pedal a little bit,” said Buffomante, “but there was just too much pressure behind me to do that.  I think we’ll do a few things different setup-wise going forward now that I’ve learned what I’ve learned.  We definitely slowed down a little bit towards the end of the race, but it’s tough to pace anymore than we did with a full rear view mirror.  You’re trying to hit your marks and be smooth, it probably wasn’t my best driving performance but the car was so good that it carried me a little bit.”

The opportunity for a last gasp challenge from Lawrence on Buffomante never came to fruition.  The No. 19’s engine shut down on the backside of the course for reasons yet to be determined by the team.  Shane Lewis, in the No. 72 Pura Vida Tequila/ 74 Ranch Resort Chevrolet Camaro, crossed the finish line in second position for his third consecutive podium of the year, and seventh consecutive dating back to the end of the 2016 season.

Dillon Machavern, in the No. 24 Heritage Motorsports Ford Mustang also out of the Mike Cope tent, would complete the TA2 podium—also his third podium of the year, and fifth consecutive dating into 2016.   The finishing position sees Machavern retain his lead atop the points standings over Gar Robinson, in the No. 74 Pura Vida Tequila/ 74 Ranch Resort Chevrolet Camaro, who finished fourth.   Scott Lagasse, Jr., in the No. 17 Screen Your Machine Chevrolet Camaro, would complete the TA2 top five as the highest finishing rookie. 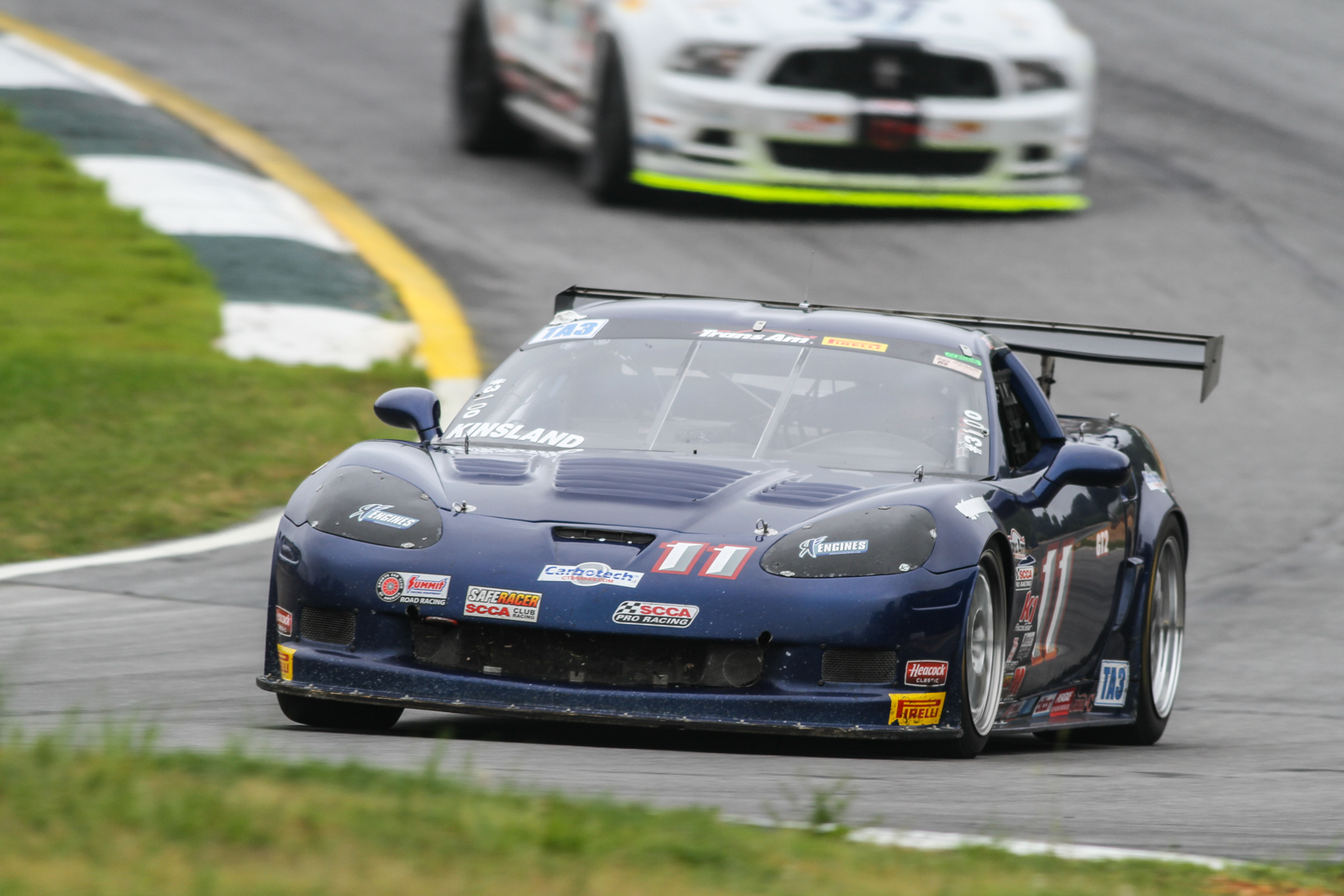 The TA3 and TA4 class would join the TA cars in their 101.6-mile multi-class race, with Randy Kinsland, in the No. 11 Kinsland Racing Chevrolet Corvette, and Brian Kleeman, in the No. 07 DWW Motorsports Ford Mustang, securing class victories in TA3 and TA4, respectively—mirroring the results of their efforts at Homestead-Miami in Round 2.

Kinsland was the victor of a three-way, race-long battle for the lead between himself, polesitter Conor Flynn, in the No. 95 Irish Mike’s Porsche 997, and Mark Boden, in the No. 46 Fall-Line Motorsports Calypso Porsche 995.   Kinsland would hold the lead for most of the second half, but a momentary lapse opened an opportunity for Flynn.

“After the restart there was a lot of gravel on the track,” said Kinsland.  “It was a little unpredictable out there.  Later on, I unfortunately got into Conor a little bit, I missed a gear on the restart and he got around me, and I was beside him when we went in and there was some contact.  I hate that.  It’s not the way I want to win a race.  But the racing was great out there.”

The win is the second of Kinsland’s career, he was joined on the TA3 podium by Mark Boden, who finished second. Ramin Abdolvahabi, in the No. 94 Irish Mike’s Automotive, would be awarded third post-tech after the No. 02 LSI/Sam Pierce Chevrolet Corvette of Larry Bailey was found to be underweight.  Conor Flynn would secure fourth while Aaron Pierce, in the No. 04 LSI/ Sam Pierce Chevrolet Corvette, finished fifth. 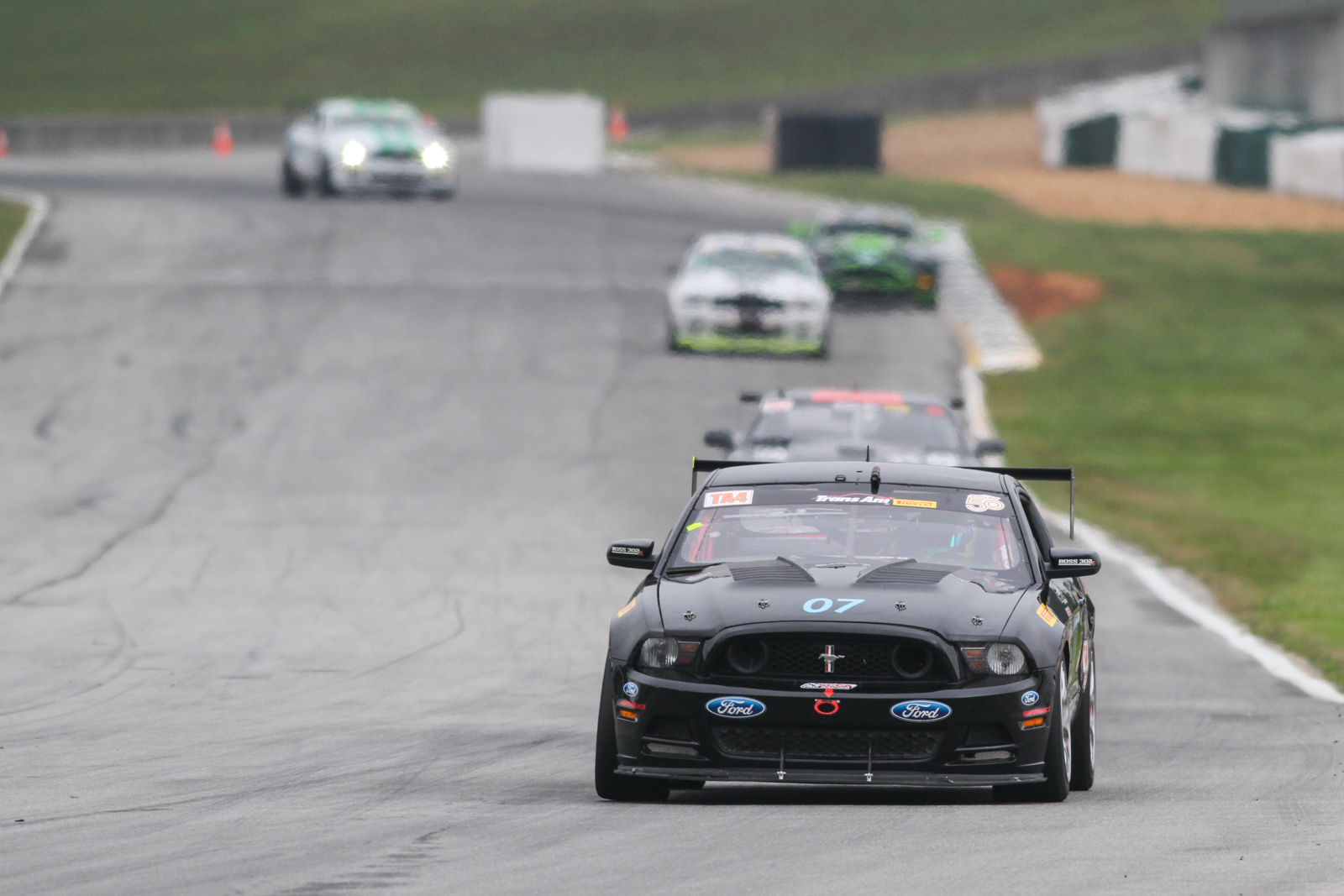 In TA4, Brian Kleeman captured his third win of the year, remaining perfect on the season after starting on pole and leading every lap of the race.  However, Kleeman thinks the race may have been much different had the TA4 field not been split under red flag conditions.

“The red flag actually made it real easy for me,” said Kleeman.  “Unfortunately it split the TA4 field, which I was kind of ashamed about.  We probably would have had a really good race, I could definitely see Todd (Napieralski) was coming in my rear view mirror and I was getting the call on the radio that he was closing the gaps on me so I had to pick up the pace a little bit, but we were definitely burning the front left off the car so I had to take it easy through 12 and through 1 which is where he’d pick up on us—then try and get it all back on the backside of the course.  Without that red it would have been a good race. “

Napieralski, in the No. 39 Chevrolet Performance/ Tremec Chevrolet Camaro, would finish second— also his third podium finish of the year, remaining within striking distance of Napieralski in the TA4 championship points.   Steven Davison, in the No. 2 DaVinci Plastic Surgery Aston Martin Vantage GT4, would finish third to secure his first career Trans Am podium appearance.

The COOLSHIRT Systems Cool Move of the Race was awarded to Phil Lasco, in the TA2 race, for his consistent movement up through the TA2 field and to John Baucom, in the TA, TA3 and TA4 race, for charging from 11th to sixth in TA class over the course of the race.

Again in the TA, TA3 and TA4 race, Kinsland Racing was awarded the Pitboxes.com Crew of the Race for a victorious effort with a minimal crew, with Marty Cathey receiving the Traq Gear Crew Chief award.  In TA2 the same honors went to Mike Cope Racing Enterprises and Travis Cope for their efforts in prepping Tony Buffomante’s No. 34.

The full course red flag during the TA, TA3 and TA4 race was due to the No. 8 of Tomy Drissi being stranded off course in turn six.

The Trans Am Series presented by Pirelli was joined at Road Atlanta by Formula Drift on the weekend, holding Drift Atlanta presented by Papa John’s and Global Time Attack.

Fans can keep up with The Trans Am Series presented by Pirelli at www.gotransam.com, on Facebook at www.facebook.com/gotransam and on Twitter at @gotransam.

ALL RESULTS PROVISIONAL UNTIL POSTED FINAL.